Miss Macee’s morning meeting fills the gaps for students kept out of classrooms. 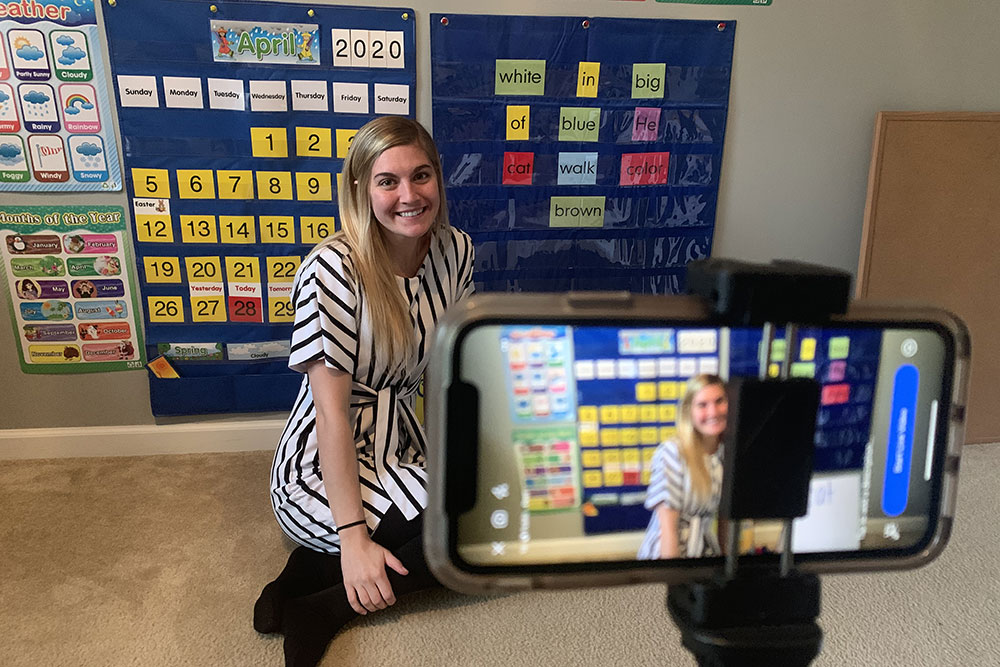 Five days a week, Macee Graham starts off her morning with the weather song, asking the children who follow along with her what the sky is like as she gazes out the window and examines whether it’s sunny, rainy or cloudy. (This being Pittsburgh, it’s usually cloudy).

Still singing in her calm voice, she goes over the months of the year and counts the days on the calendar while reviewing the day’s special number. Later, in conjunction with the day’s lesson, she reads a story aloud.

The pandemic didn’t change that.

The assistant director and classroom coordinator at Allie Alligator Learning Center, which has locations in Warrendale and Cranberry Township, Graham was still interacting with children in a meaningful way, even when she no longer was in a classroom.

In early March, as schools were closing in response to the pandemic, the learning center was still open; Graham began sharing lessons from a classroom via Facebook Live. She called the lessons, which take place at 10 a.m. Monday through Friday, Miss Macee’s Morning Meeting. On Saturdays, she holds a special storytime.

“The first thing I thought of was all the children who would be missing out on their education,” she says. “So I thought I would do a calendar every morning.”

After Allie Alligator closed on March 15, Graham, who has a degree in early childhood education from California University of Pennsylvania, kept her lessons — which include early elementary reading and simple addition — going.

Armed with a calendar she created using a poster board and laminated sticky notes, she began broadcasting her morning meeting from her home. At that point, following positive feedback she received from kids and adults alike, she felt people were depending on her.

“I think a sense of normalcy is very important, and a lot of kids, they just love to learn,” she says. “I wanted to keep that learning environment somehow, even if it’s over the internet.”

As more and more people began tuning in, Graham — to her amazement — had followers inquire if she had an Amazon Wishlist or ask if they could make donations or buy items for her makeshift classroom.

With their support, Graham purchased a large-scale calendar reminiscent of the one at Allie Alligator, flashcards, markers, posters and other supplies. She also bought a camera tripod for her cellphone. Previously, her husband, also working from home during the pandemic, recorded the lessons.

“I was so surprised because that was not why I was doing it. I didn’t do it for that,” she says of the outpouring. “To be given all this stuff for the kids, and to help benefit the kids, it was just a really, really great feeling.”

These days, Miss Macee’s Morning Meeting has about 1,300 followers across 18 states and six countries, including Canada, South Africa, Belgium and Australia. Although some followers are former and current students, more than half are children Graham has never met in person. That hasn’t stopped these new students from telling her their favorite color, or sharing the drawings they’ve made in the Facebook comments.

“I love it because it’s a way I can connect with students I’ve had in the past in school districts, or students we have now, as well as children I don’t even know,” she says.

Following the success of her morning meetings, Graham began offering one-on-one, individualized lessons for students through a website she created, gaining eight elementary-aged students she teaches via Zoom.

Although she returned to work at the learning center on May 18, Graham has continued the Facebook lessons. She also plans to host sessions, likely in a pre-recorded format, throughout the summer.­­

“The thing is, once everyone goes back to school, they won’t need me anymore,” she says with a laugh.