The arts nonprofit leader contracted COVID-19 in March and is recovering from a difficult fight. 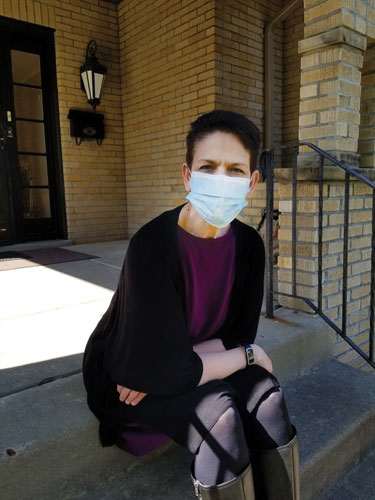 Musician Kristen Linfante has played all over the world, encountering life in a rare, sonorous way. Coming out of isolation after recovering from COVID-19 is an entirely different story.

“The moment that I could give my kids a hug and give my partner a hug, I can’t compare that to anything that I’ve ever experienced before,” she says.

Linfante, executive director of Chamber Music Pittsburgh, is one of the thousands of COVID-19 patients in Allegheny County and one of the more than 370,000 people nationwide who have recovered from the disease.

Linfante and her son traveled to New York City — considered the hotbed for COVID-19 in the United States — in early March for a college visit. As a native New Yorker, Linfante confidently moved throughout the city, hopping on subway cars and seeing shows.

News of COVID-19 began to spread at that time, so Linfante and her son tried to travel with caution.

“We were very, very careful. We had our hand sanitizer,” she says.

By the time they left, New York would not be the same.

The day Linfante and her son flew back to Pittsburgh, Fordham University — the college they visited — closed because of known exposure to students and teachers. Linfante didn’t panic.

Into the second week of March, her son developed a slight cough. He was not tested for COVID-19, and Linfante wasn’t worried since his symptoms were minor and passed after several days.

The same can’t be said for what eventually befell Linfante. She woke out of the blue on the night of March 18 with severe stomach issues.

“At the time, they weren’t even recognizing that could be a symptom,” she says.

By the next morning, she was in the hospital and had quickly developed a high fever and a cough. She was tested and, despite receiving an inconclusive test result, Linfante was presumed positive and told to isolate completely from her family and to only come back to the hospital if she could not breathe.

On top of the huge physical challenge, recovering from COVID-19 was a huge mental challenge for Linfante. She was alone in her home, away from her children and partner — who were living in a separate place to prevent contracting the disease — and unsure of what to do if her fever, cough and labored breathing progressed.

“I literally got into this routine of trying to be in almost a meditative state because every night I would go to sleep thinking, ‘I don’t know if I’m going to wake up tomorrow,’” she says. “That terror, that horror and fear, and also wondering, ‘Will I have time to call 911? Will they get here in time if I reach that point where I really can’t breathe?’”

There were days when Linfante thought she was getting better. There were days when she got worse. Her rollercoaster experience reached its peak on March 30 when she couldn’t breathe. Her oxygen levels were low. Her doctor urged her to call 911 and go to the hospital. But she decided to stay home and do everything she could to fight it.

“I told the nurse on the phone that I wanted to avoid going to the hospital as I had a fear that if I went I would not ever leave,” she says. “I knew I was taking a risk, but I decided I wanted to exhaust every other option and remedy before calling 911.”

She slept for 40 hours over the next two days, only getting up a few hours to move. Three days later, her fever had dissipated. By the second week of April, the worst seemed to be over.

“Slowly I started to feel like I was coming out of it — but it was very, very slow,” she says.

Linfante has now reunited with her children and partner after quarantining for two more weeks after testing negative. Thanks to her health insurance, her emergency bills are relatively low. She’s waiting to get an antibody test so she can donate plasma; since she’s technically still recovering, her doctor recommended she social distance until a vaccine is available.

Linfante says she feels lucky and fortunate to be a survivor; she’s lost friends, colleagues and even a relative to COVID-19.

Although Tylenol, tea and other remedies such as hot showers helped her endure COVID-19, Linfante says her personal strength came from within.

“You don’t want to [fight]. It’s the last thing you want to do. But I really believe that helped me get through,” she says. “That fighting spirit of, ‘I have to get through. There’s so much to do, so much life to live.’”