The veteran WTAE-TV Pittsburgh Action News 4 anchor has been broadcasting from home since March. 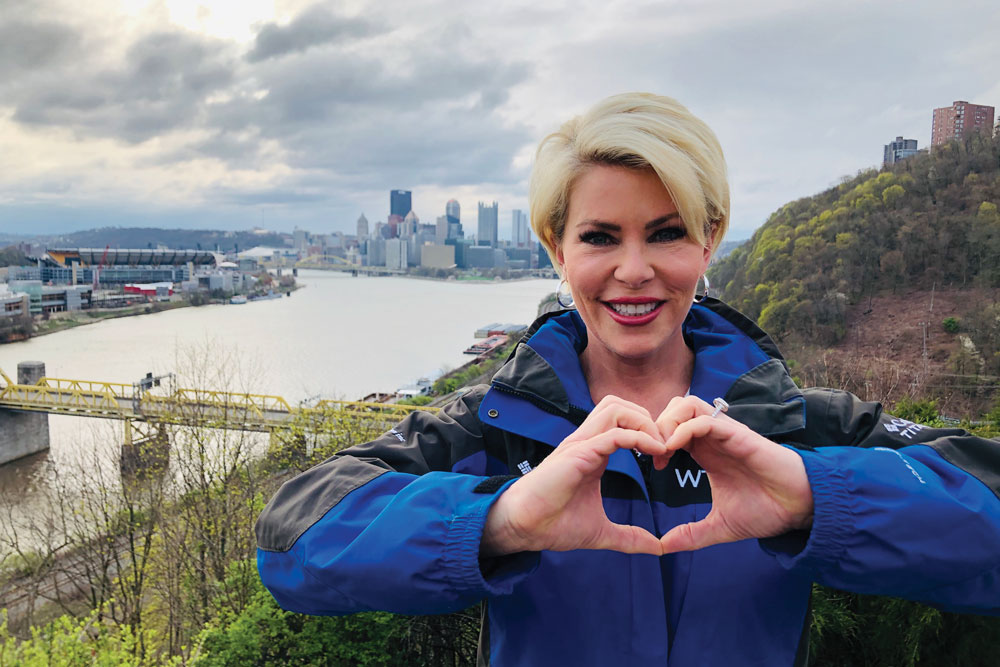 Staying home is nothing new for Kelly Frey and her brood.

Bennett, now 10, was born with Dandy-Walker syndrome — a congenital brain malformation — and hydrocephalus, a combination that causes Bennett to have seizures, as well as major physical and cognitive developmental delays. His care requires round-the-clock monitoring, including help with personal needs, feeding and physical movement.

“It’s a sprint, every day, within a marathon,” Frey says. “I think, being a special needs parent, we joke that we’ve been prepping for this for 10 years. We’re already isolated, we already stay at home and we already get little sleep!”

In mid-March, the breast cancer survivor began broadcasting the morning news from her home. Five days a week — as she did when she was still commuting to the station — Frey rises at 2 a.m. (2:30 a.m. if she says she’s feeling selfish) and pours herself a giant mug of coffee. She dresses in the clothing and the jewelry she laid out the night before and powers up her computer from her bedroom office while Luhn, just a few feet away, tries to remain asleep — sometimes with a pillow over his head.

At WTAE’s studio, an engineer, technical support and lighting staff, among others, are on hand to keep the broadcast rolling. At home, it’s just Frey, aided by speakers, a lavalier microphone and lighting — including, at one point, Marena’s “Frozen” lamp — that she rigged up herself.

“Working from home, I’m doing like seven things,” she says with a laugh.

Although her computer has a program that allows her to use the screen as a teleprompter, Frey still prints out her scripts every morning as a backup in case of a technology fail. While things have gone smoothly for the most part, there’ve been a few incidents. Notably, the tail of her dog, Koda, made an appearance during a live shot.

“My rottweiler gets up every morning with me, and the cat is usually on my foot,” she says.

During the broadcast, Frey also posts her morning COVID-19 updates on social media in an easy-to-read, bulleted format.

“I just wanted to do something like that from the very beginning,” she says. “I thought, ‘What do I want to know?’ And I want to know a little bit of the heavy stuff, the highlights, where to get information, what is some of the fun stuff.”

Although she never let it show on air, and rarely missed a day of work, Frey’s family has recently emerged from a particularly rough period.

For more than two months after Christmas, Frey says they practically lived at UPMC Children’s Hospital of Pittsburgh. Bennett, who hadn’t been feeling well, was losing weight and not sleeping. He eventually was diagnosed as having subclinical seizures.

Although he can eat solid food, Bennett has trouble consuming liquids; keeping him hydrated had become an issue, particularly as he grew. A Mic-Key button for a gastrostomy feeding tube (which Bennett pulled out shortly after surgery — but that’s another story) was installed in his stomach during his hospital stays to help him feel better.

Then, just after Valentine’s Day, Bennett came down with a high fever. His condition quickly deteriorated. In the hospital, he went into respiratory distress, then septic shock. Frey says he tested positive for the flu, although she wonders now if he had COVID-19.

“We almost lost him several times,” she says.

In mid-May, Bennett is feeling much better. Although Frey says her heart breaks for those affected by COVID-19, whether that’s illness, loss of income or an unsafe home, she is loving being able to take a step back and having additional time at home, especially when she can engage in yard work — one of her favorite stress-busting hobbies.

Frey adds her husband, a pilot with the 171st Air Refueling Wing, the Air National Guard Unit located in Coraopolis — who is tentatively set to retire in July —  is guiding Marena, 9, through online schooling. With deployments taking him away for sometimes months at a time, he also is extra appreciative of family time, Frey says.

“Every day, every single day, is a joy, no matter what it entails, as long as we’re home,” she says.