The West View florist was allowed to resume business just in time for Mother’s Day deliveries but now wonders what comes next. 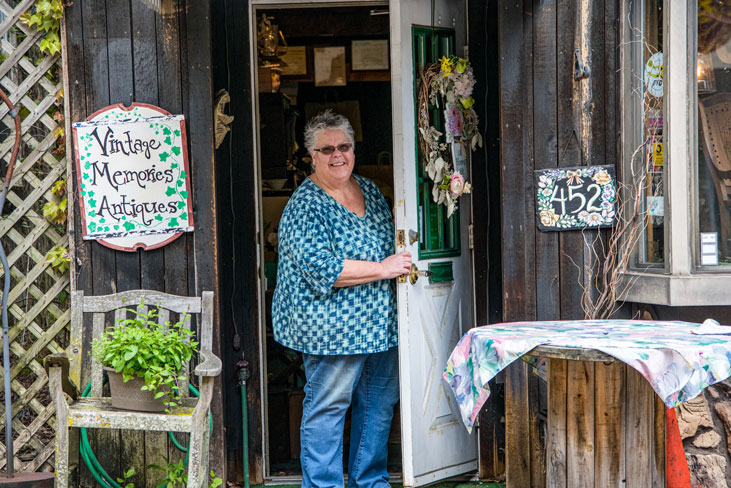 Beth Schellhaas likes to be busy. With weddings on Saturdays and funerals coming at any time, her work weeks normally spills into weekends.

Then normal went away.

“We shut down the 13th of March — Friday the 13th — and only came back May 4 as a non-contact delivery operation,” she says. “It was a weird feeling going from seven days a week and working all of the time into nothing.”

Schellhaas has worked at the West View Floral Shoppe on Perry Highway since her mother, Marilou, opened the business in 1976.

“When I was a kid, my mom had a craft and sewing room. And my dad, being a funeral director, would bring flowers home that they didn’t take to the cemetery. She always wanted to open a flower shop.”

Within days of March 13, Schellhaas knew she had too many fresh flowers and no one to buy them.

“Everything I had in the cooler I gave away. I put them out the sidewalk.”

Fortunately, with Easter around the corner, not all of it went to waste.

“We normally provide palms for 12 churches for Palm Sunday. I had the palm in the shop, so I cut it and put it out in buckets. I don’t know how many people came to get the palms.”

“This one lady was in a housing plan of patio homes, she told me that with masks and gloves on, they had enough palm to distribute through the neighborhood, and on Palm Sunday at noon, they all came out and waved the palms. That made me feel really good.”

Schellhaas says the early days of the shutdown were confusing. Talking with other florists, she considered seeking a waiver to resume deliveries.

“Everybody’s waiver I saw looked different. One person’s looked like it was on letterhead from the state with the Governor’s and Dr. Levine’s signatures on it. Somebody else’s was just an email that stated you didn’t need to close. Well right on the state’s website it says, florists, no.”

So she waited, watching a lot of Netflix and spending time with her son, daughter-in-law and two grandchildren.

“We’re all in the same house so there was always some motion going on. I was really lucky because I know some people who were home alone; for me, it was never boring.”

On her second try, she got a loan from the Payroll Protection Program. Finally came clarification from her state representative that she and her longtime employee, Cathy, could resume operations.

“Adam Ravenstahl’s secretary got a verification for non-contact deliveries for Mother’s Day,” she said.

The next challenge was finding flowers to sell.

“The flower farms had no one to sell to so they were literally mowing down acres of flowers because they couldn’t sell them … it’s hard to get availability now because things are just coming back around. I had to order flowers before I knew if I would be able to open, just so I would have them.”

Schellhaas went to work with what she could get.

“We turned down a lot of orders because of what was available and how many we could get done.”

Her son Cory, who works for the family-owned Schellhaas Funeral Homes, and grandson Brant did all of the deliveries wearing masks and gloves. Some of her customers helped to ease the Mother’s Day crunch by waiting until Monday for their flowers.

Now, with one of the busiest days in the floral business behind her, Schellhaas wonders what’s next. Without proms and between smaller gatherings for weddings and the financial burden many people are facing, she’s certain her business will slow. Yet she has a lot of faith in her customers.

“I had a lady call today and she said, ‘I want to send flowers. I really don’t need to but I want to support you.’ That was very nice.”