There will be some exemptions to the rule. 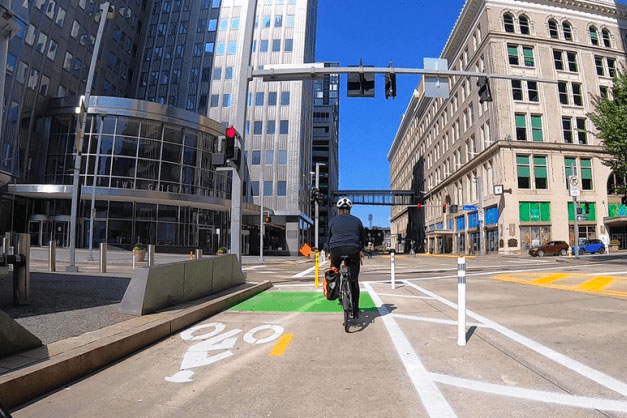 PHOTOS PROVIDED BY CITY OF PITTSBURGH

It’s official: Pittsburghers can no longer park in bike lanes.

Councilman Bobby Wilson proposed the legislation at the end of November, hoping to address the concerns of BikePGH and other cyclists in his district. The idea was that bike lanes would be added to the list of places forbidden to cars by the city’s municipal code.

Currently, there’s no language specifically forbidding parking in bike lanes, and without an amendment on the books, the city would first have to install hundreds of “no parking” signs around every bike lane before the Parking Authority could ticket offending vehicles.

But on Tuesday, City Council announced that the ordinance was unanimously passed; bike lanes will join tunnels, bridges, railroad tracks, crosswalks and sidewalks on the list of places in which parking is prohibited.

Parking in bike lanes poses a threat to cyclists. BikePGH’s advocacy director Eric Boerer told Pittsburgh Magazine last week that when cyclists have to exit the bike lane to swerve around parked cars, they often have to exit into oncoming traffic.

“Parking in bike lanes is a problem, first and foremost,” Boerer said. “It just creates a really dangerous situation.”

When the legislation was introduced a couple weeks ago, other councilmembers expressed concern about people with disabilities and places in which parking is incredibly limited. Some places, they argued, rely on bike lanes for parking during special events, like Sunday Mass.

Councilman Ricky Burgess cited a church on East Liberty Boulevard, which he believed relied on bike lanes for parking during its services. Boerer added that this is the case at a church on East Street on the North Side, too.

But several exemptions were made through amendments to the legislation, including forgoing the no-parking rule for people with disabilities who may need to park closer to their destination than the city’s parking infrastructure otherwise allows.

The amendment also established that the director of the Department of Mobility and Infrastructure would be allowed to make additional exceptions, and clarified that signs would be posted at those locations detailing the exceptions in place. Officials added that the director could also grant exemptions for area churches like those in East Liberty and on the North Side, if the parking ban proves to be problematic for congregants.