The legislation would revise the municipal code to include bike lanes in the list of restricted spaces like on sidewalks, in crosswalks and in front of garages. 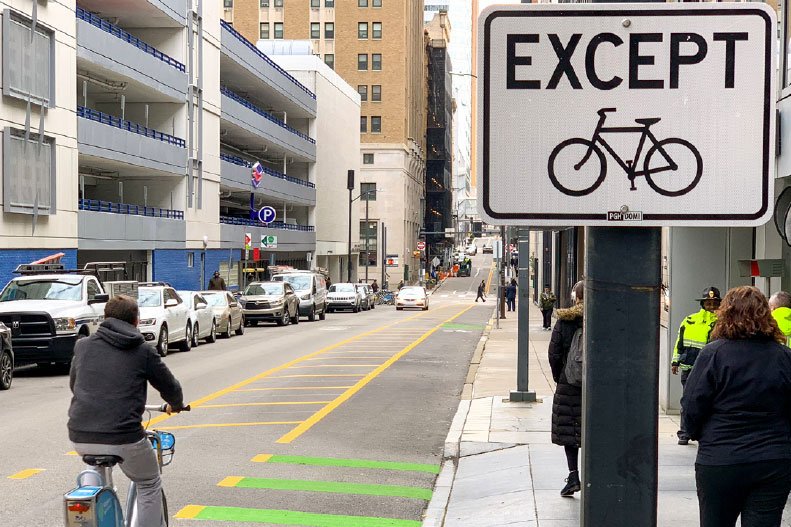 Over the last few years, Pittsburgh has seen a general uptick in bicycling — and a comparable rise in biking-related accidents like the recent death of cyclist William Theisen, who was struck by a car in Highland Park on Nov. 20.

In an effort to make the roads safer for everyone, Pittsburgh City Council is considering legislation that would make it illegal for cars to park in bike lanes.

Councilman Bobby Wilson, at the request of Bike Pittsburgh and cyclists in his district, introduced legislation that would revise the city’s municipal code, making it easier for police and parking enforcement officers to crack down on the practice.

Despite popular belief, there aren’t actually any policies on the books prohibiting drivers from parking in bike lanes. The city code already restricts parking on sidewalks, in crosswalks and in front of garages, for instance, and so vehicles committing those infractions can be ticketed whether there’s a posted “no parking” sign or not.

But without an official revision to the municipal code, the city would have to post “no parking” signs around every bike lane to enforce the policy. Adding it to the code, however, would reduce the amount of new signs needed by adding bike lanes to the list of restricted spaces.

“As the bike lanes expand, it’s silly to need to add signs all over the place, because it’s a waste of time and money for the city,” says Eric Boerer, advocacy director at Bike Pittsburgh. “I would rather see them use those ‘no parking’ signs in strategic areas, where maybe there’s a problem.”

The trouble, some say, is that Pittsburgh’s parking situation is already incredibly limited, especially within neighborhoods like Downtown, East Liberty and the South Side. Some streets are so narrow that residents have to park on the sidewalk, or they’ll obstruct the road and prevent passing cars from getting through. In other areas, bike lanes are the only open space in which cars can park.

According to the Tribune-Review, Councilman Ricky Burgess cited a church on East Liberty Boulevard, which uses what he believes is a bike lane for parking during Mass.

“If they did not have that parking, there would be nowhere for the congregation to park,” Burgess says in the article.

But according to Boerer, that’s a bit of a misconception.

“There was a proposal last summer to redo East Liberty Boulevard that would replace some of the parking for bike lanes, but that never happened,” he says.

He adds that when the bike lane was installed on the road in 2008, the construction also created additional parking that was not there before.

But that’s not to say such circumstances never occur. Boerer adds that on East Street in the North Side, individuals do have to park in bike lanes to attend neighborhood church services. For these types of situations, Bike Pittsburgh supports exceptions to the rule.

“The idea with this legislation is that no parking in the bike lane is the default. That’s the normal thing,” he says. “But if that’s the situation where a church absolutely needs that parking, let’s work with them. Let’s figure out a way to make it work with everybody.”

Council members also discussed possible exemptions to the bike lane parking ban for people with disabilities and some churches, and Councilman Bruce Kraus also said that on some streets, like Downtown’s Grant Street, there are already signs permitting parking in the bike lanes on Sunday to accommodate a local church.

But still, advocates for bike lanes say parking in them poses a grave danger to cyclists, who would have to swerve around parked cars and into moving traffic to avoid the obstacles in their paths.

“Parking in bike lanes is a problem, first and foremost,” Boerer says. “The Penn Avenue bike lane is a two-direction bike lane on a one-way car street, so when you have to exit the bike lane, you may have to exit it into oncoming traffic. It just creates a really dangerous situation.”

Cyclists, like drivers, also have to navigate the city’s notoriously narrow roads, some of which aren’t large enough to accommodate bike lanes without hefty construction endeavors. But where bike lanes do exist, Boerer says they can help solve a slew of problems by simply separating bikes and cars — as long as bikes stay in the bike lane and cars stay out of it.

“You’re on a bike, you often can’t ride as fast as a car can drive, and so having separate facilities for each just makes the street clearer and just adds clarity to where people are supposed to be,” he says. “It just eliminates a lot of the conflicts you see out there … When everybody has their piece of the road, there’s peace on the road.”