Our 50 Years: Why This Movie Landed on Our Cover

Hollywood could be found on the Mon, quite literally, in 1993 — leading to some fawning coverage of the mostly forgotten (but very, very Pittsburgh-centric) action flick “Striking Distance.” 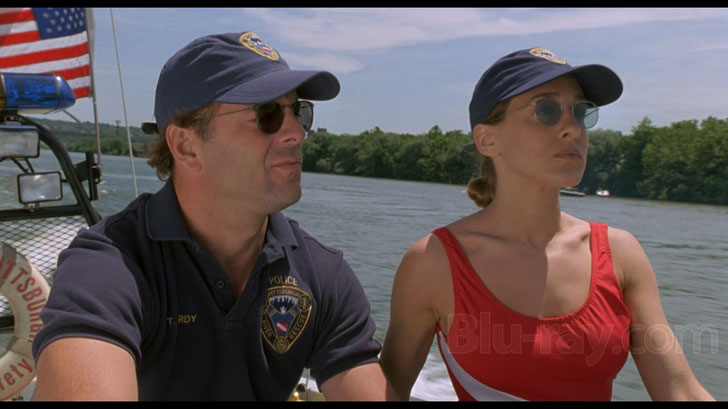 A key distinction propelled locally shot action flick “Striking Distance” to our cover in October 1993. Few ’Burgh-made movies get such marquee treatment; it’s an honor we haven’t bestowed in at least a decade, despite the 21st-century boom in production. “Striking Distance,” however, was something new: a movie shot in Pittsburgh that was supposed to take place in … Pittsburgh.

Writer Harry Kloman, a film critic and longtime Pittsburgh Magazine contributor, wrote in his article that the Bruce Willis actioner was “the first locally filmed mega-production to feature Pittsburgh prominently in the plot.” It was even slated to be titled “Three Rivers,” until a late change from Columbia Pictures gave it a more typical ’90s action name.

There was fear that more than the title would change when additional scenes, to flesh out the plot, were scheduled. “These reshoots — common in big-budget Hollywood movies — provoked gossip that the movie’s Pittsburgh element would be axed along with its original title,” Kloman said.

As anyone who has seen the dark, madcap picture knows, “Striking Distance” is very, very Pittsburgh — mostly due to the film’s director, Rowdy Herrington, a Pittsburgh native who helmed “Road House” four years earlier. “Herrington wanted to parlay his Hollywood success into a movie about the place where he grew up,” Kloman said. “So the shootouts and chases take place on Bigelow Boulevard in Oakland, in the Armstrong Tunnel under the Bluff, on the 16th Street Bridge and on the city’s three rivers, all identified by their real Pittsburgh names.”

Based solely on its cinematic merits, “Striking Distance” is undoubtedly fun; it’s made all the more enjoyable for Pittsburghers, however, by innumerable local nods and appearances (look for Sally Wiggin and Ken Rice delivering fictitious newscasts). Unfortunately, it wasn’t a hit; while it opened atop the box office on Sept. 17, 1993, it descended the charts in a hurry, ultimately grossing a feeble $24.1 million.

In that regard, our breathless “Striking Distance” coverage seems a bit over-the-top. But in reviewing the cover story, I’ve concluded that the feature was justified — by a delightfully detailed account of Bruce Willis’ trips to Kennywood. 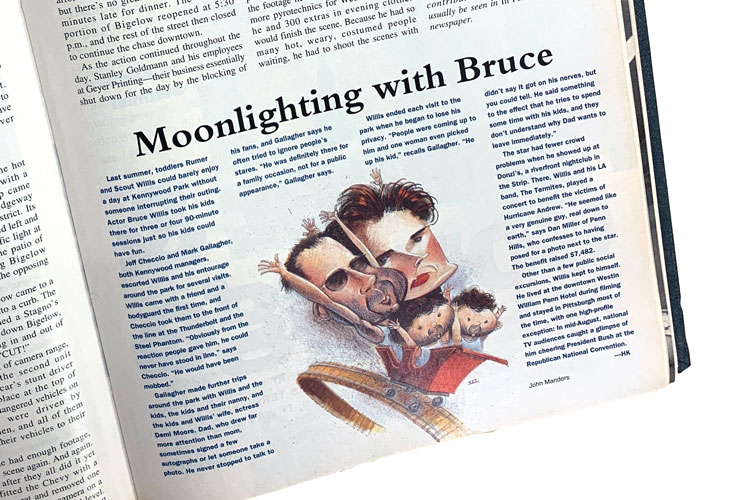 I’m obsessed with the fantastic caricature, by illustrator John Manders, that accompanies the feature. Note that young Rumer and Scout Willis are shrunken versions of their dad, complete with five-o-clock shadows and “Die Hard” tank tops.

The sidebar reveals the Willis family were hounded by local fans at Kennywood. “People were coming up to him and one woman even picked up his kid,” according to former Kennywood manager Mark Gallagher. “He didn’t say it got on his nerves, but you could definitely tell.” Nevertheless, the Willis clan kept trying to make Kennywood memories: “Gallagher made further trips around the park with Willis and the kids, the kids and their nanny, and the kids and Willis’ wife, actress Demi Moore.” (Yes, that gigantic head in the illustration is meant to be his former wife Demi Moore.)

A note to star-struck Pittsburghers: If any celebrities are trying to enjoy a day at Kennywood, leave them be — and certainly don’t manhandle their children. Reserve your stargazing for more appropriate opportunities. A charitable function, perhaps?

“The star had fewer crowd problems when he showed up at Donzi’s, a riverfront nightclub in the Strip. There, Willis and his LA band, The Termites, played a concert to benefit the victims of Hurricane Andrew.”