At the conclusion of the 20th century, we ranked prominent Pittsburghers. This year, we did it again (a bit differently). So who climbed the charts over the past 20 years? 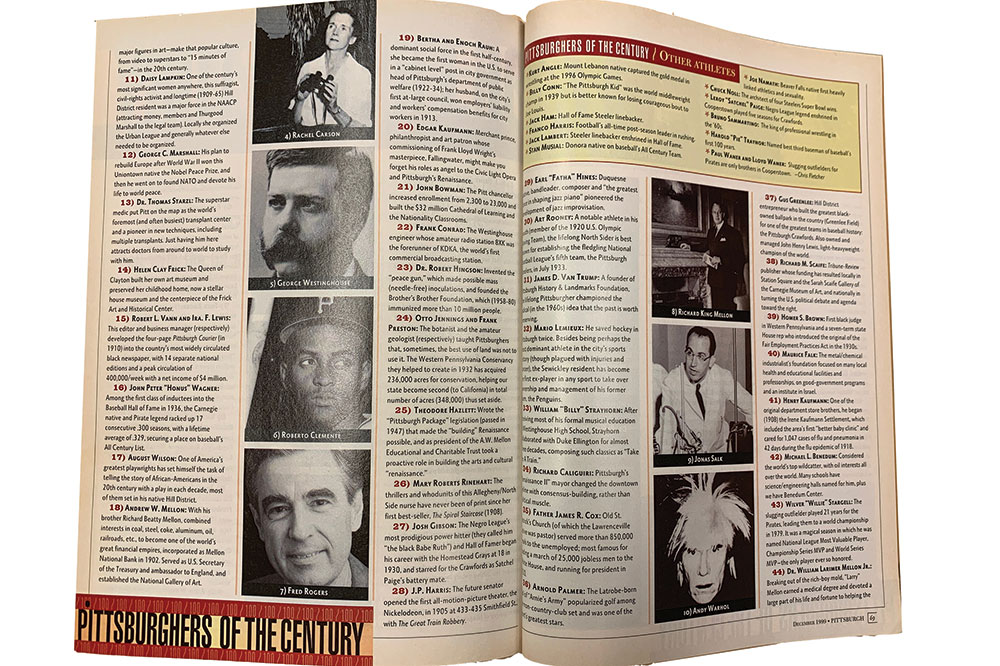 In January, we kicked off our golden anniversary year by ranking the 50 Greatest Pittsburghers Of All Time. That was not, however, the first time we created a big ol’ countdown of notable locals.

We’re a magazine. Magazines make lists of things. We’re not reinventing the wheel over here.

Twenty years ago, we marked the end of the 20th century by naming the 100 most influential Pittsburghers of the century. Two important distinctions: first, the December ’99 story cited influence, not our modern-day (and admittedly fuzzy) concept of greatness; second, the old list was solely focused on the 20th century. Mary Schenley and Stephen Foster: Take a hike!

The editors of ’99 took the distinction seriously, noting that, for their purposes, “Andrew Carnegie is judged not as a steel mogul (he ended that in 1900) but as a philanthropist of the 20th century.” That didn’t stop him from maintaining a lofty position: Andy landed at #3 in ’99.

He would defend that position; Carnegie was third on our list as well. Rachel Carson also maintained her reputation very well over the past two decades; she was #4 then, she’s #4 now.

Fred Rogers rose from a seventh-place finish to become our top-ranked ’Burgher. Absence makes the heart grow fonder, perhaps? “His show, seen by some 6 million viewers a week, helps children deal with difficult issues and has spawned generations of jazz lovers,” we wrote back then.

I know he had a lot of musicians on, but was “Mister Rogers’ Neighborhood” ever known primarily for jazz?

Anyway: August Wilson charged up the rankings, landing at #17 in ’99 and #2 this year. Jonas Salk was elevated as well, from #9 to #5. Andy Warhol made a four-spot jump, from the 10th spot to #6: “Love him. Hate him. You can’t ignore the stature of this Oakland native and Carnegie Tech grad as one of the major figures in art … in the 20th century,” we wrote. I have to ask … who the hell hated him? Were there angry classicists occupying the Pittsburgh Magazine offices 20 years ago?

The top selection in ’99 was H.J. Heinz; he sank to the 10th spot on our list. In justifying the ranking, the editors noted that the Heinz factory was “still on the North Side,” and the company maintained “headquarters in Downtown Pittsburgh.” I’d conclude that the departure of Heinz activity from the region has lessened the legacy of the man himself — by nine whole places! Henry, you should’ve stipulated permanent Pittsburgh headquarters in your will!

His fate is nowhere near as ignominious as that of Richard King Mellon, who ranked eighth in the ’99 list — and didn’t make our cut at all. Back in the ’90s, we lauded his Pittsburgh Renaissance-era contributions: “We can also thank him for Mellon Square downtown … and Mellon Park in Shadyside.” Yeah, but what have you done for us lately?

And to the readers who remain angry that a certain dinosaur-dodging, alien-fighting actor didn’t make the cut in our recent list, I’ve got bad news: We didn’t even find room for Jeff Goldblum when we ranked 100 Pittsburghers. And this was only six years after “Jurassic Park” hit theaters. I think he could have easily supplanted, say, pyrotechnic maven George Zambelli at #84, but I wasn’t here to argue in ’99.

This article appears in the November 2019 issue of Pittsburgh Magazine.
Categories: Community Feature, From the Magazine, Hot Reads, Then/Now