We’ve always sought to quantify and predict where Pittsburghers will live. That doesn’t mean we’ve been able to. 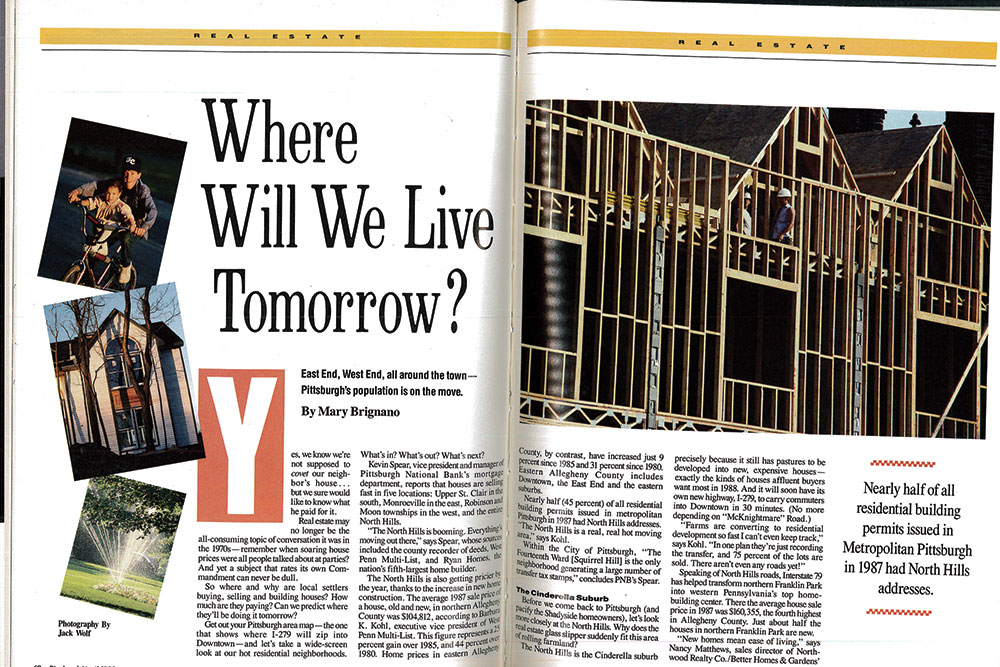 I can’t help but notice that our April 1988 cover feature begins with a question, not a statement.

The article, by Mary Brignano, has a query for a title: “Where Will We Live Tomorrow?” It is not “Where We’ll Live Tomorrow,” because … well, we didn’t really know. We had some idea — albeit with much less exhaustive research and revealing data than our current analysis of suburban communities  — but our feature spent much more time noting where Pittsburghers had moved than trying to guess where they might move in the future.

For example: “Nearly half of all residential building permits issued in metropolitan Pittsburgh in 1987 had North Hills addresses,” we reported, which quite precisely explains how I ended up spending my childhood in Ross Township. The North Hills was booming then (as it largely is now), along with a number of traditionally thriving suburbs: “Houses are selling fast in five locations: Upper St. Clair in the south, Monroeville in the east, Robinson and Moon townships in the west, and the entire North Hills.” And that’s why we still have big shopping malls in those places today.

Unlike this month’s feature, the ’88 version was not focused solely on the suburbs; it was meant as a snapshot of life throughout the region. There just wasn’t a whole lot going on within the city limits. Squirrel Hill was the only city neighborhood experiencing notable growth; in other words, if you had picked up that issue and immediately invested in Lawrenceville real estate, you would probably be a minority owner of the Steelers by now.

The piece quotes Realtor Nancy Matthews, in praise of a trend toward new construction in the region. “Buyers want the amenities new construction offers — a jacuzzi in the master bedroom, skylights, cathedral ceilings, large open foyers, large bathrooms, and laundry rooms on the first or second floor.”

I would assume this to be a bizarre, ultra-local predilection among Matthews’ clientele were it not for the ad for a whirlpool by Kohler that appears on the next page. The “Infinity∞Bath” (yes, the infinity symbol was actually part of the name) was pitched as “The first bath luxurious for one, spacious for two. No spout, making bathing much more pleasant and safe.” That’s right: It’s the perfect tub for the homebuyer who wants awkward, soggy romance near the nightstand but is also worried about bumping their head on the spigot.

As for the predictions: We were certainly good at knowing where people would not be headed in the ’90s. “Communities that will lose people … are Braddock, Neville Island, Clairton, McKees Rocks, East Pittsburgh, Wilmerding, Glenfield and McKeesport.” Yup. Nailed that one.

But could we predict were people actually would live in the future?

“Agent Lee Goldblum predicts that the Strip District along the waterfront will be Pittsburgh’s hot new residential neighborhood.”

Not yet, Lee. We keep hearing it’s about to happen, though. Maybe your prediction was just 30 years too early? (And are you related to Jeff?)

This article appears in the October 2019 issue of Pittsburgh Magazine.
Categories: Then/Now