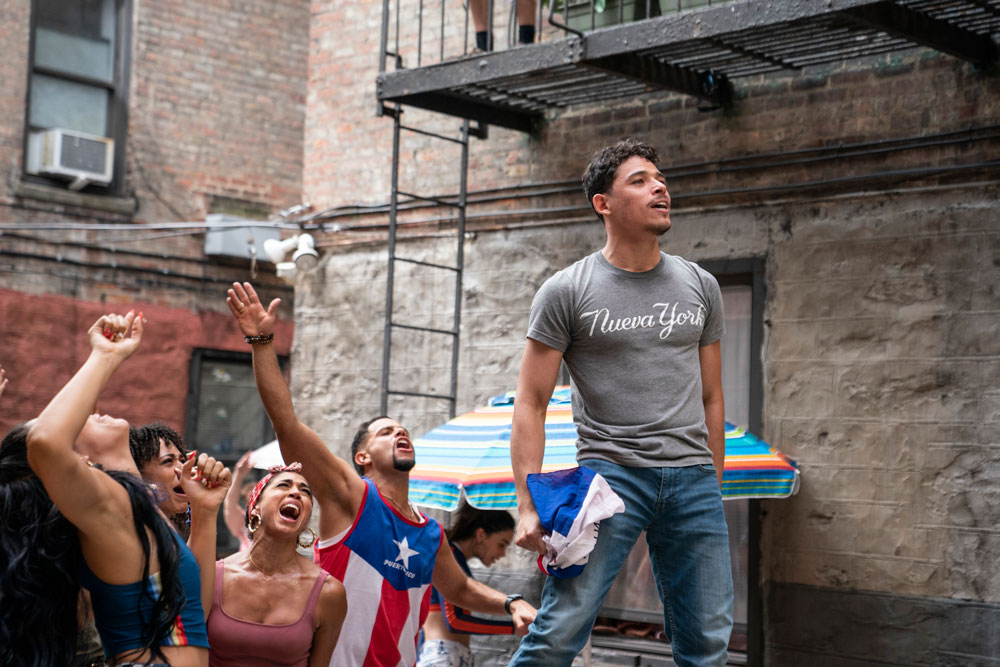 Joy has been missing at the cinema.

For a year and a half, we’ve been living in particularly joyless times. Dropping a celebratory, triumph-of-the-spirit kind of flick six or eight months ago likely would not have been a salve — it probably would’ve been a bitter pill, a reminder of what was missing.

So it made perfect sense that studios held their most boisterous and beautiful creations for sunnier times. And it made further sense that, during the recent transitional months, slightly darker-hued movies — “Cruella,” “Godzilla vs. Kong,” “A Quiet Place Part II” — ably reflected the somber, pandemic-hardened audiences that were tentatively returning to cinemas.

Now, however, it is as though we have license to feel joy again. And this week, joy will be perfectly returned to movie theaters by “In the Heights,” the first great post-COVID movie and one of the great movie musicals, bar none.

Long before conquering the planet with “Hamilton,” Lin-Manuel Miranda was known for “In the Heights.” The multi-hyphenate theater icon first wrote a version of the story as a 19-year-old theater student; it was developed into a Broadway smash, winning the Tony for Best Musical. A film version of “In the Heights” has been in development since at least 2008.

When the adaptation process began, Miranda was an upstart. Had the film been made in the pre-“Hamilton” era, he might’ve starred as Dominican-born, Washington Heights-bred bodega manager Usnavi; he originated the Broadway role and was Tony nominated. If anything, original studio Universal — the property was kicked around, winding up with Warner Bros. — may have decided Miranda wasn’t prominent enough for the role.

Now, of course, he’s too big for it. Miranda’s in the movie, as a devilish street vendor, but Usnavi is played by Anthony Ramos, another “Hamilton” vet. Ramos is perfect, a soulful dreamer restrained by uncertainty. Calling it a star-making performance is both reductive (Ramos is already something of a star) and insufficient; this isn’t just a star turn, it’s an explosion.

Usnavi’s “sueñito,” as he puts it, is a “little dream” of reviving his late father’s beachside bar in the Dominican Republic. He’s not the only one looking to move on from the energizing but rapidly gentrifying neighborhood. His unrequited crush, Vanessa (Melissa Barrera), is hoping to move downtown and begin a fashion career. Salon owner Daniela (Daphne Rubin-Vega) is relocating to the Bronx, priced out of her longtime storefront. Usnavi’s employee and cousin, Sonny (Gregory Diaz IV), dreams of college and social-justice marches.

Meanwhile, Nina (Leslie Grace) has already left. After a dazzling high-school career, she’s enrolled at Stanford, to the delight of her father (Jimmy Smits), even if he’s slowly dismantling his cab company to pay for her education. Unfortunately, she’s finding it difficult to acclimate, a personal failure she’s loath to admit to her proud family and neighbors.

Like any good story about a vibrant neighborhood, it’s difficult to account for all of the vital characters; the above list doesn’t even cover all the principals. As “In the Heights” unfolds over the course of a scorching-hot, pivotal weekend, the challenge will not be for Usnavi and company to chase their dreams. Rather, it will be to understand, honor and confront them; this is not a story where the struggle is outward. This is an internal movie — both inside the self and inside the home.

Thoughtful and existential though it can be, however, “In the Heights” is more of a celebration than a meditation. The adaptation is dynamically, vibrantly, precisely directed by Jon M. Chu (best known for “Crazy Rich Asians” and soon to tackle another Broadway hit, “Wicked”). Chu turns the bones of the film — the movement of the camera, the shape of the spaces, the way light and shape unfold — into fellow characters, dancing and singing with the cast.

Eventually, he’ll bend gravity itself to allow for a breathtaking dance on the side of a brick wall. (That’s the moment when I knew “In the Heights” would get a Best Picture nomination.)

The film is remarkable. “In the Heights” is as enjoyable an experience as any in recent memory, injecting audacious light into the musical genre. See it on the biggest screen possible, preferably in a theater outfitted with speakers that can rattle your bones.

You want this movie to overwhelm you. That’s what it did for me.

“In the Heights” opens in theaters this Friday, June 11. It will also stream on HBO Max for a month, beginning the same day.