While only a must-watch for NBA fans, the basketball drama is an easily compelling sports flick. 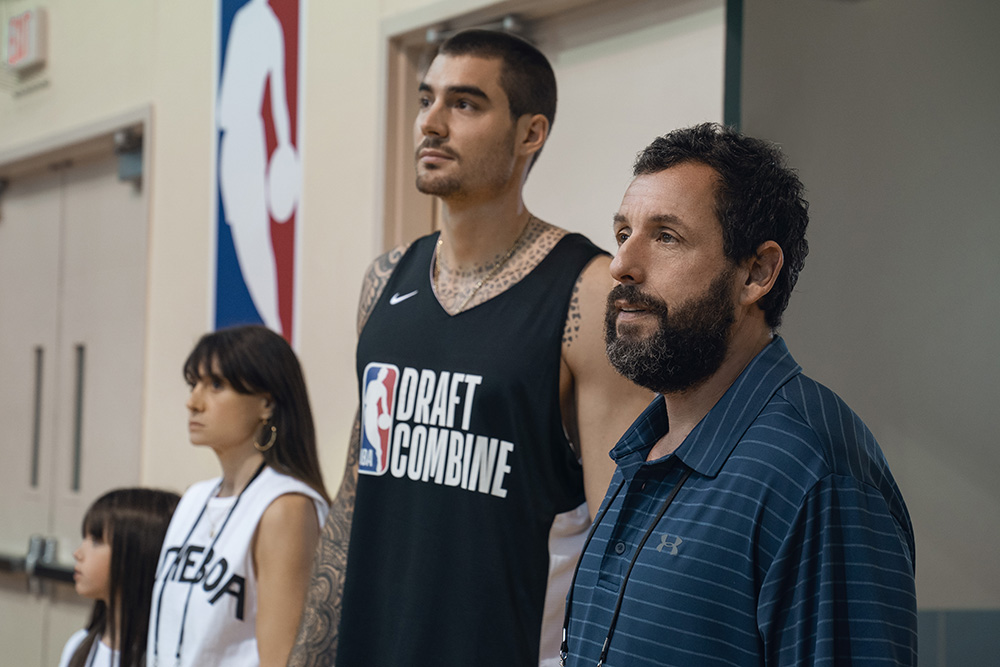 It holds more appeal for NBA diehards than the general public, but “Hustle” is fundamentally an unabashed, feel-good sports movie. The chords it strikes are expected but sharp and satisfying.

To amp up the rooting interest, the film — directed by up-and-comer Jeremiah Zagar — places two rags-to-riches stories parallel to one another. Long-suffering Philadelphia 76ers scout Stanley Sugerman (Adam Sandler) needs to find a diamond in the rough to earn a coaching spot. He discovers a towering talent, Bo Cruz (Juancho Hernangómez of the Utah Jazz), hustling streetball players in Mallorca.

Unfortunately, Sugerman is under the thumb of an arrogant new owner (Ben Foster), who doesn’t have much faith in the raw rookie. Convinced of his protege’s potential, Sugerman brings Cruz back to Philly on his own dime, hoping to turn the young man into an all-star.

After a fun opening act, “Hustle” gets bogged down; more than an hour passes before the central conflict emerges, as Cruz shows signs of an anger issue that threatens to sink his career prospects. When that turn finally occurs, though, the stakes are infectious; even those without any interest in hoops won’t be able to resist rooting for Cruz’s dreams and Sugerman’s redemption.

A strong, funny cast helps; Sandler is always at his best when he’s trying to be wry rather than goofy, and Queen Latifah, as Sugerman’s beleaguered wife, graces the production with stabilizing influence. A brief appearance from Robert Duvall is also welcome.

All in all, it’s a perfectly acceptable film — and it rises to appointment viewing if, like me, you’re an NBA fan. Every on-screen basketball player is portrayed by a pro (Anthony Edwards handles himself quite well as a rival to Bo), and cameos abound, from contemporary stars including Trae Young and Tobias Harris to bona fide legends. Seriously; Dr. J is in more than one scene. What more do you want from an easy streaming flick?

“Hustle” is now streaming on Netflix.