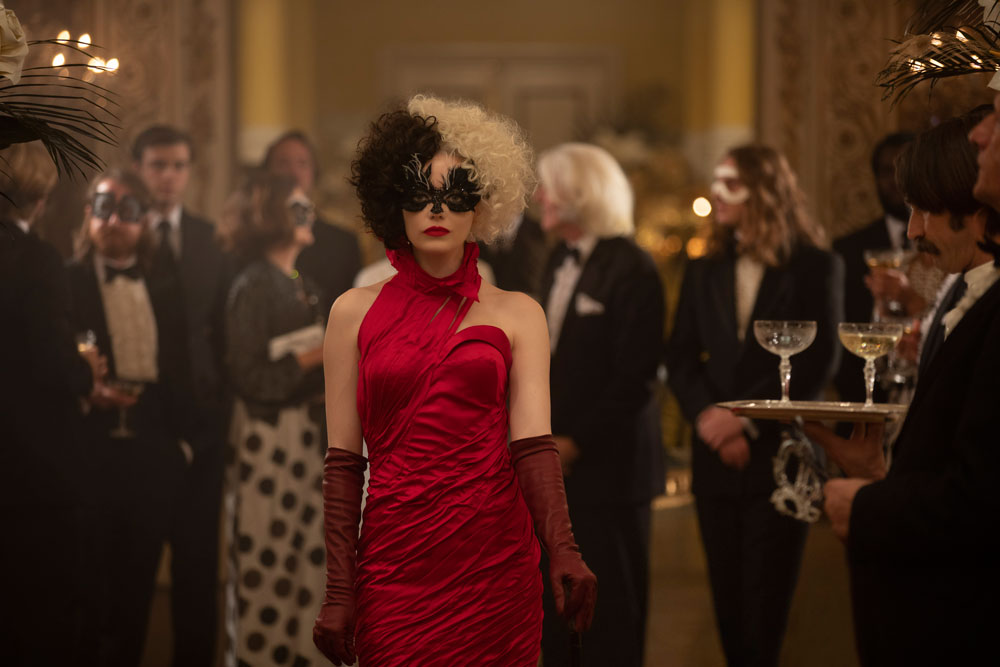 “Normal is the cruelest insult of all,” purrs Cruella de Vil (née Estella) in her live-action origin story. She’s talking about her desire to stand out in the world of fashion — yes, this movie is mostly about a bitter couture rivalry — but the sentiment seems to have been a guiding philosophy for the filmmakers as well.

They’ve made a very abnormal Disney movie, one that eschews normal plotting and clear delineation of good and evil. In some ways, that’s a good thing; “Cruella” is certainly a welcome break from the same-again reboots Disney has been producing as of late. Although it is ultimately a somewhat odd and unsatisfying experience, that’s not enough to ruin a good time.

I am shocked, however, that Cruella has been retconned into a dog lover. It takes chutzpah to turn a character previously known by her lust for puppy fur into a non-violent jester with multiple canine sidekicks.

Inasmuch as our antihero — played by a gleefully overacting Emma Stone — has any problem with four-legged creatures, it’s a slight distrust of dalmations. A pack of the spotted dogs killed her mom (Emily Beecham), you see; it wouldn’t be a Disney movie without a dead parent. At the time, young Estella was being raised by a single mother; during a mysterious meeting at the imposing home of the wealthy fashion designer Baroness von Hellman (Emma Thompson) a trio of dalmations rushed dear old mom, sending her tumbling over a cliff.

Orphaned, Cruella fell in with a pair of pint-sized grifters. The trio grew up as an unlikely family, picking pockets while Estella nurtured dreams of a life in fashion, the result of an ongoing obsession with the Baroness. In adulthood, her compatriots — played by Joel Fry and Paul Walter Hauser — scheme to get her a foot in the door at the Baroness’ fashion house, where she begins a “Devil Wears Prada”-esque ascent.

Somewhere along the way, Estella adopts an alter ego — the one in the title, obviously — and begins a series of mischievous stunts designed to pull attention away from the increasingly stodgy Baroness and onto her own sartorial creations. In the movie’s most memorable look, Cruella sports a painted mask with the phrase “The Future” outlined on her face in ransom-note writing, a look equal parts cool and cloying.

Moments like these are why a joke going around social media calls the movie “The Joker Wears Prada.”

“Cruella” spends a long time in search of its point — for more than an hour, it is simply about a lost necklace — and has more than its share of extraneous parts. Director Craig Gillespie (“Lars and the Real Girl,” “I, Tonya”) creates some memorable sequences and keeps things lively with dozens of British-Invasion needle drops, but he’s working against an overcooked script. (The unwieldy nature of the story might be the result of an odd mashup in the writers’ room — the credited writers are romcom vet Dana Fox and “The Favourite” co-writer Tony McNamara.)

The film might have faltered but for the irresistible tête-à-tête at its core. The two Oscar-winning Emmas going (very gracefully) at one another’s throats is more than enough entertainment for this or any script; the moment the pair was cast and placed in truly immaculate costumes, “Cruella” became a winner. It will likely be remembered more for its style and sniping than its story, but those elements are just enough to stitch the whole thing together.

“Cruella” opens in theaters on Friday, May 28, and will be available (for an additional fee) via streaming on Disney+ the same day.