Marilyn Monroe deserved a filmmaker who understood (or at least respected) her, not this misfire of a biopic. 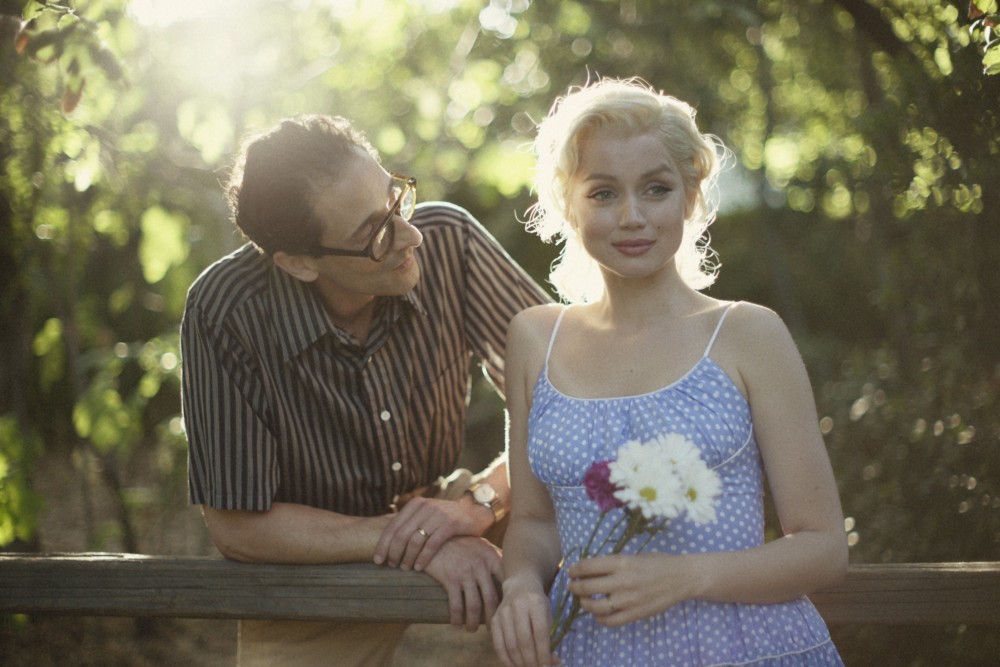 You will gain more insight into the life and times of Marilyn Monroe by half-listening to “Candle in the Wind” at the supermarket than you will by watching “Blonde.”

Admittedly, that’s not really the film’s goal. Writer/director Andrew Dominik merely uses Norma Jeane — abuses her, disrespects her and discards her — to make a half-formed, interminable argument about addiction, celebrity and violence. He seems to have precisely two things to say about the icon: Her parents and upbringing messed her up, and she regarded Marilyn as a character she was playing.

Do you know, the movie seems to ask, that Marilyn Monroe was a mess? Yes. We do. Babies are born knowing that. It’s in our cultural DNA. “Blonde” merely reminds us of that in brutal fashion.

What a waste of three hours.

Ana de Armas plays Monroe in a story that hops from one terrible moment in her brief life to another. “Blonde” is uninterested in her successes. Her shrewd conquering of a resistant movie industry is ignored; her dedication to acting is treated like an affectation; several of her most indelible roles are mentioned in passing — or only depicted as the backdrop for on-set meltdowns.

Of course, we do cover the expected and exhausted tabloid stories about her relationships — at least the ones that involve famous people. Joe DiMaggio (Bobby Cannavale) beats her up; John F. Kennedy (Caspar Phillipson) violates her; Arthur Miller (Adrien Brody) fades away after she miscarries.

Oh, and speaking of pregnancy — if the treatment of the film’s star (both character and actress) doesn’t put you off, the moralizing, talking fetus might; I checked out when we got to the stock footage of sperm.

Of course, Dominik is not obligated to make a straight biopic of Monroe; he can make any film he wants. I can only evaluate the choices he’s made — and they are almost always terrible, silly choices. He approaches the project like a kid playing with the settings on his first real camera, throwing a hundred unmotivated tricks and flourishes at the viewer in lieu of actually finding anything to say. Aspect ratios change at random, color and lighting differ in every scene and no narrative logic or consistency is applied.

At best, it can be said that there’s a dubious achievement in making the viewer feel awful. He’s hardly the first filmmaker to discover that you can simply assault the audience for a long time; while many viewers will rightly reject this approach, some will mistake it for a profound experience. If that can be called art, then “Blonde” has it. The score, by Nick Cave and Warren Ellis, is also quite good and does much of the heavy lifting.

There’s absolutely praise due to de Armas, who ignores the shortcomings of the project and gives Monroe the dignity and some of the complexity denied to her by Dominik’s reductive script. She creates an interpretation of the real person that is constantly searching, literally and figuratively, for purpose and clarity; hidden amongst the 166 minutes of “Blonde” is a strong performance.

Unfortunately, de Armas is the only one who seems to care about who Marilyn was. In a recent interview — where Dominik used the word “whores” to describe some of Monroe’s iconic roles, by the way — he opined that no one actually watches Marilyn Monroe’s movies anymore.

I’m sure I don’t need to remind you, but Monroe appeared in “Some Like it Hot,” “The Misfits” and “All About Eve,” among many others.

This guy needs to watch some better movies. Maybe it’ll stop him from making another bad one.