Millie’s Is on the Move, and Kevin Sousa Will Make Ice Cream for Dinner

Millie’s finds a new home in Homestead, and Kevin Sousa will host an ice cream dinner with OddFellows' Sam Mason at Superior Motors in Braddock. 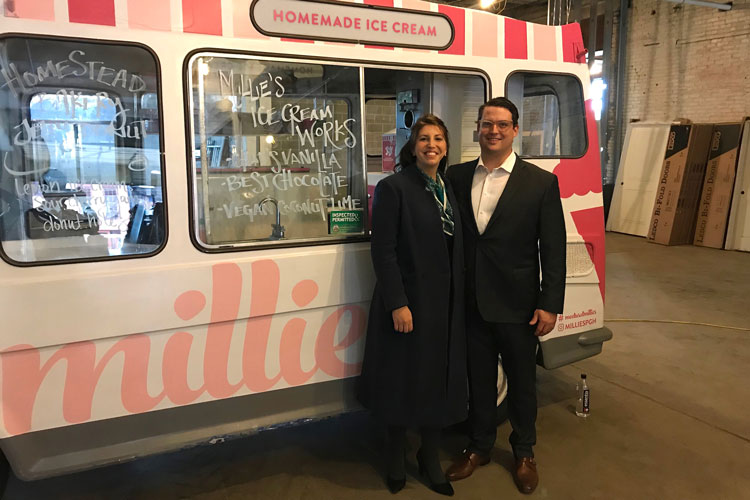 Millie’s Homemade Ice Cream has found a new home. Chad and Lauren Townsend’s ice cream business, which has scoop shops in Shadyside and Downtown, will move its production next year to a 7,000-square-foot facility in Homestead. “We saw this building two years ago and have been working with ACTION-Housing ever since to make it happen,” says Lauren Townsend.

“The Mon Valley excited me so much. I love the heritage of manufacturing that's here,” says Chad Townsend.

The Townsends say that they ran out of space in their current production facility in Homewood, which is a second-floor, 3,000-square-foot space split into two rooms. Millie’s new location, which should be in operation in February 2019, will allow it to continue to expand its commercial and wholesale operations for the foreseeable future. “We could have upgraded to a space somewhere in the middle, but I wanted to go all the way and say, 'That's it, this is home,’” says Chad Townsend.

The Millie’s expansion plan includes tours and a tasting room at the Homestead facility and opening several more scoop shops over the next few years, with the first one as early as 2019. Chad Townsend says that Millie’s also is in the final stages of becoming a certified B-Corporation, an international certification that “are businesses that meet the highest standards of verified social and environmental performance, public transparency, and legal accountability to balance profit and purpose.” Millie’s would be the fifth certified B-Corporation in Pittsburgh.

A few months ago, Kevin Sousa, executive chef and co-owner of Superior Motors in Braddock, was talking through potential chef collaborations with Chris Clark, the restaurant’s general manager. Sam Mason, former pastry chef of wd~50, was on the list of possible guest chefs; Clark has worked with him at wd~50 and Sousa was a fan of his creativity and technique.

“His technique is amazing. I fell in love with them when I ate at wd~50,” Sousa says.

Mason has since 2013 run OddFellows Ice Cream Co., a four-location ice cream business in New York City touted for forward-thinking flavors. “I would like ice cream to take center stage. Why not go all the way with it?” Sousa says.

To that end, Sousa and Mason will collaborate on a six-course dinner on Dec. 2 in which ice cream will play a prominent role in each course; the first four courses will be savory, and the final two will be sweet. “Some people will be surprised, some people will be delighted and some people might be confused,” Sousa says.

The Superior Motors chef says that he and Mason still are in the early stages of planning the menu and that they’re “throwing around some pretty wild ideas.” Tickets for the dinner are $115.