The 80-seat restaurant will be located on the 10th floor of the forthcoming The Oaklander Hotel in Oakland. 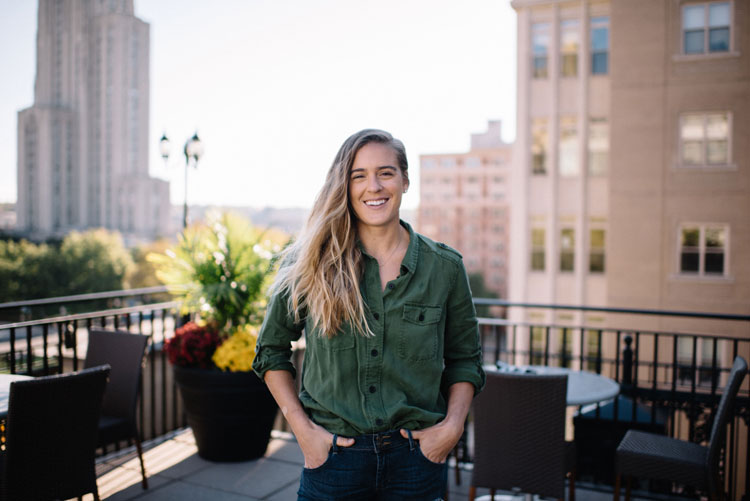 Pittsburgh is set to get another destination hotel restaurant in early 2019 with the opening of Spirts & Tales on the 10th floor of the forthcoming The Oaklander Hotel in Oakland. Jessica Lewis is executive chef of the 80-plus-seat restaurant.

Lewis has made a name for herself in Pittsburgh as the proprietor and chef of Carota Cafe, one first cohort of Smallman Galley restaurants. Prior to that, she worked as sous chef of The Commoner and catering sous chef at Heinz Field. Since leaving Smallman Galley in mid-2017 Lewis has taken on various leadership roles at or, The Whale Downtown and Merchant Oyster Co. in Lawrenceville; she'll leave those restaurants for her new position. Spirits & Tales will be her first position as executive chef of a larger-scale operation.

“I’m ready for it. I feel like I’ve done it, already, in a roundabout way. I’ve seen a lot of things from different perspectives from big operations at Heinz Field, opening a restaurant at Kimpton (The Commoner) and having my own place at Carota,” Lewis says.

Lewis' menus still are in the planning stage, but she says Spirits & Tales will be a modern brasserie with a menu built on small plates, and a good amount of attention will be focused on vegetables and seafood. She'll have classic American dishes, a breakfast and lunch menu, and a bar menu, too. Lewis says one of her primary goals is to limit the amount of waste in the kitchen. “Everything I can do to use every part of everything. That’s what I’m going to try to do,” she says.

Lewis has over the past few years built a reputation as a chef who walks the walk on sustainability issues. For example, she leads the Pittsburgh effort of Oyster Recovery Partnership, a restoration effort in the Chesapeake Bay; her program is the first pilot site outside the immediate Chesapeake Bay region, and Lewis plans on returning in the near future 25 60-gallon barrels filled with shells collected over the past year-and-a-half at Merchant and Whale (Lewis says they go through 3,000 oysters per week at Merchant). She expects to continue the program at Spirits & Tales, and also aims to expand it to other Pittsburgh restaurants. “Sustainability is not just what I’m doing at my restaurant. It’s about getting everyone else to participate as well,” she says.

Lewis also is on the leadership board for No Plastic Please Pittsburgh, an organization with a goal to reduce and then eliminate the use of single-use plastic. “Let’s change what we’re doing with take-out bags and to-go stuff first,” she says.

For now, though, her primary focus is getting everything up-and-running for the opening of the 167-room hotel, which is the first Marriott Autograph Collection hotel in Pennsylvania. “There’s going to be something for everybody. And with the view, it’s a place where you’re going to want to hang out for a while,” she says.