Jack and Patty Buck added grand furniture, décor and dishes they collected from trips around the world. 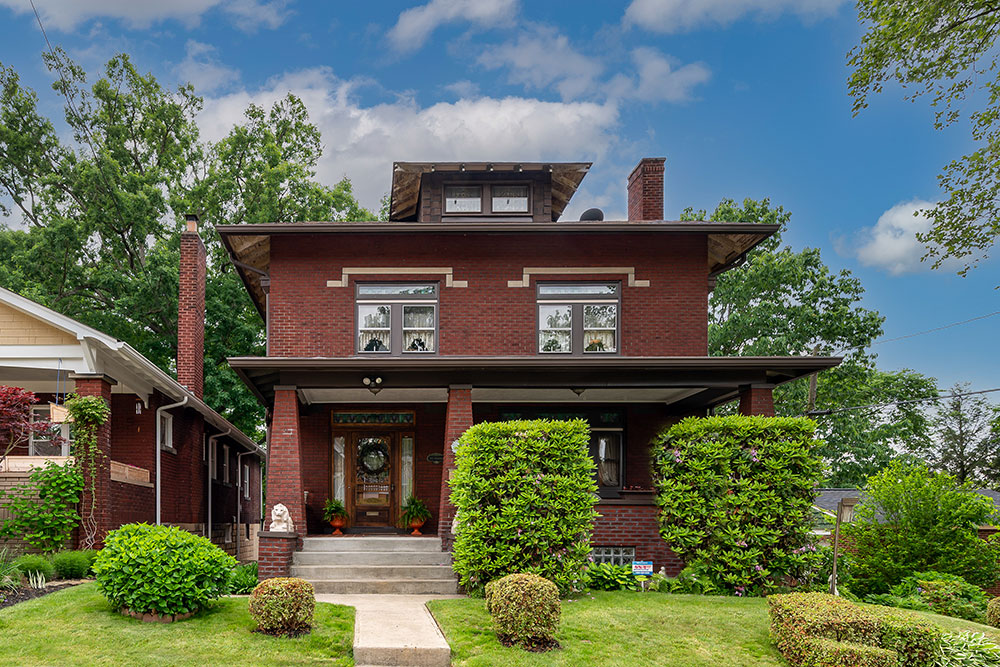 Jack and Patty Buck found love in more ways than one. The couple met in 1991, married in ’92 and started looking for a home to share. After more than a year of searching, they stumbled upon 399 Oakwood Drive in New Kensington — and fell hard for it.

Located on a private cul-de-sac with only eight other homes, the all-brick, century-old home features an eyebrow detail above the second-floor windows, craftsman-style pillars and a terra-cotta tile floor on the front porch.

The carved oak door has beveled glass sidelight windows. Above this, a six-foot-long transom of stained glass in greens and yellows fills the space with prisms of color.

When the Bucks first stepped inside, a carved staircase with beefy newel posts and oak hardwood floors stopped them in their tracks. They were enchanted.

“We were in the entryway and I turned to Patty and said, ‘Where’s the Christmas tree going?’” Jack says. 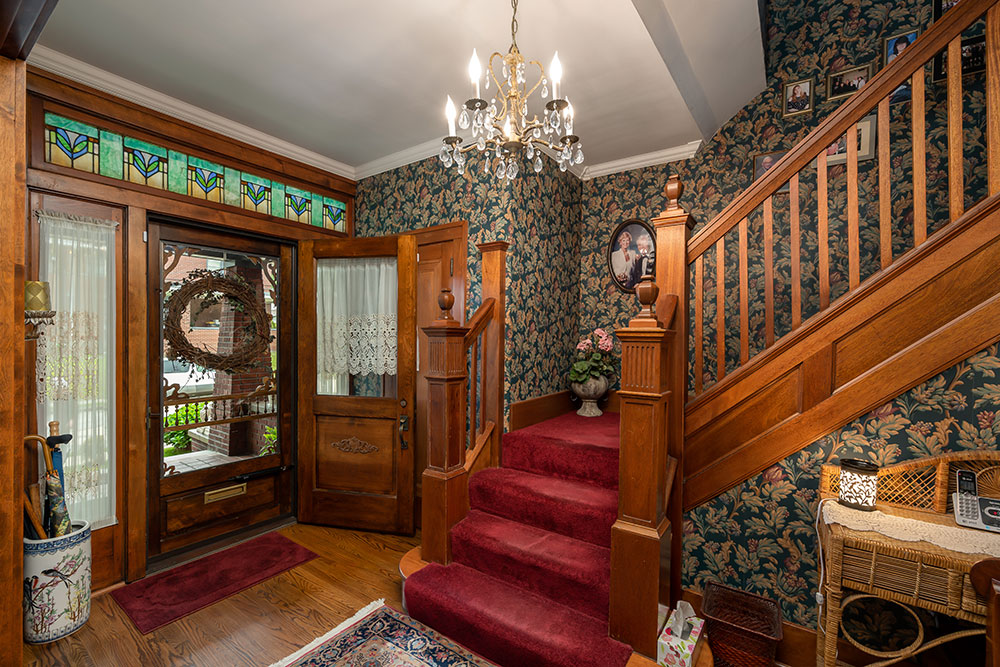 After 30 years together in the home, Patty died last July after a battle with Alzheimer’s; Jack warmly remembers the time they spent decorating and entertaining there.

“Patty embraced all of these old details,” he says.

After buying the home, Jack says he and Patty made it their own by adding lots of ornate details. With its grand furniture, décor and dishes collected from the couple’s trips around the world, entering the home today feels like stepping back in time.

“I took time off to work on the house,” Jack recalls. “Patty had a real eye for the decoration, and it just called out for Victorian décor.” 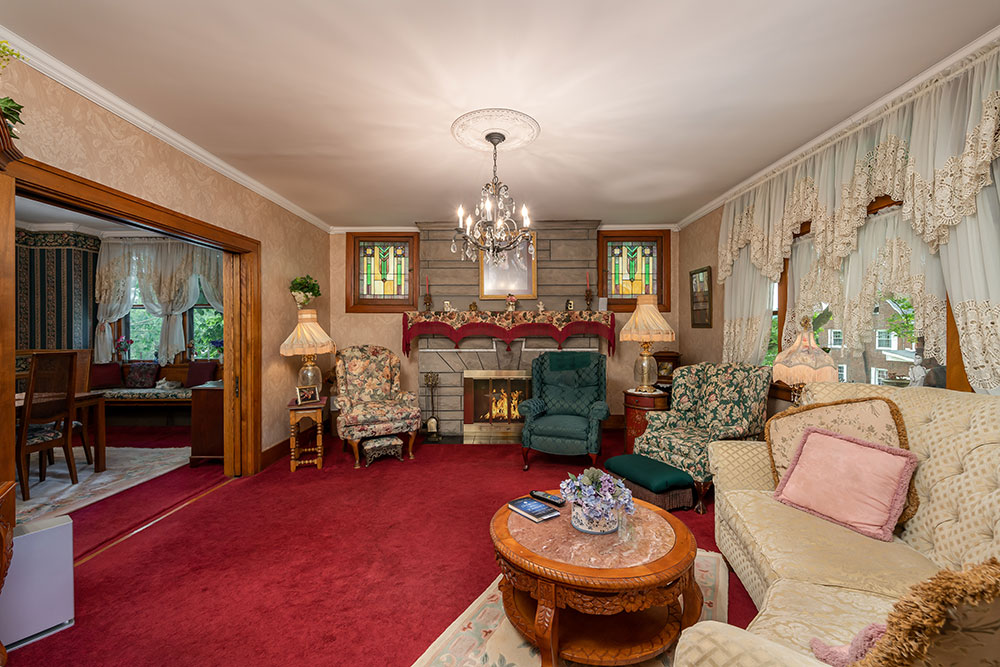 While Jack stripped away the paint and restored the home to its natural state, Patty selected the furniture and wallpaper, including for the entryway.

“It was quite an ordeal. Needless to say, that can get challenging,” Jack says. “There were a few misunderstandings.”

Patty chose a large print floral pattern with a stubborn repeat, a match challenging even for experienced home professionals. Nonetheless, it made a perfect backdrop for a lovely portrait of the couple.

The large room has a wood-burning fireplace with a stone facade, soft peach wallcovering and a chandelier. It opens into the dining room through a second pair of pocket doors with the same glass detail. 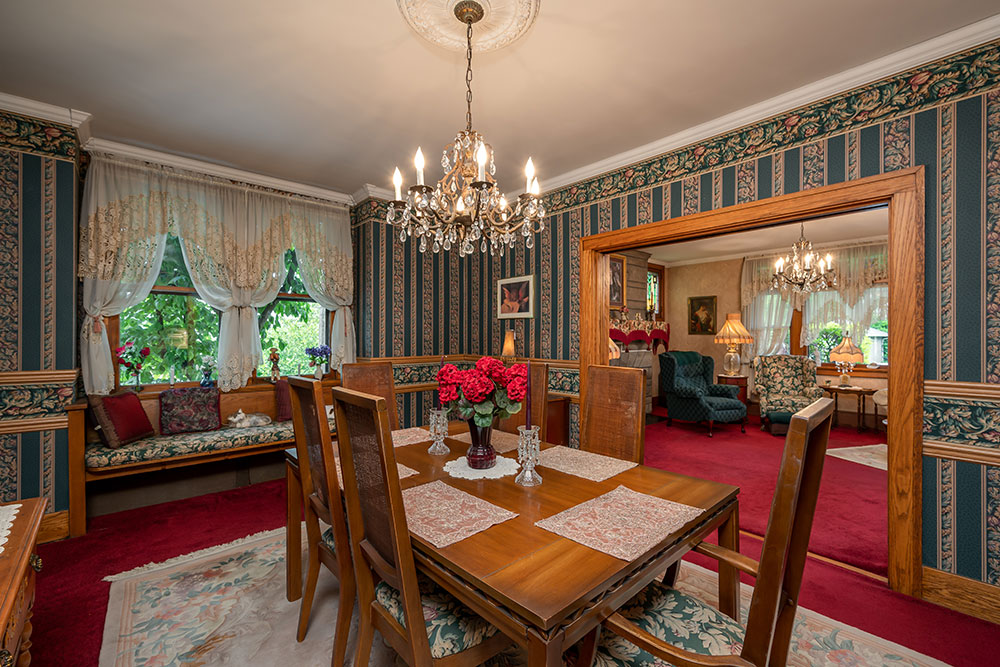 The dining room features striped wallpaper, double-chair rails and borders in shades of green and cream. An heirloom chandelier from Patty’s mother hangs over the table and will stay with the house. Under the window, a built-in bench seat has seating for six. In the corner is an antique china closet filled with pieces the couple brought back from their trip to England in 1993.

“That started her collecting,” Jack says of his wife. “She would throw great formal dinner parties and put out the Victorian table settings for the dinners.”

Compact and efficient, the kitchen was remodeled by the home’s previous owners, who installed oak cabinets that reach up to the 10-foot-high ceilings. There is a gas range, built-in microwave, refrigerator and dishwasher. 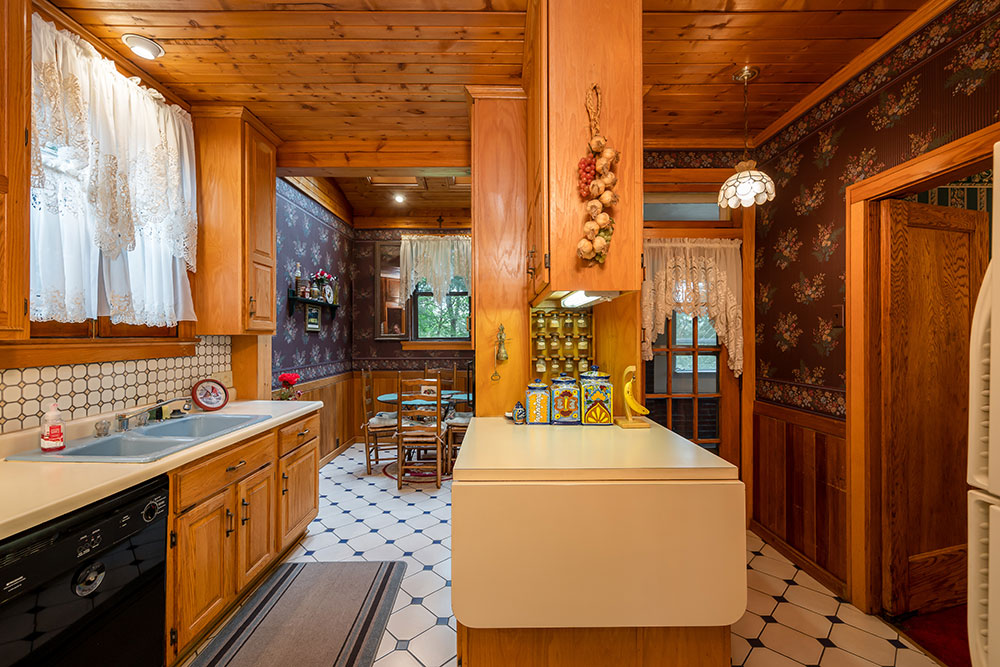 In what was once likely a butler’s pantry, a cozy breakfast nook next to the kitchen has original panel wainscoting and a wood ceiling. An original milk delivery door can be seen from the outside only as it was covered by the previous owners.

Attached to the back of the home is an enclosed porch with apron casement windows stacked in threes and a hanging porch swing that gave Patty comfort in her later years.

“She loved to swing on that porch,” Jack says. 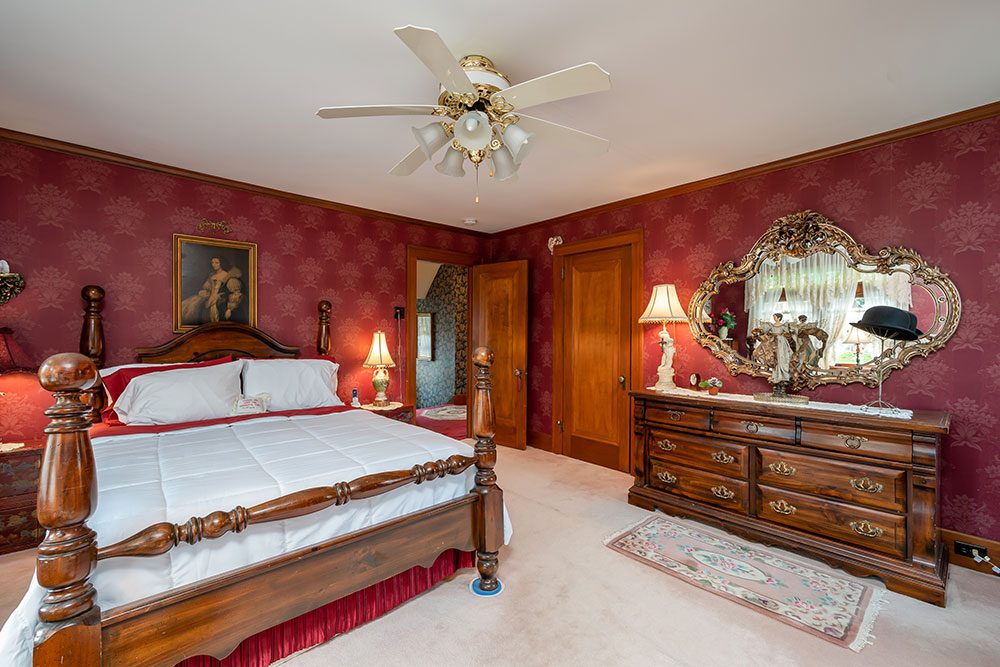 A large bathroom services the second floor. It has the original, cast-iron alcove soaking tub and a standing shower. The walls have white subway tile with red wallcovering above it. Adding a vintage touch is a gilded mirror with glass globe lights on brass arms.

“We found the mirror and light on a trip and thought it just fit,” Jack says.

The third floor has two rooms. One is listed as a bedroom and has cream wallcovering and a closet; the other is listed as a craft room because of the generous storage space.

“We kept oodles of Christmas decorations up there,” Jack says.

The room also has a plumbing line, revealing it probably was once used for live-in help or boarders. 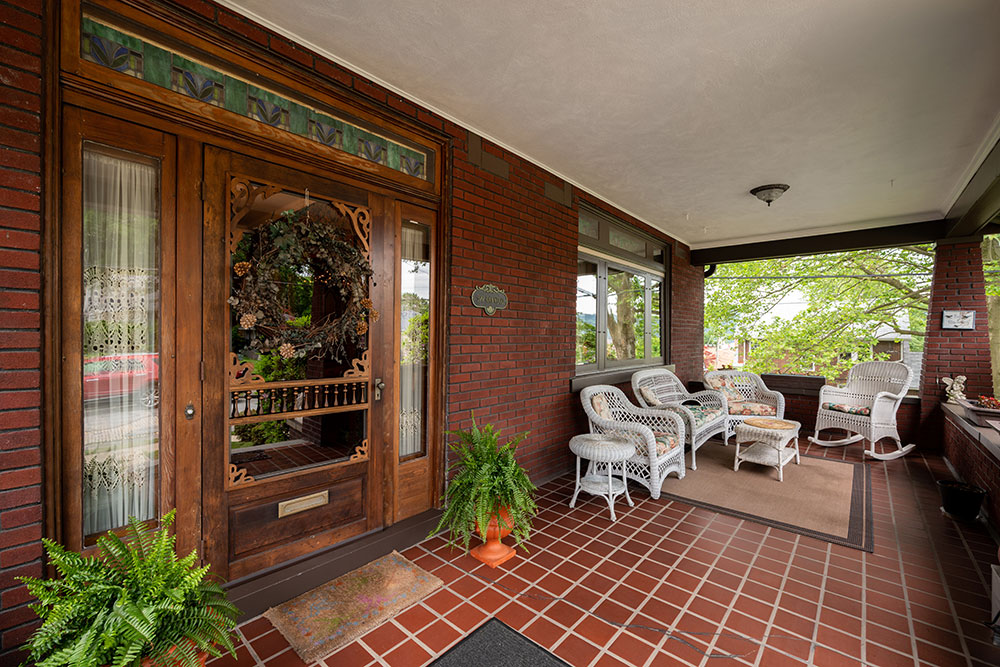 The boiler was replaced in 2016 and there is steam heat. While there is no central air, the home’s brick exterior, 8-inch block-and-plaster interior walls, plus window air units, help keep it cool in the summer months. The Spanish tile roof was replaced in 2016 with asphalt. There’s also a two-car garage that fits large vehicles.

During the holidays, Patty typically would host several weeks of parties for work colleagues, family and friends. There even was a night for the local carolers, who were invited inside for hot chocolate and cookies.

Their guests often commented on the two old portraits that hang on the dining room wall.

“Many have asked us, ‘Are they your grandparents?’” Jacks says. “I would always reply, ‘We found them in Phoenixville, Pa. They just felt like they belonged here.’”

And they did, along with all of the other guests who entered this gracious home.

About: New Kensington (newkensingtonpa.org)
Population: 12,292
Planes, Trains & Automobiles: A 55-minute commute to the airport. Port Authority transport. A 25-minute commute to Downtown. Street parking.
Schools: New Kensington, Arnold School District. The main campus athletics include modern tennis courts and track and field facilities. Memorial Stadium has a multi-sport, artificial surface and is adjacent to a field house that includes facilities for weight training, wrestling, batting cages and more. There is a newly renovated 1,200-seat auditorium with updated sound and lighting system for creative arts. (nksad.com)
Neighborhood: Located in Westmoreland County along the Allegheny River, New Kensington has a long and rich industrial history. Companies that settled and have roots in the area include Pittsburgh Reduction Company (Alcoa), Adams Drilling and Logan Lumber. There is a historic district with buildings erected between 1891 and 1947. Architectural styles include Beaux-Arts and Colonial Revival among original properties of PNC Bank, the Ritz Theater and the Wear Ever Building.

Opportunity Knocks in One of Pittsburgh's Up-and-Coming Neighborhoods