Hot Property: From a Plain Jane Ranch to a Mid-Century Marvel

The single-story home in Mt. Lebanon is filled with luxury touches, including one-of-a-kind feature walls and an Instagram-worthy pavilion. 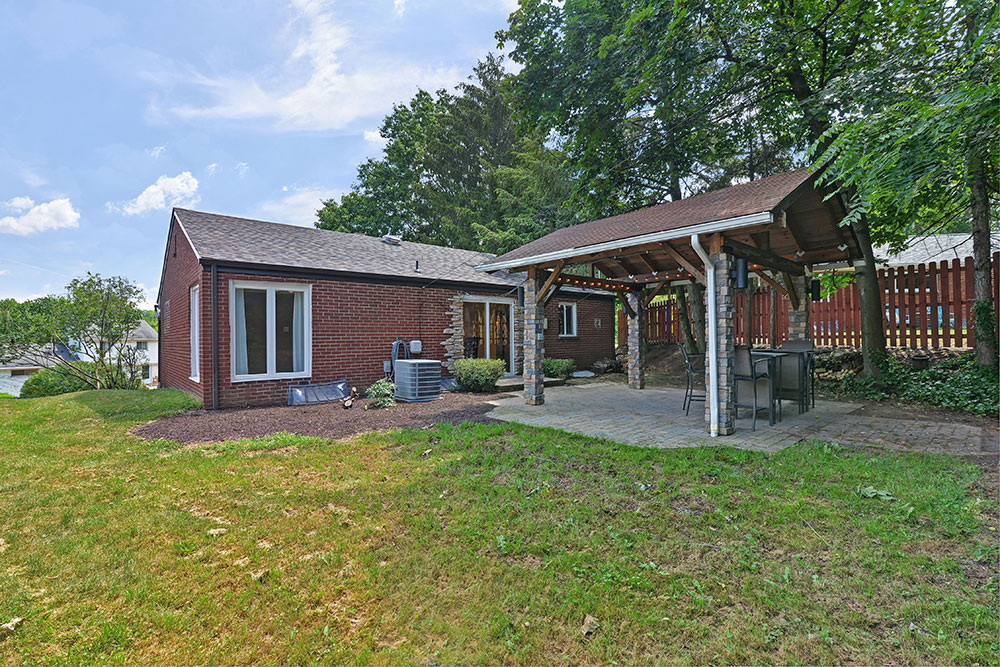 When Denis Yevstifeyev purchased his first home in April 2007, he was a young man full of dreams who happened to fall in love with the area.

“I had no family back then, but Mt. Lebanon attracted me,” he says. “It had a good school district.”

The house was another story. 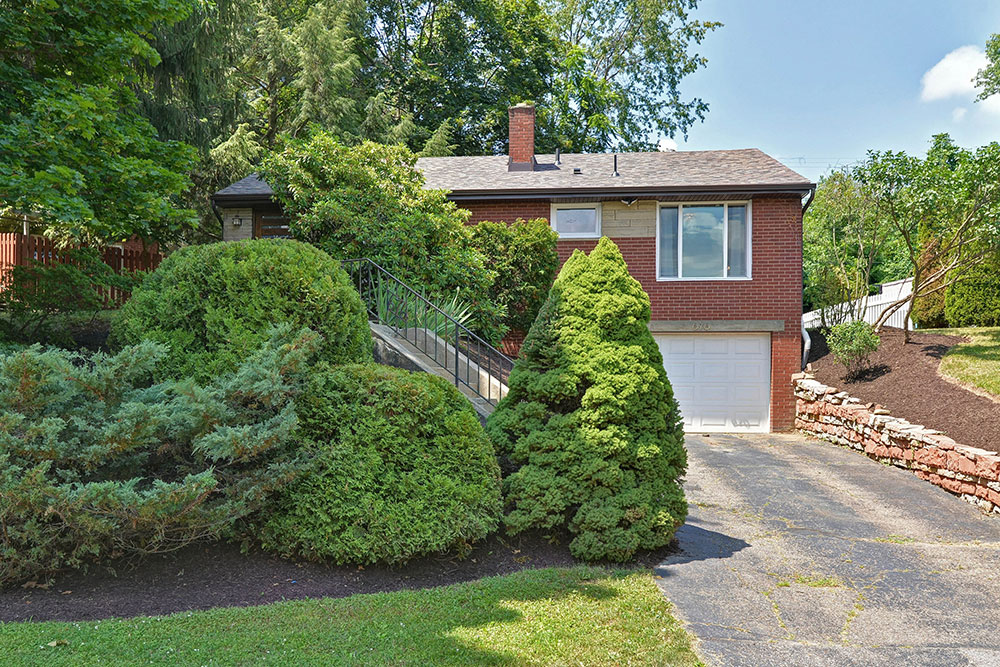 Located at 676 Oxford Blvd., the plain, single-story ranch built in 1957 — part of the post-World War II housing boom fueled by the GI Bill — had three bedrooms, one bathroom and a single-car, integral garage.

“It had no character but a lot of opportunities,” Yevstifeyev says. “It had nothing to look at, but I had ideas, and I said to myself, ‘I can work with this.’”

He moved in — and his life quickly moved forward. Soon after renovations started, Yevstifeyev met and married his wife, Ksenia. Together, the couple transformed the home into a Mid Century Modern-showplace featuring luxury touches that include radiant heat bathroom floors, an elevated lighting scheme and an Instagram-worthy, freestanding covered outdoor patio.

They also installed feature walls and rearranged the interior footprint to make the home into a more livable two-bedroom, two-bathroom ranch.

Their family grew into five and, for the last several years, they have been renting out the home. It is now on the market for $299,000 (MLS#1508900, Alex Tulandin, Keller-Williams Real Estate, kw.com). 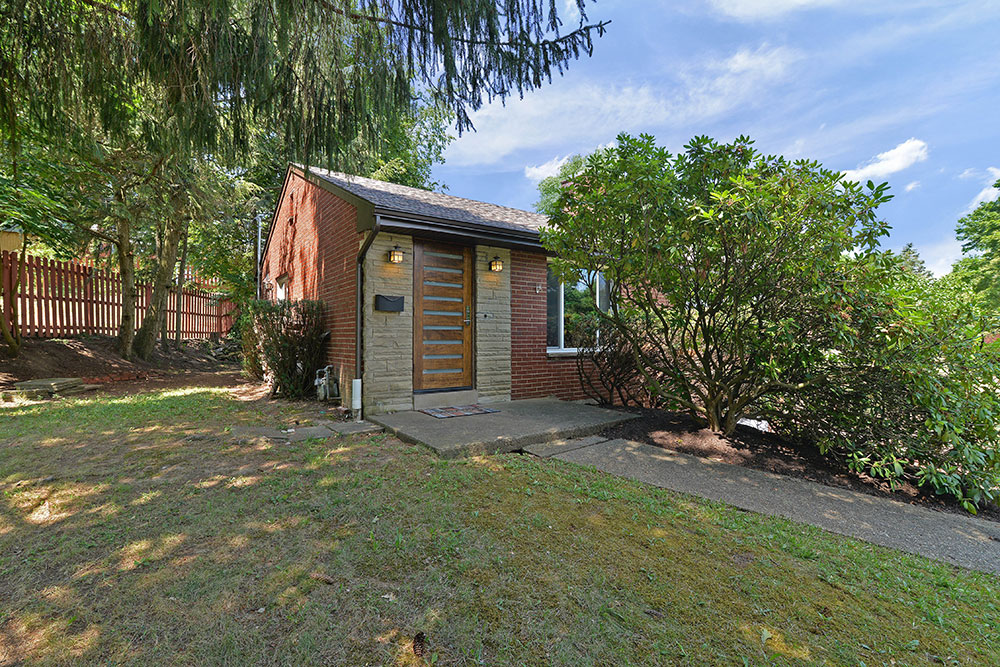 Viewed from the street, the home’s exterior exudes sleek style with a slatted horizontal oak door flanked by modern ledgestone and lit with a pair of modern sconces.

Inside, the couple conceived and installed a geometrically interesting wall in the living room with a large “C” cutout and several lighted shadow boxes.

“Many people see the IC Light logo. It was just by coincidence,” Yevstifeyev says. “We had no idea. It just happened that way.” 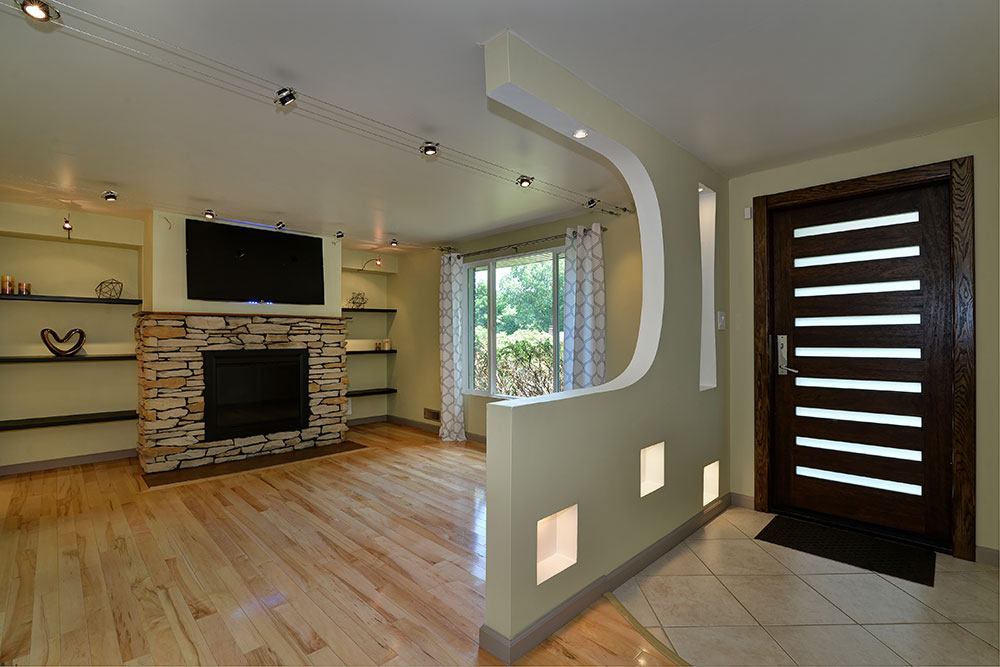 They added tile in the newly created entryway and, just beyond, a wood-burning fireplace with stone façade that takes a centerplace in the living room. Newly refinished hardwood floors, hidden technology and a light paint scheme amplifies the home’s airy feel.

Straight ahead from the entry, the couple flipped the dining area and the kitchen to create a more useful floor plan. A chic IKEA kitchen features a mixture of shaker-and-glass-front cabinet doors, a microwave drawer unit and a glass statement hood surrounded by a floating stone wall backsplash. 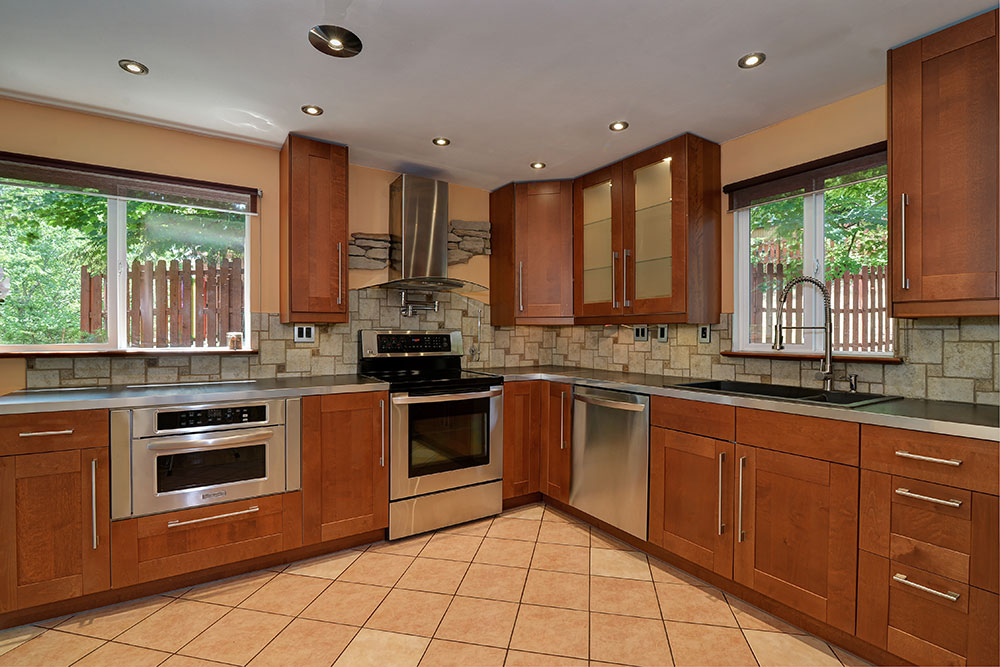 New, larger windows were installed throughout the home, flooding the space with natural light. The former kitchen’s space now has a dining table that seats six. The space previously was a small, awkward, unusable bedroom that had a tiny window. 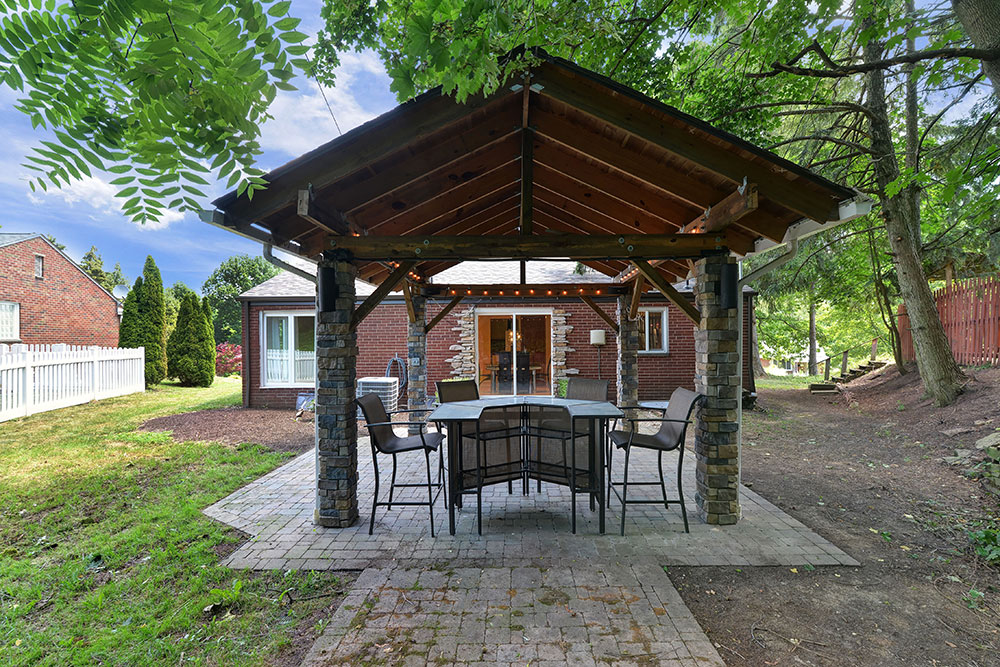 The couple installed a new sliding glass door that leads to the rear yard. A hardscape patio is covered by an A-frame roof that’s set atop live-edge timbers with four pillars finished in stacked stone. The entire structure, seamlessly wired for media, includes speakers and a television.

Back inside, the two bedrooms include a 13-by-10 square-foot primary bedroom. The couple installed pendant lights from the ceiling, which are intended to hang over nightstands, and a custom closet with frosted glass modern panel doors. A flush-mount pendant chandelier finishes the space. 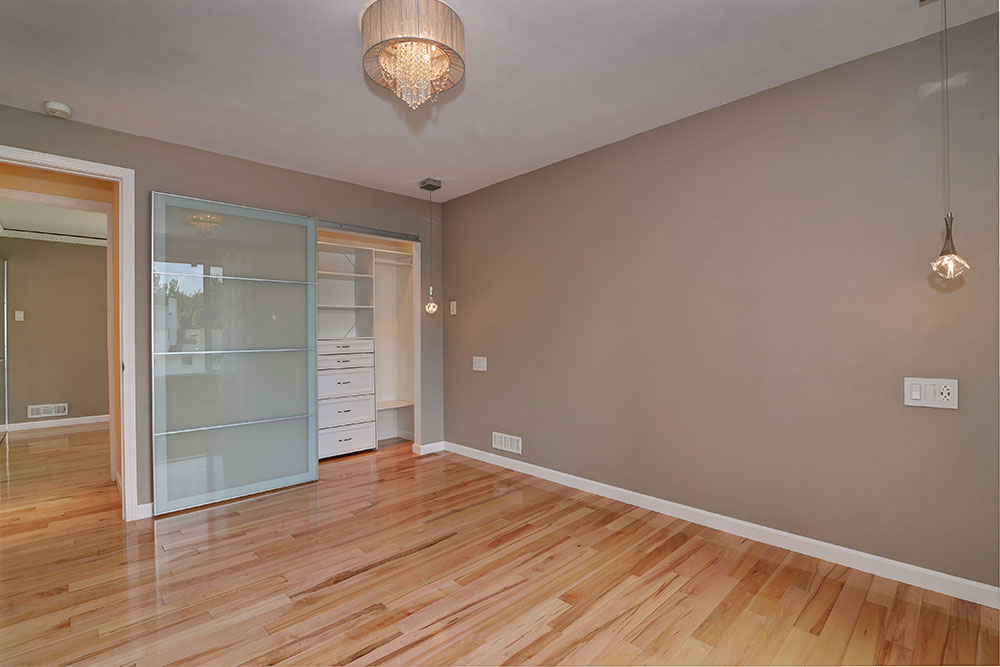 The second bedroom features new corner picture windows and a large closet as well as a flush-mount bubble light fixture.

In the bathroom, luxury is packed into every corner. The floor-to-ceiling charcoal glass tile has a striking feature stripe, while the shower boasts a ceiling-mounted rainshower head, jetted soaking tub and a floating vanity. 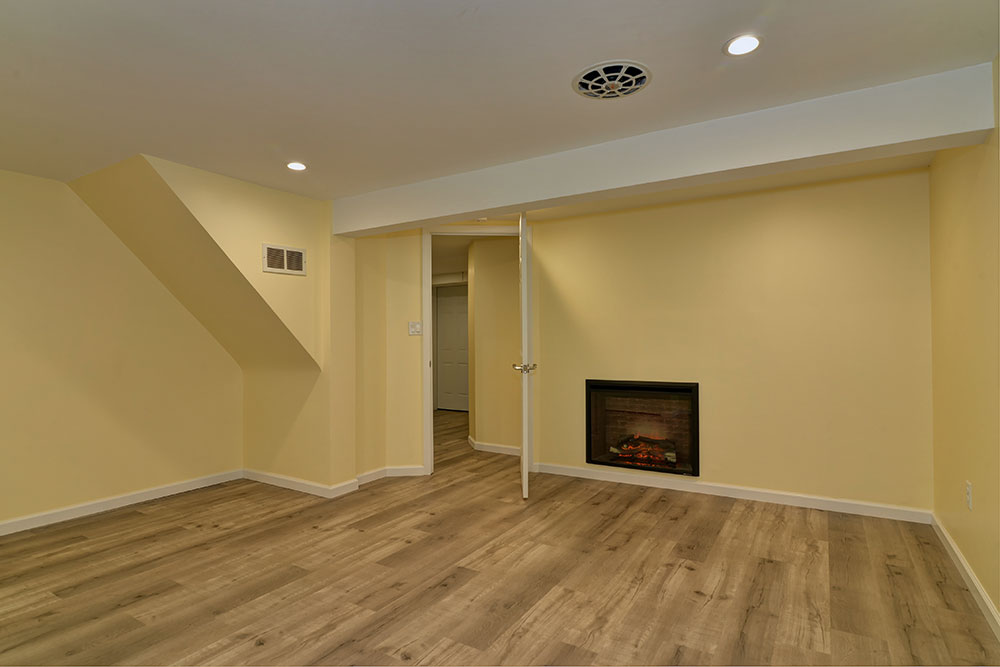 Painted a creamy yellow, the finished lower-level game room has luxury vinyl plank flooring and a fireplace on the far wall. A full laundry room with front-loaded, high-end appliances allows plenty of space to fold, iron and sort.

Although Yevstifeyev has an office job, he has a long-standing love of working with his hands, which is apparent throughout the home.

“Growing up as a kid in Russia, I watched my father repairing and building,” he says. “Once I got my own house, I wanted to do things. I could see through it. I didn’t have to draw anything, I just did it.”

He and Ksenia are happy to pass their house to the next owners.

“I still miss the location of this house,” he says. “The neighborhood is awesome. It is secluded and conveniently located, close to the airport, yet near all of the major stores. I will always be thankful to my realtor for showing me this neighborhood.”

About: Mt. Lebanon (mtlebanon.org)
Population: 33,137
Planes, Trains & Automobiles: Just a 25-minute commute to the airport. Daily transport via Port Authority’s T-Rail line and street buses. On-street, metered and by permit parking.
Schools: The Mt. Lebanon School District is highly regarded, ranking 15th in the country and first in Pennsylvania, according to Niche.com. (mtlsd.org)
Neighborhoods: Mt. Lebanon has one of the most vibrant, thriving (and dog friendly) business districts in Allegheny County. Take a stroll and visit Rollier’s Hardware, Uptown Coffee and The Fabric Place. Restaurants range from grabbing a quick slice of pizza at Mineo’s to upscale dining at Bistro 19. Benches and trees welcome visitors and the historic churches located up and down the main drag are a marvel to behold any time of the year.