Here Comes the Bride — in a Kayak?

Corinne and Bob’s day would not have been the same if they hadn’t incorporated their love for the outdoors in a special way. 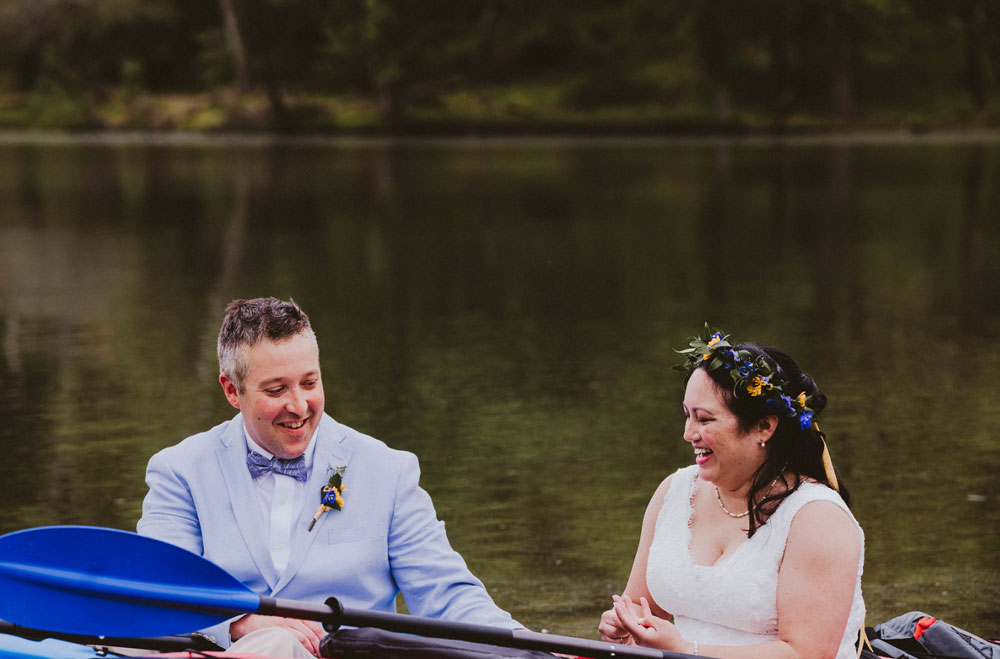 For many couples in the midst of planning their weddings, trying to find the perfect location for the ceremony is one of the hardest steps in the process. Guest list size, indoor versus outdoor, weather conditions, and overall ambiance are all factors that play into the decision.

Corrine Nunez and Bob Newman, felt this exact struggle as they tried to decide where their informal ceremony would best work.

“As a deacon at Shadyside Presbyterian Church, I was so tempted to hold the ceremony in our stunning sanctuary – but I also struggled in that I did not want an extremely formal wedding,” says Corrine.

Luckily for Corinne, the couple’s close friend made a joke that turned out to be exactly what they needed.

“My friend Brandon jokingly said, ‘You both should get married in your kayaks.’ I don’t think he’ll be making any more jokes to us, since we took the idea and ran with it,” says Corinne. “Nature is important to both of us. We basically live outside during the summer.” 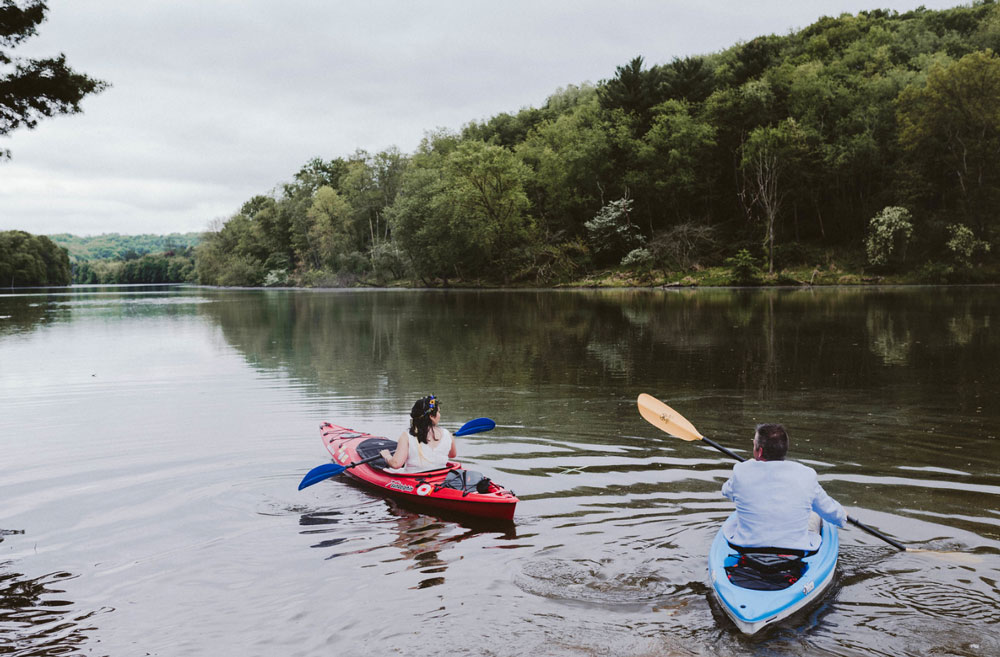 On the morning of their wedding on May 17, there was a real fear that the impending thunderstorms would push their ceremony indoors.

“Everyone thought we were crazy, especially since Pittsburgh weather can be so fickle,” says Corinne. “Like good Pittsburghers, we had a rain plan, but it just wouldn’t have been the same. The forecast on May 17, 2019, was 100% chance of thunderstorms. My dreams were crashing and burning.”

Fortunately for the soon-to-be bride and groom, the storms just missed North Park Lake the morning of their big day and the row down the aisle was still on.

“As we paddled up (to the shore), it was so magical to see everyone’s faces and know that we had pulled off this amazing feat,” says Corinne. 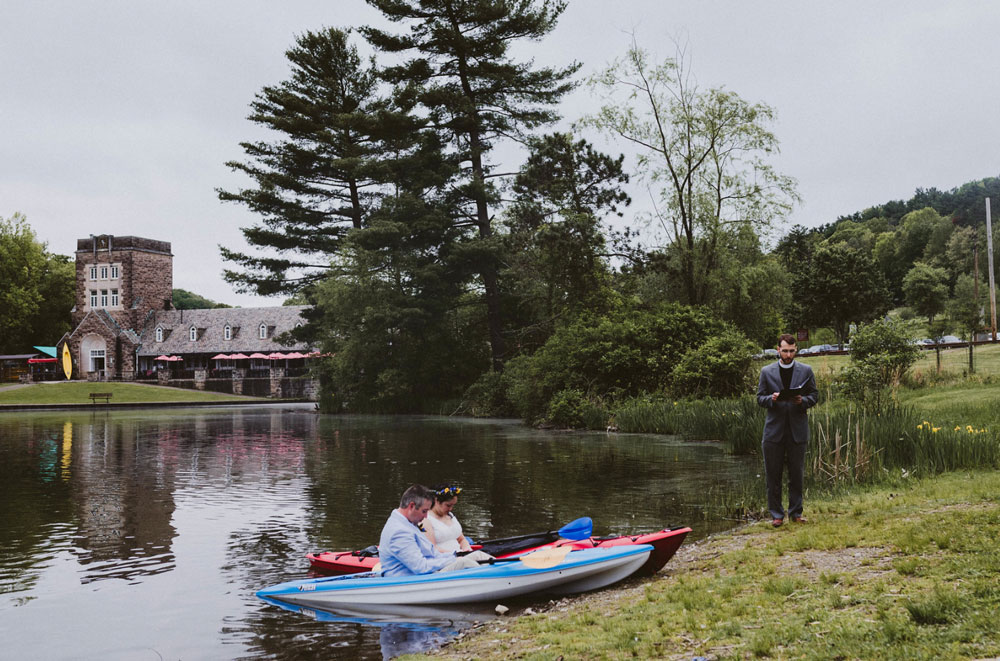 The couple was pulled to the shore of the lake and married by their pastor while they sat in their red and blue kayaks, hand in hand. For their first kiss, they stepped out of the kayaks with the help of their friends.

“It was also fun to watch everyone hold their breath after the ceremony when Bob, along with a carefully chosen group of friends helped me out of the kayak,” says Corinne, who wore a full-length dress. “I would be lying if I said I wasn’t holding my breath too.”

The lake also made for a beautiful backdrop for the couple’s posed photos with their friends and family. Following a nature-filled photoshoot, the fun on the water continued as the newlyweds paddled to their brunch reception in North Lake’s Rose Barn. 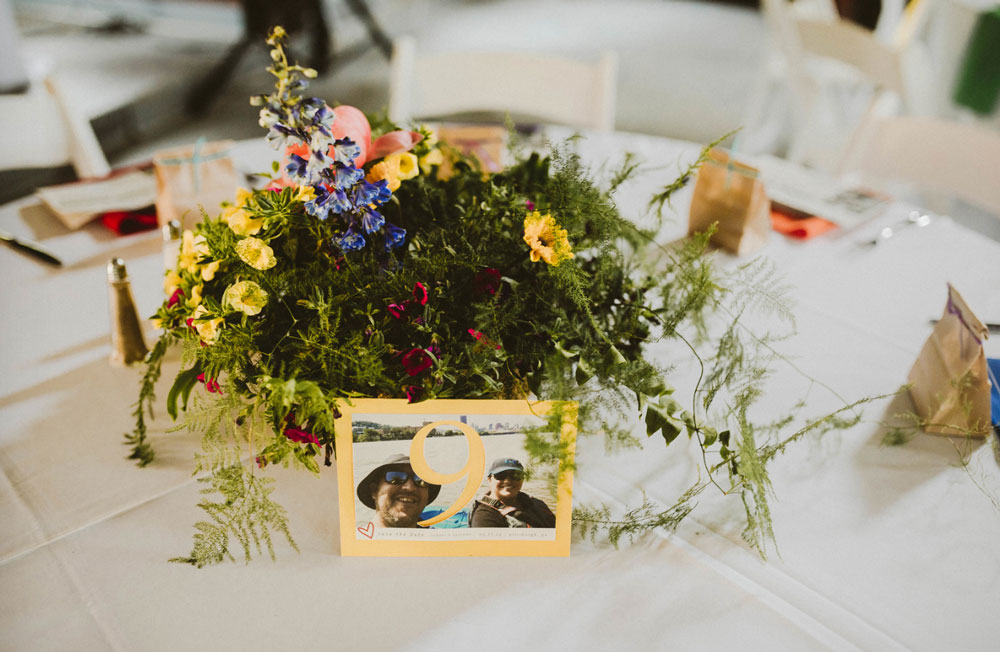 The reception was also centered around their love for the outdoors and nature. Decorations included centerpieces with greenery and a photo of the couple kayaking on a sunny day in Pittsburgh to mark the table number. Their “guest book” was a framed map of North Park Lake with a white mat around it to allow their guests to leave a message for the newlyweds.

“We had a morning ceremony and brunch reception because brunch is our favorite meal of the day,” says Corinne. 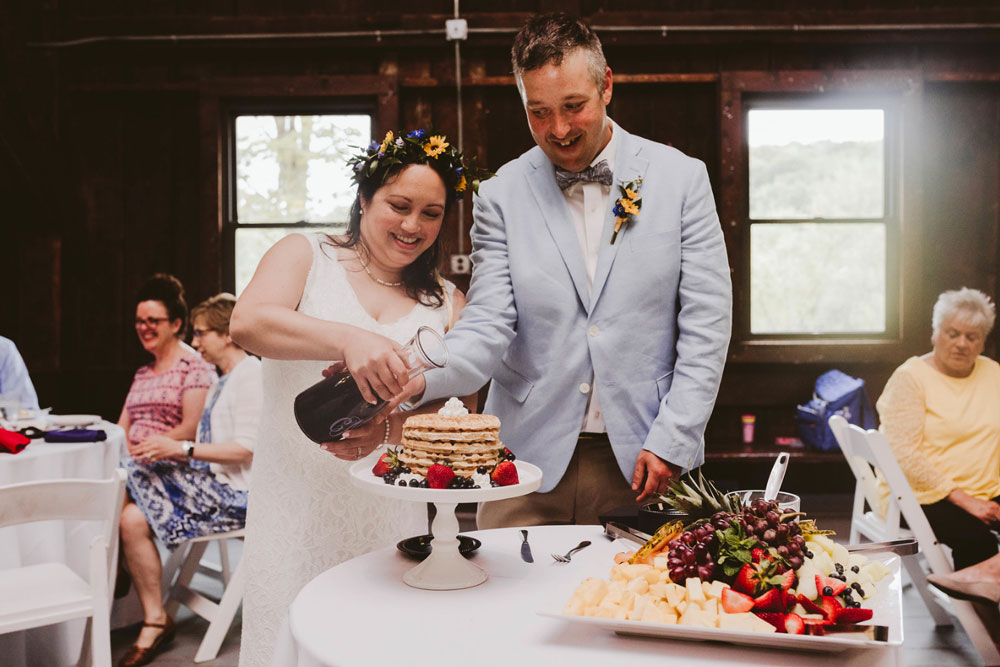 The menu for the reception, which was printed on a newspaper cover, was all of the couple’s brunch favorites: eggs, french toast, an omelet-making station, pastries and fresh fruit. In lieu of a traditional cake cutting, the couple also drenched a stack of decorated waffles in syrup and cut into it while the song “Pour Some Sugar on Me” by Def Leppard played.