The short film, made as an unconventional plea against elder abuse, is now streaming on Shudder — and it contains rare footage of a bygone local theme park. 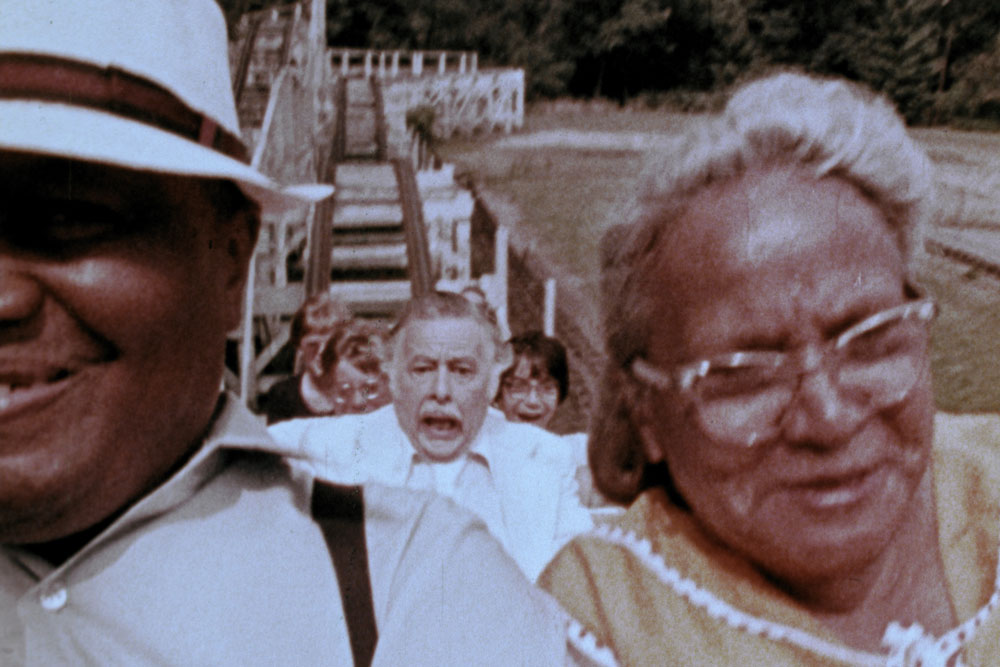 Call it terror from beyond the grave.

We shouldn’t be surprised that, four years after his death, George A. Romero still has some surprises in store. The longtime Pittsburgher and godfather of zombie cinema is best known for his landmark horror movies, including “Night of the Living Dead” and “Dawn of the Dead.” While most of his filmography has been endlessly studied and remains widely available, the most dedicated horror hounds knew of a purportedly lost Romero feature: “The Amusement Park.”

The 52-minute film, filmed in the same year that Romero’s “The Crazies” and “Season of the Witch” were released, received no release of any kind when it was made. Then-nonprofit the Lutheran Society — an early incarnation of ongoing charities focused on elder care — commissioned the work as a dramatic demonstration of the difficulties facing senior citizens.

They certainly got a much more unusual film than they bargained for. (Perhaps they hadn’t seen “Night of the Living Dead.”)

Opening and closing segments feature the film’s star, Lincoln Maazel, strolling through an empty West View Park, discussing the inequality in elder care — out of character. In between those segments, though, Maazel — father of well-known conductor Lorin Maazel — plays an unnamed protagonist as he wanders through a disorienting, often disturbing theme park meant as an allegorical representation of a predatory society.

Set to a dizzying, near-psychedelic soundtrack of amusement-park din, the protagonist encounters bureaucratic nightmares, financial ruin, rejection and loneliness. At one point, he follows a young couple into the booth of a fortune teller; when they ask to see their future, they’re shown a vision of neglect, unable to afford medical care.

Suzanne Desrocher-Romero, the director’s widow, told io9 that the Lutheran Society briefly used the film, eventually discarding it as too avant-garde and troubling. Disturbing though “The Amusement Park” is, they made a mistake: It would be nearly impossible to make as compelling an argument for a more compassionate, holistic approach to elder care as “The Amusement Park” does in its short runtime. This may be a work of filmmaking-as-argument, but it’s an expert example of the form — a heart-wrenching, powerful plea that few could ignore.

The film was restored under the guidance of the George A. Romero Foundation and received a one-off premiere in 2019 at Regent Square Theater. It is now widely available for the first time via the streaming service Shudder.

Beyond its own merits and value to Romero devotees, the film offers fascinating footage of a bygone Pittsburgh landmark. West View Park was a competitor to Kennywood for most of the 20th century and many of the park’s rides and sites are prominently featured. It’s a rare glimpse of the park, which was demolished to make way for a shopping center in the early 1980s.

Admittedly, the fascination of the theme-park footage is a bit odd in this case. (It’s absolutely an odd pitch to say you should come for the troubling social commentary and stay for the POV roller-coaster ride.) Then again, everything about “The Amusement Park” is uncanny. Don’t expect a typical, linear film; don’t expect anything at all, really. What you’ll find is a curious, fascinating and above-all jarring ride from a true master.

“The Amusement Park” is streaming on Shudder.