Farming is Not a Golfer’s Typical Day Job

Nothing about pro golfer Rachel Rohanna’s career has been simple — and that’s even before a global pandemic hit. 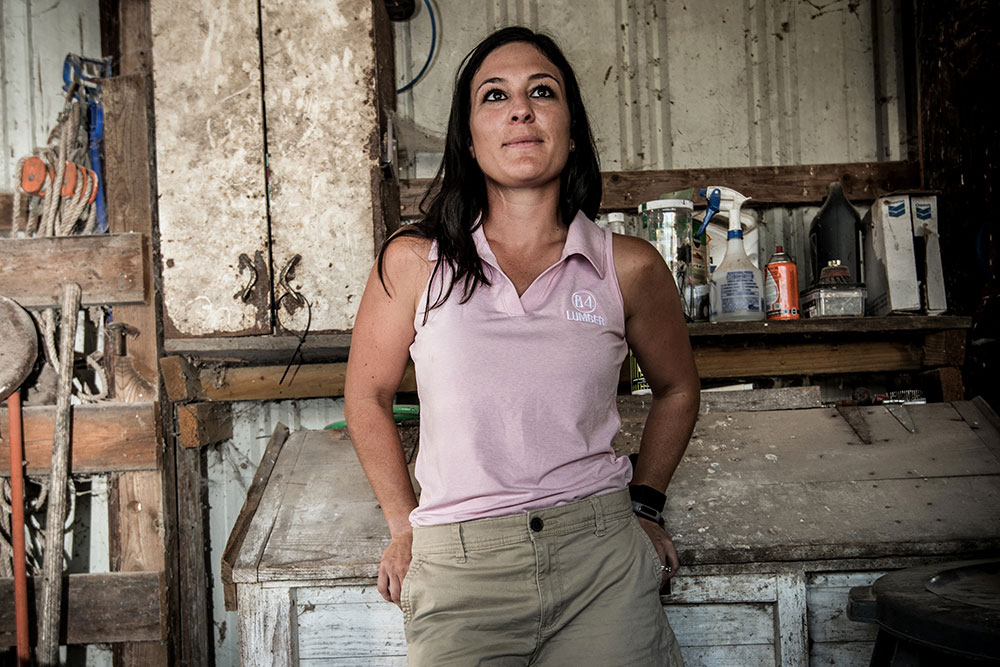 With the professional sports world screeching to a halt this spring, Rachel Rohanna threw herself into her other life, the one outside the manicured fairways of the golf tour. On a Greene County farm, she wrapped fresh deer meat in her husband’s butcher shop, fed heifers, tended to goats, sheep and pigs, fixed broken fencing and chased after her toddler daughter. 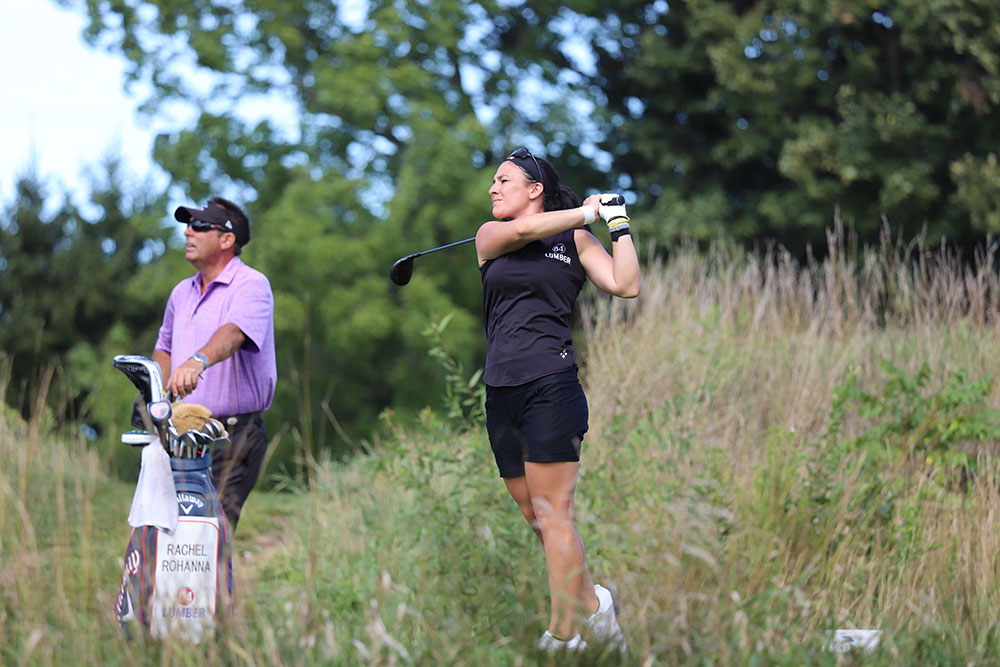 She also practiced her golf swing on hillsides of the family cattle ranch, dotted with bales of hay. At the bottom of a winding gravel path, she swung her 9-iron, lofting the ball up the hill. It landed about 145 yards away, just to the right of the path. Envisioning a fairway, she was happy with the shot.

“A lot of golf course designers build the trouble to the left. I purposely try to hit it straight or, if anything, to the right,” she says. “Last year, I was hooking and hooking and getting into trouble. I worked really hard on my swing this winter.”

In the rarified, country-club world of professional golf, farming is not a typical day job. “I don’t think you could find two more opposite professions,” Rohanna says with a characteristic bounce in her voice. “We raised 96 calves this year. I wrapped meat for five or six hours a day in my husband’s butcher shop.” 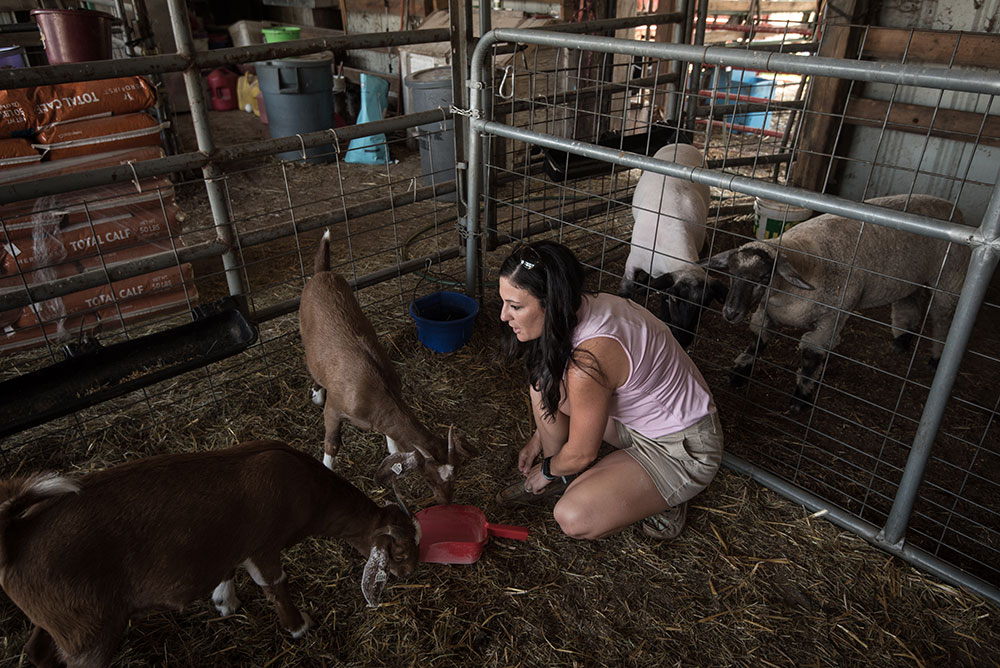 RACHEL ROHANNA AND HER HUSBAND ETHAN VIRGILI LIVE ON A FARM IN GREENE COUNTY WHERE THEY RAISE COWS, GOATS, SHEEP AND PIGS.

The unusual combination of careers drew attention in 2015 when she clinched her first win as a pro golfer at the Guardian Retirement Championship at Sara Bay, Fla. On camera, she told the reporter she would use her $16,500 earnings to buy a heifer. The soundbite reverberated around the golf world, even if it required additional explanation — a heifer is a female cow that has not yet had offspring.

Rohanna, 29, and her husband, Ethan Virgili, 30, raise Simmental beef on his family’s property and adjacent leased land that stretches to the horizon. “We raise cows and sell them to people looking to expand their herds. We feed them the top quality food. And here we are eating generic food,” she says with a laugh. “When my husband and I met in 2010, he had nine cows. Now we’re up to 200 total — 100 mommas and the rest are steers, bulls, heifers and calves.” 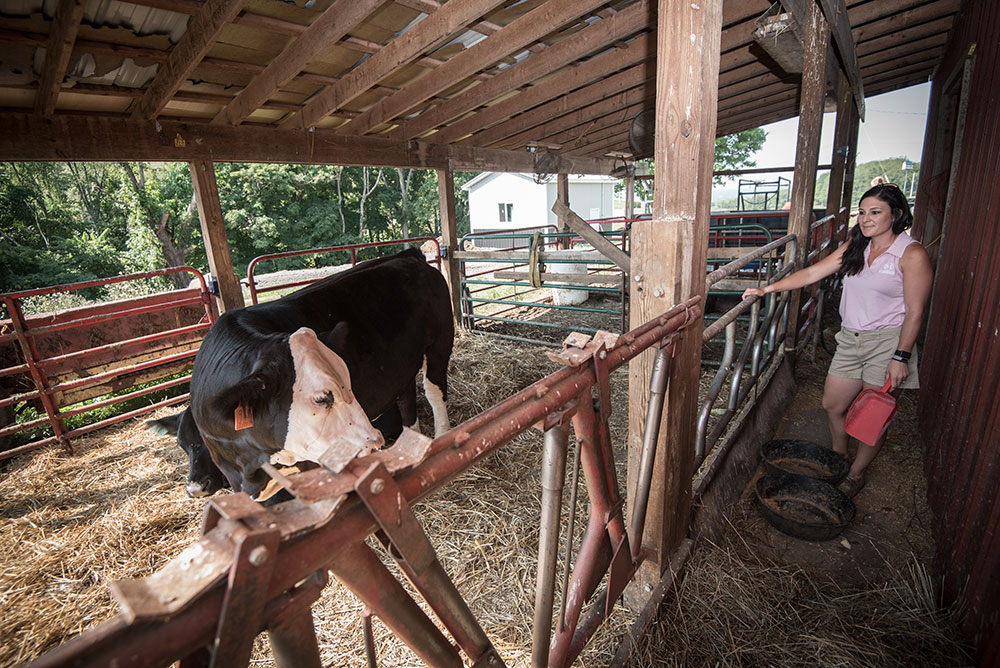 Growing up in Waynesburg, Rohanna wasn’t a farm girl, although her grandparents had a dairy farm. It wasn’t until she met Ethan that she learned about raising cattle beef. Ethan, a former wrestler at Penn State, marvels at how she took to farming and juggles it with her career as a golfer and role as a mother. “It’s unbelievable how much she can get done in one day,” he says, looking at her admiringly.

On the surface, they are opposites. An imposing 6-foot-1 with a red beard, he looks like a butcher out of central casting. She is 5-foot-2 with a dark brown ponytail that flies in the air as she bounds around. He is quiet and shy. She is so vivacious and outgoing that her caddy calls her “the senator,” a nickname that stuck on the tour. “Pre-COVID, I was kissing babies and shaking hands,” she says with a laugh.

But the couple, who live in a cabin on the edge of the woods, are a great team as they work together to balance family life with two challenging professions. Farming and golfing are both hard ways to make a living — capital-intense vocations where you only earn if you produce. 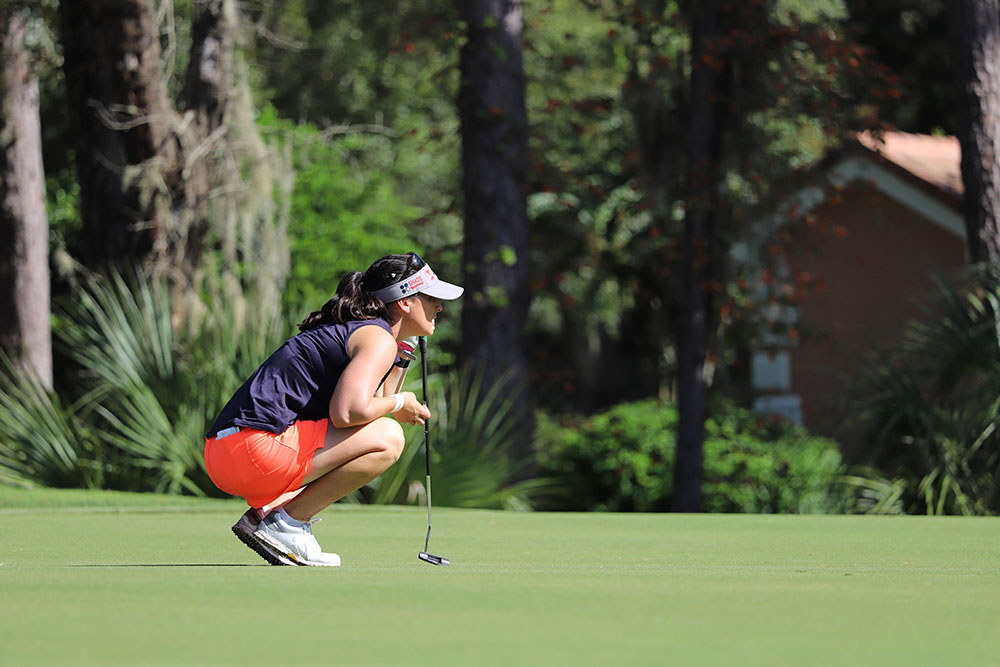 In a mental game like golf, overthinking has sabotaged many a clutch moment. The uncertainty of the pandemic has added another level of pressure, with tournaments being canceled or delayed and players going in and out of quarantine. Rohanna says being a mother and cattle farmer has helped her keep a sense of balance.

“In golf, you are out there for five hours and it takes two seconds to hit a shot. There is a lot of time to think about it and a lot of mental stress,” Rohanna says. “Golf used to consume me. Having a kid takes your mind off a lot of things.” 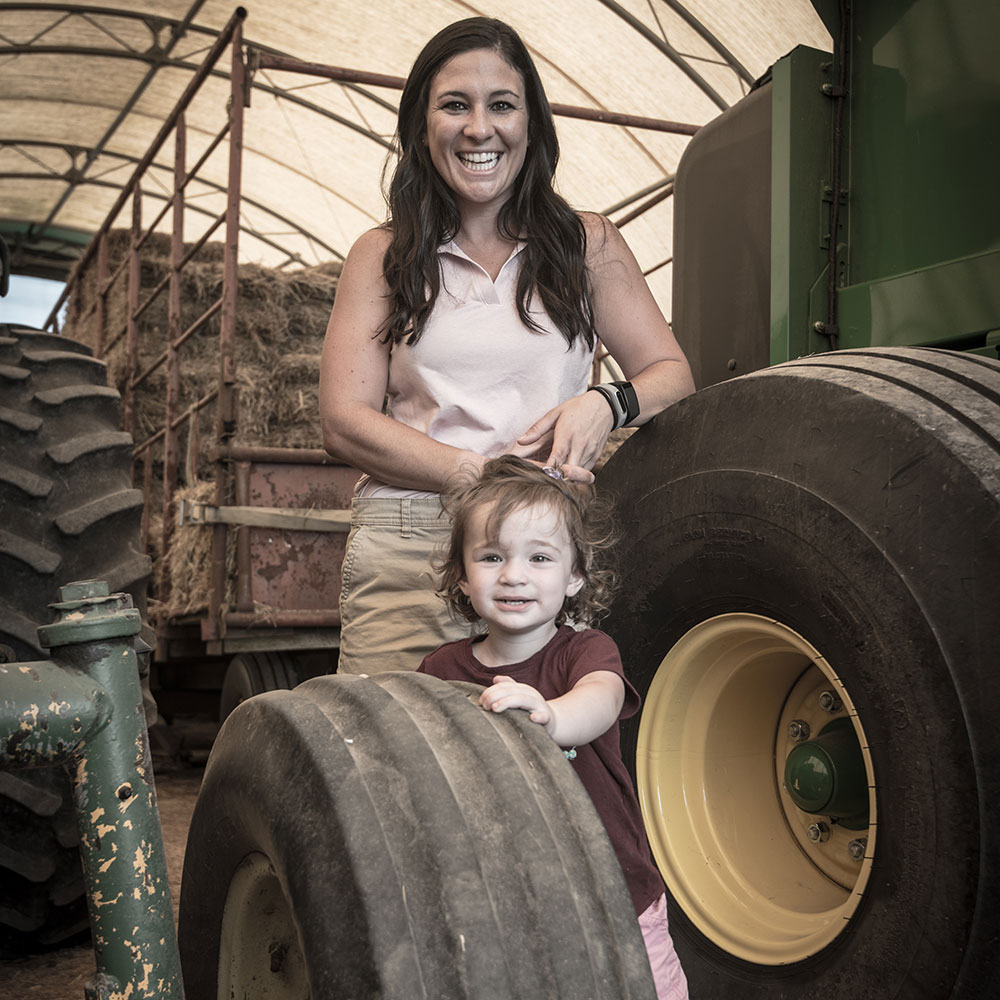 RACHEL ROHNANNA SAYS HER DAUGHTER, GEMELIA, IS HER GOOD LUCK CHARM ON TOUR.

Gemelia, her daughter, has always been her good luck charm, clapping as she watches her mother come to the 18th hole during some tournaments. The toddler is also tagging along for the remainder of this abbreviated season, with Rohanna’s parents there to watch her.

After a four-month delay due to the pandemic, Rohanna traveled to five tournaments in four weeks. As she zigzagged from Ohio to Michigan to compete in both Symetra and LPGA tournaments, she timed her driving schedule with her daughter’s naps.

Even with tournaments resuming, everything is far from normal. Rohanna misses fraternizing with her golf friends, which is discouraged during the pandemic, and the sound of the gallery cheering her on. Golf, like other pro sports, is played in eerie silence.

“I am someone who feeds off of cheers. We are entertainers. I like that part of the job. We love to get young girls into the game.” 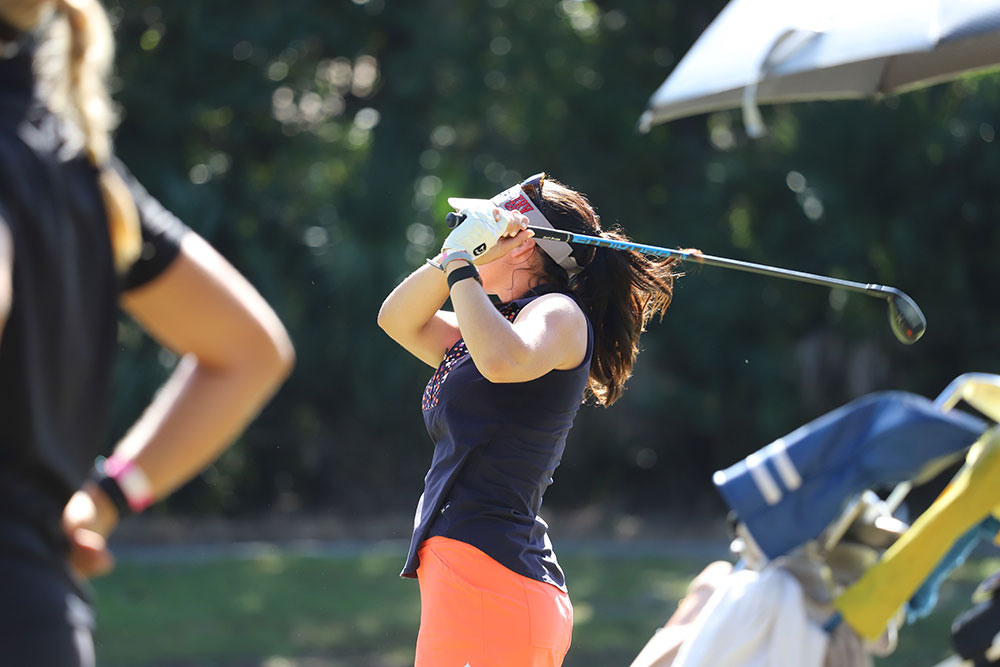 In elementary school, Rohanna was already determined to become a pro golfer. She started swinging her clubs at age 8. When people asked her what she wanted to be when she grew up, she would declare her plan to golf professionally as matter-of-factly as other kids would say they wanted to become a firefighter or teacher.

Rohanna had no idea it was such a longshot career, having grown up with golf-pro grandparents, Dick and Roseann Schwartz. Dick was on the PGA tour during the era of Arnold Palmer and Jack Nicklaus and later became a club pro — and Rohanna’s swing coach. Roseann was an LPGA-certified teacher and the women’s golf coach at Youngstown State University. They would take their granddaughter to LPGA tournaments in Youngstown and she would volunteer, holding the scorecard for a group. At age 13, she didn’t want to spectate. “I was so mad that I was not playing,” she says.

In Waynesburg High School, there were not enough players to field a boys’ team, let alone a girls’ team. So the 14-year-old Rohanna went door to door. “Would you guys please join the team?” she begged until she scraped up enough recruits. The novice team only won two matches the first year, but by her junior year, they lost only one match.

She further distinguished herself at Ohio State University, where she was named a First-Team All-Big Ten performer twice. 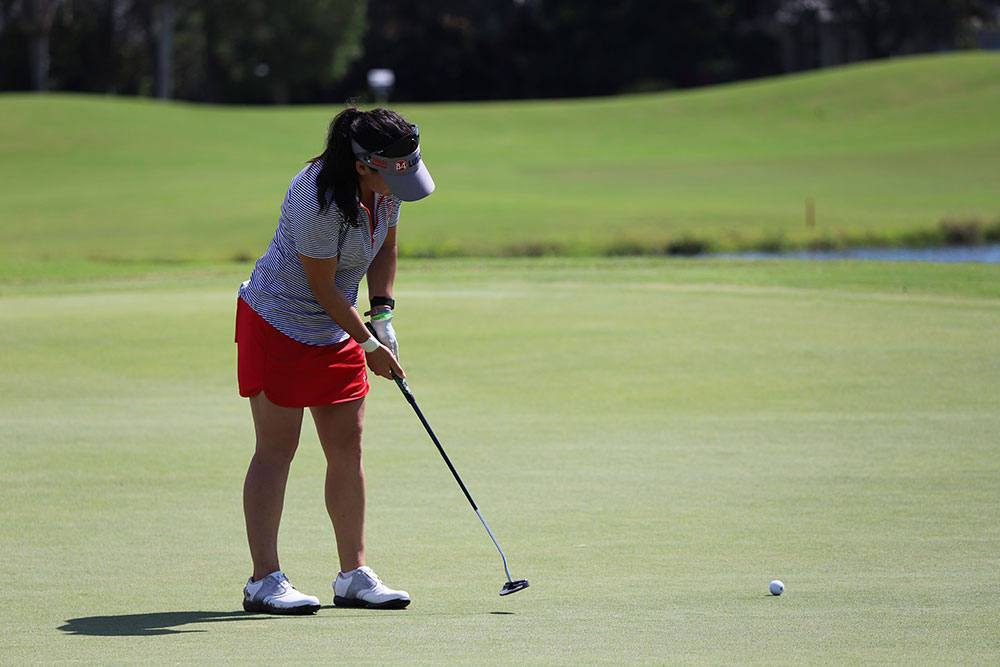 Going pro in 2013 was an adjustment. She started off on the Symetra tour, which she likened to the AAA branch of the LPGA. She was on her own. There was no one to tell her to register for tournaments, and the level of competition was intense. She kept improving and broke into the LPGA in three years.

At the end of that season, she got a surprise: She was pregnant. She became one of only a handful of female pros to have a child, and she wasted no time getting back to competition. “It was nuts,” she says. “She was less than a month old and here I am trying to play a golf tournament. It didn’t go well. I didn’t make the cut. But I was respectable.”

As she settled into her dual roles, other golfers would come up to her and ask her questions about the juggling act. Some began to realize that motherhood and golf were not mutually exclusive. “It was cool — there has been a baby boom,” she says. “Every time you looked around, there was another player pregnant.” The LPGA even offers free daycare, sponsored by Smuckers. 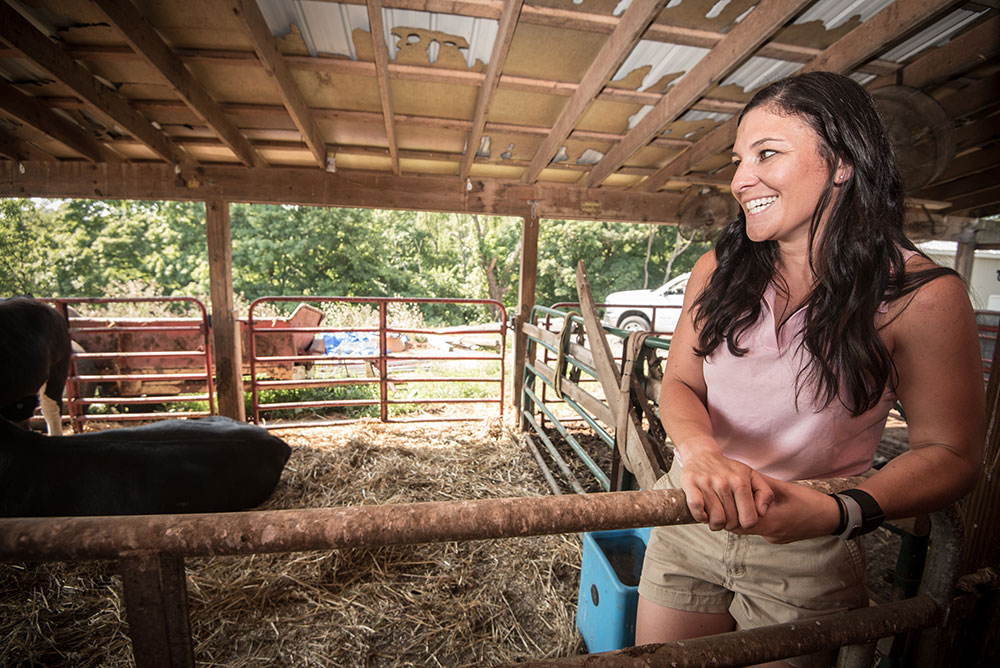 While it hasn’t always been easy, Rohanna makes it work with the help of her husband and a close-knit extended family. She says she has been fortunate to have two sponsors in 84 Lumber and First Federal Bank of Greene County. “You can lose money playing golf. I have been lucky.” Though her earnings have topped $100,000 in her best year, she figures she spends $40,000 to $60,000 just to play — between travel, paying her caddy and other expenses.

There is also the constant pressure of making the LPGA cut. After traveling with her infant last year, she just missed it, a huge disappointment. She hopes to regain her status this year. She’ll be able to play in some LPGA tournaments, which have more openings this year due to COVID-related quarantines and travel restrictions.

Her grandmother, Roseann, says, “Golf is 80 percent in the mind. The game can be mean, but she doesn’t feel sorry for herself if things don’t work out. She thinks creatively.”

Rohanna hopes to continue as a pro golfer for decades and eventually join the senior tour, which begins at age 45. “This is my career. This is what I do.”

The Maine Event: This Fighter Won't Quit on Her Dream