The late Myron Cope was family in Pittsburgh, in western Pennsylvania, in the company of Steelers’ fans everywhere. How he came to exert such a powerful hold on people who did not know him personally is a mystery he carried to his grave. 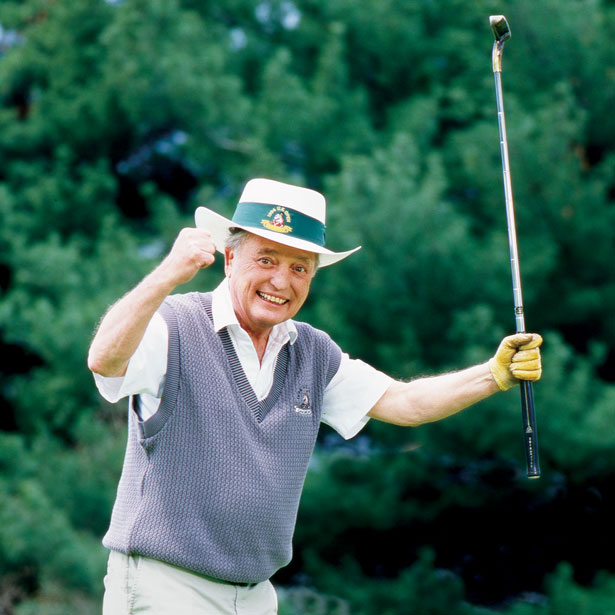 This article was originally published in the October 2010 issue of Pittsburgh Magazine.

On the day Myron Cope died, I thought about the letter. The letter was more than 20 years old, but I knew I had it somewhere. This was the kind of letter you didn’t throw away. And I thought about it when I learned of his death, because it told me everything I needed to know about Myron Cope. No, it wasn’t from Cope, although I do have a few of those, too. He would write to me on occasion because, at that time, part of my job was to write about him. As a sportswriter who covered TV sports for The Pittsburgh Press, it was my responsibility to cover Cope’s on-air performances. Which meant: criticism when it was warranted, praise when it was merited.

Not a bad job, but for someone new to Western Pennsylvania, it required me to adjust to Cope’s unique style and personality, which everyone else seemed to understand almost by reflex.

So, after taking Cope to task for being on the wrong side of an on-air argument with sportscaster Bob Trumpy (and a former player for the “Cincy Bungles,” of all teams), I got the letter. “You would be wise to temper your criticism of Myron Cope,” the writer warned. “You are the new boy. Myron Cope has done more things in a year than you in your whole life. It is not wise to criticize Myron Cope in this town.”

My wife detected a sense of menace in the message, but I have never read it that way. The handwriting was neat; the name and address readily given. This wasn’t a threat; this was free advice.
Cope, as it turns out, could take criticism. “Being imperfect, I suppose I should expect imperfect grades,” he once wrote in one of several personal notes he would send me after I had written something about him.

But it says something that his public couldn’t bear to see him criticized and could be as protective of him—an accomplished, intelligent and wealthy man—as they would have been if he had been a younger, more vulnerable member of their own family.

That is the point, you might say. Cope was family in Pittsburgh, in western Pennsylvania, in the company of Steelers’ fans everywhere. How he came to exert such a powerful hold on people who did not know him personally is a mystery he carried to his grave. And beyond, actually. Two days after he died in February of 2008, an estimated 300 Pittsburghers stood in the snow and cold in downtown Pittsburgh to wave their Terrible Towels one final time for Cope. At the ceremony, one speaker even talked of building a statue of the local legend outside Heinz Field.

“If you don’t get Myron, you don’t get Pittsburgh,” one of the speakers said that day in a defiant tone that Cope seldom used. It was a sentiment that the crowd agreed with heartily, to judge by the response.

That’s the accepted wisdom, of course. Cope was not of Pittsburgh: He was Pittsburgh. One in a series of unique Pittsburgh phenomenons, except that he was truly unique. It wasn’t like Pittsburgh potholes—(lots of cities have potholes)—or the “Pittsburgh tradition” of using folding chairs to save parking spaces—(you can see that in lots of cities). But no other city had Cope. Probably no other city could.

Other cities have their local favorites on TV and radio, of course: personalities who rise to local stardom because viewers and listeners see something of themselves in them. In Cope’s case, it worked the other way around. He shaped his on-air personality to fit us. He saw something that he liked in Pittsburghers and made it a permanent part of his shtick. He created someone who, even in being imperfect, could exhibit all the characteristics Pittsburgh valued: loyalty, generosity, emotion, wit and wisdom. And all of this was displayed in a theatrical, yet unpretentious fashion. He was unfailingly courteous in a medium (talk radio) that didn’t reward it. And still, he was rewarded, often and always.

He flattered us by being us. Or, by being an extension of his true self. Or, some combination of the two. It’s likely Cope never tried to figure it out. As intelligent as he was, he preferred things simple. That was one of his charms, actually.

Among the better stories Cope told about himself concerned the creation of the famed Terrible Towel. He was asked by WTAE Radio to come up with a gimmick for an upcoming Steelers playoff game, and he responded by insisting he wasn’t “a gimmick guy.” When he was reminded his job might be at stake, he promptly adjusted his attitude. “‘I’m a gimmick guy’ I told them.”

Not a gimmick guy? Why, practically his entire on-air persona was a gimmick: the screechy voice, the catchphrases, the exaggerated enthusiasm. So was the character “Myron Cope,” if you will. And, yet, despite the obvious theatrical nature of much of what he did, there was no denying the persona’s authenticity. He used gimmicks, but they came from a real place.

Was the on-air Cope like the off-the-air Cope? That was a question that fascinated many. And it was a question that was extremely hard to answer. He was certainly less animated in person, often more serious and usually less hungry for attention. And yet, he could be all of those things, and more, even in private conversation. He wasn’t putting on a show, but you could sense he had lots of “show” in him.

The idea that this man could someday have a statue alongside that of Art Rooney is almost absurd when you think about it. He didn’t play the game, he didn’t coach the players, he didn’t even call the action. In theory, at least, his role on Steelers’ broadcasts was to be second-banana to his play-by-play partners, Jack Fleming and Bill Hillgrove. Late in his career, he even took a back seat to color analyst Tunch Ilkin. And, somehow, despite all of that, he personified the team for generations of Pittsburghers.

It could be said that, in professional terms, Cope was the luckiest of individuals. This Pittsburgh native was a star journalist in the golden age of magazines in the 1950s and 1960s. He joined the Steelers’ broadcasts just as they started to win Super Bowls in the 1970s. He hosted a sports talk show when that format was hard to find on the radio dial. To imagine that a radio broadcaster could become an integral part of a pro-football team’s identity in this media-saturated era is preposterous. What would Cope have said? “Gorgonzola!”

So he was lucky, yes indeed-ie. But the Steelers’ good fortunes were only a part of it.

Sometimes I even suspected that what Cope really liked best about the Steelers was not their on-field success, but rather their off-field appeal. In this region, the Steelers have become a vehicle that connects all types—young/old, rich/poor, smart/simple, male/female. For a few hours on a fall afternoon we share a commonality of purpose that seems impossible at other times. Caring about what a sports team accomplishes is trivial. Caring about the team is something else. Around here, it sometimes feels vital. Cope understood the concept and gave it voice. We listened and learned and won’t let it die.

Bill Modoono is a freelance writer who lives in Edgewood. He has worked as a sportswriter for the The Pittsburgh Press and the Pittsburgh Tribune-Review.

This article appears in the April 2008 issue of Pittsburgh Magazine.
Categories: From the Magazine, Sports