The Distant Past Moments from throughout the region’s history are recreated and explored at Meadowcroft — from the last century to thousands of years in the past. 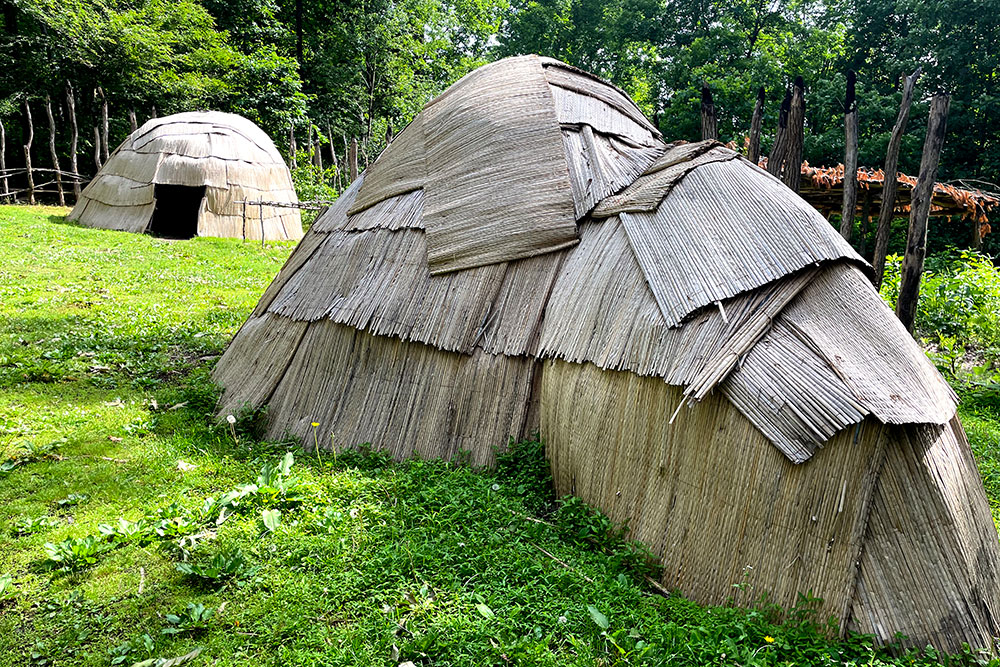 When you stand at the still-active archeological site at Meadowcroft, you quickly realize you have no frame of reference for the phrase “19,000 years ago.”

You’ll think about the oldest civilizations you can name. The ancient Romans? That’s about 2,000 years back. Ancient Egypt? 5,000 years. If that’s as far into the past as you can cast your mind, you’re still 14,000 years short of the time when people first sat under this rockshelter and made dinner.

This site, just outside Avella in Washington County, is the oldest known site of human habitation in North America. Evidence discovered here — first by a groundhog, who dug up some artifacts back in 1955 — suggests that groups of mostly nomadic hunter-gatherers lingered in this spot for shelter and protection; people likely stopped here to rest and eat for millennia. 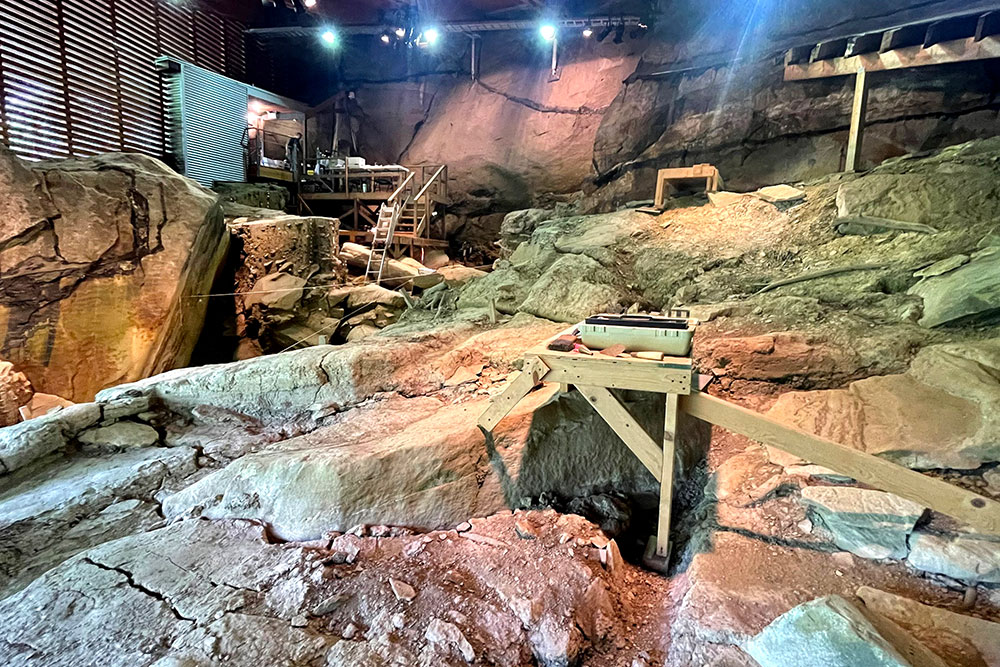 The site was once on the property of Albert Miller, who in 1973 began working with University of Pittsburgh anthropology professor James Adovasio on the first archeological examination in the rockshelter. (The groundhog had kicked things off 18 years earlier, but Miller, an avid naturalist and outdoorsman, opted to cover the site until a proper archeological survey could be arranged.) Work has continued ever since, as the site has yielded more artifacts and evidence continuously.

While the rockshelter is undoubtedly the most remarkable thing on these 200-plus acres, there’s plenty more to see — in fact, Meadowcroft opened long before the public could visit the rockshelter itself. First, in 1969, came Meadowcroft Village, founded by Miller and his brother, Delvin, a champion harness-racing jockey and the founder of the Meadows racetrack. After crossing a lovingly preserved covered bridge dating to 1871, guests can visit a one-room schoolhouse, a small church, a log home and a blacksmith shop. (Leave some time at that last stop; you’ll see a blacksmith in action and may even take home a small trinket.)

The overall aim at Meadowcroft, which is now operated by the Heinz History Center, is to demonstrate human habitation in this part of the country throughout the millennia. Key to the story, then, is the Monongahela Village down a quiet path from the visitor center. Every detail in this area, which depicts the lives of indigenous populations around the 1570s, is perfect, from the crafting of the small tools and items to the construction of the wooden fence that encircles the village. (Ask why the top of each post is burned.) Several times each year, Shawnee representatives are on hand to further explain and illustrate the history of the region’s longest-tenured inhabitants. 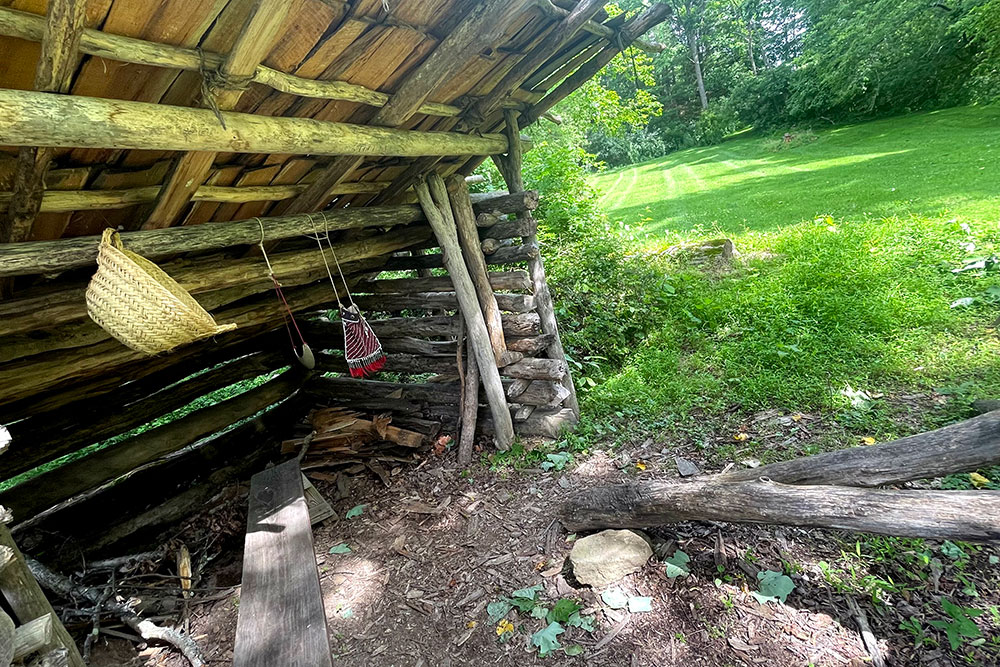 If you’re lucky, someone will be on hand during your visit who can expertly throw an atlatl — a spear-throwing device used extensively for hunting until the invention of the bow-and-arrow. Meadowcroft hosts an annual atlatl competition featuring the best hurlers in the world; anytime, though, you’ll have the chance to try it out for yourself. It’s harder than it looks, but even a novice might be able to at least graze a target after a few tries.

Meadowcroft also includes a 1770s-era trading post as well as a museum displaying farming implements, carriages and more — including a look at harness racing, in a nod to its co-founder’s sport of choice. This is no historical curiosity that you can see in an hour; it’ll take the better part of a day to see everything.

Fortunately, it’s a beautiful, peaceful place, as charming as it is fascinating. And, in the case of the rockshelter itself, mystifying; you’ll stare at the remains of a fire pit from 19,000 years ago, and feel the bizarre telescoping of time as the distant past is echoed in the present.

Know Before You Go
Meadowcroft is open seasonally from May through October; the site welcomes guests from Wednesdays through Sundays between Memorial Day and Labor Day, and on Saturdays and Sundays only at the beginning and end of the season.

Calendar.  Before you pick a date, look at the calendar of events. A visit is worth your while anytime, but aim for one of Meadowcroft’s signature events, such as the atlatl competition or the annual “Vintage Base Ball Day,” when competitors play the sport under late-1800s rules (and in period-appropriate attire). Certain weekends also feature additional educational opportunities and added historic interpreters.

Mobility.  The terrain of Meadowcroft may pose challenges for guests with mobility impairments. The rockshelter is not accessible for wheelchair users.

Phone.  Cell-phone service is limited at the site.

Picnic.  If you’re planning on a full day, you’ll want to bring a picnic lunch; guests are encouraged to dine on site (and there are some snacks and beverages for sale in the visitor center), but there’s no full meal service at Meadowcroft. Restaurants are a few miles away, as well, so plan your dining in advance.
heinzhistorycenter.org/meadowcroft
724/587-3412