The event, formerly dubbed Phantom Fright Nights, featured five haunted houses and a range of creatures creeping through the park. 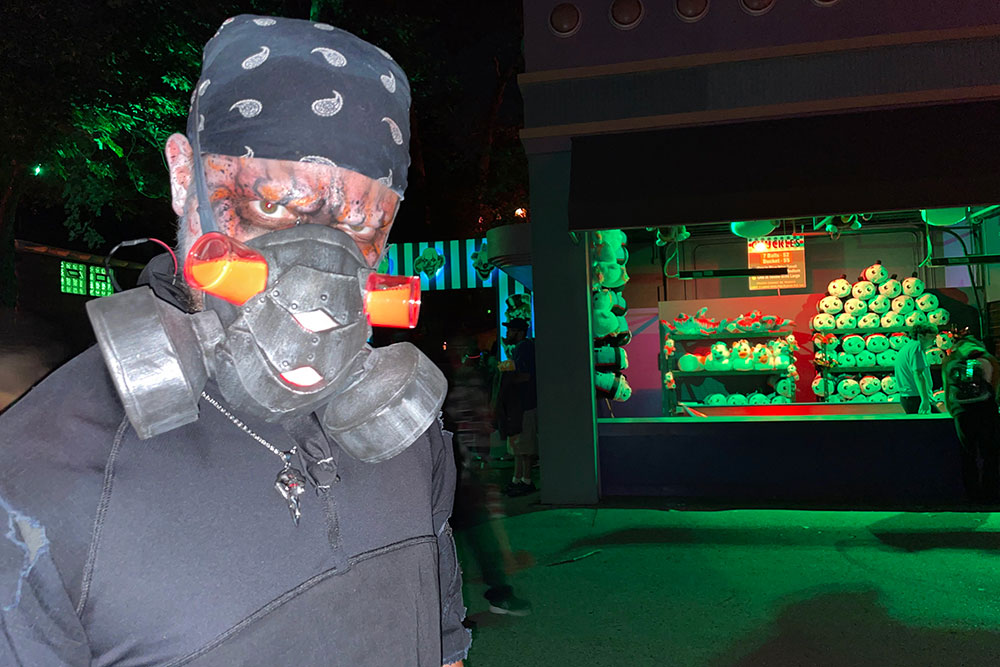 No series on Pittsburgh haunts would be complete without a visit to the Halloween-themed festivities at West Mifflin’s Kennywood Park.

The infamous Phantom Fright Nights began back in the early aughts, but this year, things looked a little different: Rebranding as Phantom Fall Fest, the park opens earlier in the day for family-friendly fun, including autumnal food, decor and, of course, rides aplenty. But once the sun goes down, ghouls prowl the park in four “scare zones” situated between five haunted houses: Villa of the Vampire, Voodoo Bayou, Kennyville Cemetery, Dark Shadows and Shady Grove (not to be confused with the Shadyside restaurant).

Fright Night — excuse me, Fall Fest — is the one local Halloween shindig I’d been to before, albeit many moons ago. Still, I’d never done the whole haunted house thing; I was always just in it for the roller coasters. (I may be a scaredy cat, but I’m a scaredy cat who likes thrill rides, because nothing will jump out at me and say “boo” halfway through a double-helix.)

I found that Fall Fest was, at times, markedly camp, with revving chainsaws and theatrical characters on the prowl beneath a haze of neon lights. There were moments of genuine spookiness, too, compounded by a dense artificial fog and the actors’ commitment to the bit. I never thought I’d be scared of a rubber chicken until a killer clown followed me with one, menacingly honking the thing as she drew nearer and nearer.

But as always, Kennywood delivers what it promises — memorable fun with a few scares along the way.

This time, I wasn’t flying solo; I brought my roommate and long-time friend Laura, another self-described scaredy cat who had politely declined invitations to Scarehouse and Hundred Acres Manor.

We started off at Villa of the Vampire, where you’re guided through what’s usually Kennywood’s arcade by a coven of vampires taking you to The Master (who may or may not turn you into a creature of the night). There are plenty of jumpscares to keep you on your toes, and somewhere inside, a vampire king sits in wait.

It’s worth mentioning that, if you’re a hardcore horror buff who wants to fit in all five haunted houses, you’d be wise to spring for a VIP pass. Laura and I opted for only general admission, and we could only manage two of the five themed attractions because wait times often neared or even surpassed the two-hour mark.

We arrived at 4:30 to do the ride circuit and get our fix of square ice cream from the Golden Nugget before nightfall, and we joined the Villa of the Vampire queue right around 6. It was about 7:30 before we made it to the front.

Children passed the time by gathering in a grassy clearing across from the stanchions. They played catch with a Thomas the Tank Engine plushie one of them had won in a carnival game, and catch quickly turned into a baseball match when one player introduced a plastic lightsaber. Adults passed the time by watching the game, placing bets on whether or not Thomas would get stuck in a tree. (Surprisingly, he did not.)

The long waits weren’t spent in boredom, but they were spent in line. With Saturday spooky stuff slated from dusk to the park’s closure at 11 p.m., a roughly-five-hour window doesn’t quite leave enough time to see all five haunts, hop on a few rides and grab a bite to eat.

A few of the park’s biggest rides weren’t operating, either. The Steel Curtain was closed for maintenance, the Thunderbolt was dark and the Bavarian Wave Swinger seemed to be inexplicably missing. (Nick Paradise, Kennywood’s director of corporate communications, told me it’s deconstructed every fall for inspection and offseason maintenance, and that it’ll return in the spring.) But all this made for fewer options and longer queues at the rides and attractions that were in service.

It was a fine set-up for us cowardly — and patient — amateurs, but more seasoned haunt aficionados may find it worth their while to splurge on the special passes that let you bypass the line.

The other haunt we managed to squeeze in was Voodoo Bayou, which had caught Laura’s attention straight away. It made great use of the environment it already had available in the Raging Rapids, drained but perpetually damp and lined on all sides by foliage and rocks. There was something naturally eerie about it — and plenty of things that were unnaturally eerie. As you walk through, camouflaged creatures and voodoo priestesses conjure up the dead to prey on the living — or more specifically, to prey on you.

I pointed to a facsimile of a skull mounted on a stick and began to chant, “Sacrifice, sacrifice!”

What started off as an attempt to creep out Laura backfired quickly when one of the creatures overhead me, and suddenly I’d volunteered to become a sacrifice myself.

“Sacrifice!” the creature stalked toward me. “A sacrifice!”

“Oh, no, never mind. No, thank you!” I backtracked. “I believe there’s been a misunderstanding.”

And that was an understatement.

Even after we cleared that section of the haunt, we could hear the creature assailing other guests with a savage plea: “Sacrifice, sacrifice!”

Laura turned to me, laughed, and said, “Next time, keep your mouth shut.”

If you take a trip to Voodoo Bayou and are asked to make a sacrifice — or worse, become one yourself — I guess you know who to blame for putting that idea in the priestess’ head. Sorry about that.