In exploring one last haunted house before Halloween, I found a hidden gem in Ellwood City. 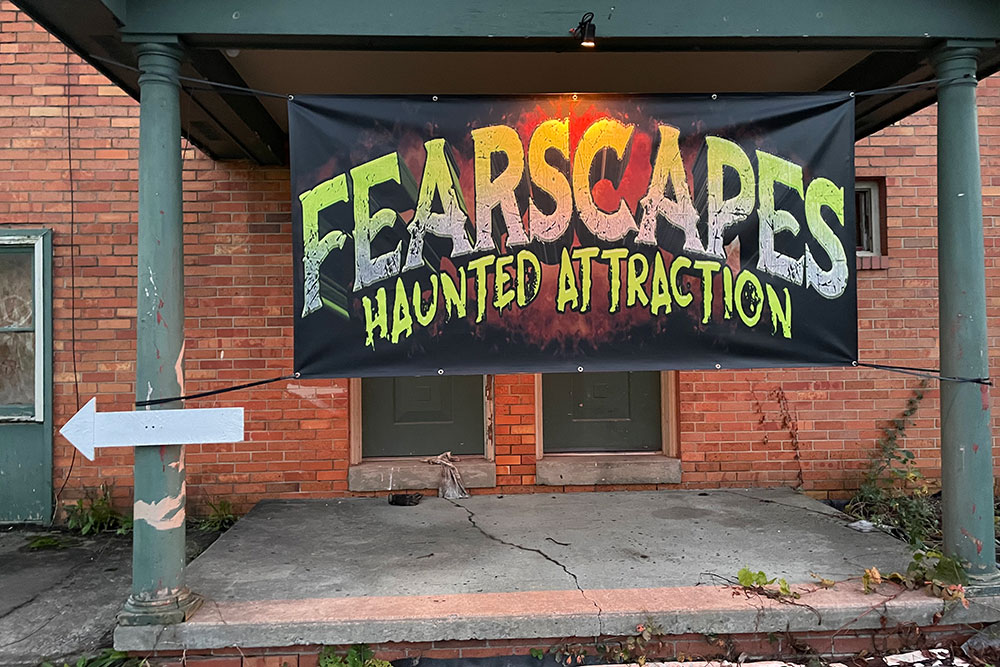 It was finally cold enough to feel like autumn after a long and sweaty Applachian summer, and the seasonal chill was the perfect backdrop for my fourth and final haunted house excursion. As someone who, until a month ago, had actively avoided all the things that go bump in the night, I’m hardly an expert. But nevertheless, I think this haunt just might have been the best one yet.

About an hour outside of Pittsburgh, FearScapes sits tucked away in Ellwood City, situated within what looks like some sort of abandoned industrial complex. It has a rural and enigmatic feel to it, aided by the natural eeriness of its surrounding woods and the gray, moonlit sky above.

When you turn into the parking lot off of Brentwood Avenue, you come first to a brown brick building with a spooky, disused facade and a towering alien stature enveloped in a green glow. A banner on the front of the structure professes FEARSCAPES: HAUNTED ATTRACTION, in case the alien didn’t give you a clue as to where you were, and an arrow points you down a small slope toward the action.

Passing a few empty cargo bays, you come to a pair of outhouses and a table setup, where you can grab a bite to eat from PJ’s Deli, Catering and Bakery before (or after) braving the haunt. From there, you’re guided down a tree-lined path to buy your ticket, take your place in line and await your dismal fate as a victim of The Void.

I developed a rapport with the pig man. That isn’t a sentence I ever thought I’d write as a journalist, but here we are.

The pig man, dressed up in a dark trench coat, a barbed-wire necklace and a bloody septum piercing inserted through his snout, patrolled the stanchions as visitors waited to be admitted into the haunt, group by group. Again, I’d come alone, and the pig-man noticed.

“What’s the matter?” he sneered. “Couldn’t convince anyone to come with you?”

“Dying alone. That’s sad,” said the pig-man, and I had the feeling he didn’t actually pity me all that much. “I bet you thought you’d be 67 with some cats before that happened.”

“Oh yeah, at least 10 cats,” I agreed, playing along partly because I liked the bit and partly because I’ve never shut up once in my life. “I’ve only made it up to two.”

After the pig man offered to buy the giggly teens from the parents in front of me for a grand total of $666, he crept up behind me, and I quickly turned around. I told him I didn’t trust him, and he began to copy my movements. Two could play at that game, I thought, and so I copied his. We found ourselves locked in a socially distanced mime act that ended when I mimed a secure box around myself and he said he didn’t want to enter it anyway.

“You’re all right,” he told me a little later, before adding, “You know, for a human.”

The line never got too long, and the pig man kept things interesting while we waited. Any considerable time spent standing by was largely due to the fact that only one group was permitted to enter at a time — a tactic that seems effective in ensuring maximum fright, especially if you’re dumb enough to fly solo like me.

When my turn came, a slightly mutated construction worker admitted me into the first room of the haunt, where a skeletonized corpse explained the premise: FearScapes is a research facility gone wrong following a containment breach, and the plant’s personnel were trapped inside with whatever horrors were conjured up from The Void. Among these impish frights are Krampus and his minions, a devilish clown and a sideshow act called the Stolen Stitches.

The experience was absolutely unique; visitors are guided into a box that simulates the shaky elevator ride into the facility, adding another layer to the haunt that more traditional walkthroughs lack. The Stolen Stitches, too, offered up a memorable, vaudeville-Esque performance complete with fire-eating and other illusions, and the characters throughout interacted with guests more directly than they had at any of the other locations I’d visited.

In one room, you’re asked if you think you can actually defeat The Void, and an arcane actress offers you a tarot card to predict your fate. Based on her maniacal laugh as she permitted me passage into the next room, my prospects seemed rather bleak. In another section, a menacing clown tells you you have to find the red button before you can escape his lair. (No, I won’t tell you where it is.)

The further I ventured into the bowels of the FearScapes, the more it felt like a descent into madness. It combined the traditional interplay between colorful lights and fog-laced darkness with unique twists along the way and a set design that’s as dazzling as it is diverse. There are jump scares — it wouldn’t be a haunted house without them, after all — but FearScapes is so much more than that. It’s performance art. It’s immersive theater. It manages to combine the science-gone-wrong trope with supernaturalism, myth and vaudeville without ever feeling disjointed or modge-podged together. And at $15 per ticket, a much lower price point than most of the other haunts, it’s absolutely worth the drive.

As I walked back to the parking lot after successfully surviving this hidden gem, I passed a couple who were on their way in. They asked me if it was scary, and I assured them that it was. They noticed, like pig-man, that I was on my own, and joked that they could never do a thing like that.

“It’s cool that you do these by yourself,” said the man, who told me he was from Ohio, but showed me his Steelers sweatshirt, too, when he noticed the Pennsylvania license plate on my car. “It takes guts!”

They wished me a safe drive back to the city, and I wished them a fun — and scary — evening at FearScapes.

As I winded down the dark roads en route to Interstate 79, I felt strangely accomplished. Like the cowardly lion who set out for Oz in search of courage, I was the cowardly writer who set out into the night in search of the very same thing. And even though I didn’t know it at the time, I found it, somewhere between ScareHouse at Pittsburgh Mills and a hidden gem off in the corner of Ellwood City.

I may still balk at the thought of scary movies and I may still delegate spider-handling duties to my roommates, but at least I can officially say I get what all this haunted house hype is about. And along the way, I’ve managed to convince a few folks I was brave enough — or maybe just insane enough — to take on Pittsburgh’s most popular haunts alone. Maybe next year, I’ll be able to convince my friends to brave them with me.

Editor’s Note: This article was updated from its original posting in October of 2021.