Excellence in Nursing: Meet Our 2018 Honorees

Pittsburgh Magazine highlights the unsung heroes of the health care field:our Excellence in Nursing honorees, chosen by our panel of distinguished judges in the field. 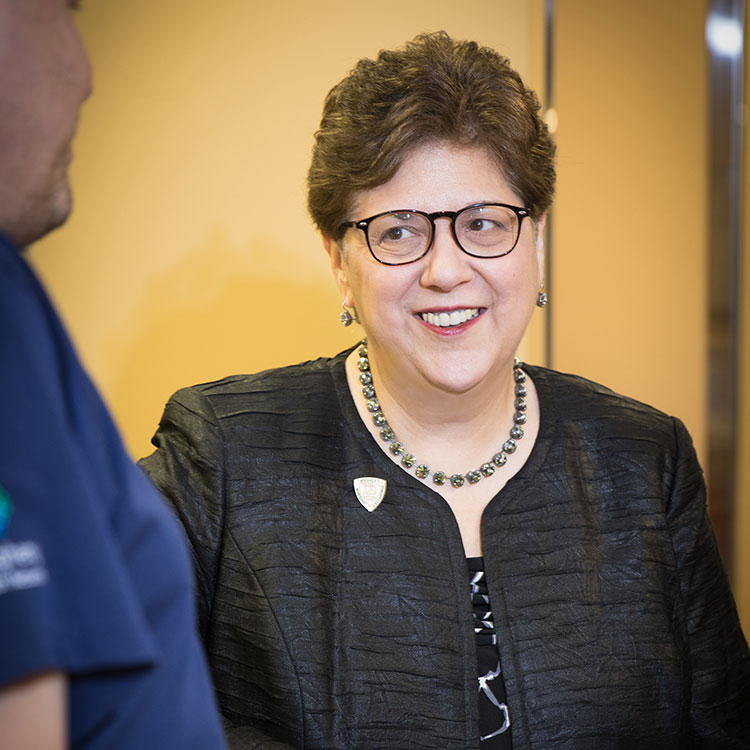 Jacqueline Collavo was with West Penn Hospital when the facility became the first in Pittsburgh to earn Magnet designation, the most prestigious distinction a healthcare organization can receive for nursing excellence. She also was there a few years later when the hospital faced closure before Highmark acquired the West Penn Allegheny Health Network and created the Allegheny Health Network.

Several more years and two additional Magnet designations later, which she was instrumental in helping the hospital obtain, Collavo, of the South Side, remains at the place where she began her career as a summer aide in 1979. West Penn’s chief nursing officer says the culture is what’s kept her there through the ups and downs. “We have a culture of transparency, honesty, collaboration, teamwork and trust,” says Collavo.

Collavo, whose mother Dorothy “Penny” Collavo also was a longtime West Penn nurse, was working as magnet program director on the neonatal intensive care unit in 2006 when the hospital pursued and was awarded its first Magnet designation, awarded by the American Nurses Credentialing Center. Her interest in quality care, safety and patient satisfaction led her to become the hospital’s Magnet director.

When Highmark bought West Penn, as nursing director, Collavo was instrumental in “bringing the hospital back to life.” It gained its second Magnet designation, and Collavo went on to become chief nursing officer in 2016. A third Magnet designation came in 2017.

In her leadership role, Collavo is passionate about staff engagement. She attends orientations, helps with patient care and makes sure the nurses know who she is. “I tell nurses all the time: seize the opportunities and learn and grow,” says Collavo, who’s also earning her doctorate degree. “There’s so much you can do with nursing.” 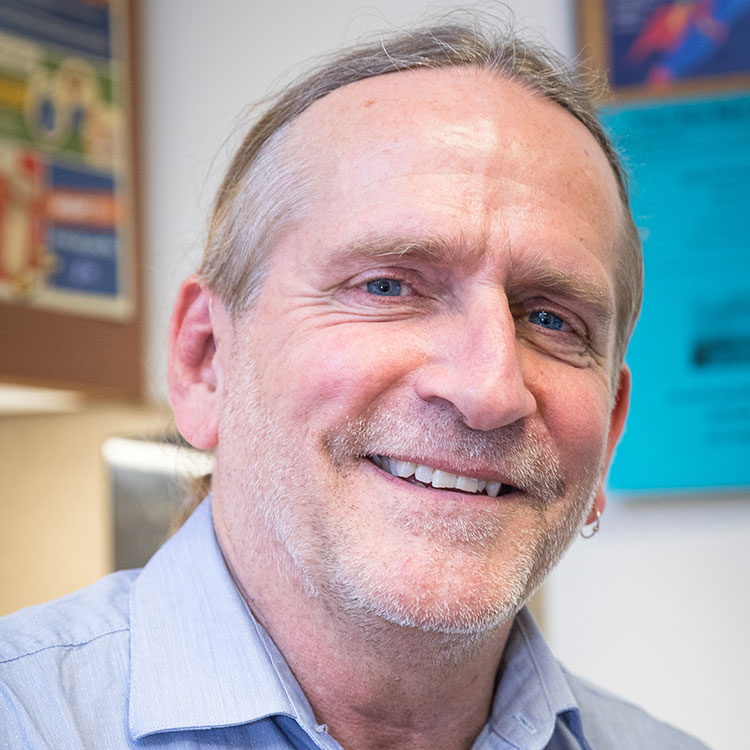 Stuart Fisk, who has dedicated his career to helping socially and economically marginalized people, often is asked if his work can be disheartening. The work isn’t sad, says Fisk, director for Allegheny Health Network’s Center for Inclusion Health. The broken system aimed at serving such people is.

“Our healthcare system can be very frustrating and very confusing for people, and changing that system is very slow and very painful,” says Fisk, of North Point Breeze, who began his career in 1988 in San Francisco doing AIDS research.

After caring for his own roommate who died of the disease, Fisk attended nursing school, then worked as a hospice nurse in San Francisco’s gritty Tenderloin district where single-room occupancy hotels served as housing for members of marginalized populations, many with HIV/AIDS who were not getting care. “I credit those people for really teaching me not only how to be a nurse but to a larger degree, how to be a human being,” says Fisk. “That’s really fueled my career.”

Fisk came to Pittsburgh in 1996 and started to work with then West Penn Allegheny Health System, now Allegheny Health Network. He started an HIV program in 1998. The idea for the Center for Inclusion Health, formed in 2014, came from a desire to identify populations within AHN facing significant barriers to care and change things throughout the system to better serve them.

Fisk says his work is about meeting patients where they are without an agenda or judgment. “We’re really coming to them to find out where they want to be, what they’re doing in their life that’s causing risk and giving them the tools to reduce that harm,” he says. 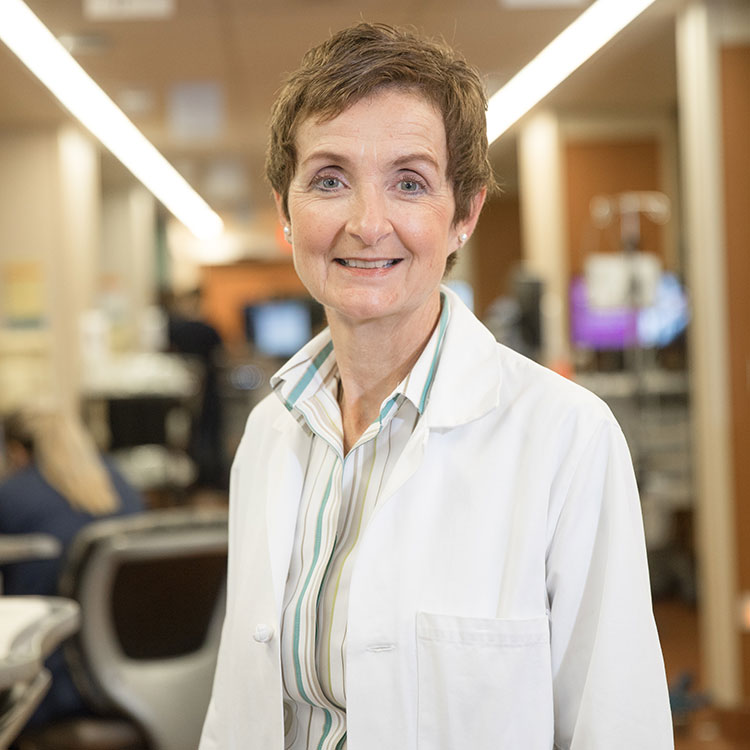 When Betsy George graduated nursing school, there weren’t as many job openings as there are today. Luckily, the job she did find working as a staff nurse in the critical care unit of Presbyterian University Hospital was a perfect fit that shaped the rest of her career.

“In critical care, I felt that I had to focus. I felt that I was constantly learning something and I continue to learn,” says George, of Upper St. Clair, now a UPMC programmatic nurse specialist – critical care. “You are able to focus in on a couple patients in a lot of detail and that was appealing to me.”

George went on to become an educator in critical care and unit director before taking her current role. Her position includes a wide range of responsibilities related to policy, procedures and professional development of staff. A key area of George’s focus is evidence-based practice and she works to ensure nurses are educated in and applying those principles at the bedside. The opportunity it affords her to help nurses so they can best serve their patients is George’s favorite thing about her position.

“If you are able to help the nurses with their education or with their challenges in their day-to-day activities to try to provide the best care they can to the patients, that’s what it’s all about,” she says. 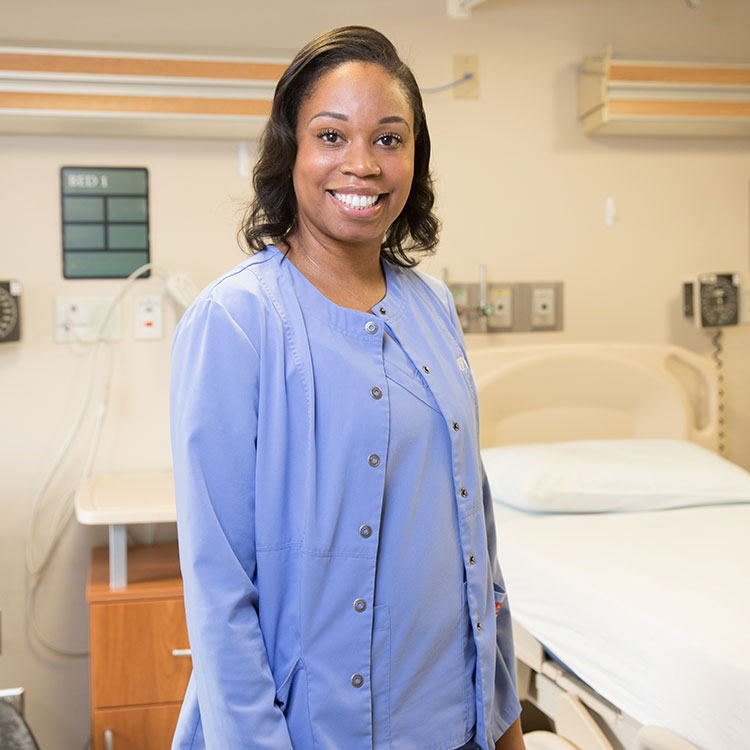 For Alison Davis, the most rewarding part of work is knowing that her team has played an integral part in giving patients a second chance at life. Davis is unit director of a transplant and artificial heart unit at UPMC Presbyterian Shadyside. She says the relationships she and her staff build with patients are what matter most. “Seeing someone come post-op from a transplant and transition to going home and being able to care for themselves is always such a joy to me,” she says.

Davis, a Morningside resident, manages the care delivery for patients on a transplant unit specializing in cardiothoracic surgery and patients with left ventricular assist devices. She manages staff and ensures everyone has the educational and physical tools they need to do their jobs well. Davis also meets regularly with the multidisciplinary team to make sure patients are getting the best possible care. She’s also often involved in improvement projects.

“That’s really what I love do — looking at a process and seeing how we can either improve communication or improve care delivery and how we can do within the limitations of what we have,” she says.

Davis’ staff sees her as a clinical expert, and she often leaves work at her desk to go onto the unit to support new staff members. She originally considered coming to Pittsburgh because her sister lived here at the time. During one visit to see her sister, Davis interviewed at UPMC, accepted a position in the transplant ICU, and has never looked back. 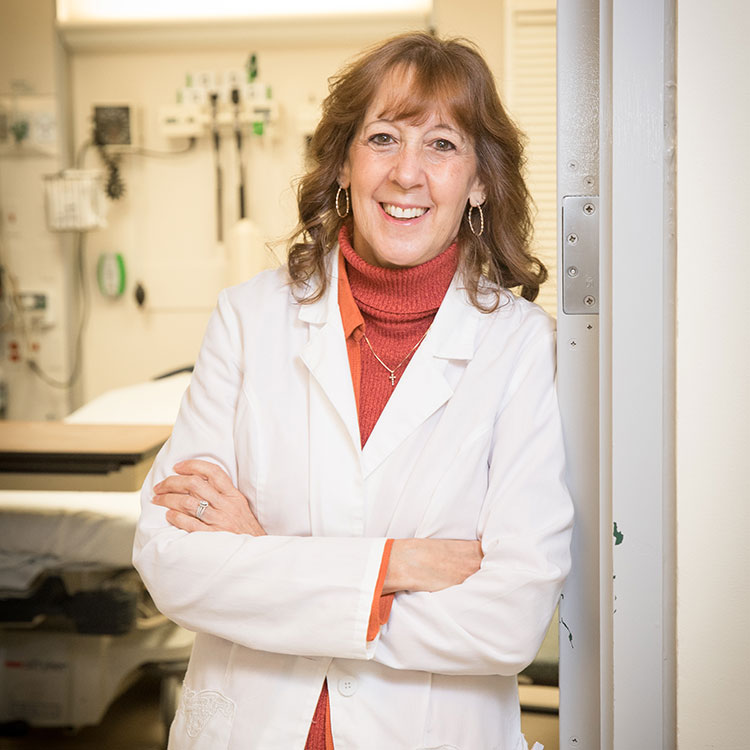 Two years ago, Kathleen Garove attended a talk on human trafficking at a nursing conference in the Poconos. She wondered why the topic was being discussed at an event in Pennsylvania. Surely, they’d be looking at how it affects other countries, she assumed. “I walked out of there in shock,” says Garove, of Hickory, Pa. “It’s right here in our backyard. That’s why they call it ‘hidden in plain sight.’ If you’re not looking for it, you don’t realize that’s what it is.”

Garove, emergency room clinical educator at St. Clair, began researching the issue and developing ways she and her staff could work to help victims who come to the hospital. She trained her team as well as EMS and case management staff on signs to look for, questions to ask and how to offer help.

Garove says the training has helped even outside the ER. Some of the nurses told her they recognized behavior among their own children that could have put them in a dangerous situation. “If we can help anybody, anywhere, any way — even if we can prevent someone from getting caught up in it versus rescuing, it’s clearly worth it,” Garove says.

Garove’s position also includes helping staff with orientation, new equipment and process updates. Her job is to guide the department through change, which is a constant in the ER.

“When I teach them something and they get out there, try it and see that it works and it’s really impacting our patient care, that’s just a wonderful feeling,” she says. “To me, that’s very exciting.” 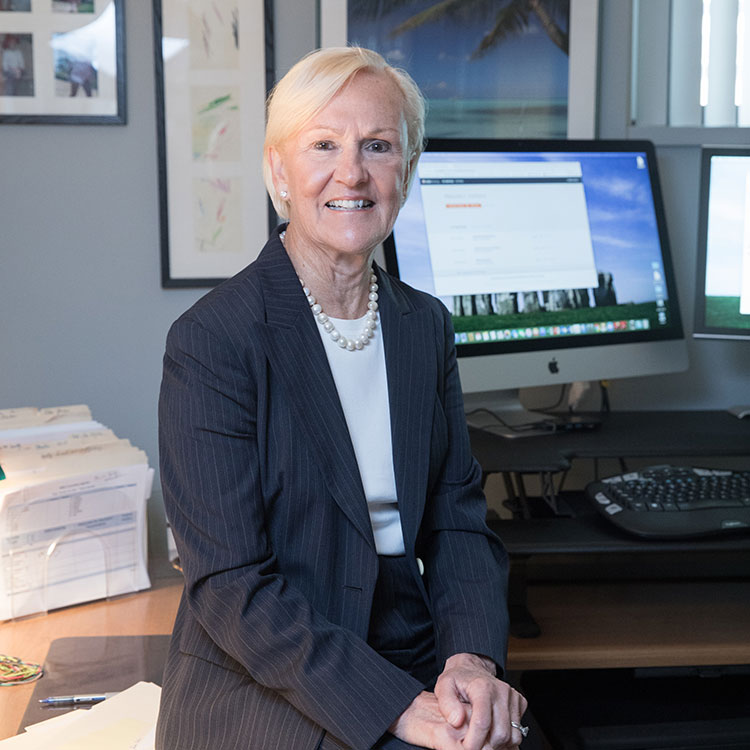 Students of Duquesne University’s graduate forensic nursing programs are using their passion and expertise to grow the relatively new field in creative ways. “They create their own roles, and they have really made so many advances in getting forensic nurses into all areas of healthcare,” says Kathleen Sekula, a professor in the School of Nursing who developed the programs.

“That’s what’s most exciting for me — to see forensic nursing at the advanced practice level grow in the way it’s grown in the past five, 10 years.”

Sekula, of New Kensington, is internationally regarded as a pioneer in her field. She joined the Duquesne School of Nursing in 1998 and served as a psychiatric mental health expert and therapist. In 2001, the university asked her to develop a graduate program to interface with the Cyril H. Wecht Institute for Forensic Science and Law.

The graduate forensic programs have grown to include doctoral programs. They are among the most popular programs at Duquesne and throughout the forensic nursing community. “We have to choose wisely when selecting students,” says Sekula. “We have to keep it at a number we can manage. We do that very gingerly and try to serve as many students as we can.”

Because the programs are online, students apply from all over the country and even some who are active duty military. Sekula loves seeing how their work impacts those who are victims of violence. 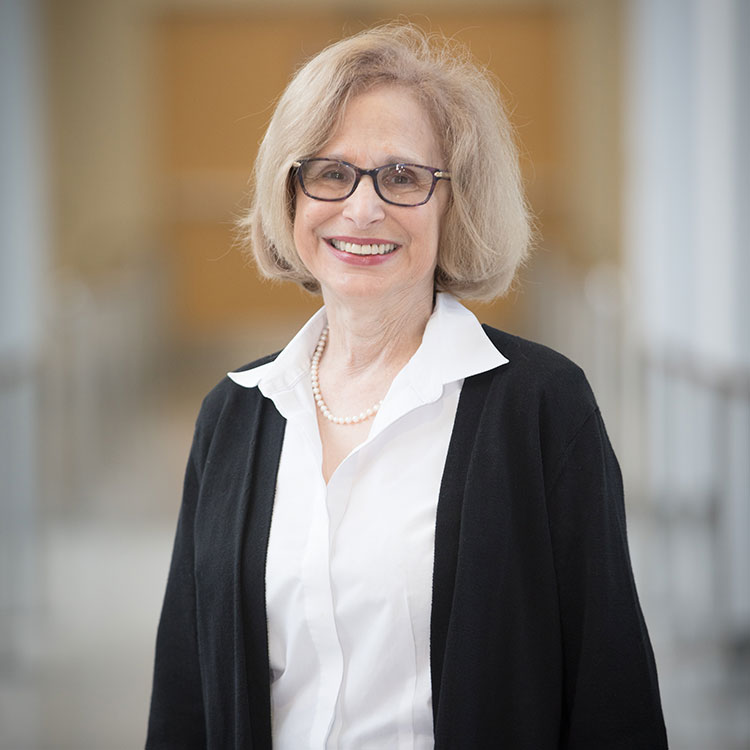 Eileen Chasens knows the importance of a good night’s sleep.

The focus of the University of Pittsburgh professor’s research is the effect of sleep disorders on management of type 2 diabetes. Chasens, who currently is funded by National Institutes of Health, has been doing the work for 20 years. “Taking care of a chronic disease takes a lot effort from the individual,” she says. “We know when you don’t sleep well, your motivation is decreased.”

In the classroom, Chasens teaches across all levels, everyone from freshmen to doctoral students. When she came to Pitt in 2004, several factors made it her ideal university home. “One was the School of Nursing,” she says. “University of Pittsburgh has been one of the leading academic nursing programs for many years. Second reason (is the) strong cadre of interdisciplinary persons involved in sleep. Between UPMC and the VA, there are numerous opportunities for collaboration. The third reason is Pittsburgh. I like Pittsburgh. It fits my personality very well. It has all of the culture and all of the resources with a very livable environment.”

Chasens, who lives in Squirrel Hill, also is working with the American Academy of Nursing on policies related to shift work and nursing. “We need to recognize we have a limit on the number of hours we have the ability to maintain vigilance for our health and to prevent any errors,” she says. “We need to look at ways to provide that care in a safe way by looking at shift work and sleep.”

Celebrate Nursing and applaud the winners on Dec. 5 at the 2018 Excellence in Nursing Awards reception. Get tickets here.

Ann Mitchell
Professor of Nursing and Psychiatry, University of Pittsburgh

This article appears in the December 2018 issue of Pittsburgh Magazine.
Categories: From the Magazine, Hot Reads, Medicine and Health Features