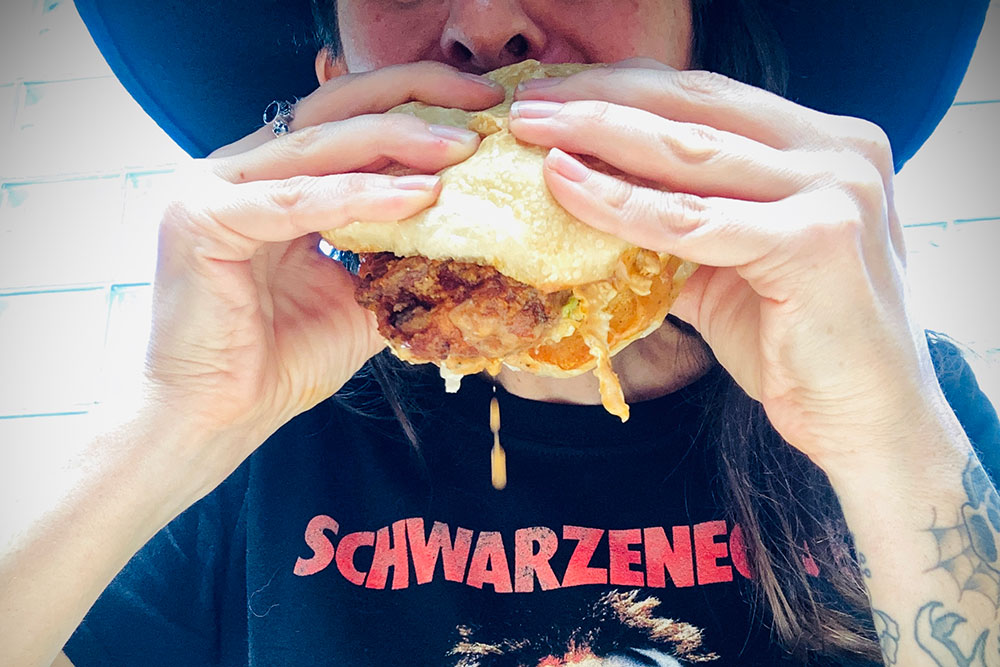 In 2002, singer-songwriter Warren Zevon appeared on “The Late Show with David Letterman.”

Diagnosed with terminal cancer shortly before the interview, Zevon told Letterman that, in his estimation, the secret to life was to “enjoy every sandwich.”

I think about him each time I sit down with a hand-held hunk of heaven.

We’re lucky to live in a town that’s a sub hub. From Uncle Sam’s and Peppi’s to Triangle Bar and Primanti Bros., Pittsburghers are never far from a good sandwich. In addition to those time-honored institutions, there are plenty of newer spots, hidden gems and food trucks throughout the city and suburbs that make masterpieces between two slices of bread.

Here are 9 sandwiches I recently enjoyed (OK — devoured, like a werewolf of London) in honor of Mr. Zevon: three in the city, three in the suburbs and three from food trucks. 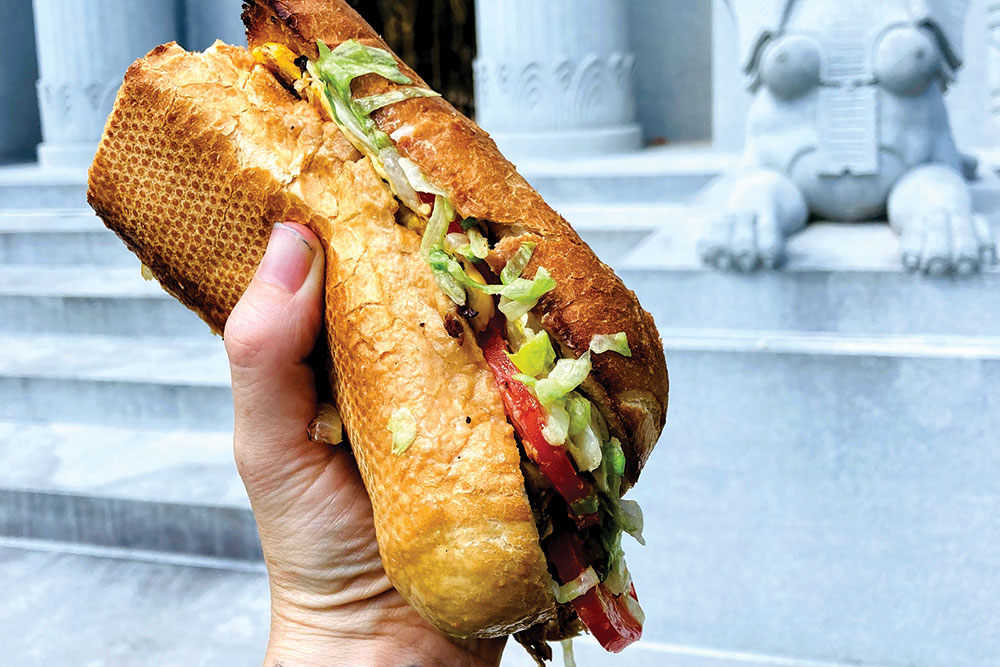 The bros behind this pint-sized pizzeria in Garfield make one hell of a hoagie.

Upon a friend’s recommendation, I decided to forgo my usual buffalo chicken sandwich and hail the Seitan (pronounced SAY-tan) Pittsburgh “Steak.”

Spak only accepts online orders and is strictly a to-go establishment. Once you receive a text that your meal is ready, pick it up at the door. There’s a small seating area next to the shop, where Taquitos Mexican food truck regularly parks, or you can walk down the block to Two Frays Brewery and pair your Spak with suds.

I dined at nearby Allegheny Cemetery, my favorite place in Pittsburgh. The Winter Mausoleum, an Egyptian-themed tomb complete with a pair of sphinxes, has long been a popular picnic spot within the 350-acre arboretum.

Before taking a bite of Seitan Pittsburgh “Steak,” I suggest you stock up on napkins, moist towelettes or mummy bandages — and bring a trash bag for easy clean-up. While this sub is to die for, it sure is messy.

Given to Fly at Federal Galley
Truffalo Chicken Sandwich 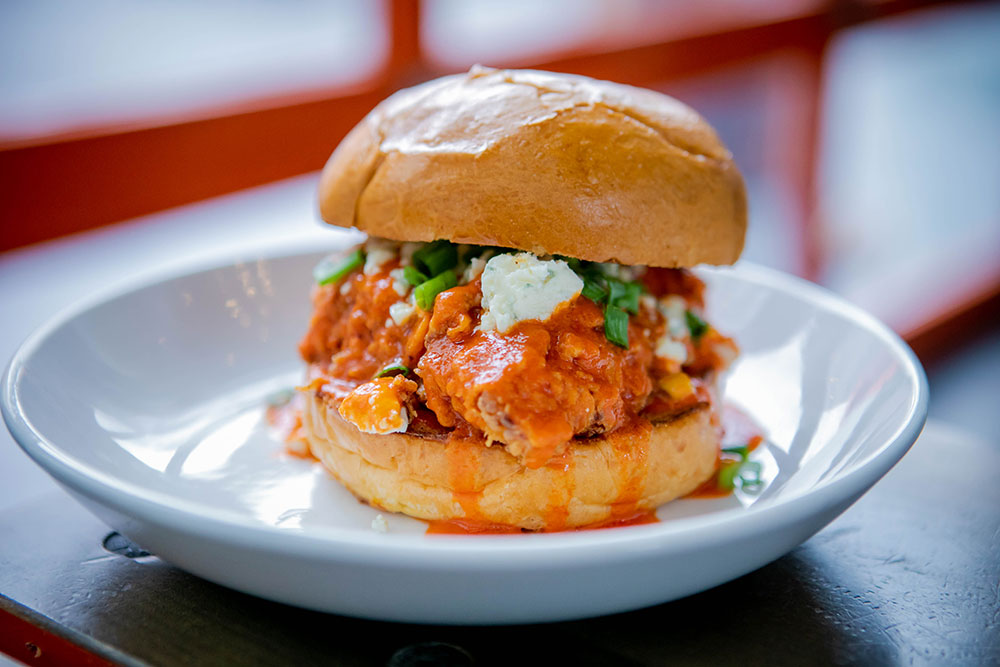 I fully support the fried-chicken-sandwich-as-big-as-your-head trend, as long as it’s done right. Given to Fly, one of the latest concepts to hatch at Federal Galley, does it right.

If you’re unfamiliar with Galley Group, the company operates two local restaurant incubators — one in Nova Place on the North Side and one in Bakery Square in Larimer. Within each facility, four aspiring restaurateurs are given a short-term platform to test ideas and recipes in a market-style space.

At Federal, chefs Troy Beck and Katie Peric specialize in birds on a bun. I ordered the Truffalo, made with truffle-infused buffalo sauce, blue cheese crumbles and green onion. While waiting for my food, I bellied up to the communal bar and sipped a Galley Haze, one of several house beers made in collaboration with East End Brewing Co.

When my sandwich arrived, I had to grab silverware and extra napkins. The chicken plank jutted from both sides of the brioche bun, so I had to cut the ends off and eat them with a fork. It’s actually not a bad way to consume this sandwich, since it comes slathered in orange, skin-staining sauce that’s spicy but not palate-numbing.

I ditched the utensil halfway through the meal and ate the rest of the sandwich the old-fashioned way. By the time my plate was empty, I looked like a happy Oompa Loompa in need of a nap. I would’ve belted out a moralizing ditty about the dangers of gluttony, but I was too full. 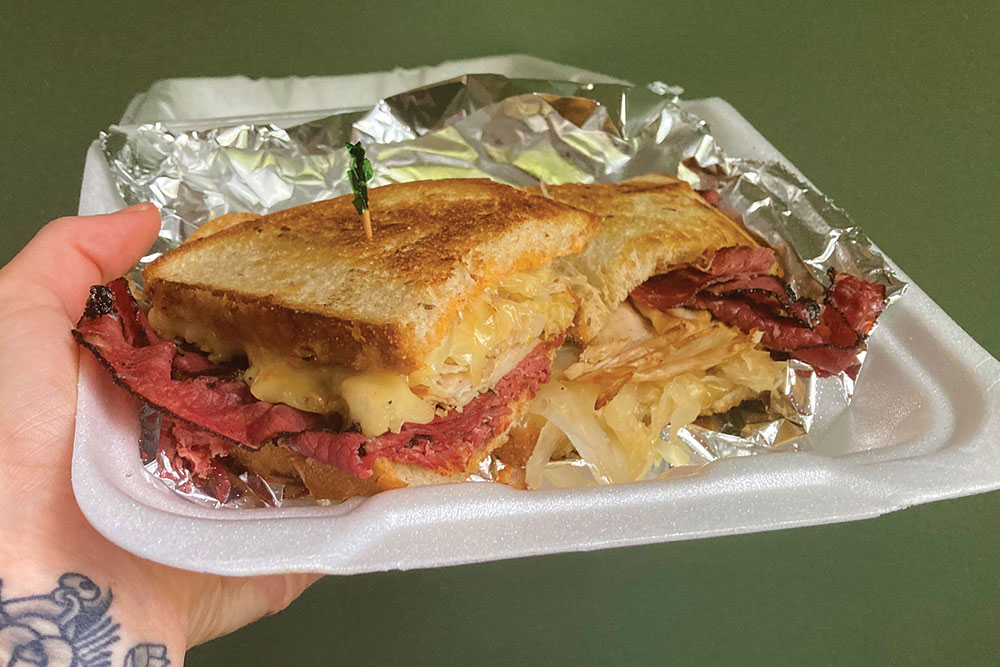 Reubens are my favorite type of sandwich. Food For Thought’s menu is memorable because they have numerous variations on this meat-heavy masterpiece.

First there’s the grilled Reuben, which comes with your choice of corned beef, turkey or pastrami topped with sauerkraut, Swiss cheese and Russian dressing. Replace the ’kraut with coleslaw and you’ve got yourself a grilled Rachel. Substitute grilled kielbasa for cold cuts and — Double Yoi! — it’s a Pittsburgh Reuben. Order the Reuben sliders for bite-sized sandwich samples of corned beef, turkey, pastrami and kielbasa.

My Ultimate Reuben featured layers of corned beef, turkey and pastrami with sauerkraut, Swiss and Russian dressing, with a pickle and a bag of Utz potato chips included.

Even if you have impeccable manners, Reubens are often difficult to consume without making a mess. Before eating lunch at my desk, I closed the door to my office so nobody would walk by and see it raining sauce and sauerkraut.

Surprisingly, this sandwich was a rather tidy affair. The rye bread wasn’t soggy, so it could support the weight of all the good stuff in between, which had melted together perfectly on the grill. 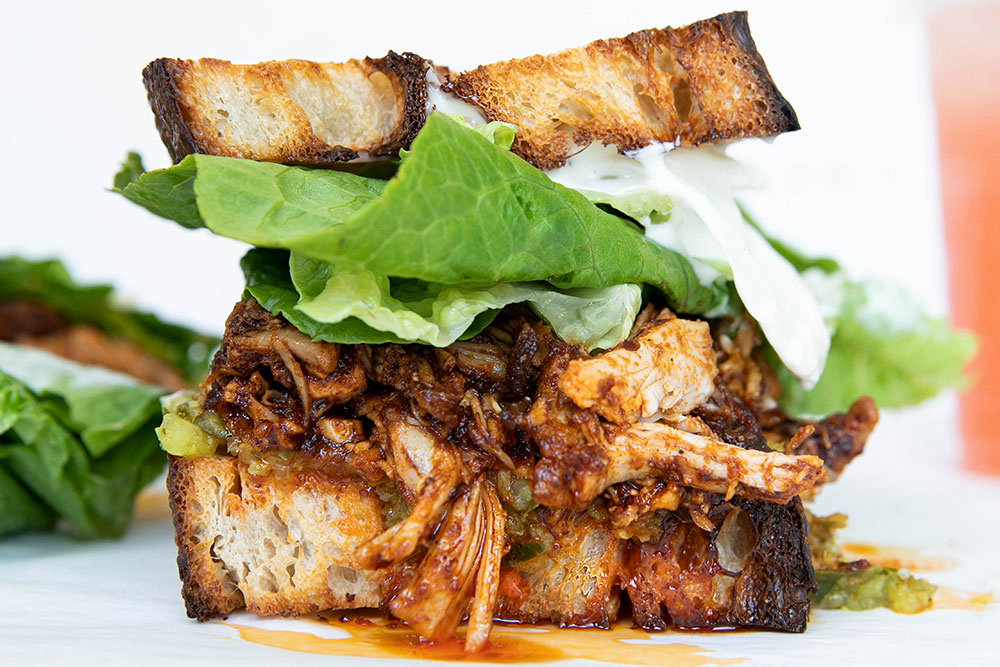 Located on North Avenue, the business is named after their Duncan Street abode where the couple hosts gourmet dinners. Although sandwiches are considered casual fare, these offerings have epicurean elements.

The Nashville hot turkey doesn’t contain uniformly sliced cold cuts, but crispy turkey-leg confit. The poultry is slathered in hot sauce, roasted garlic aioli, sweet relish, Romaine lettuce and onions on airy sourdough bread made in-house along with everything else on the menu. If you’re on a gluten-free diet, all sandwiches are available over greens.

I ordered a half and still struggled to finish my lunch. Although my belly was full, my taste buds didn’t want the flavor party to stop. The spiciness was tempered by the aioli, which was dripping all over my desk. In hindsight, I should have spent my lunch hour on Duncan Street’s back patio. Wherever you eat, you might want to don a bib and put a drop cloth down before diving in.

While some people prefer a cut-and-dry sammie, I believe a big, sloppy sandwich is a work of art, especially since my shirt looked like a Jackson Pollock painting by the time I gobbled up the last bits of my meal … with a spoon. 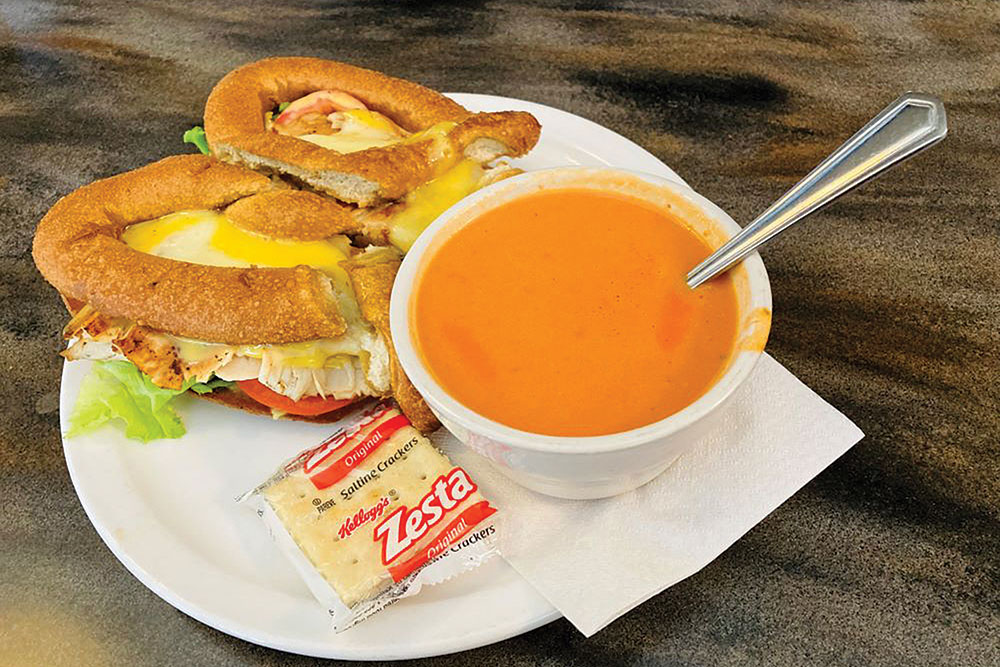 Stoke’s Grill is a rarity amid the chain restaurants along McKnight Road in the North Hills: a family-owned eatery focused on scratch-made ingredients with a killer beer selection. Their pretzel sandwich is out of the ordinary, too.

While some restaurants offer pretzel buns to change up their sandwich game, Stoke’s has three menu items served on fresh-baked twists.

The Hitch features turkey breast roasted in-house, Swiss cheese, lettuce, tomato and honey mustard. The bread is chewy and dense (more like an unsalted Auntie Anne’s pretzel than the traditional salty snack you’d buy at the ballpark). And because it doesn’t completely encapsulate the ingredients, the pretzel doesn’t dominate your taste buds. Like the other sandwiches in this round-up, it’s a multiple-napkin kind of meal.

While seated at the bar, I paired my entree with a local brew and a cup of homemade spicy tomato soup, instead of opting for home-cooked chips, fries or coleslaw. Stoke’s has a delicious array of hoagies, pressed sandwiches, grilled specialties, wraps and burgers, but the Hitch is a nice break from the norm. 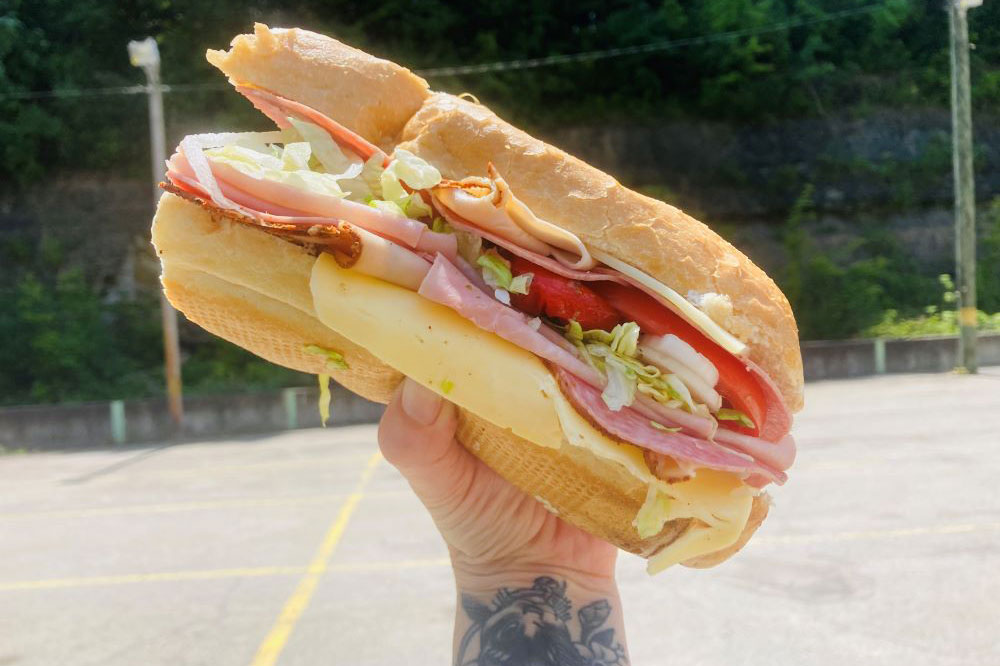 As a longtime North Hills resident, I don’t spend a lot of time in the South Hills. I would, however, regularly cross a bridge and drive through a tunnel for a grab-and-go sub from Family Deli in Bethel Park.

This spot came to my attention through a friend’s Instagram post where she raved about the weekly sandwich specials and their punny names. Summer vacation was the theme during my July visit, so I ordered Beachin’ It, a footlong hoagie loaded with Cajun turkey, hard salami, baked ham, Muenster and Provolone cheese, shredded lettuce, tomatoes, red onions, chopped banana pepper rings, roasted red peppers, red wine vinegar and oregano with a side of coleslaw. My taste buds mailed postcards saying what a good time they were having.

Shore-ly you’ll have to schedule a few days off to finish one. 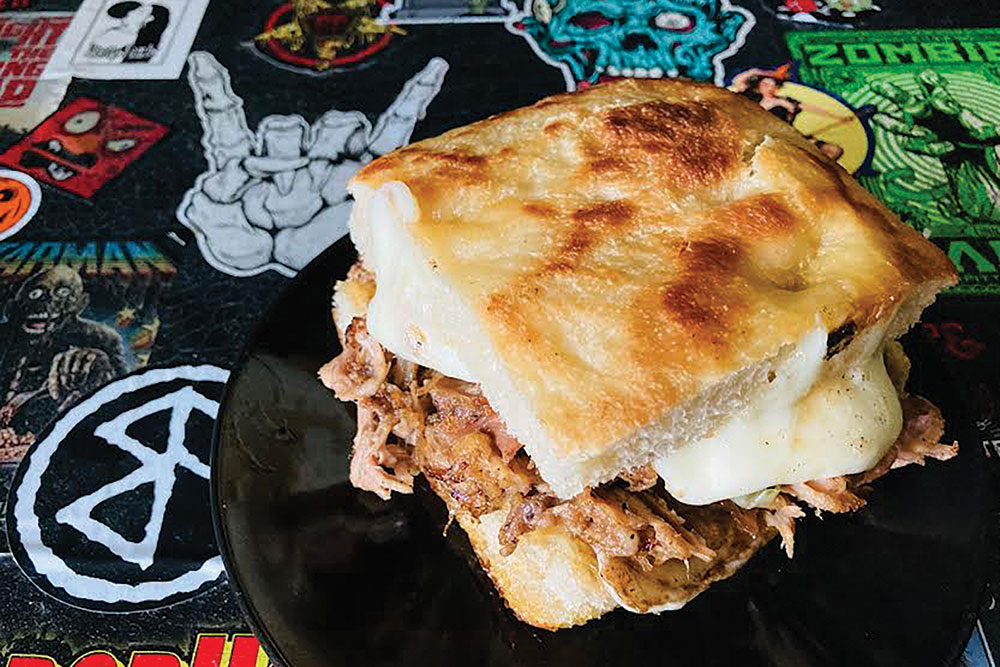 As a horror movie fan, I’m attracted to all-things creepy.

So, when I heard Blue Sparrow had a “monster” version of their Grilled Kim Cheese, I had to try it.

Owner and head chef Luke Cypher launched the global street eats truck in 2016. Like mad scientists in a rolling laboratory, the Blue Sparrow crew make everything from scratch, bake their own bread and regularly pickle and ferment veggies.

This sandwich is their latest gastronomic experiment, and it’s a beast.

As a base, they take the OG grilled cheese — focaccia, cheddar, mozzarella and kimchi — and add a dippy egg and pulled pork to the towering meal. When I received my to-go container, I was surprised by its heft. (Note to self: Stop lifting gigantic sandwiches and start lifting weights!)

By the time I got it home, the grease and drippings had soaked into the sponge-like focaccia slice on the bottom, locking in flavor in its most concentrated form. The pork was tender, the egg and cheeses merged into a puddle of ooey-gooey deliciousness and the kimchi provided a nice spicy-sour punch.

I ate half of it for dinner and the rest the next morning (it contains an egg and is, therefore, a breakfast food in my book). Even cold, the Grilled Kim Cheese Monster is so good it’s scary. 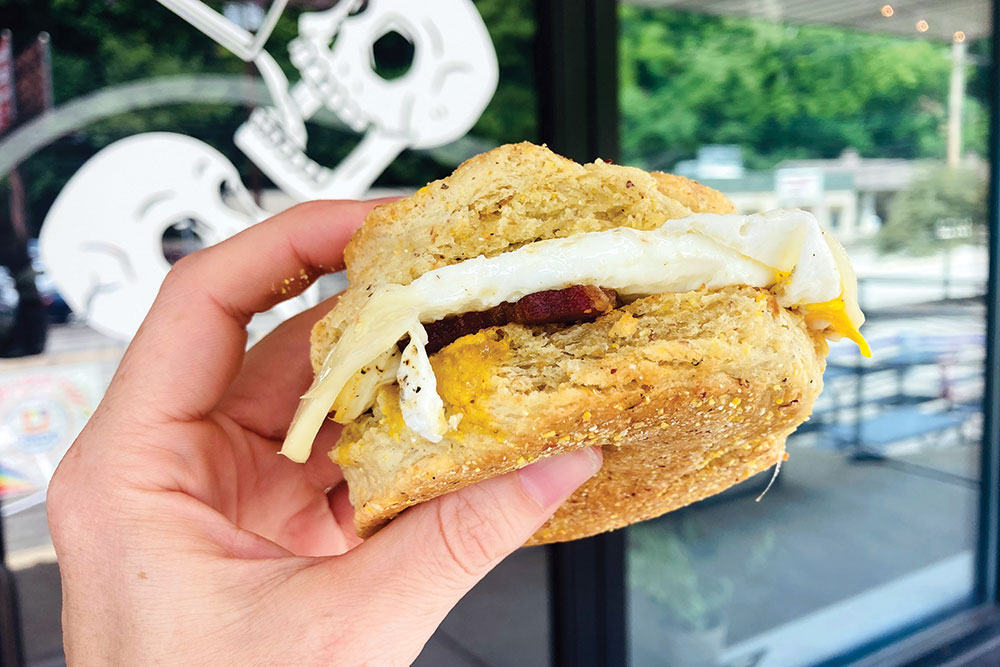 When Micah Maughan and Kit Durrett started Soul Biscuit in 2020, they hitched a custom-built, quarter-ton, stainless steel, mobile kitchen to the back of their tandem bike and dragged it to different breweries and events throughout the city.

As word spread and sales increased, so did the size of the equipment. To give their legs a break (at least during business hours), the cycling enthusiasts decided to park the two-seater and use a car to haul their buns around town every weekend.

Buttermilk biscuits, not wheels, are the circular soul of their operation.

I caught up with the guys on a Saturday morning outside of Necromancer Brewing Co. in Ross. I needed fast food to start my day and Soul Biscuit provides great alternatives to a McMuffin.

My bacon, egg & cheese biscuit was gone in a few satisfying bites, and I washed it down with a beer. 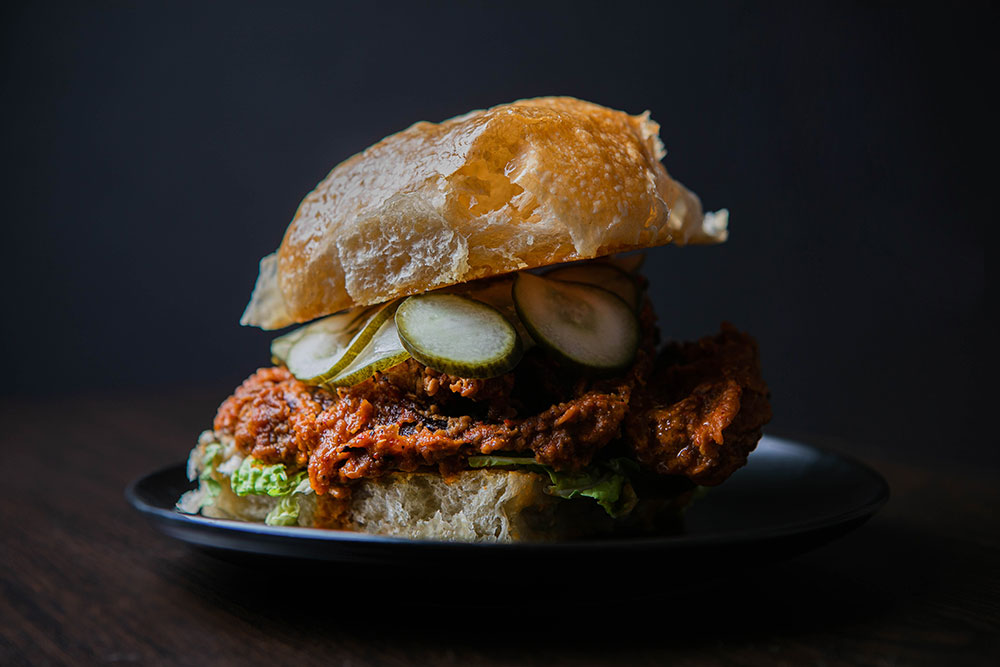 On July 30, 2022 — Arnold Schwarzenegger’s 75th birthday — I terminated my last sandwich for this story.

I said “Hasta la vista” to hunger by hitting up the Bridge City Brinery truck, which was parked outside of Hitchhiker Brewing in Sharpsburg.

Owners Mark Mammone and Joe Bardakos started selling their fancy pickles — fermented in a homemade brine of fresh dill, onion and garlic — during the pandemic. They were such a hit, the Piccolo Forno chefs bought a vehicle and expanded the menu to include “sammiches n’at.”

I sat down at Hitchhiker’s bar, ordered a Bane of Existence IPA and sent a thankyouverymuch skyward before chowing down.

Due to the delicious sauces, this is yet another messy, multiple-napkin meal, but while the bread is light and airy, it’s strong enough (like Arnold!) to hold everything together, so every bite packs a punch. By the time I left the building, I was all shook up … but I’ll be back.

Clarification: Allegheny Cemetery officials remind readers that mausoleums are not to be used as picnic spots; picnic tables are provided for such activities. A permit is required for all photography beyond personal use. While the public is welcome to visit the grounds, the cemetery is private property and has rules to ensure that the historical grounds, monuments and structures are respected.