The posts can be quirky or catty, kind or even hurtful — but they’re what neighbors are talking about. 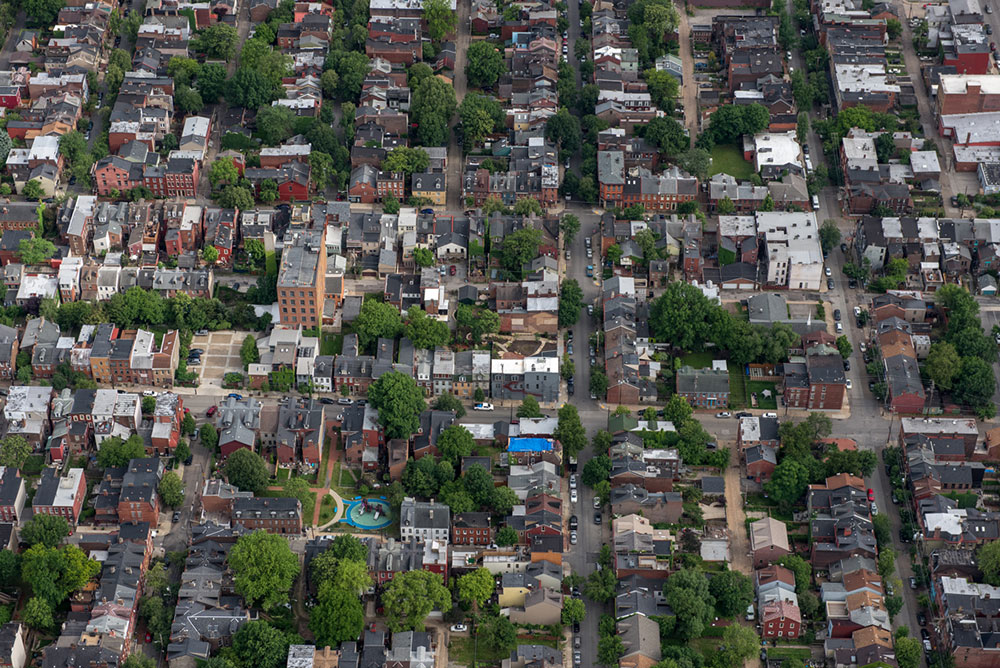 Betsy Lamitina’s day of spontaneous family sledding with an inflatable unicorn ended with a petty theft that became the talk of the virtual town on Nextdoor.

Her husband, Todd, got the pool toy as a gag gift. After a big January snowfall, he playfully suggested blowing up the unicorn, taking it to Allegheny Cemetery and riding it down an empty hill like a snow tube. The Lamitinas laughed with delight and made memories sledding with their son, Luke, 18. 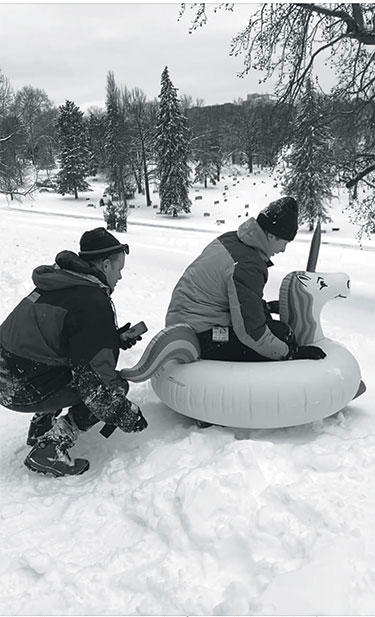 But later, when Todd stopped for hot cocoa at a grocery store near their Bloomfield house — parking the unicorn on a pole outside — someone stole it. Betsy turned to Nextdoor, a website and app that connects people with neighbors, and wrote a post about the thievery featuring pictures and a video of their fun day.

“People were really invested in this hunt for a unicorn in the East End,” says Betsy, 48, a teacher who kept her sense of humor during the caper. “Sadly, we never got the unicorn back, but … whoever has it, I hope they’re having a fantastic time and that the unicorn brings them joy.

“Oftentimes, people will post things on there that are just negative,” she says. “I feel like every once in a while, we just need to talk about a unicorn.”

From venting about missing unicorns and lawn decorations, to pleading for help finding a lost pet, to complaining about parking and dog poop, to reporting packages stolen from porches, to recommending a good contractor — more and more people are turning to Nextdoor, a private social network, to seek help or support or just to find out what’s happening in their neighborhoods.

About 1 in 3 households in the United States is on Nextdoor, which serves as a hyper-local version of social media services such as Facebook, says Maryam Banikarim, head of marketing for Nextdoor. Founded in 2008 and headquartered in San Francisco, Nextdoor operates in the U.S. and 10 other countries.

As people have lost other local news sources — more than 2,100 newspapers across the country have closed since 2004, while others have made drastic cuts in staff — such social networking sites have become an important resource.

In southwestern Pennsylvania, including Allegheny and surrounding counties, Nextdoor has 1,701 neighborhoods and 411,269 neighbors registered (at press time), she says.

People also use Nextdoor like they use Yelp, where people make recommendations about businesses, and Freecycle, where people offer and receive unneeded possessions.

The key difference between Nextdoor and other networking sites, Banikarim says, is the proximity of users to each other. And while interactions on social media often don’t go beyond cyberspace, Nextdoor communication often does connect people in person. Case in point: One Nextdoor user in Texas hosted a potluck for strangers, and 90 people showed up.

“So many people are just looking for someone else to connect with nearby,” she says. “The goal of Nextdoor is to leverage the technology to enable humanity. We’re not the end destination; we’re just the enabler.”

The founders of Nextdoor felt it was strange that so few people knew their neighbors personally, Banikarim says. A 2010 Pew Research Center study confirmed this: 28% of Americans didn’t know a single one of their neighbors by name.

The connection among neighbors that Nextdoor fosters has helped many people with pet issues. Chloe, a Swissvale resident who did not want to give her last name, posted on Nextdoor last summer that two unsupervised neighborhood dogs became aggressive with her dog, Oreo. She took Oreo, who she said got bitten on the head, to an emergency veterinary clinic.

Shaken up, Chloe posted about it on Nextdoor, where many people commented suggesting she call animal control or the police. But Chloe decided she didn’t want to get the dogs’ owners in trouble; she just wanted the dogs to be safely restrained.

Through the Nextdoor thread, Chloe teamed up with another neighbor to buy a new gate for the dogs’ owner — a satisfactory solution for all parties. Yet Chloe recommends talking to the problem neighbor instead of just venting on Nextdoor — something people tend to do about frivolous things sometimes.

“Some people on Halloween are angry about kids getting things other than candy,” says Chloe. “Most of my experiences on Nextdoor is with people being bananas.”

People often use Nextdoor to promote kindness, and they receive it in return. Kris Kolesin, 66, posted during the winter to offer to pick up any pets that were out in the cold. The animal lover got many replies, including one request to take a dog the owner no longer wanted. Kolesin ended up taking in one dog for a few days.

“My only goal was to help any person or animal that was unable to help themselves,” says the Economy resident. “I offered to help them without question and bring them back when the owner was ready. My only goal was not to judge but to offer a solution.”

Another time, Kolesin asked for help on behalf of a friend’s sick dog. Within an hour, she received six dozen messages offering to take the dog to a vet — something Kolesin was not able to do because she was recovering from an injury. Kolesin also asked neighbors on Nextdoor to drive past her house to wish her 87-year-old mother a happy birthday, when going out was too risky due to Covid. Many people honked.

“Nextdoor is a lifeline to receive or offer help,” she says. “It is honestly your neighborhood coming together.”

There also can be a controversial side to the site. After the murder of George Floyd in the summer of 2020, Nextdoor fielded complaints across the country that moderators were removing posts about Black Lives Matter and racial injustice. Before this, people of color had long accused Nextdoor of allowing racial profiling and racist comments on the site.

In an interview with NPR in July 2020, Nextdoor CEO Sarah Friar said it “was really our fault” that moderators on forums across the country were deleting BLM posts, claiming they were following outdated guidelines. The site took steps to update the guidelines and instituted unconscious bias training for moderators. It also has tried to recruit more Black moderators.

“We’re really working hard to make sure racist statements don’t end up in the main news feed, making sure that users that don’t [follow] the guidelines aren’t on the platform anymore,” Friar told NPR. “It is our number-one priority at the company to make sure Nextdoor is not a platform where racism survives.”

How does one become involved with Nextdoor? The first person to sign up with Nextdoor in a neighborhood becomes the founding member and can create a neighborhood “pilot.” Once enough neighbors sign up, the virtual neighborhood will officially be launched. Nextdoor restricts communication to only those who live in the area; only users who are able to verify their identity and home addresses can sign up.

Patrick Moore, 47, served as a moderator for six to eight months in his Neville Island Nextdoor group after a group leader saw his input on a post and reached out to invite Moore to be a moderator. Sometimes moderators would remove nasty posts, such as those that sparked political arguments; sometimes, posts would be debated by users for up to about 10 days before removal.

Indeed, people can be petty on Nextdoor, says Moore, who would read some posts and think, “Really? People are complaining about this?” He would get annoyed with people who were, say, griping about dog poop — if you have the time to take a picture and vent, why not just pick up the waste?

He sometimes would jump in on a post to defend someone getting shamed, like for advertising their businesses. He would say things like, “It would be nice to teach people how to advertise instead of being condescending.” Moore, a handyman, has gotten a lot of business through word of mouth on Nextdoor.

Nancy Mramor, a psychologist based in McCandless, says she often recommends professionals to people seeking referrals on Nextdoor. Mramor, a media expert, likens Nextdoor to a “neighborhood Facebook group” with a grassroots element that brings people together.

A drawback of Nextdoor, she says, is that it’s another form of computer communication and it doesn’t take the place of real, in-person interaction. Another drawback: People can be rude and combative on Nextdoor. The pandemic may be aggravating negative behavior, she says.

“I really do believe that during COVID … some people are just isolated and lonely, and they’re experiencing anger and frustration, and they’re [expressing] it inappropriately,” Mramor says.

Mramor has noticed that on Nextdoor, and other social media sites, people tend to comment in reviews about how they are treated before they talk about the product or service.

“They talk about how you make them feel,” she says. “I think that’s a commentary on our society — that people are looking for kindness and consideration, and sometimes they just get derailed. … What people remember is how they’re treated.” 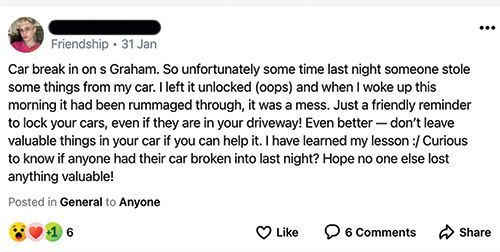 Many Nextdoor users say that the quirky, odd and sometimes ludicrous posts are entertaining to read — and sometimes, to write. Natalie Coccia, 37, of Avalon, grew weary of seeing dumped food in a wooded area of Avalon Park while walking her dogs. She turned to Nextdoor in hopes of reaching the culprit making the unsightly piles of pumpkins, chicken bones, cookies, vegetable scraps and coffee grounds with filters.

Coccia, who never found the food-dumping culprit, loves how she can get rid of household items just by placing them on her sidewalk and posting about them. She has also gotten free plant starters through Nextdoor posts. However, people sure can be catty in this online community, Coccia says.

“That’s the most fun about it — reading everyone’s comments,” she says.

Maryam Banikarim, head of marketing for Nextdoor, calls Nextdoor etiquette straightforward and a matter of common courtesy: Be respectful, do not discriminate and use your real identity.

Remember, the people on Nextdoor are real human beings that live near you.

“We’re a community platform, not a freedom-of-speech platform,” Banikarim says. “I consider Nextdoor like a dinner party … There can be heated discussion, but if you empty a bottle of wine on the person next to you, you’ll probably be asked to leave.”

Nextdoor has added virtual guardrails to try to pre-empt strife: In 2019, Nextdoor added a “kindness reminder” that detects potentially offensive comments and warns the poster to think twice.

It also has a strict policy against racist behavior, discrimination and hate speech. It has an anti-racism notification.

Those violating the policies face having their posts removed or losing their access to Nextdoor. Thankfully, most people behave well, Banikarim says.

“I inherently believe people are good.”

This article appears in the April 2022 issue of Pittsburgh Magazine.
Categories: Community Feature, From the Magazine, Hot Reads