Some retail and restaurant workers around the region have faced cruel customers, while some local health care workers have gone on strike to call for better wages and working conditions. 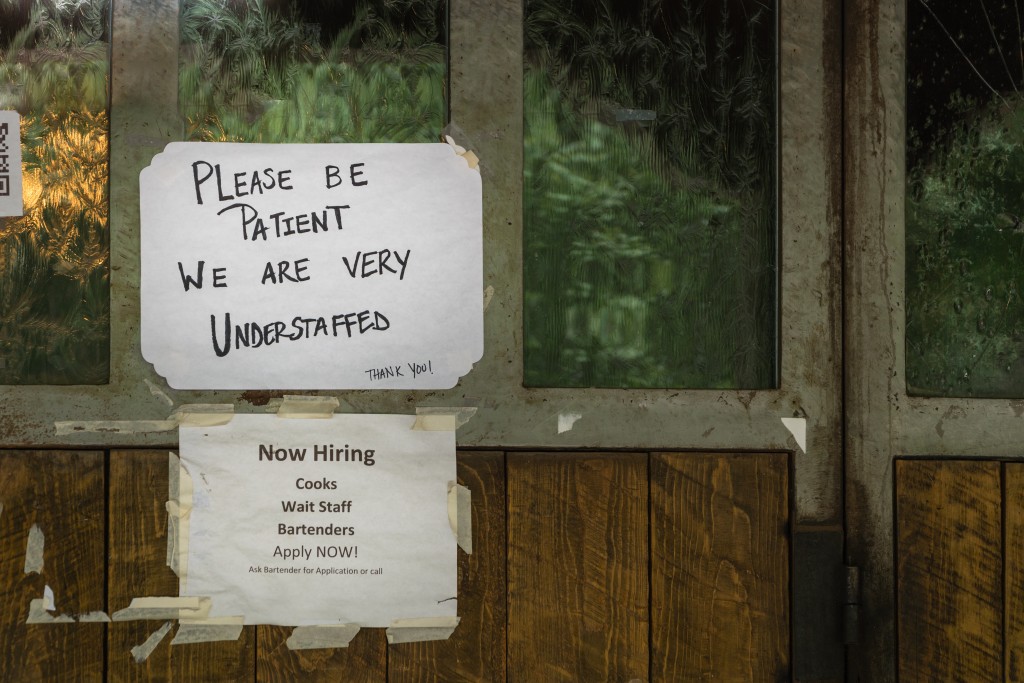 It seems every business we pass these days has one thing in common — a “help wanted” sign in the window.

Since more than 4 million workers left their jobs at record rates last summer across the country, talks have turned to an international labor shortage that, when compounded with supply chain issues, has had a lingering impact on the economy. Consumers may have noticed longer wait times for buses, purchase limits on some alcohols, limited menus at fast-food restaurants and delays on some construction projects, all of which can be attributed to a shortage that many fear will get worse before it gets better.

The cause for the labor shortage is complex. Some cite consistently low wages and poor working conditions; according to the National Low Income Housing Coalition, workers need to make $25 per hour to rent a modest two-bedroom apartment, and minimum wage workers can’t afford rent anywhere in the country.

Similarly, frontline workers in health care, retail and the restaurant industry are at an increased risk of being exposed to COVID-19, even as vaccination rates climb, and some think workers have decided en masse that their health is worth more than the meager wages they take in and the mistreatment they face from management and consumers alike.

An Oct. 25 article in Time Magazine reported that customers have indeed been meaner lately, and sometimes even violent. On Oct. 21, a woman pulled a gun on servers at a Philadelphia Chipotle when she was asked to place her order online. Earlier in the month, a mother in Connecticut was investigated for allegedly slapping a school bus driver, and a Cape Cod, Massachusetts restaurant closed for a day over the summer to give its employees a break from customers who were “swearing at us, threatening to sue, arguing and yelling at my staff, making team members cry,” according to a July 8 Facebook post.

Around Pittsburgh, multiple businesses and employees have expressed similar sentiments.

A Moon GetGo convenience store closed temporarily on Nov. 16, posting a handwritten sign on the door that read, “Closed because the people of Moon Township treat our employees horribly!!! And ran off the staff.” Although GetGo later apologized and said the incident was between one employee and one customer, many still feel that it’s indicative of a larger trend.

In a CivicScience poll from the end of October, 33% of Pittsburgh adults said they felt that customers’ poor treatment of service workers played a “major factor” in the labor shortages. Another 28% said it was a moderate factor; 17% said it was a minor factor; 18% thought it was not a factor at all; and 4% had no opinion.

Thirty-four percent of Pittsburgh adults also said they strongly support increased wages for restaurant workers, even if it means an increased cost for consumers. An additional 18% somewhat supported it, 13% somewhat opposed it, 23% strongly opposed it and the remaining 12% had no opinion.

In the same vein, Steel City residents are concerned that the labor shortage will have a substantial negative impact on the retail employees working this holiday season. In a CivicScience poll from Nov. 8-10, 45% of Pittsburgh adults reported that they were very concerned about this, with another 30% saying they were somewhat concerned and 21% reporting that they weren’t concerned at all. The remaining 4% had no opinion.

While the challenges retail workers face have been ample and varied throughout the pandemic, the labor difficulties within the health care sector have also been exacerbated by the virus. In another poll from September, 57% of respondents reported that they were “very concerned” about burnout among health care workers due to the coronavirus, while 23% said they were somewhat concerned, 17% said they were not concerned and 3% reported that they had no opinion on the matter.

This comes as talks of a strike circulate among mostly non-union UPMC workers. On Nov. 18, workers protested outside of UPMC Presbyterian Hospital, advocating for fairer wages, safer staffing and better working conditions.

The striking workers are calling for a $20-per-hour minimum pay, more affordable health care and the right to unionize, as well as the elimination of outstanding medical debt for all hospital workers.

In a series of ads released on social media, one striking worker said he had worked at UPMC for 22 years and still makes less than $18 an hour.

On the other hand, the Post-Gazette reported earlier this year that UPMC’s then-CEO Jeffrey Romoff took home just under $9.5 million in total compensation for the year ending June 30, 2020.

Half of Pittsburghers polled earlier this year said that they support raising the minimum wage to $15 or more, while 40% thought it should be less and 10% had no opinion.