Best of the Burgh: Wisdom in Sustainability

Day Owl bounced back from shutdown by once again reimagining itself. 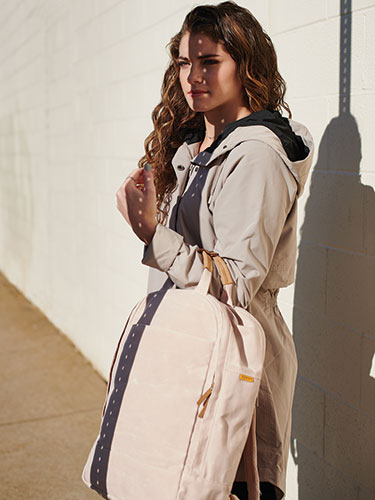 When the pandemic hit, Homewood-based Day Owl, best known for its sustainable backpacks, had to shut down operations and furlough three workers.

With funding from the Richard King Mellon Foundation, the Heinz Endowments, and the Henry L. Hillman Foundation, the company, by April, had hired those employees back and created new positions. Beyond backpacks, the company began producing medical-grade plastic face shields for healthcare workers.

To date, it has assembled more than 70,000 face shields, which fit comfortably over goggles and N95 masks, including for providers at Allegheny Health Network. The company also has begun selling face masks made from natural cotton canvas, organic cotton and hemp.

Day Owl is still shipping backpacks and — according to its website — doing it as quickly and safely as possible.

A relatively new company, Day Owl was formed in January as a division of Pittsburgh-based Thread International specifically to create a line of 100% made-from-recycled-material, canvas-like backpacks.

Founded in 2011, Thread creates fabrics from recycled materials retrieved from impoverished communities, including in Haiti and Honduras. The company now has two divisions: First Mile, which continues to work with communities overseas to recycle materials, produce fabric and sell it to other brands; and Day Owl, which takes the recycled materials and produces sustainable products, including its first consumer product: backpacks.

According to Ian Rosenberger, founder and CEO, the company’s new divisions were the result of a change in the retail market.

“Our clients, who have historically been large international or multinational organizations like Puma, Ralph Lauren, HP and American Eagle, began to see, in a much deeper way, that eliminating their negative impact isn’t just altruism,” says Rosenberger, “but that taking care of people and the planet is actually tied more closely to their operating expenses and profit.

“All of a sudden we were getting a lot more inbound calls for the work, but not as many in apparel and retail as we would like,” he says.

With the belief that Pittsburgh is “well-suited to be a hub of global consumer goods” Rosenberger and his team looked at products their recycled materials could possibly produce and the companies they would compete with — and Day Owl backpacks were born.

The backpacks, which come in two sizes and five different colors, feature a variety of inward pockets to keep laptops, water bottles and other smaller necessities organized. According to Thread, each bag produced saves 25 bottles from landfills or oceans.

“Starting with reimagining the backpack, we’ll make things that help anybody that’s trying to get out there and get something great done, [help them] feel ready to take on the world, all made out of the most responsible materials that exist,” says Rosenberger.