Best of the Burgh Readers’ Poll Winners in Services

We spotlight a dog trainer who teach pets — and their owners — how to be their best. 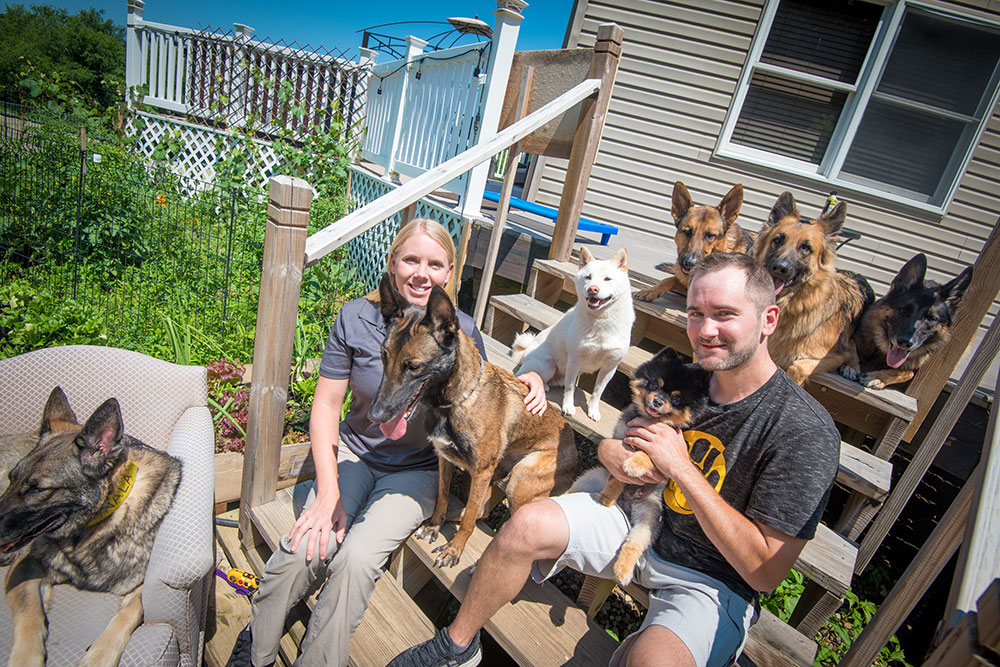 So many people adopted dogs while they were social distancing at home that a new phrase was born: pandemic puppy. That could keep Elissa Weimer-Sentner busy. She owns Paw and Order Dog Training, winner of Best Pet Service in Pittsburgh Magazine’s Best of the ’Burgh Reader’s Poll. And all those puppies and a backlog of other requests means she has a full schedule in the coming months.

Weimer-Sentner, who has seven dogs herself, founded Paw & Order, originally under a different name, in 2013. She is a certified Canine Good Citizen Evaluator and a member of the Association of Professional Dog Trainers. She served as a Combat Military Police Officer from 2007 to 2013. Her love of dogs and helping people combined with meeting with a trainer in Delaware set her on the path she is now and has introduced her to a host of clients, many of whom have become friends as well.

One client, Steve Sentner, went so far as to become a business partner — and her spouse. He handles the website (pawandorder.com), marketing and other non-training aspects of the business.

Paw and Order, which is based in Imperial, has expanded from being a family-owned business to having five employees, three independent contractors, and a soon-to-open franchise in New Castle.

Weimer-Sentner makes sure potential trainers have the skills they need to train dogs but says that being good with other people is equally important. “That takes a natural ability.”

Good training requires solid follow-through from clients who sometimes go off and do their own thing, Weimer-Sentner says. “You have to be to the point and blunt sometimes with clients,” she says.

Paw and Order offers a range of services, from basic, in-home puppy training for $475 to immersive boarding and training for $3,300 and up. “I do all the work and then I train the owners when the dog is done,” Weimer-Sentner says.

Paw and Order basically had to shut down during the stay-at-home order but did virtual consultations with some clients. “A lot of dogs regressed,” Weimer-Sentner says.

As things return to normal, Weimer-Sentner and her team are playing catch up, adding COVID-19 safety measures to the training. She is also the head trainer for the newly formed Kovid-19 Detection Task Force, a local organization that is seeking funding to train dogs to detect the presence of COVID-19. Trained dogs already can alert people to the presence of such diseases such as cancer and diabetes.

Sentner says one of the things clients love about Paw and Order is that when the training is over, the interaction continues. The company holds free “pack walks” throughout the year where former clients and their dogs can interact in public, on trails, kayaking or at dog-friendly establishments.

“We have a very loyal fan base,” Sentner says.

So what behavior bothers Weimer-Sentner the most?

“I hate when people let their dogs rush up to other dogs or people. They are ignorant of how dangerous it can be,” she says. “I hate seeing untrained dogs when I know I can fix it.”