Best of the Burgh Readers’ Poll Winners in Entertainment & Leisure

We spotlight the cultural beacon in the heart of Schenley Park that is always changing — and always spectacular. 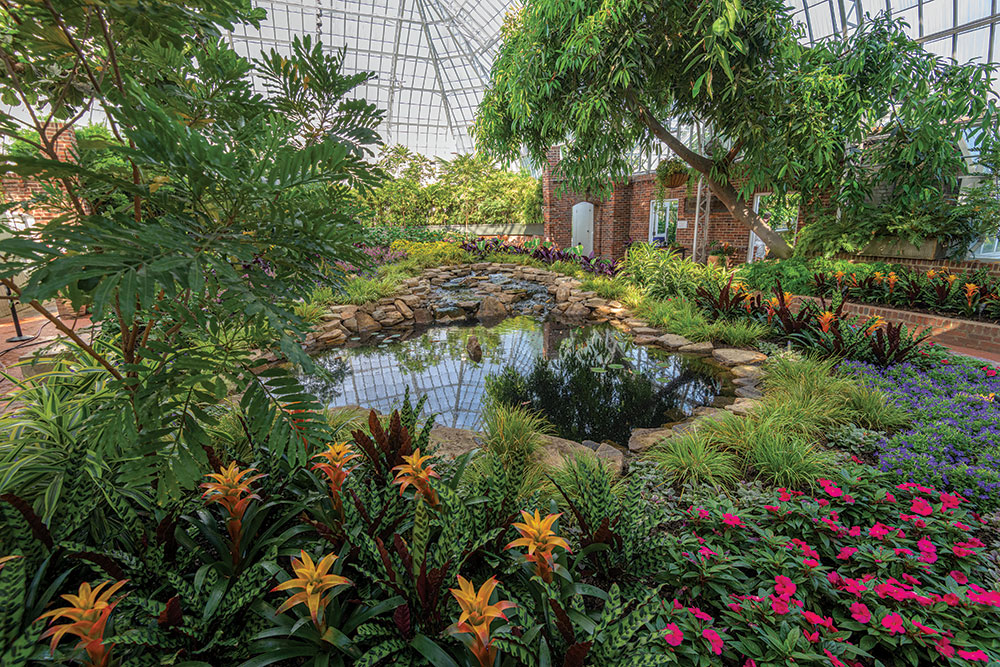 In its 127-year history, Phipps Conservatory and Botanical Gardens has grown a lot. It has held glass flowers and a corpse flower, cacti and banana trees, and its Center for Sustainable Landscapes holds the elusive Living Building Challenge Certification.

There’s a koi pond in a Japanese courtyard, a room that explodes once a year with live butterflies and a new exhibit each season. In winter, it’s an oasis of green and warmth, with lights twinkling for the holiday season and performances from the Pittsburgh Ballet Theatre. In summer, it’s color and life and growth.

There are any number of reasons it could have been named Best Tourist Attraction in our 2020 Best of the ’Burgh Readers’ Poll.

Presented as a gift to the city of Pittsburgh in 1893 by philanthropist Henry W. Phipps, Phipps Conservatory was originally a nine-room glasshouse (it now counts 14 rooms and numerous outdoor gardens in addition to the Center for Sustainable Landscape, Phipps Garden Center in Shadyside and more). It cost $100,000 to design; its construction took just one year.

In 1930, the owner of the Armstrong Cork Co. donated $50,000 worth of rare orchids to the observatory; the orchid room still exists today. In the 1970s, Phipps’ flower shows began to become more elaborate under the direction of its lead horticulturist, 24-year-old Edward Vasilcik; his notable accomplishments included a show themed around Broadway musicals, complete with a castle for “Camelot”. In 2006, Phipps added its largest indoor display area, the 12,000-square-foot, 60-foot-high Tropical Forest Conservatory, which shifts its focus to a new region of the world every three years.

The conservatory is also home to a rare specimen of amorphophallus titanum, better known as the corpse flower. The flower, named Romero after director and beloved Pittsburgher George Romero, typically blooms once every three to seven years and can grow up to 8 feet tall. Its last bloom occurred in 2016, when patrons lined up in the middle of the night (when the stench is at its strongest) to catch a whiff.

Outside of simply spectacular displays, Phipps is behind the “Let’s Move Pittsburgh” initiative to promote health and wellness and in 2013 launched Homegrown, a program that has installed more than 225 raised-bed vegetable gardens in underserved communities.

And it has, like every cultural institution, been called upon to adapt further during the COVID-19 pandemic.

Since the shutdown in mid-March, Phipps has turned its fifth annual BioBlitz Family Fun Festival virtual, hosting scientists, naturalists and educators for families to learn about the region’s plants, birds, trees, fish, mammals and more, created virtual classes and hosted a “Make Your Own Troll” contest for kids to coincide with the summer flower show theme.

“The new restraints presented by COVID-19 have pushed our staff to be creative in the way we design and present programs, care for our plants and connect with the public,” Phipps President and CEO Richard Piacentini said. “The upside of this challenge is that these new ways of working have brought the Phipps experience to audiences who never had the opportunity to connect directly with us due to distance, timing and other factors. We have also adapted our programming so that we have been able to continue our more-than-125-year tradition of connecting visitors to the beauty of nature.”

In Bed By Ten
Dance Party