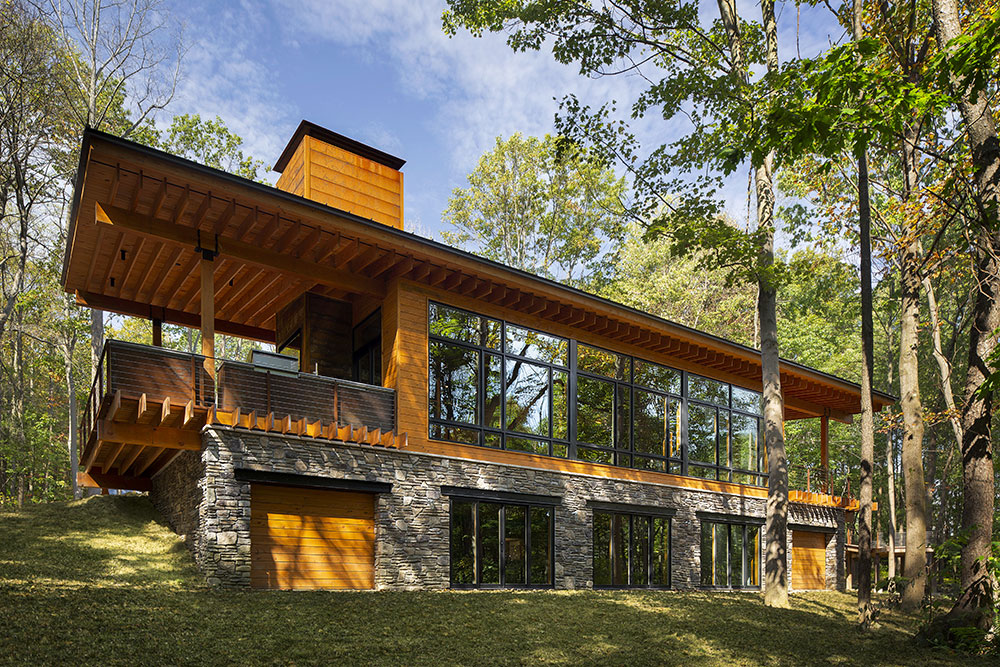 More than 12,000 years ago, mile-thick glaciers crawled south from Canada, carving rolling hills into the Pennsylvania landscape and depositing a medley of natural debris in their wake: boulders, gravel, sand and clay.

Evidence of that era stretches across Butler County, where thousand-pound slabs of stone stud the earth and a sprawling state park is named for the moraines those glaciers created.

So when architect Robert Gaskill began designing his family’s modern, sustainable home in the woods there, it made sense to use the surroundings as inspiration. 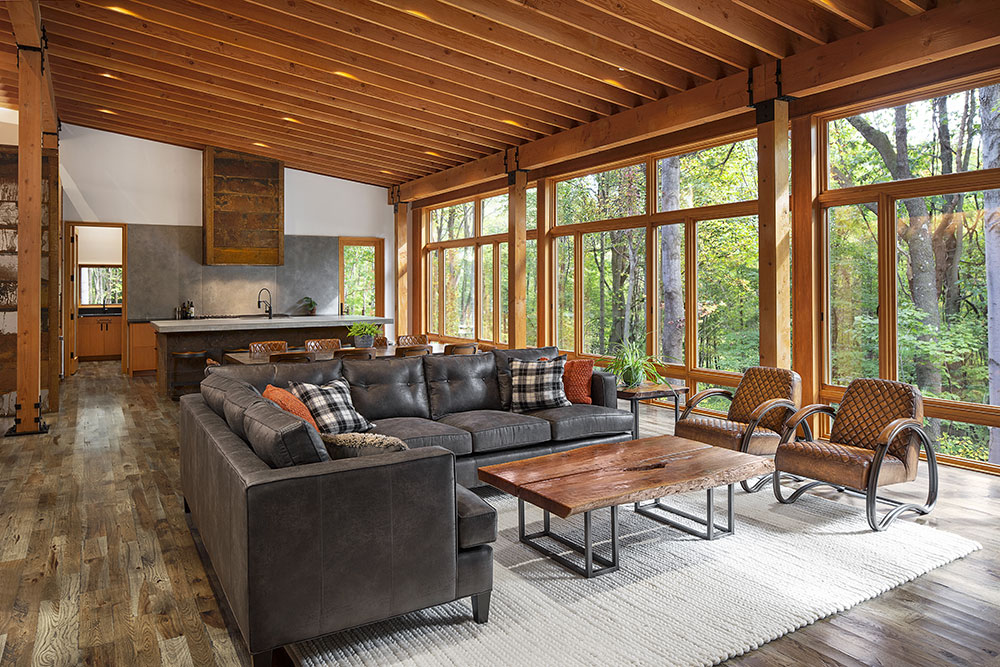 “I tried to really let nature influence the design,” Gaskill says. “I let the site speak to what the design wanted to be.”

The process wasn’t all about achieving optimum aesthetics, though the stone and wooden structure does fit seamlessly into its surroundings. It was also about working with the land, using the resources it provided and maintaining the existing topography.

According to the Best of Design judges, Gaskill accomplished that goal. They named his home the winner of two design categories: Best New Home and Best Green Home. 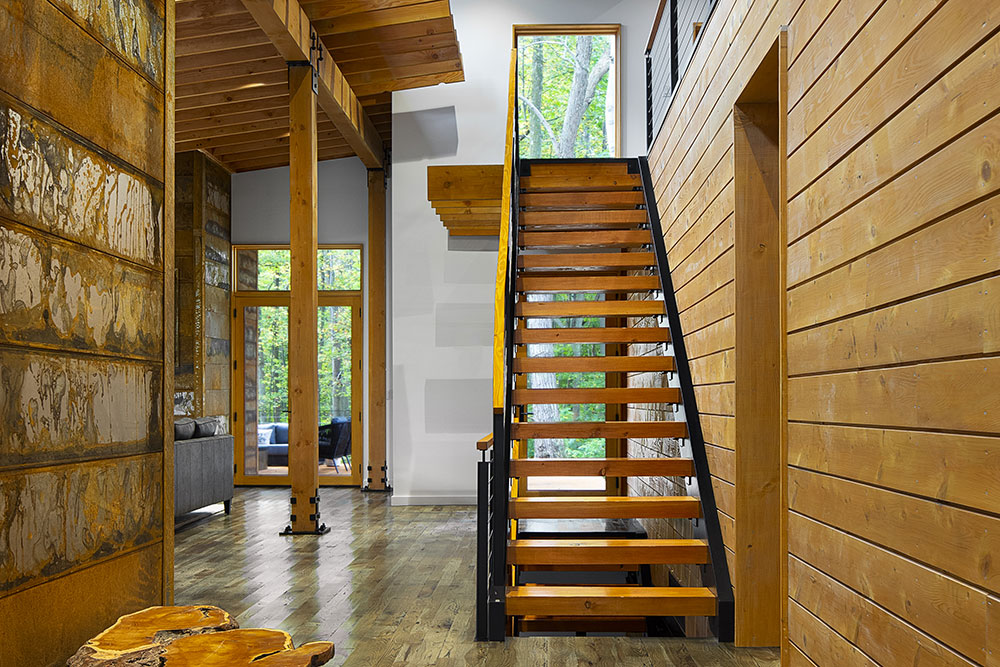 “This home was so successful in creating a space that not only responds to its natural habitat in design but also in function,” says Crystal DeCastro Knapik, a project designer with Vocon in Cleveland. “The use of reclaimed siding and beautiful integration of sustainable design strategies really placed this home above and beyond the competition.”

Sustainable design isn’t new to Gaskill. As the owner of boutique residential design firm Gaskill Architecture, he incorporates sustainable techniques and materials into nearly all of his designs. But because the client’s vision drives the end result, Gaskill has never had free rein to incorporate all of his preferred sustainable practices into a single design — until now. 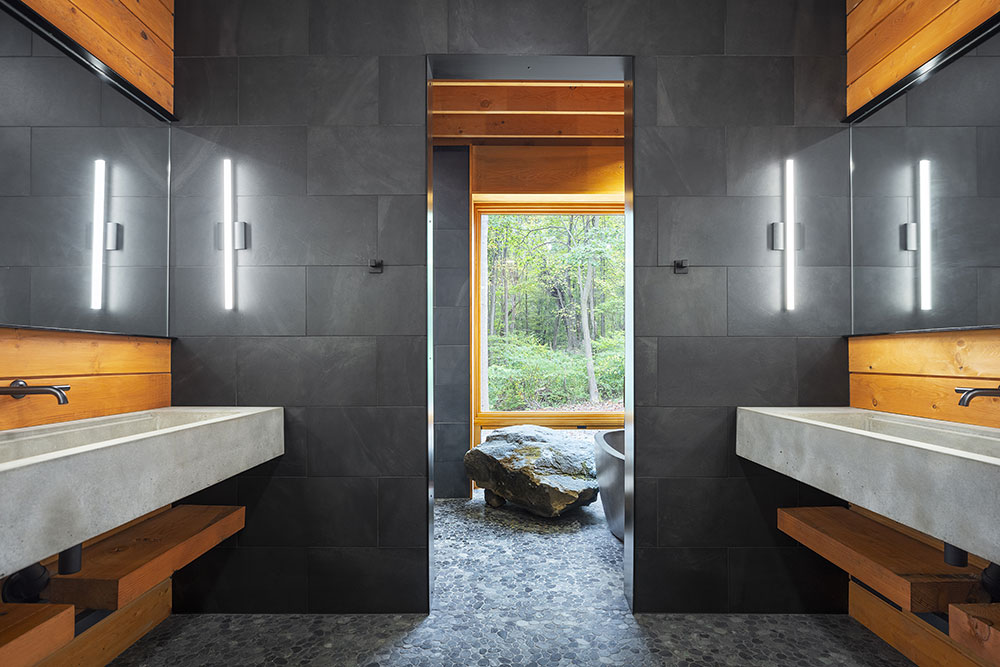 It took him a full two years to draw up the final blueprints for his family’s home. Integrating his own eco-friendly ideas and his family’s special requests — his daughters Ella, 13, and Avery, 11, had a lot to say — into a single, coherent composition was a challenge.

“For all of my clients, the design is for them and their families, how they live and how they want to live,” Gaskill says. “Designing for yourself is harder because you overthink every detail.”

Fortunately, finding the perfect piece of private, wooded property helped the process. Sara Gaskill, who works in commercial real estate appraisal, discovered the 11-acre gem. The owners had been looking to sell but were also mindful of finding the right buyer and followed the offer with something akin to a job interview.

“They didn’t want someone who would come in and flatten and annihilate 3 acres,” Gaskill says. 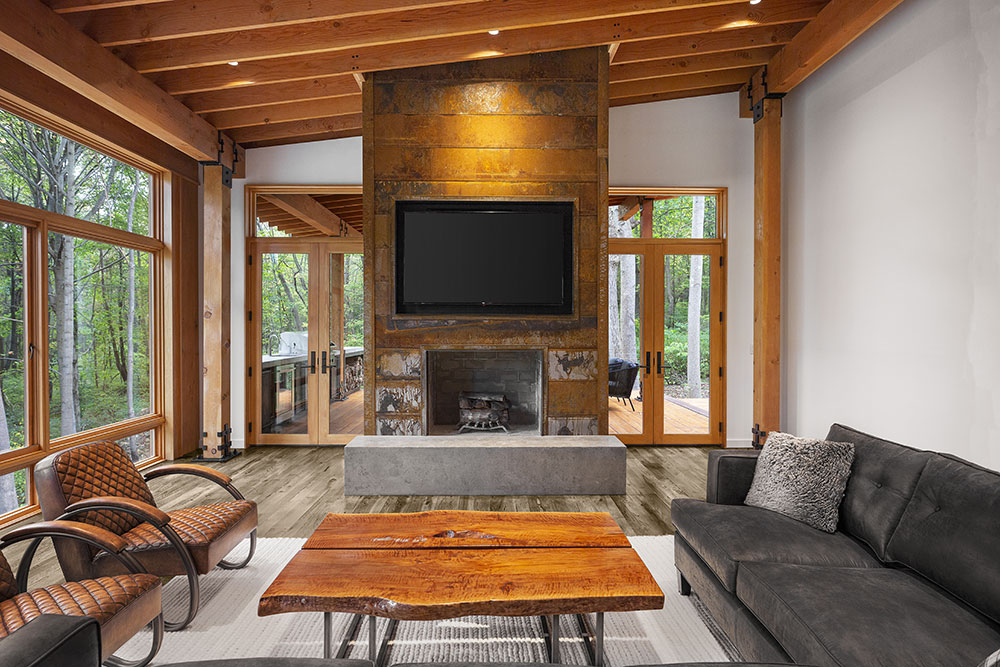 Once they heard about the family’s plans for a sustainable sanctuary, the deal was sealed.

The Gaskills broke ground in the spring of 2018 and moved in 15 months later. The 6,800 square-foot home sits on a natural grade about 700 feet into the woods, framed on all sides by a mass of tightly packed hemlocks. Deer, turkey and coyote regularly creep through the brush, but given the property’s isolation, few people are able to stop and admire it.

“It’s not a house that is trending at all,” he notes, a hint of pride in his voice. “There are a lot of huge houses you can buy for $2 million and have 8,000 square feet, but there’s no depth to the design. There’s no soul.”

This house has soul. 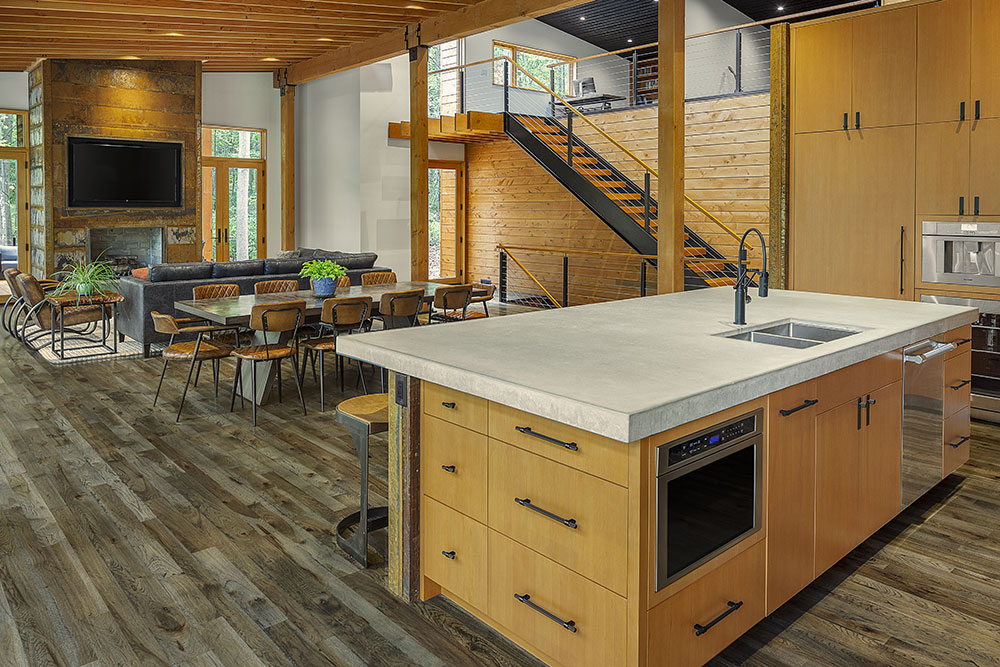 In a design influenced by the planet’s last glaciation, it is fitting that the first step visitors take toward the front door is onto a boulder.

That boulder and the one set directly behind it serve as natural steps to a 180-foot bridge that stretches from the driveway to the home’s front porch. Because of the way the land slopes, the bridge is a necessary component, but Gaskill’s appreciation of the landscape has also made it an intentional one.

To prove this, he stops at a bend in the bridge and aligns himself with the glass door before him. His finger points to a view that shoots straight through the house, between the treads of an open staircase and out the other side, where an old, gnarled tree climbs into the sky. 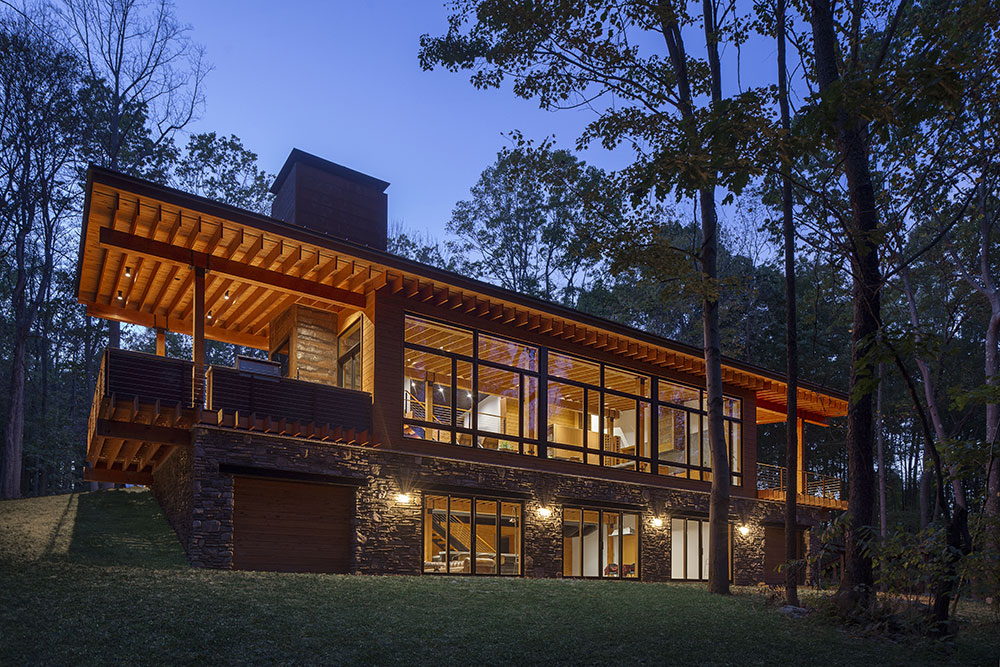 “I wanted vistas that focus on unusual, natural elements,” he says.

But he also wanted the house to fabricate its own unexpected elements. For example, in the middle of the house, where the home and garage rooflines meet, is a corten steel gutter that collects rainwater and spills it into a collection of rocks below. Those rocks are slowly directing the rainwater into a swale that runs under the bridge and — someday, the Gaskill girls hope — into a turtle pond.

Until then, the gutter has the added benefit of drumming a soothing song for the bedrooms below during a downpour.

It’s just one way Gaskill has managed to bring the outside in. Another is apparent just steps into the house, where a two-story hemlock wall runs the length of the great room and extends to porches on either side. Opposite the wall is a bank of floor-to-ceiling windows that serves as a prime spot to view sunrises and spy on the wildlife that wander the woods, an experience that makes the need for a vacation almost obsolete. 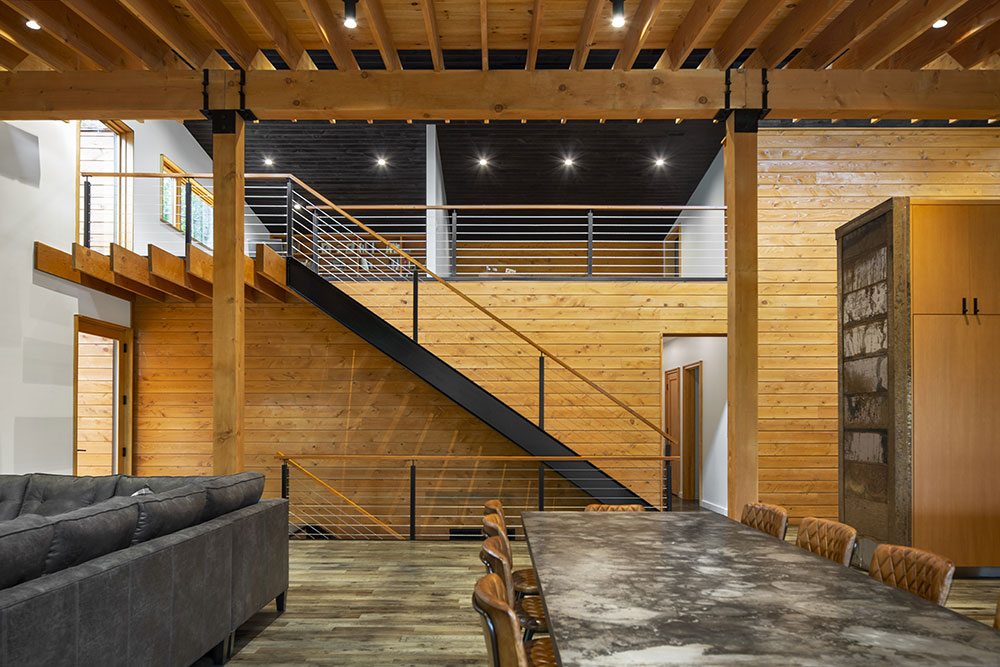 A peek down the adjoining hallway only serves to affirm Sara’s remark. The master suite includes a spa-like wet room complete with a concrete tub that holds heat for hours, a 1,500-pound boulder bench pulled right from the property and a giant picture window.

The window does have integrated blinds, but there’s hardly any reason to use them.

“Truthfully, I never close it,” Gaskill says. “Maybe a fox will see you.”

But the most coveted — and kid-approved — element of the house is hidden in Ella and Avery’s closets. Each one has a ladder that climbs up through a trap door into a secret room on the lofted second floor. They call it the “No Hype Room,” and for good reason.

The place is made for up-all-night sleepovers. Three walls are painted the color of midnight; the fourth is stark white and used to project movies, which the girls watch from their twin nests of blankets and pillows.

The only other way into the space is through the music room — everyone in the family plays at least one instrument — and only accomplished by pulling the spine of a faux book on a sliding bookcase. 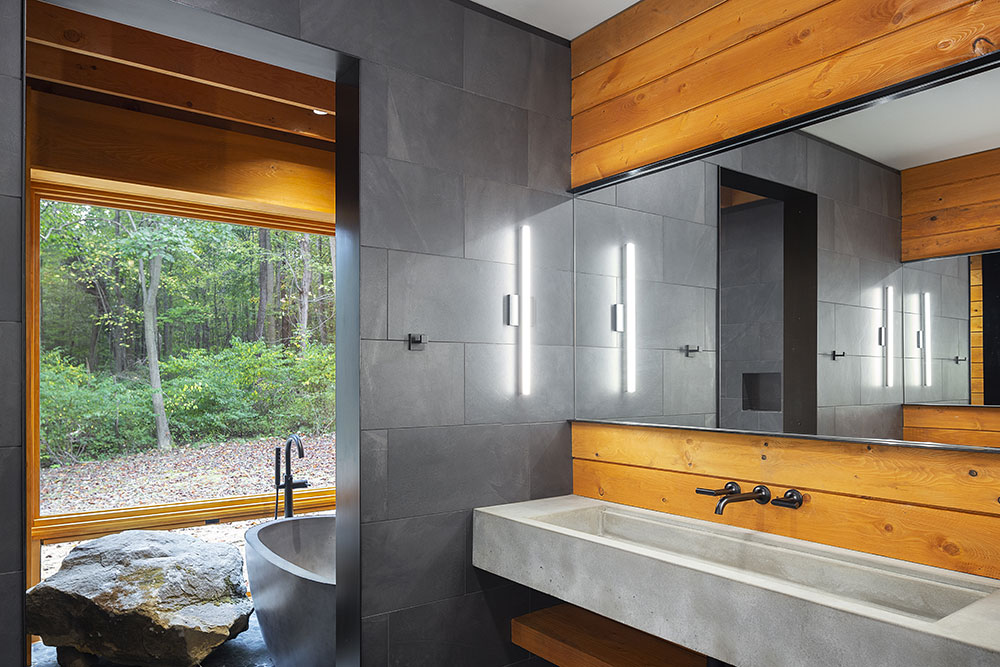 Despite all of the home’s elegant and innovative features, Gaskill’s favorite topic of conversation remains the home’s dedication to sustainability.

He easily ticks off a list of the home’s greenest ingredients.

The exterior is largely wrapped in reclaimed wood from a 100-year-old barn in Grove City. The entire family pitched in to char and oil the barn wood, a process that ensures both a natural patina and protection from the elements. 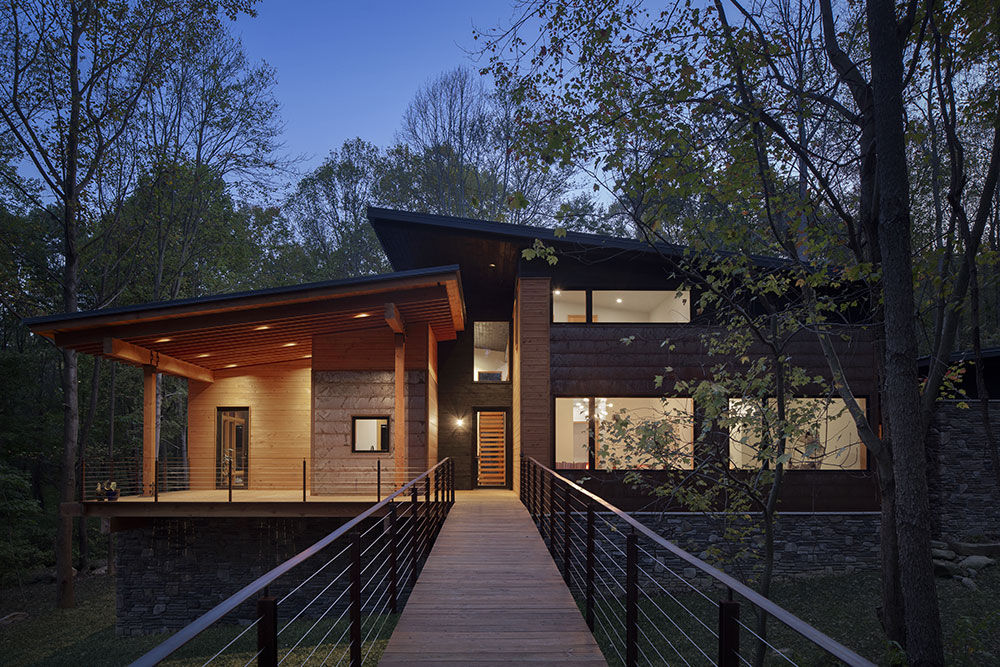 All of the principle metal details, including the gutter, the range hood and two fireplaces, are constructed of corten steel, which turns a lush auburn hue as it develops an insulating layer of rust.

The great room windows open at an angle that captures the property’s predominant breeze.

Almost all of the building materials were sourced locally. The Douglas fir used for framing was milled in Ohio; the massive concrete island and fireplace hearths were poured in Zelienople; the hickory flooring came from just down the road in Portersville.

The trees that had to be cleared for construction now serve as firewood. 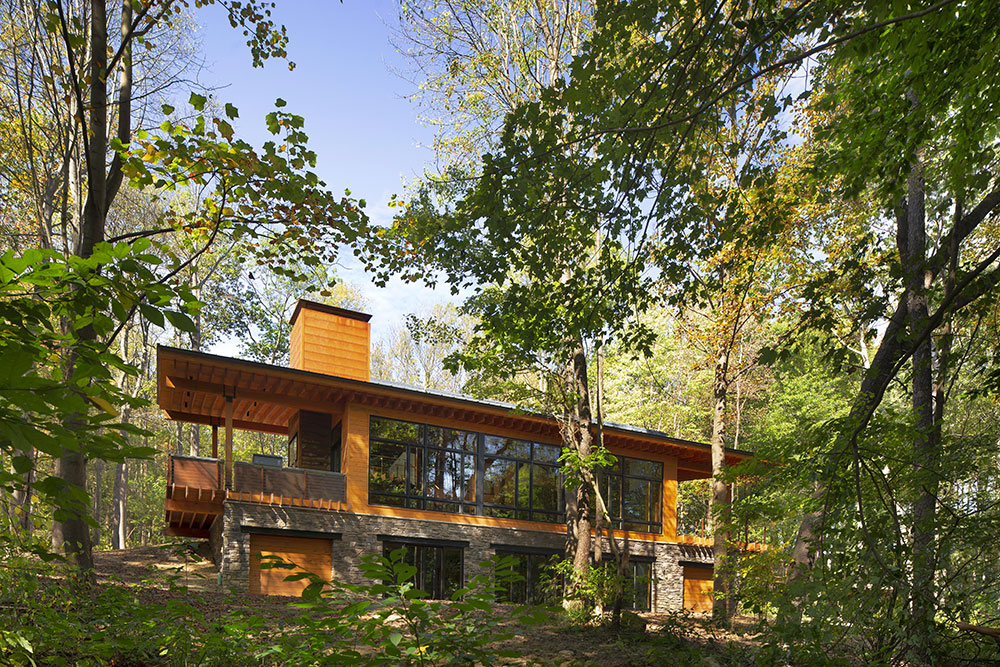 Even the labor was local. Gaskill, who served as the general contractor, hired a team of Amish craftsmen for construction and fabrication.

Still, in the world of green design, few elements matter more to the home’s overall sustainability than the type of energy used to heat and cool it. Gaskill chose the gold standard: geothermal.

Eight wells on the property, each 200 feet deep, pump water up from the earth and into the home, where it is captured by a heat pump. Because groundwater maintains a near-constant temperature of 55 degrees, it is typically warmer than the air above it during the winter and cooler during the summer, therefore requiring less energy (and money) to heat and cool. Most experts agree the process is nearly five times more efficient than a fossil fuel furnace.

Unfortunately, it also comes with a hefty initial investment, making it a daunting proposition for even the most eco-minded homeowner. Gaskill has become something of a geothermal proselytizer, urging clients to consider the tax credit and cost savings over time. But it’s been an uphill battle.

“I try to educate and guide and lead that process as much as possible,” Gaskill says. “But the client has to be willing to invest.” 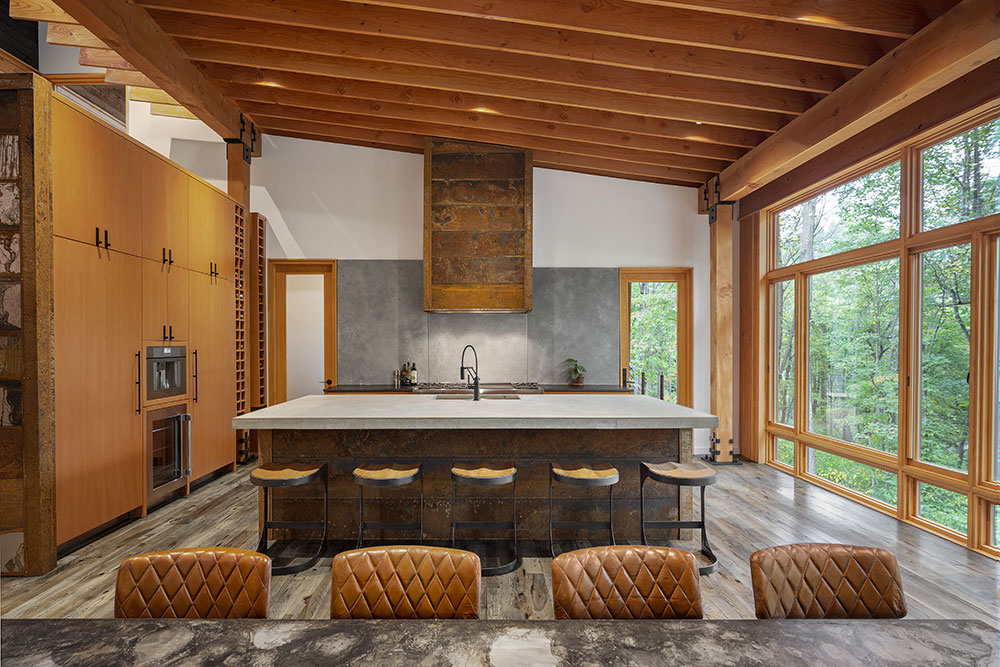 Because the family has lived in their home for less than a year, they are still filling it and finishing those lingering projects that every new build requires. Come spring, the exterior will be landscaped with plants native to Pennsylvania and the basement will eventually get a pool table, pinball machines, ping-pong table and a craft room.

Gaskill admits that he is mostly content to relax and enjoy what he’s created. Though he meticulously drafted each detail in the house, he rarely studies the individual pieces. Instead, he looks at it as an organism, each element requiring and sustaining the next.

“It’s about the experience of the space,” he says. 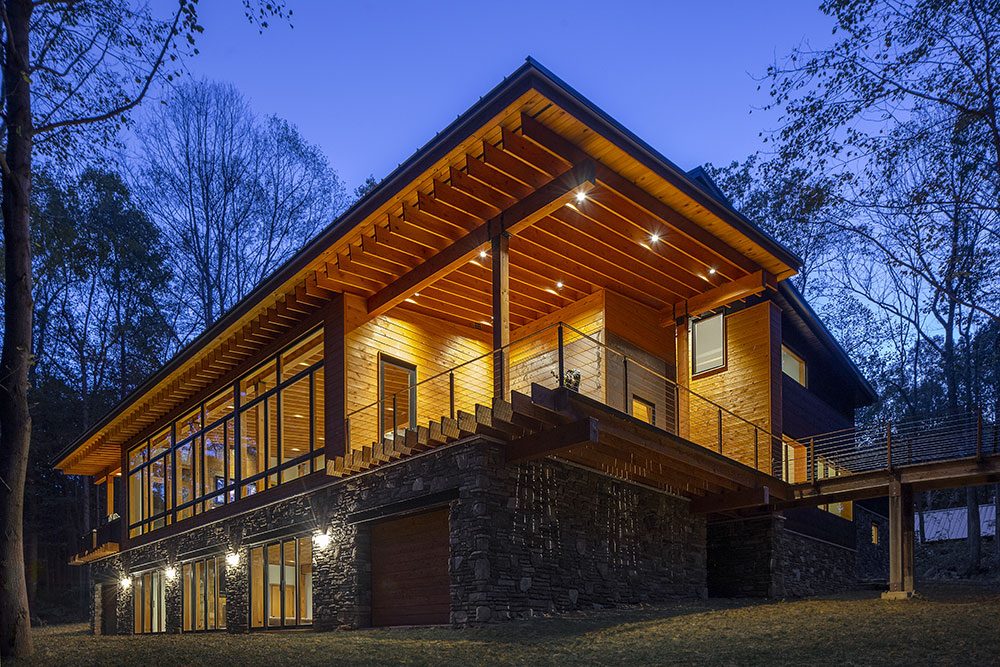