A Wedding Every “Star Wars” Fan Will Appreciate

Alexa Fitting and Bryan Heim celebrated their love and paid homage to what started their love story — food trucks, beer and “Star Wars.” 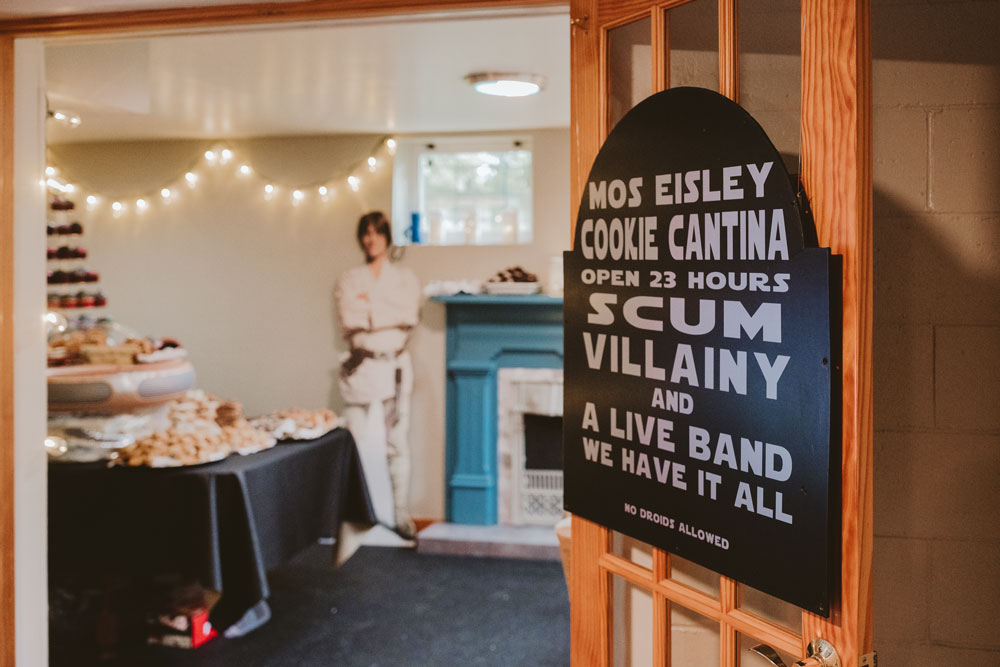 It’s a love that connects back to when they met.

“We started talking because his roommate was hitting on me but failing miserably,” says Alexa. “His roommate asked if I liked ‘Star Wars,’ and I started nerding out because I used to work at Disney and do ‘Star Wars’ tours and it piqued Bryan’s interest… Then, we just couldn’t stop talking.”

Post-engagement, Alexa immediately contacted Hot Metal Studio to see if her friend Tiffany Cooper, a photographer at the studio, was available.

“She was only available May 4. It was a sign that we had to get married then,” says Alexa.

May 4th or “May the 4th be with you” has become an annual celebration for “Star Wars” fans playing off, “May the force be with you.”

There was just one problem: May 4 was only six months away. But Alexa took on the challenge.

The bride-to-be spent the weekend after her engagement planning every detail for the wedding. Wanting a “neighborhood wedding,” Alexa and Bryan booked vendors owned by friends and family, which Alexa found to be very helpful in ensuring plans went smoothly, and held the reception at her childhood home in Bradford Woods, near Cranberry.

“The most important thing was that everyone that participated in the wedding was someone that I knew personally. There was not one stranger, so it made it so much easier to have a natural wedding,” says Alexa. “Everyone we knew was helpful in planning quickly.” 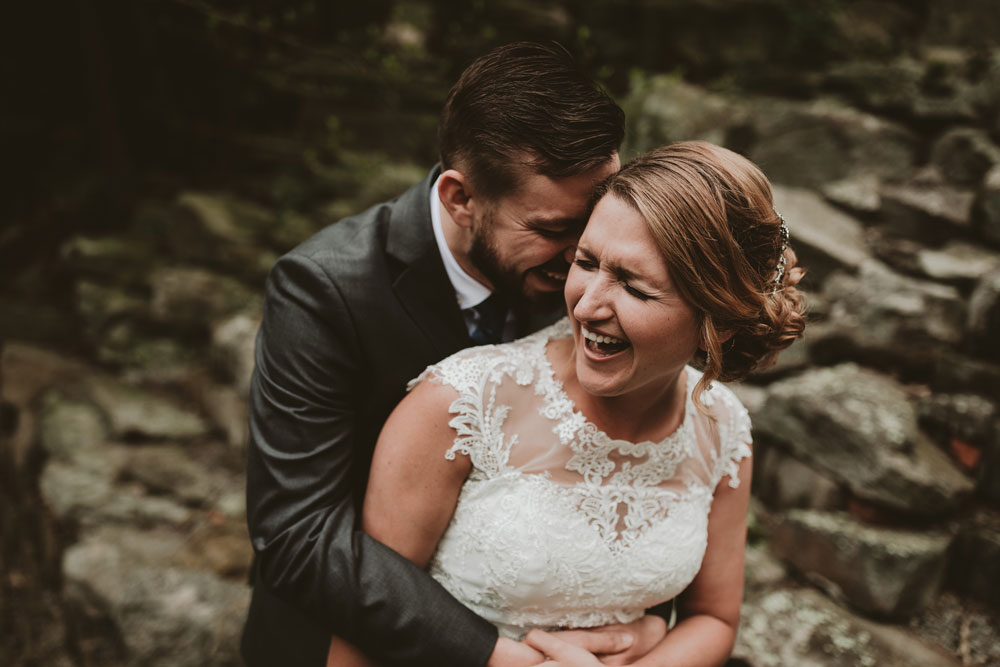 Reception guests ordered food from either the Blue Sparrow or La Palapa food trucks and Medure’s Catering, and kegs were brought in from Allegheny City Brewing Company.

“We met at Allegheny City Brewing Company where we work,” says Alexa. “We have food trucks all the time at the company so I developed a relationship with the people from the trucks and I couldn’t have imagined the reception any other way. We paid homage to beer, food trucks and ‘Star Wars,’ which brought us together.”

Film references began during the ceremony held in Alexa’s childhood home church, Bradford Woods Community Church. The bridal party walked in as “It’s a Beautiful Day in the Neighborhood” from “Mr. Roger’s Neighborhood” played, and Alexa followed close behind to the theme song from “Jurassic Park.” Next came the “Star Wars” references.

“During the ceremony, our pastor quoted ‘Star Wars,’ and then I had a bridesman on my side and a groomsman on Bryan’s side who hid lightsabers in the church, and they walked down the aisle with them after the ceremony to the ‘Star Wars’ march,” says Alexa. “It was a very lively wedding.” 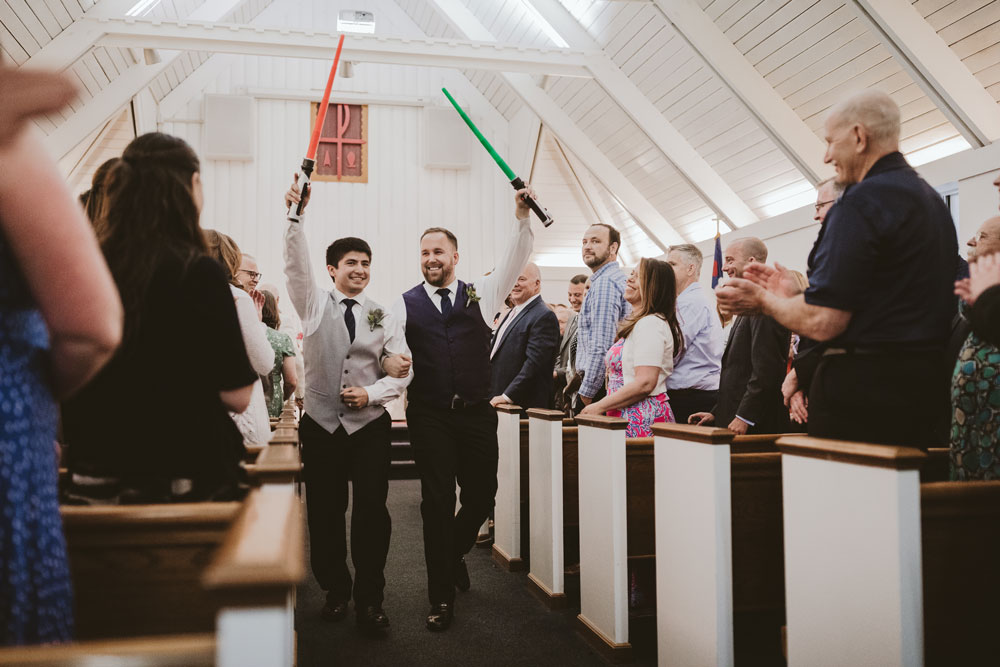 At the reception, the fun continued with the decor. As a part of the Pittsburgh cookie table tradition, each guest brought a plate of cookies and placed it in the couple’s cookie room, decorated to resemble the Mos Eisley Cantina. Lifesize cutouts of Luke Skywalker, Han Solo and Chewbacca watched over the guests, and Luke Skywalker’s Landspeeder sat in the center of the room filled with cookies and cupcakes.

“Everyone was losing their mind over the cookie room,” says Alexa. 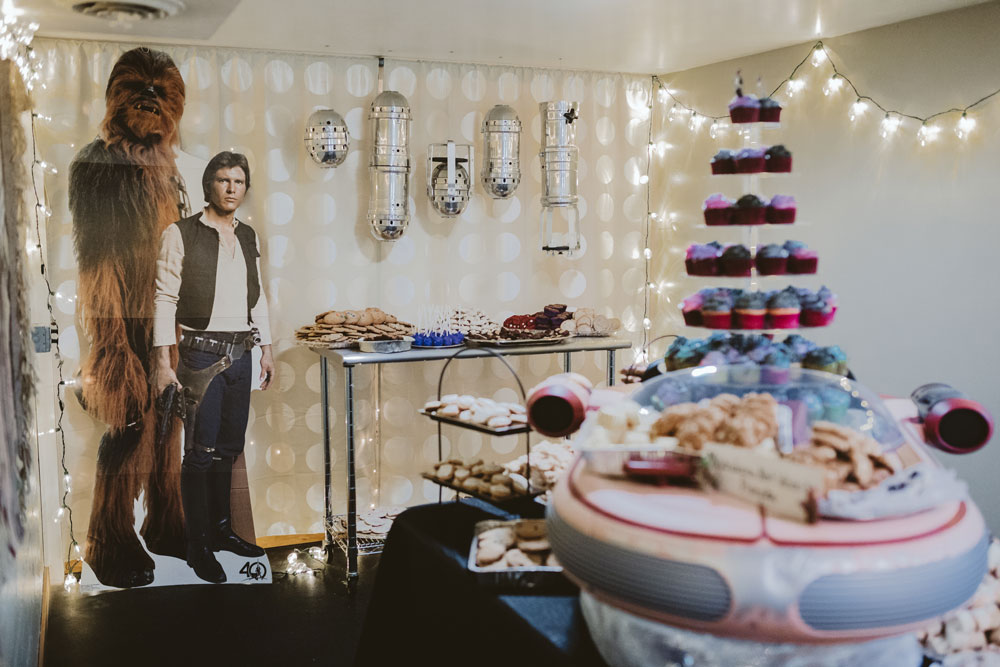 “In the garage, we had it set up for the older crowd of the wedding, and we hid little Ewoks looking down at them,” says Alexa.

Other “Star Wars” details included: place settings with Yoda quotes, toy versions of the characters holding table numbers, an R2D2 trash can, lightsabers holding up signs for beverages, Princess Leia and Han Solo cupcake toppers, and a black “Star Wars” table cloth for the couple’s sweetheart table. All of the decorations were made by hand with the help of the couple’s family and friends.

“The guests loved it, but they wouldn’t have expected anything less,” says Alexa. “If you know Bryan and I, you know we love ‘Star Wars.’”