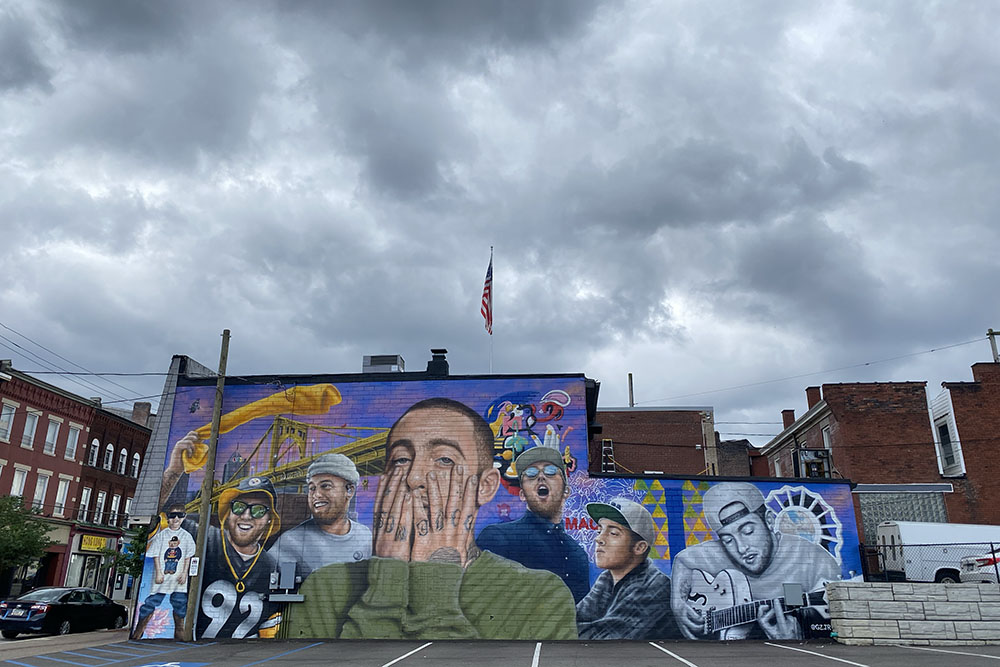 A new mural at I.D. Labs in Etna serves as a touching tribute to renowned Pittsburgh rapper Mac Miller.

Spanning the entire side of the building, the artwork paints Miller in a (quite literally) larger than life manner. It features seven portraits of the artist alongside multiple hidden tributes to his music and odes to his Pittsburgh heritage including the Terrible Towel, the city skyline and one of Pittsburgh’s many bridges.

Dan explained that the original concept was proposed by the artist, ​​Gustavo Zermeño Jr., who worked with Nick Flax to create the mural. The project took about two weeks to complete. Zermeño has painted murals of Miller previously, but wanted to pay tribute to the musician’s history in Pittsburgh.

The mural pays particular attention to Miller’s growth as a person and as an artist throughout his lifetime. Multiple depictions of Miller at different points in his life emphasize how he matured and grew through the years.

The artwork is beautiful in photos, but even more detailed and intricate when seen in person. At a glance, the mural depicts multiple portraits of Miller at various stages of his life. Up close, though, hidden tributes to his music start to appear, including a little hanging angel that references Miller’s 2013 album “Watching Movies with the Sound Off” and a diver referencing his 2018 album “Swimming.”

“You immediately see the giant portrait in the middle and you can see all the details, but it’s not until you’re really standing in front of it that you really start to notice that stuff, and it just makes it special. I mean, to have to come see a piece of art in person to really grasp the detail of it and the intensity of it is just something cool,” Dan says.

Mac Miller, who died at age 26 of a drug overdose in Studio City, California, kept Pittsburgh close to his heart during his lifetime, according to Dan. The Steel City was instrumental in Miller’s artistic development and it majorly influenced his music career.

“I think that Pittsburgh, being a smaller town, especially in the music world, guys that have come out of here and gone to bigger fame always sort of keep that in their back pocket, as something special that they came from this smaller town and were able to make it in the greater stage of the world. Mac was no exception to that.”

Dan says that fans from many different places have made the trip to see the piece in person. “I have yet to pull up to the studio over the last few weeks and not see some person or group of people out there taking pictures.” The commitment that fans are making to see the mural speaks volumes about Miller’s tremendous impact through his music and his personal character.