A Look at The Latest Restaurant Openings in Pittsburgh 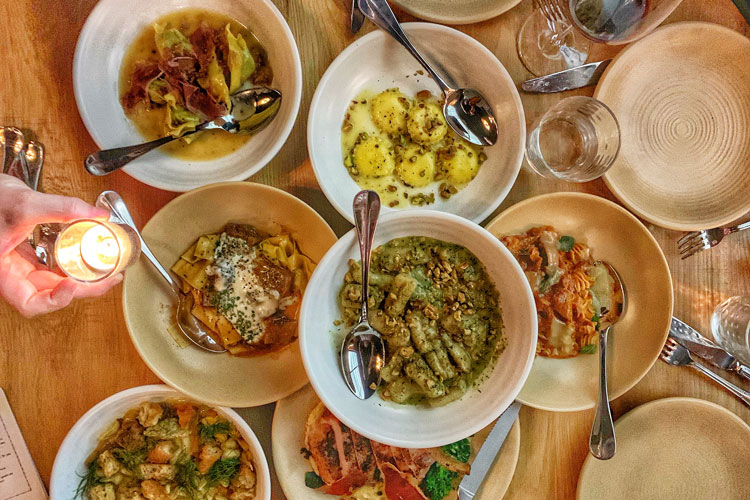 Alta Via
The big Burrito Restaurant Group opened its newest concept, Alta Via, earlier this month. The heart of the restaurant is its wood-fired hearth and the menu focuses on vegetable-forward dishes and house made pastas. The space is large enough to seat 90 diners and has room for an additional 40 people at the horseshoe-shaped bar. The name — inspired by the path that leads through the Dolomites, a mountain range in northeastern Italy — points to the cultural roots of the recipes and ingredients. True to the roots of big Burrito, especially its president and corporate chef Bill Fuller, there are some nods to northern California as well. Northern Italian wines, as well as negronis, grace the bar list.
46 Fox Chapel Rd., O'Hara Twp.; 412/408-3816, altaviapgh.com

Leo. A Public House
Michael and Yelena Barnhouse opened Lola Bistro, an intimate restaurant in Allegheny West, in 2012. Last week, just a few blocks away in Manchester, Michael Barnhouse has opened Leo. A Public House. The bar and restaurant have a cozy, old world vibe and the food reflects that, with Barnhouse curing his own meats and making gravlax. Leo is dedicated to Barnhouse’s grandfather, Leo “Bull” Handler and a large photograph of him as a roguish 20-something adorns the wall alongside Barnhouse’s own paintings.
1207 Allegheny Ave., Manchester, North Side; leopgh.com

The Milk Shake Factory
The Milk Shake Factory is now bringing its sweet treats to Oakland. The concept for this family-owned business (they also operate Edward Marc Chocolatier) began in 1914 as a soda fountain and has been evolving since. Milkshakes are the staple of the menu but customers can stop by for a sundae, a soda, seasonal drinks and dairy-free shakes as well. The company sources its dairy from Rivendale Farms in Washington County. Oakland is the fourth location.
3612 Forbes Ave., Oakland; 412/904-4845, themilkshakefactory.com

Penn Brewery
Penn Brewery has been making craft beer on the Northside since 1989. Now, a Downtown tap room is open and serving seasonal and classic German-style brews as well as sandwiches and snacks. Go for happy hour or fill up a growler to take home.
432 First Ave., Downtown; 412/391-5140, pennbrew.com

Stonewall Cider House and Meadery
Cidermaster Joshua Niese and his business partner Artilio Campisano opened Stonewall Cider House and Meadery early this month. Just outside the city in Verona, this small café offers five different house made ciders and meads, some in classic styles and some more experimental. For example, Niese’s Tepache is made with the peel and rind from pineapples and another of his ciders is infused with black tea. Stonewall also offers a cocktail menu featuring Pennsylvania spirits, as well as local beers and wines.
723 Allegheny River Blvd., Verona; 412/828-9911, facebook.com/stonewallciderhouse

412 Brewery
412 Brewery, a five-barrel brew house in McKees Rocks, has opened a taproom in Allegheny West. The former laundromat is now a cozy bar and offers eight house brews as well as a local cider or mead. The space is pet-friendly and an outdoor patio is expected to open in the warmer months. Sip on some $4 beers on Thursdays and Fridays from 3 to 5 p.m. during its happy hour.
847 Western Ave., North Side; 412/498-3836, 412brews.com