40 North at Alphabet City to Open This Summer

Bethany Zozula, formerly of Whitfield at Ace Hotel, will helm the new restaurant attached to City of Asylum. 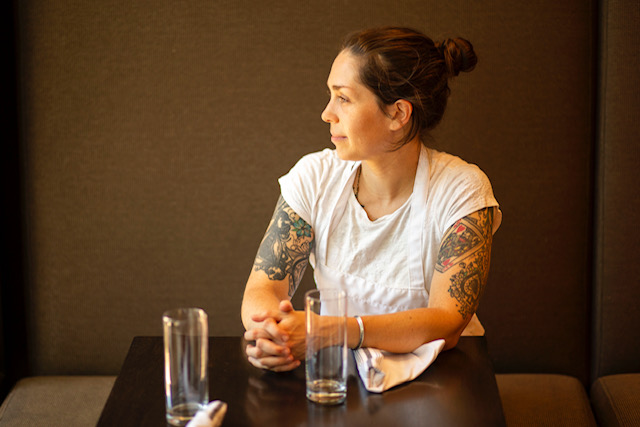 A new restaurant is coming to Alphabet City on the North Side.

It’s called 40 North at Alphabet City, and it’ll be run by Bethany Zozula, who previously worked as executive chef of the now-closed Whitfield at Ace Hotel. Sam Suter, formerly of Ace Hotel and Union Standard, is the establishment’s beverage director. Zozula says the entire kitchen staff as well as nearly all front-of-house staff are Ace alumni, too. The building’s previous restaurant, Brugge on North, closed in June.

“It all happened fast. They contacted me in March. I checked out the [City of Asylum] space and was immediately intrigued,” Zozula says.

Zozula took inspiration from the various stories and culinary influences in her life to build her opening menu. She will serve a scratch-made falafel inside a tortilla prepared from a recipe she’s made with her mother since her childhood. There’s a chicken sandwich based on a staff meal served every Saturday at Eleven Contemporary Kitchen, where Zozula was a chef for six years prior to moving to Whitfield. Khachapuri — a dish she learned from an early mentor, David Kadagishvili, chef/owner of Chef Dato’s Table in Latrobe — is something she says she’s looking forward to serving.

Zozula says there will be significantly more vegetarian and vegetable-forward dishes than there were on the butcher-shop-focused Whitfield menu.

“The thing that I found being at home for a year-plus is that I continued to cook nonstop. I continued to express my feelings through food, to find joy in food. I really just love the act of feeding people, is what it comes down to,” Zozula says.

To that end, although the menu likely will be drafted in a conventional format with appetizers, salads, main courses and desserts, she envisions its execution will allow for a mix-and-match arrangement of dishes that will allow for everyone, from solo to special-occasion diners, to craft a rewarding experience.

“It’s not about me showing someone how good I can make food; it’s about offering someone food that feels good. I don’t want to dictate the experience. I want to replicate the feeling of being taken care of by somebody at their home,” she says.

Community has long been a focus of Zozula’s culinary perspective. To that end, she plans to use her experience at the multifaceted Ace Hotel to knit 40 North’s dining experience more coherently into City of Asylum events (when they resume indoors) than past restaurants have in the space. Down the road, she plans to revive collaborative events with Pittsburgh’s chef and grower community, much as she did with the Sharing Knives and Sharing Farms series at Ace.

Zozula says 40 North likely will open toward the end of June, but an official opening date has not been set.