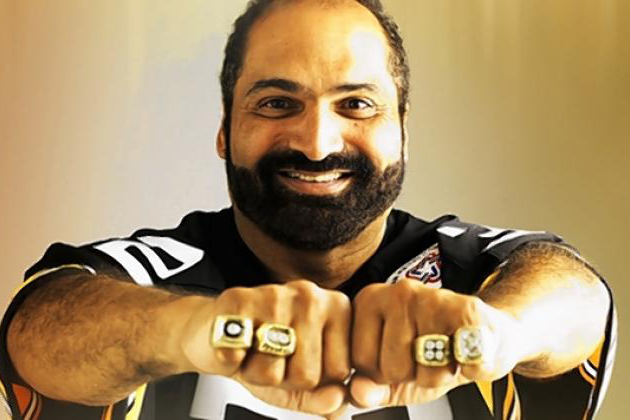 An NFL Man of the Year and Hall of Famer.

Every Pittsburgher is familiar with Franco Harris. And your chance to meet the Pittsburgh Steelers legend is almost here.

During his years with the Pittsburgh Steelers, Harris set the standard for NFL running backs —  big, fast and agile with explosive cutback ability. He established many team and league records, played in nine Pro Bowls, and led the Steelers’ charge to four Super Bowl victories.

Harris was named MVP of Super Bowl IX. His Immaculate Reception in the final seconds of the 1972 AFC playoff game against the Oakland Raiders is considered to be the greatest individual play in NFL history.

After football, Harris applied himself to his college degree in Food Service and Administration from Penn State. He started multiple companies including Super Bakery and Eco Product Group LLC. In addition to his community involvement, Harris spends a lot of time reading and researching food trends and innovations, as well as serving as a member of the Advisory Board of the Penn State Center for Food Innovation. His interest in high-quality food and beverage products is what drew him to Comisario Tequila.

Comisario Tequila is made from Jalisco, Mexico-grown Blue Agave that is nurtured for nine years until it is at its peak richness and flavor. It is distilled using pineapple-shaped agave hearts that are cooked and crushed, then fermented with a special yeast. This unique process gives Comisario Tequila its ultra-premium taste and smoothness.