Which Feminist Legend Just Got Her Own Statue at Pittsburgh International Airport?

Nellie Bly has assumed her place among the likes of Franco Harris and George Washington in the Airside Terminal. 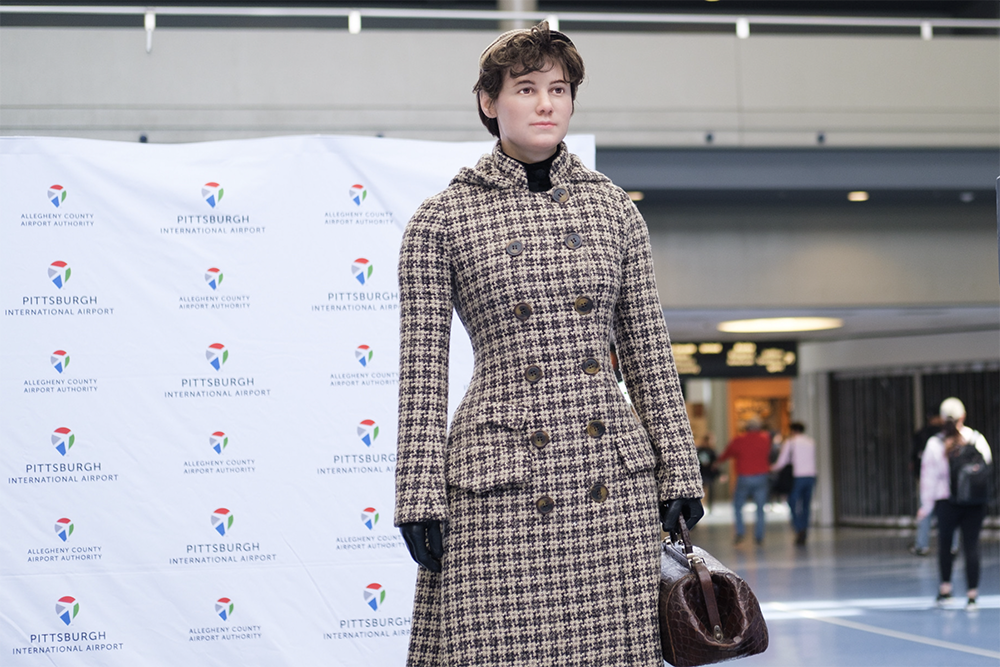 What does Nellie Bly have in common with George Washington and Franco Harris?

For starters, they’re all memorialized at Pittsburgh International Airport.

The airport recently unveiled a statue of Bly, a 19th-century pioneer in both journalism and aviation history, right next to the statues of Harris, one of the Steelers greats, and founding father Washington.

Originally from modern-day Armstrong County, Bly became a household name in 1889 for an around-the-world trip she completed in a record-breaking 72 days, 11 minutes and 14 seconds after her departure on a steamship from New York. The journey was inspired by Jules Verne’s acclaimed novel “Around the World in 80 Days,” and she beat him by more than a week.

She chronicled her travels in a series of articles for the New York World newspaper and ended up writing a book of her own, “Around the World in Seventy-Two Days,” which she published in 1890.

Bly was born Elizabeth Jane Cochran but worked during a time in which female journalists often assumed noms de plume. Hers came from the song “Nelly Bly” by fellow Pittsburgher Stephen Foster.

Her statue’s unveiling was originally slated for March 2020, but the pandemic had other plans and the endeavor was put on hold. Two years later, Bly took her place in the Airside Terminal on what would’ve been her 158th birthday.

“She went by horse, by boat, by carriage, by foot, by camel. She made it around the world in 72 days,” Masich said at the unveiling earlier this week. “She shocked the world. Nobody thought that was possible.”

Her statue dons a replica of her signature long coat and handbag — a nod to the outfit she wore on the day she left for her trip. Having her at the airport was made possible in a partnership between the Heinz History Center and the Allegheny County Airport Authority. The goal, officials said, is to bring more of the region’s rich culture and history to the terminal.

Harris, a Hall of Fame running back who played for the Pittsburgh Steelers from 1973 to 1982, visited the airport the day before Bly’s statue was unveiled. He said he’s honored to have his likeness among such prominent figures.

“Our family of statues is growing. I love it,” he said. “I have to tell you I’m very humbled but very blessed to be able to be a part and share this airport with them.”

Bly was also an early advocate for women’s rights and a staunch supporter of the women’s suffrage movement. Later in her career as a journalist, she went undercover as a patient at Blackwell’s Island Insane Asylum for Women in New York City and exposed the mistreatment of the women warehoused there. The series of articles, originally published in the New York World, would go on to become a book titled “Ten Days in a Madhouse,” published in 1887. Although she temporarily retired from journalism in the 1890s, she returned during World War I as one of America’s first female war correspondents. She also secured a few patents as an inventor before her death in 1922.

“This is a woman who made a big difference in the lives of women. We should all know her name, and we should all see her every time we come back from a trip because she really was a traveler,” Cassotis said.