What Lurks in the All-New ScareHouse?

With a new location (and a COVID-19 safety plan), the ScareHouse is open for thrillseekers 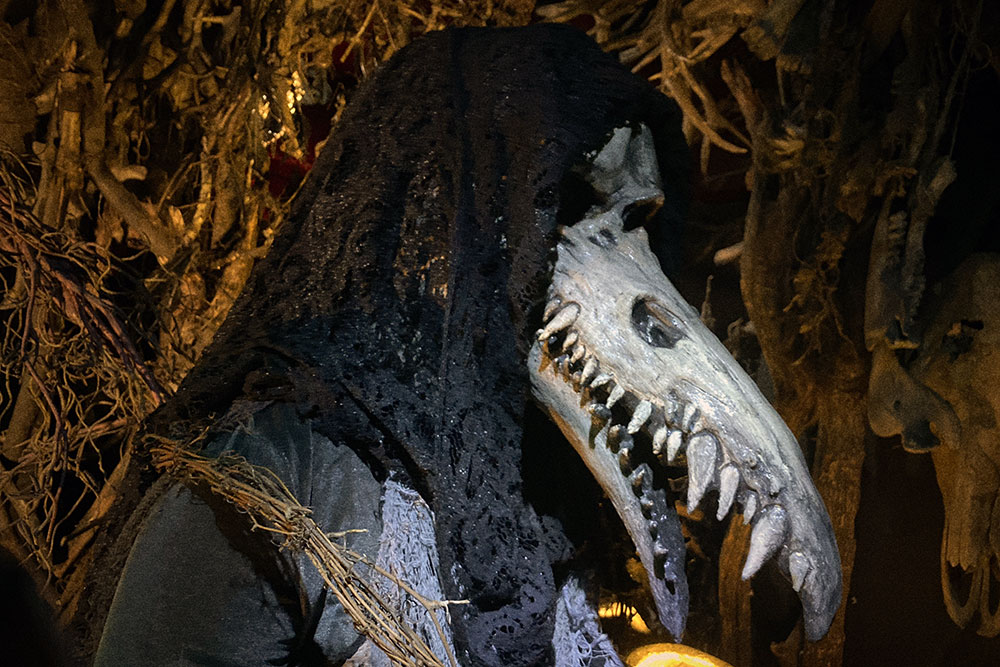 In the Pittsburgh area, we know perfectly well that a shopping mall can be the site of terror. Monroeville’s claim to fame, after all, is filling its eponymous mall with shambling zombies in George Romero’s classic “Dawn of the Dead.”

Nevertheless, it’s a little surprising to face down a house full of ghouls and monsters just across the aisle from a Bath and Body Works.

The ScareHouse, the long-running haunted attraction that for many years made its home in a century-old Etna building, has relocated to the Pittsburgh Mills mall. Two years ago (the attraction was shuttered in 2019 in advance of the move) guests were poking around a towering and purportedly haunted Elks Lodge.

This year, they’ll be visiting a former H&M.

“You do certainly lose something in the ambiance in the buildup,” says Scott Simmons, the attraction’s co-owner. “I think the infrastructure of the mall was what we really needed, with the parking … It’s nice to have air conditioning, it’s nice to have heat.”

Simmons invokes Walt Disney’s philosophy in designing a pleasant exterior for the famous Haunted Mansion ride: It’s spooky enough on the inside. On the outside, it should fit with its surroundings.

No matter how mall-like the front door may be, the inside is an effective — and surprisingly robust — haunted attraction. As you snake through three distinct settings, you’ll struggle to believe you’re still inside what was once a single clothing store; lighting and fog effects even suggest, at some points, that you’re outdoors. (You’re not — it’s an effect of painstaking efforts to paint all ceilings and walls pitch black.)

“We work to very quickly throw you into that creepy ambiance when you walk in,” Simmons says.

The move coincides with a very uncertain year for Halloween attractions as the COVID-19 pandemic has rendered many in-person activities impractical. Simmons says the new space was designed from the ground up with pandemic precautions in mind.

“If we were still in Etna, I doubt we could’ve been open this year safely,” he says, “because that building does not have some of the features that this space does, that allowed us to open.”

Those include the ability to snake the attraction’s queue through a massive — and currently vacant — food court space, allowing for social distancing in the line. All tickets must be purchased in advance, for specific times, to reduce the number of guests waiting and allow for contactless admission.

Fewer actors are present than in typical years, with lighting and sound effects, as well as old-fashioned stagecraft, carrying a part of the fright burden. Most actors who are present are behind plexiglass or thick curtains; the few that will be in the same room as guests maintain a distance of more than 6 feet. Additionally, the store’s HVAC system is continually running, sweeping air out at a good clip — as evidenced, Simmons says, by the fact that the attraction is going through much more theatrical fog than usual.

“We are doing everything we can to keep it as safe as we can, [but] I understand if somebody still feels like, ‘Maybe next year.’” While noting that staying moving along a set path is inherently safer than, say, remaining seated and sharing the same air, Simmons acknowledges that any trip out (particularly to an indoor destination) carries some inherent risk; he stresses that those who’d rather not take any chances during the pandemic won’t miss out on the ScareHouse’s new home.

“We’re not going anywhere; this is our new permanent home.”

Those who choose to attend this year will get a loose narrative that briefly shoots unsuspecting guests into a neon-soaked alternate dimension. The haunt’s opening scenes, for which each group will be armed with a flashlight, depict a monstrous invasion of an old-school haunted house; eventually, guests open up a portal into another world, defined by disorienting lights and dark corridors.

Upon returning, guests will find that they’ve stumbled onto a zombie outbreak on the streets of Pittsburgh. (Yes, there’s the occasional nod to the obvious zombie/virus parallels, but nothing that will ruin your fun.)

And it’s all contained in a former clothing store. “It was hard to get my head around it,” Simmons says. “It didn’t seem large enough until we started actually doing the floor planning.”

The ScareHouse is open Fridays, Saturdays and Sundays through Nov. 1, and Fridays and Saturdays only through Nov. 14. All tickets must be pre-purchased, and guests will only be allowed to proceed through the attraction with their own party to ensure proper social distancing. More information about COVID-19 safety protocols can be found at the ScareHouse website.

Categories: Hot Reads, Things To Do