Using a Chainsaw, Richard Bubin Has Been Carving Ice Sculptures For Four Decades

The Churchill native creates masterpieces out of blocks of ice, fruit and vegetables. You can see one of his larger creations at First Night. 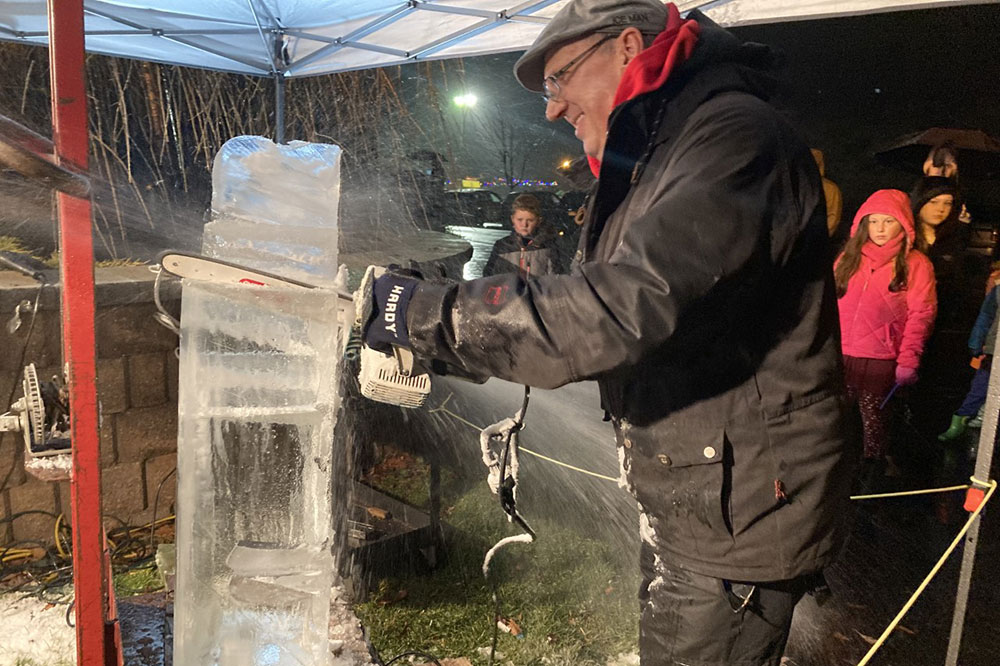 Three hundred pounds of ice sat in front of Richard Bubin of Churchill.

To the artistically challenged, such as myself, the block was just a block.

However, Bubin, 61, master ice carver and founder of Pittsburgh’s Ice Creations, envisioned Rudolph the Red-Nosed Reindeer inside the gleaming cube. He commissioned assistance from his trusty chainsaw and skillfully slid the blade into the frozen 55 gallons of water. 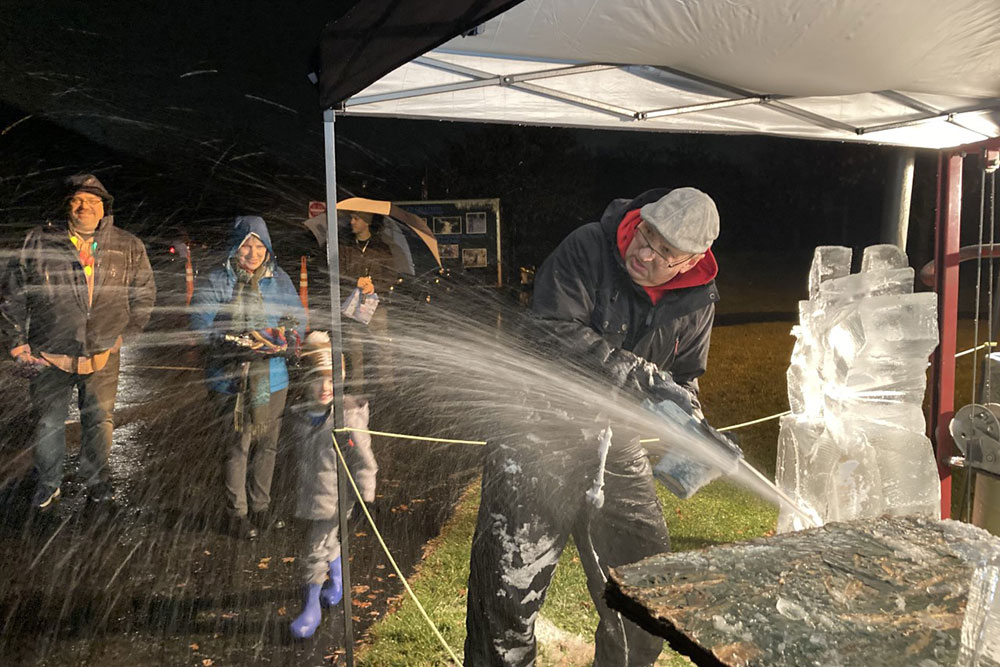 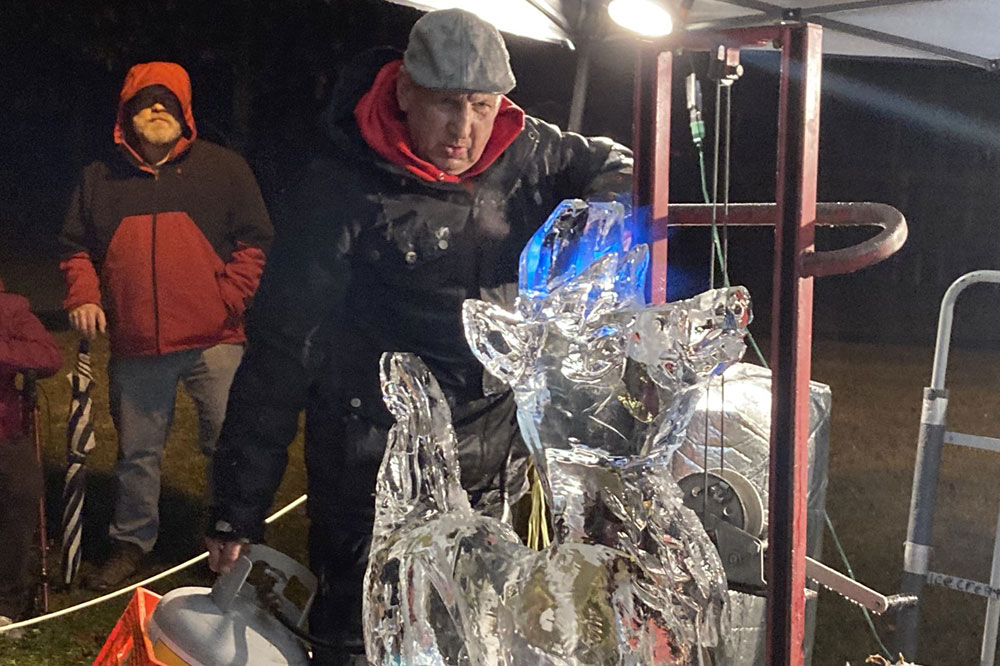 Thirty minutes later, Rudolph stood there in all his glory. However, Bubin wasn’t finished. Shocked children watched as he fired up a flamethrower to slightly melt his creation. The technique gave Rudolph a crystal-like finish, proudly glistening in the floodlights. Bubin then added the finishing touch — a plastic blinking red nose. 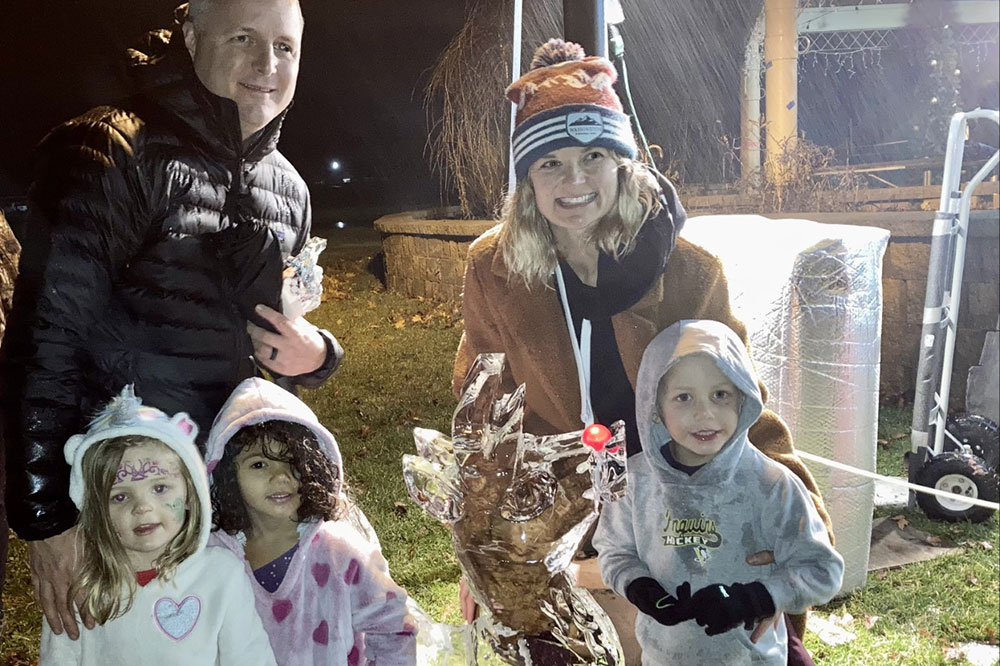 Pittsburghers attending First Night festivities Downtown will be able to see one of Bubin’s masterpieces with the 150-block, 5-foot tall ice maze at 819 Penn Ave. Bubin will begin carving the frozen labyrinth at that spot on Dec. 28, but it won’t open to the public until Dec. 31.

This will be the second maze Bubin contributes to Pittsburgh’s New Year’s Eve festivities. The first one was double the size — 300 blocks — in celebration of the 20th anniversary of First Night in 2013-14. 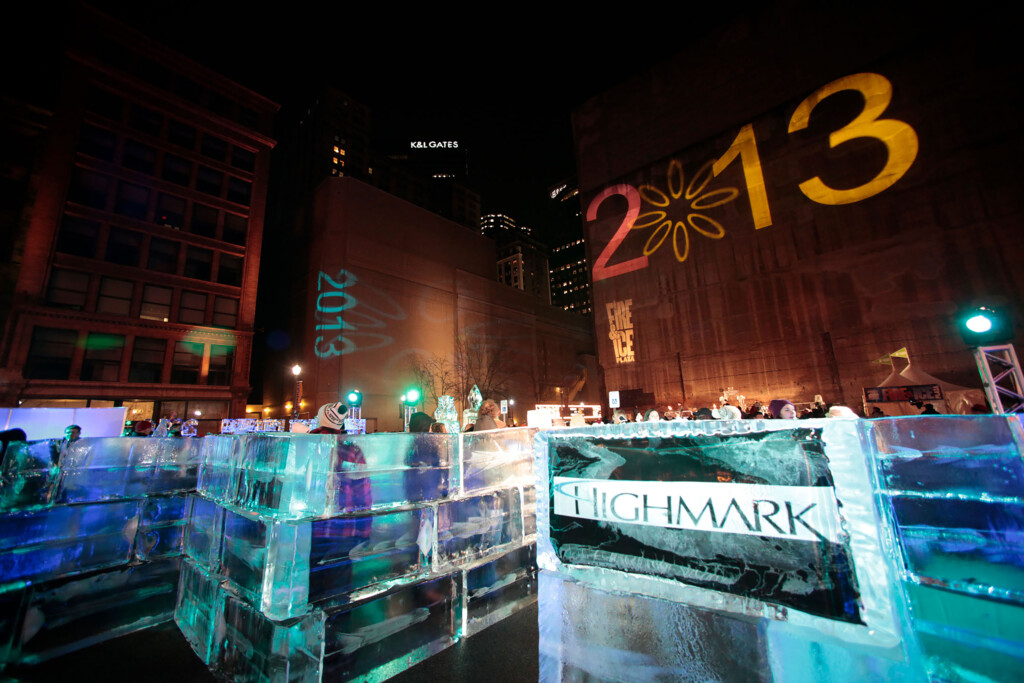 If crowds aren’t your thing, the maze will remain at the art installation until it melts.

Bubin, one of nine children of Delores and the late John Bubin, says he has always been skilled with a pencil and paper — or the walls in his home. Today, power and hand tools serve as his pencil.

“When I was a kid, I would color my parents’ walls, I would draw my dog, my cat,” he laughs. “I could look at things and reproduce them.”

Bubin says the creative genes are in his blood, as he comes from a family of artists, chefs and athletes.

In his late teens and early 20s, Bubin worked his way up from busboy to head chef at the former Holiday Inn in Braddock Hills.

He purchased Japanese sculpting books to work on his food presentation and began carving animals and other scenes into fruit displays. Later came pumpkin carving, which he still dabbles in, along with fruit. Bubin watched an ice carver sculpt a creation for an event at the hotel, and the rest is history.

“I bought some used tools and basically taught myself to do it. I would carve one or two sculptures a week,” he recalls. “The guy who supplied the ice asked me in the late 1980s to enter a competition Downtown and I ended up winning with my carving of a harp with a swan on top. That just motivated me to start competing around the world.”

Bubin’s skill has taken him to every state except Hawaii, Canada, Mexico, the Bahamas, Jamaica, Italy, France, the Netherlands and Japan. Surprisingly, Bubin says he carves ice year-round — he’s even watched his creations floating on a pool.

“Once the block is carved, it still weighs about 250 pounds. In 90-degree heat, it will take at least 6 or 7 hours to melt completely,” he notes.

Bubin served as captain of the U.S. ice carving team during the 2002 Winter Olympics in Salt Lake City. Two weeks later, he traveled to Toronto and shattered Laurent Godon’s previous 10-hour Guinness World Record of the fastest ice carver by carving 61 blocks of ice in 4 hours, 22 minutes and 55 seconds, a title Bubin held for 11 years.

In the four decades since he picked up his first chainsaw, Bubin has carved more than 250,000 blocks of ice, including a 12-foot sculpture of Michael Jordan slam-dunking a basketball in celebration of Jordan’s retirement from the Chicago Bulls; displays for Kennywood’s Holiday Lights and Fourth of July celebrations; the ice maze at Pittsburgh’s First Night; and countless weddings, graduations, family reunions and birthday parties.

“Anytime the Penguins, Steelers or Pirates need an ice sculpture, they come to me. Once I told Mario Lemieux he was the master on the ice, and he replied, ‘You’re the master with the ice.’ That was a great compliment!”

His favorite sculpture was a 17-foot-tall and 17-foot-long Puff the Magic Biker — a dragon riding a Harley-Davidson, based on a tattoo he saw in a magazine. The sculpture won him the title of Grand Champion at the National Restaurant Association Show competition in Chicago. 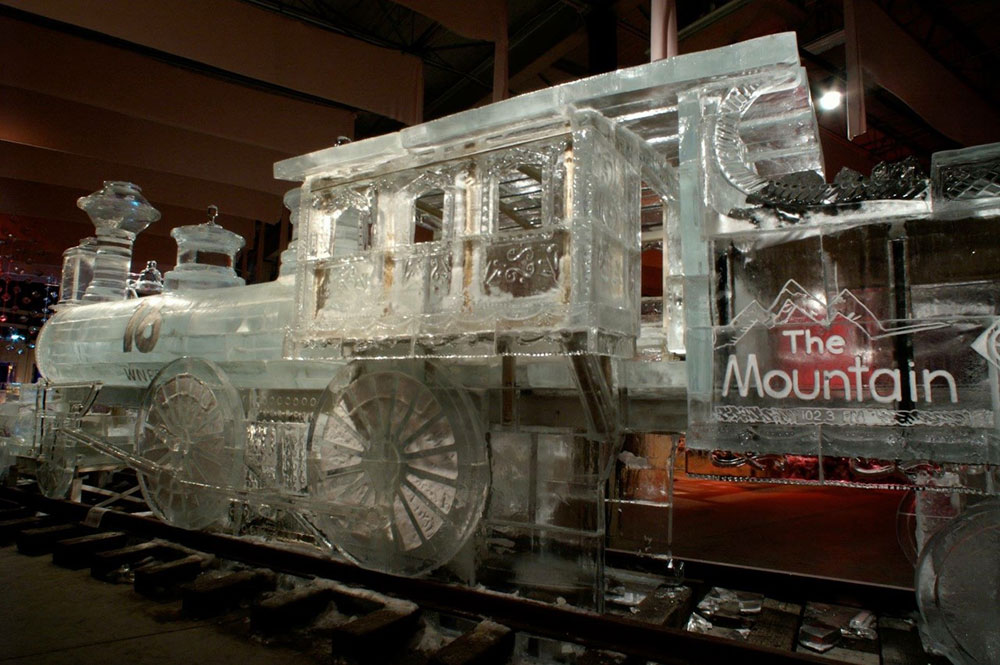 The largest sculpture he contributed to was a month-long project for a fundraiser for homeless children in Eighty-Four. A 900-block, life-size ice train, complete with engine and caboose, sculpted by 20 of the world’s top ice carvers. Bubin’s handiwork featured carvings of the elite eating filet mignon in the dining car, a child outside feeding a cracker to a dog and a coal miner in an outhouse reading a Sears catalog.

Bubin says he is blessed to have such skill, and pays it forward by teaching others his craft, including his three sons. He also teaches ice and fruit carving at culinary schools and resorts.

“I’ve made a lot of great memories and a lot of ice carving friends around the world; they’re my second family.”