Tickets to the kickoff First Pour Beer Festival are now on sale. 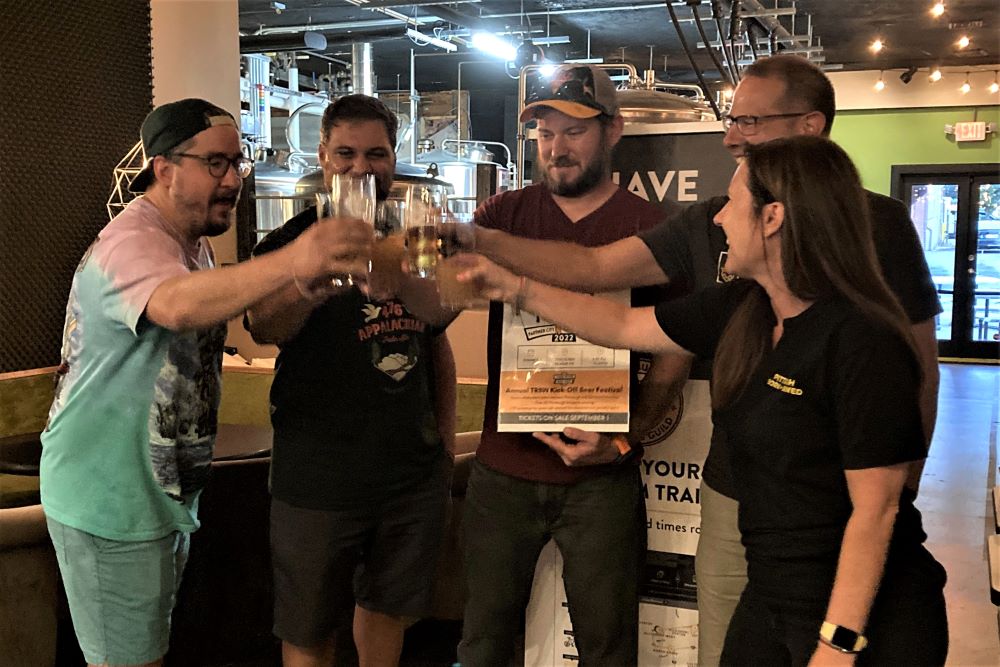 Pittsburgh and Cleveland may be foes in the National Football League, but when it comes to beer, they’re BFFs.

The Rust Belt towns are teaming up on seven special releases for Three Rivers Beer Week, which runs Oct. 2-9. Cleveland Beer Week runs Oct. 14-23 and is a little more than two hours down the Pennsylvania/Ohio Turnpike.

There will be more than 30 events throughout the eight-day celebration at participating breweries in the Pittsburgh Brewers Guild, a nonprofit organization of 48 Allegheny County taprooms. The online calendar goes live on Sept. 9. Website visitors will be able to create their own brewery-hopping adventure or follow seven predetermined brewers guild trails: North Shore, Mon River, Allegheny River, Ohio River, City, South Hills and East Pittsburgh.

A ticketed First Pour Beer Festival — the guild’s annual fundraiser — will be held Saturday, Oct. 1 from 6 to 10 p.m. at THIS IS RED, a former Munhall church that’s been converted into a 20,000-square-foot office, exhibition and event space. Tickets are on sale now.

Twenty Pittsburgh breweries will be pouring samples of their products and brewers from Cleveland will be on hand to talk barley, malt and hops. Guests will be given commemorative pint glasses to exclusively sample all of the collaboration beers under one roof. Food will be available for purchase from Mindy’s Take & Bake and Streets on the Fly food truck.

VIP ticket-holders will have early bird access to the fest (general admission starts at 7 p.m.) and to a third-floor lounge stocked with hors d’oeuvres and specialty brews. Collaboration beers, including a sparking Australian ale, an Italian pilsner and a double India pale lager, will be distributed to breweries along the seven brewers guild trails.

Organizers say not only is Three Rivers Beer Week a chance for imbibers to celebrate regional suds, it showcases the Steel City as a craft beer destination. There are more breweries in Allegheny County than in any other county in Pennsylvania.

In 2019, the brewers guild received a $75,000 grant from the Pennsylvania Malt and Brewed Beverage Industry Promotion Board to revamp and relaunch Pittsburgh Craft Beer Week, which began in 2012 when there were only five operating breweries in the county. That incarnation of the marathon event ended in 2018.

The inaugural Three Rivers Beer Week was held last October in collaboration with brewers in Asheville, North Carolina. A new partner city will be chosen each year.

The brewers guild recently received a $5,000 Emerging Festivals Fund grant from VisitPITTSBURGH. These funds will help the organization update and print the third edition of its Pittsburgh Brewery Guide. The $10 passport-style booklets are filled with information on member breweries. People who visit a certain number of taprooms and have their passports stamped can win prizes, from koozies and glassware to insulated howlers.