“Those Who Dare to Fly”: New Museum Will Highlight Black Wartime History

The Wilkinsburg-based Center for Aviation Technology and Training and Tuskegee Airmen Museum will host a soft launch this week ahead of its formal opening in June. 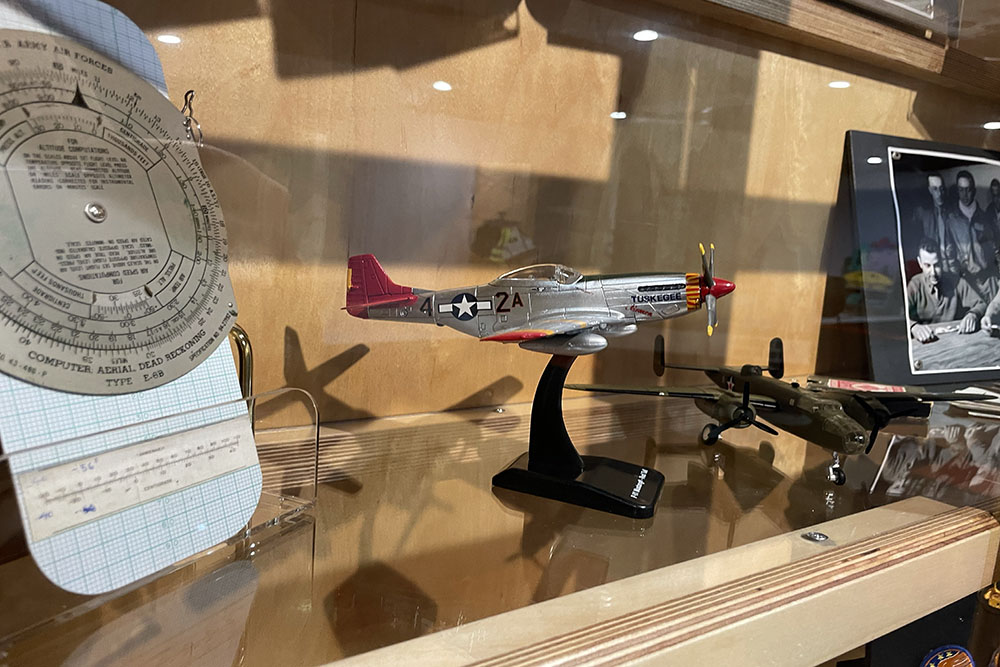 A new family-friendly museum experience on aviation is coming to Wilkinsburg.

The Center for Aviation Technology and Training and Tuskegee Airmen Museum will host a soft launch Thursday, ahead of its official plans to open later in the spring and summer. It aims to offer the region’s youth an opportunity to explore the field of aviation and aeronautics through hands-on, informal learning opportunities rooted in science, technology, engineering and math.

Created through a partnership between Hosanna House Inc. and Children’s Museum of Pittsburgh, the exhibits will open in the newly renovated space at Hosanna House’s Sherwood Event Center in Wilkinsburg.

The Center for Aviation Technology, or CATT, will consist of three main elements: a STEM makerspace and flight simulation lab, the Tuskegee Airmen Museum and indoor and outdoor interactive exhibit spaces for children. Its featured exhibit is “Black Wings: American Dreams of Flight,” organized by the Smithsonian Institution Traveling Exhibition Service in collaboration with the Smithsonian’s National Air and Space Museum. It chronicles the story of Black pioneers who, despite facing ample racial barriers, achieved greatness in the world of aviation.

Plans have been in the works for more than a year, says Gloria Nelson, director of development and social impact at Hosanna House, a 30-year-old nonprofit that provides health and human services to children, youth and families in the Wilkinsburg area. The ultimate goal is to provide education and inspiration to the children of Hosanna House, many of whom are Black or Brown.

“We wanted to give our children STEM learning, and also teach them about their heritage as African American children,” she says.

The Tuskegee Airmen were the first Black aviators in the Army Air Corps. Trained at the segregated Tuskegee Army Air Field in Alabama, they flew more than 15,000 individual sorties in Europe and North Africa during World War II. This was at a time when segregation was still common practice in the Armed Forces, and young African Americans who aspired to become pilots were met with one obstacle after another. Those who served in the military were limited in what jobs they could do. 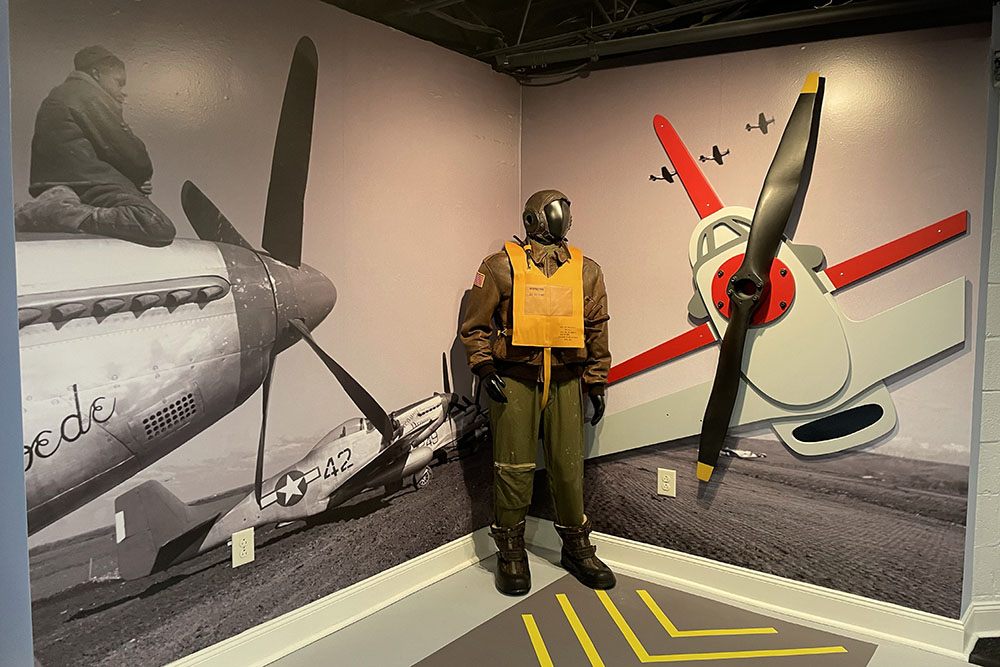 The decision to admit Black Americans to the Air Corps was both precedent-setting and experimental, according to one of the exhibits. Civil Rights advocates cheered the move, but the Army considered it to be an unwelcome departure from tradition. Many thought it would fail — some even hoped that it would. But instead, it became one of the most successful escort fighter groups in wartime history.

“The Tuskegee Airmen fulfilled a legacy of decades of African American aviators,” reads one of the exhibits. “As the first corps of Black military aviators, they would bear the burden of proving that African Americans indeed possessed the skills to fly modern warplanes and to serve their country.”

As Nelson puts it, “they were fighting for America at home and abroad.”

The museum also includes an exhibit about the Double V Campaign, a Black American initiative led by the Pittsburgh Courier newspaper that aimed to achieve a “double victory” during World War II. The two objectives were victory against fascism in the war abroad and victory against discrimination at home. Despite getting its start in Pittsburgh, the campaign quickly spread to Black communities across the country.

Leon Haynes, founding CEO and President of Hosanna House, adds that the museum is for everyone, even though it focuses specifically on African American history and heritage. There are ample opportunities for play in the space — an airport play table, a flight simulation lab, wearable wings, imagination mirrors, a cockpit fight trainer and more — but ultimately, the goal is to inspire the next generation of Black achievers. 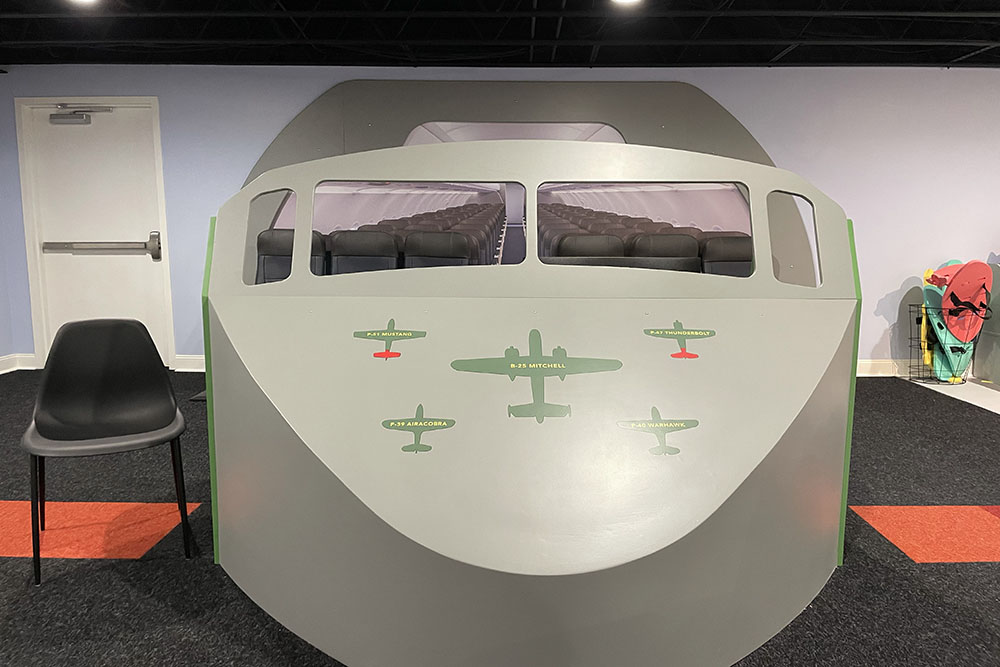 Exposure to CATT, Haynes says, can lead to pathways in education and job opportunities, encouraging children to obtain two-year degrees in aviation-related programs from trade schools and colleges like the Pittsburgh Institute of Aeronautics, Community College of Butler County and more.

Haynes says it’s important for kids “just to know there is a destination where they can be inspired.”

“People who look like them have achieved great things, so they and their children can do the same,” he says.

The soft launch, scheduled for 3 to 4:30 p.m. Thursday at the Event Center, will include a ribbon-cutting ceremony and remarks from speakers, including Haynes.

In April and May, it will open for Hosanna House afterschool programming, local school field trips and other special events, leading up to an official grand opening to the public on June 9. Beyond that, Nelson says it’ll host a range of summer camps — including a drone technology camp — that will serve up to 1,500 children.