This Week in Pittsburgh History: Great Fire of 1845

More than a third of the city and 1,200 businesses were destroyed and 12,000 people lost their homes. 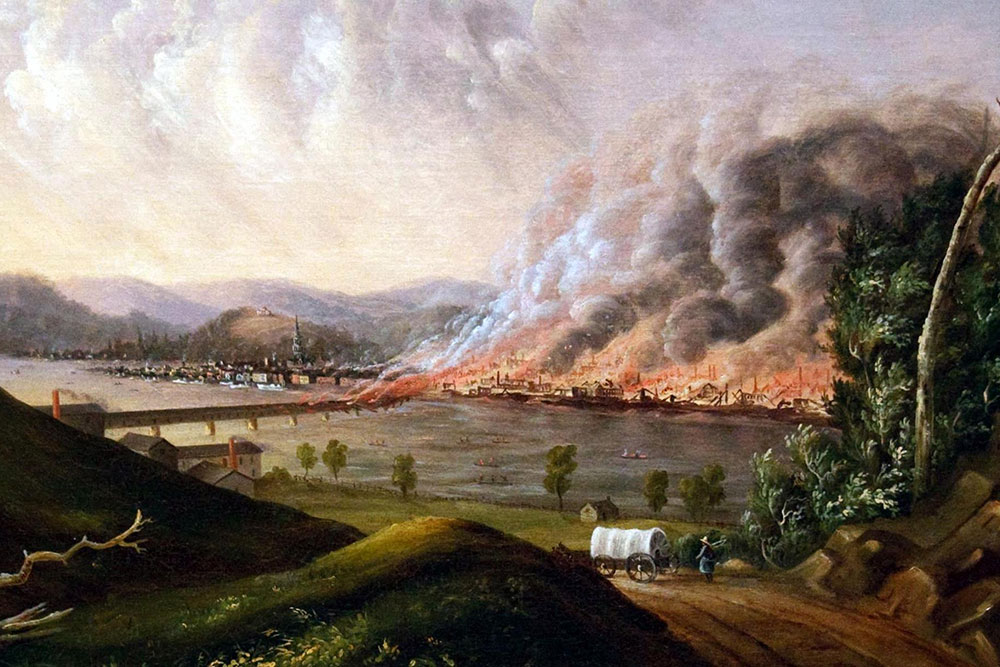 A century before Pittsburgh’s first renaissance began at the end of World War II, an event forever changed the city and its skyline. The Great Fire of Pittsburgh in 1845 destroyed about a third of the city and led to a monumental rebuilding effort that transformed the city and its surrounding communities. A small mistake started the fire that spread easily through blocks of tightly packed wooden buildings. Drought conditions and nearly empty reservoirs hampered efforts to get it under control quickly.

“It is impossible for anyone, although a spectator of the dreaded scene of destruction which presented to the eyes of our citizens on the memorable tenth of April, to give more than a faint idea of the terrible overwhelming calamity which then befell our city, destroying in a few hours the labor of many years, and blasting suddenly the cherished hopes of hundreds – we may say thousands – of our citizens, who, but that morning were contented in the possession of comfortable homes and busy workshops. The blow was so sudden and unexpected as to unnerve even the most self-possessed.”

The weeks preceding the Great Fire of 1845 had been unusually dry for spring, and April 10 dawned a very windy day. Legend has it that the blaze began around noon when Ann Brooks, who worked on Ferry and Second streets, lit a fire to heat wash water and briefly left it unattended. The gusting wind carried a spark to a nearby ice house, which quickly went up in flames. Driven by the wind and nourished by the tinder-like dryness and flammable soot, the fire quickly spread.

One publication called “The Mystery” described the conflagration: “The fire, as though impelled by the hand of the Destroying Angel rolled on from building to building, with the flight of a fiery flying serpent, consuming every house with the angry fury of a Vulcan, speeding its way with awful and terrific progress, threatening the whole city, inhabitants and all, and only ceased its mad career in the line of the river, because there was nothing more for it to destroy, having swept everything in its way for one mile and a quarter!”

By the next day, more than a third of the city, 60 acres, lay in smoldering ruins. The fire destroyed close to 1,200 businesses and left 12,000 people homeless. Total loss of close to $375,000,000 in damages! Relief effort came from far and wide. Miraculously, only two lives were lost. For a time residents despaired, but then they began to rebuild. In the aftermath, the price of property soared and the demand for construction materials revived the city’s industrial base and spurred the area’s recovery.