This Old Pittsburgh House: The Realtor’s Court On The Hill

The family of Dana and Duffy Hanna, president of Howard Hanna Financial Services, reside in the historical Norman-style estate in Fox Chapel. 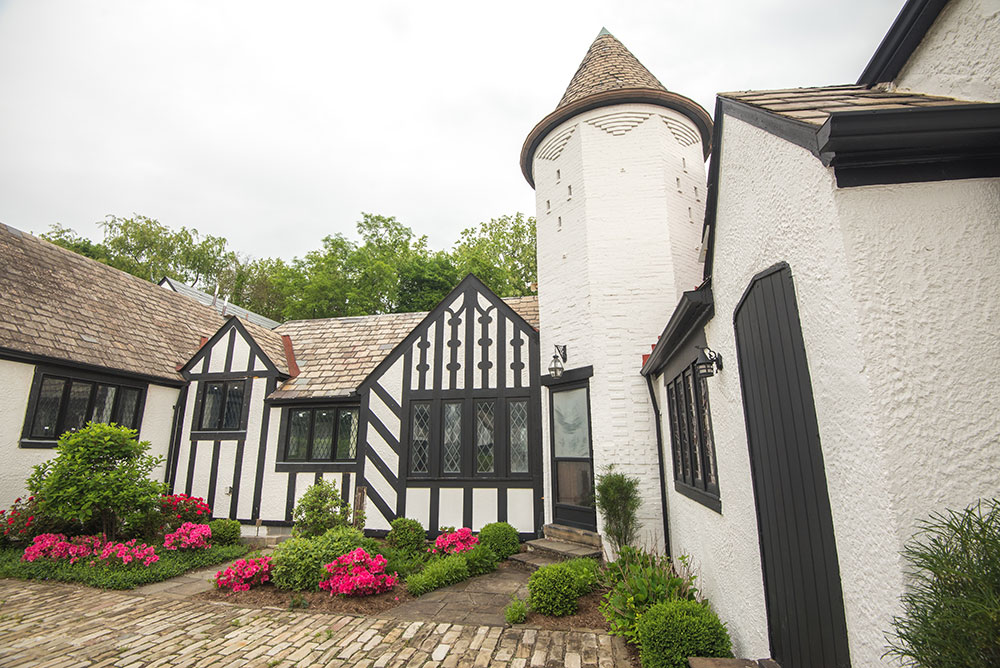 Handley Court, the hilltop French Normandy-style estate in Fox Chapel where Dana and Duffy Hanna are raising their three children, has many apparent charms.

Rustic and elegant, the sprawling seven-bedroom property at the top of Pasadena Drive has half-timbered white stucco walls topped with slate roofs and a jaunty ornamental turret. Built in 1923, it hugs three sides of a large central courtyard paved with granite Belgian block. Stone steps circling a fountain at the open end lead up to a walled formal lawn and gardens planted with several varieties of peonies. 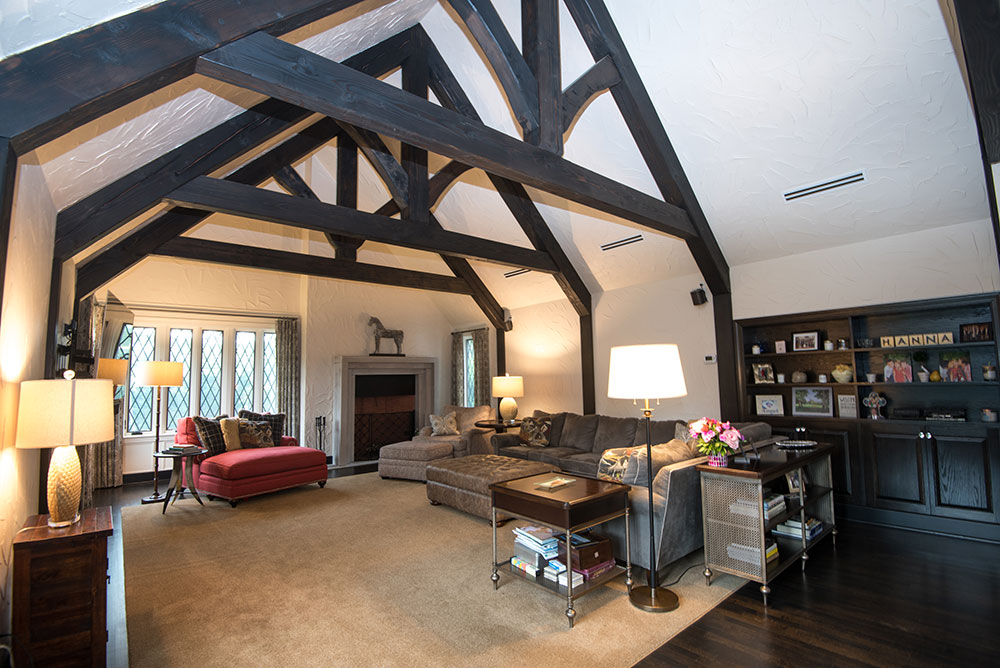 The sunken living room’s beamed ceiling rises 20 feet at the peak, but the vast space it covers is stitched together by wrought iron at either end. The decorative screen above the fireplace complements the railings at the foyer. It’s evident why the architect, Brandon Smith, had plenty of commissions, not only for country houses such as this one but for several country clubs.

But for all its appeal, warm memories prompted the Hannas to buy the place in 2013.

“I always say it’s one of the most emotional events of your life, buying or selling a home. It’s a lot more than a transaction,” says Duffy, the son of Pittsburgh real estate mogul Howard “Hoddy” Hanna III and president of the family real estate empire’s mortgage, title and escrow companies.

Duffy grew up in Fox Chapel, and his family were friends with Handley Court’s previous residents and often visited them. Fourth of July picnics were his favorite, as the lawn is an ideal vantage point to watch the borough’s two country clubs set off their competing fireworks.

Dana, cofounder of the local nonprofit Women Leading Women and national director for the Napa Valley winemaker One Hope, first saw the home during a baby shower held for her when she was 8 months pregnant with the couple’s first child. “This whole room was just pulsating with love,” the New Jersey native says. “I got really emotional looking around at all the faces of the people who were there with me, supporting and embracing me. So it just blows my mind that we live in this house now.”

Occupying a 99-year-old house has its challenges, such as bringing the home up to modern-day living standards without losing the original detail. “Having it still look historic with today’s tech – getting cable, for instance, or Wi-Fi — they weren’t thinking of that when they built this place,” Duffy notes. 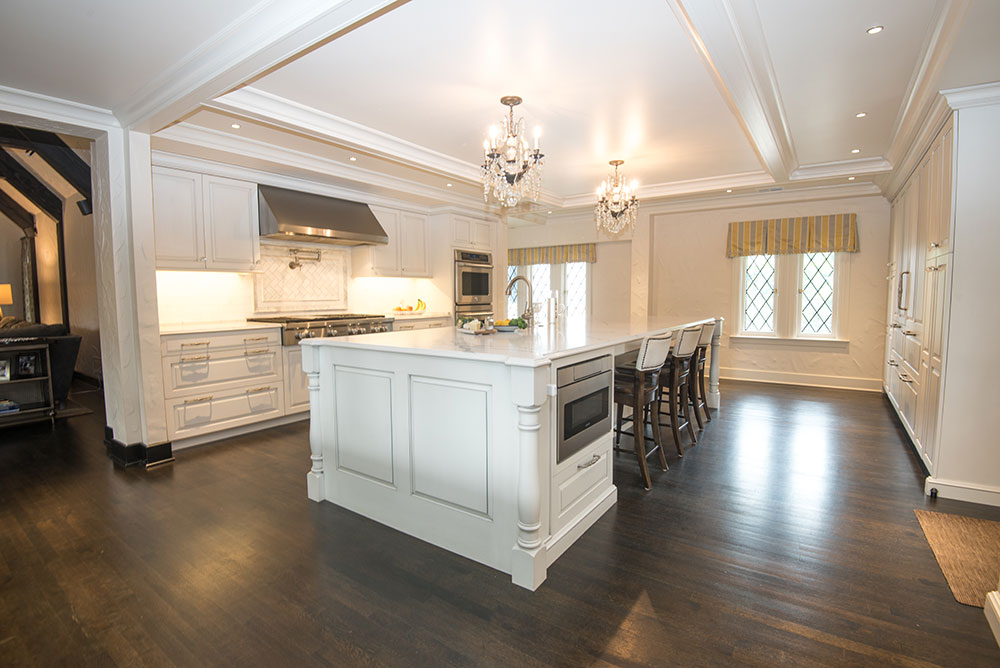 Each renovation, from the opened-up kitchen to a new family room to an ongoing ground-up rebuild and expansion of the main bedroom suite, has been finished with hand-done stucco interiors by knowledgeable craftsmen to match the original walls. Yet much remains as it always was, such as in the wood-paneled “boot room,” where a series of four stained glass windows depicts scenes from a fox hunt. 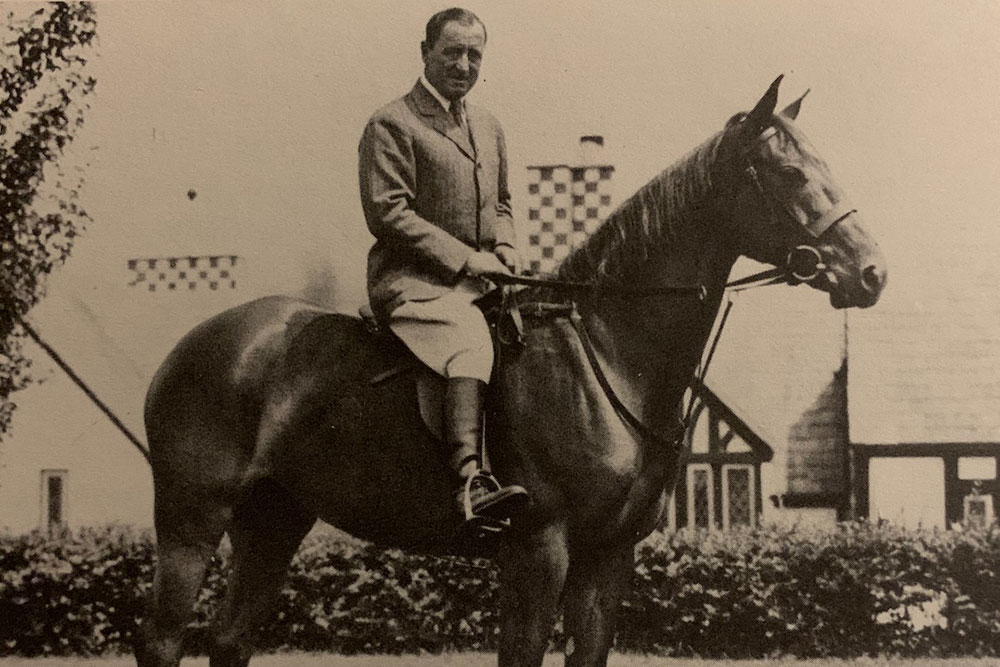 The hooves of horses did once clop on the cobbles of Handley Court. Original owners Dr. Edward and Margaret McCague raised three girls and three boys here, all trained in the equestrian arts. The oldest daughter, Peggy, placed third in a Devon Horse Show jumping event before reaching her teens, and their son Edward Jr. recalls riding his mount 4 miles north to the blacksmith shop in the 1987 book “Fox Chapel: A History of an Area and its People” by Frances Hardie. Edward Jr. also recalled the silver service and air of hushed formality in the dining room, which today still features its polished beam ceiling and colorfully tiled fireplace hearth. He added his stern father also loved to entertain guests, and he had a half-gallon cocktail shaker to prove it.

Dr. Edward McCague, the lord of the manor, had immigrated to Pittsburgh as a boy with his family from Yorkshire, England, under much humbler circumstances. His father, a laborer and eventual union organizer at the Homestead Works, died in an industrial accident, and the family was evicted from company housing soon after. 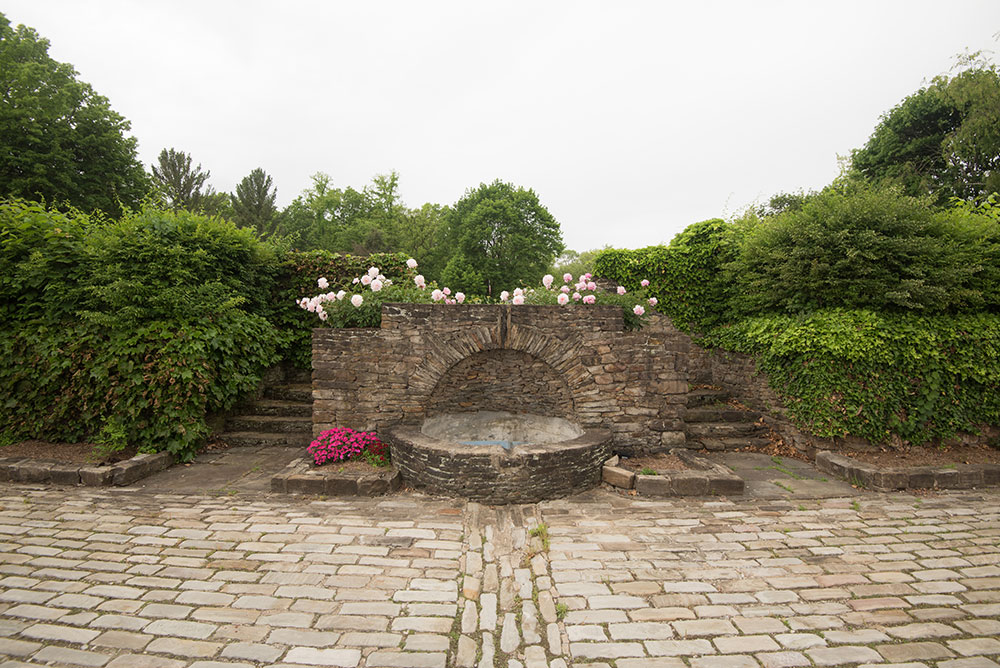 Penury set the resolve of Edward, the oldest of 10 children. He graduated from the University of Pittsburgh School of Medicine in 1912 and served in British and American army hospitals in World War I, where he specialized in treating pelvic injuries. He went on to found the department of urology at Mercy Hospital and became a professor at Pitt. In 1920, Edward, the son of a poor Carnegie Steel rabble-rouser, married Margaret McCook, the wealthy daughter of Henry Clay Frick’s attorney.

Edward and Margaret bought a house in Squirrel Hill but were soon intrigued by developments in O’Hara Township. Mostly scattered farms and dirt roads that wound past the occasional clandestine whiskey still, it was becoming a bucolic enclave for wealthy East End families. Pittsburgh Field Club, bumped from Regent Square after Frick ended its lease in 1914, moved there first and secured 171 acres for 18 holes. The private Shady Side Academy followed in 1922, transforming into a country boarding school. Fox Chapel Golf Club opened the following year, when the McCagues built their estate.

At first, they intended Handley Court as a summer retreat. But the lure of life as landed gentry with a ready retinue of servants proved too enticing, so they added a coal furnace and made the move permanent. In 1934, the McCagues and their neighbors made a more public declaration of their long-term intentions. Their vote to form a breakaway municipality left O’Hara Township cleaved in two.

Mark Houser is the author of MultiStories: 55 Antique Skyscrapers & the Business Tycoons Who Built Them.

This article appears in the July 2022 issue of Pittsburgh Magazine.
Categories: From the Magazine, HOME + Design, Hot Reads