This Old Pittsburgh House: The Odd Fairytale House on Route 28 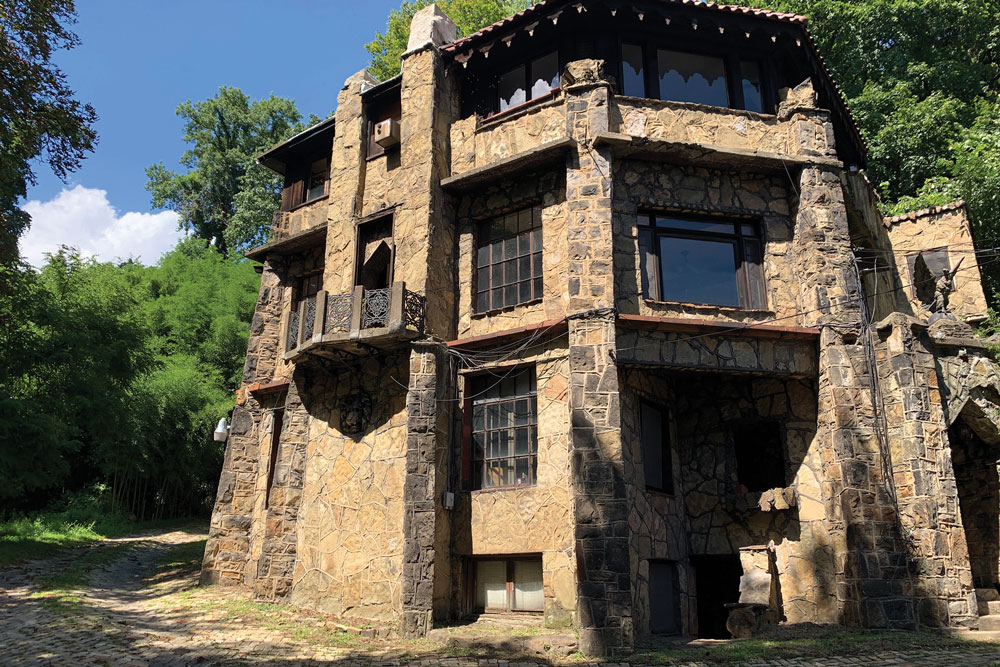 On an Aspinwall hillside, a fairytale compound of odd stone and concrete buildings seems to hide behind a wall of trees from the commuters barreling by on Route 28.

Its architect, a German immigrant named Frederick Sauer, is best known for prominent local churches he designed around the turn of the century. His work includes St. Mary of the Mount on Mt. Washington, St. Stanislaus Kostka in the Strip District, St. Mary Magdalene in Homestead and Millvale’s St. Nicholas Croatian Church, with its Modernist murals by Maxo Vanka.

In 1898, Sauer bought the 3½-acre property on Center Avenue in Aspinwall and built a large brick house with a carriage house in the rear. In between commissions, he also ran a local real estate development company.

As he was closing in on his 70th birthday in 1928, Sauer started playing around with his chicken coop. Completely reimagining the humble structure, he reinforced it with concrete and faced it with irregular sandstone slabs and terracotta reliefs of a lion and Benjamin Franklin. An experienced mason, Sauer worked his mortar joints here seemingly as the mood struck him — some flat, others raised, still others daubed on as if with a tablespoon. Around a hipped tile roof, he hung eaves of wood gingerbread trim. In front of it, he planted an arched stone gate with an eagle perched on top.

One of Sauer’s past jobs was designing the former Allegheny County Workhouse prison in nearby Blawnox. Supposedly because of this, he got help from inmates with his construction project. In any case, Sauer’s chicken coop eventually became the Heidelberg, a three-story apartment building that would appeal in equal measure to Rapunzel or Dr. Seuss — or possibly a bridge troll.

A road of zigzagging bricks wraps around on the hillside it straddles, providing ground-level entrances to each of the three floors. Inside, there are more stone slab accent walls and fireplace hearths, while beamed ceilings and ingenious nooks and archways add to the medieval atmosphere.

The old architect designed and built several more residential structures in the same whimsical vein around the property before his death in 1942. His son sold the eclectic ensemble a few years later to a cement contractor named Joseph Noro and his wife, Mary, who had both emigrated from the Alpine foothills of Italy.

“They fell in love with it,” says their grandson, Joe Noro, mayor of Aspinwall. “It reminded them of the old country: This is what we left, this is what we want.”

Giving a tour, Noro recounts fond memories of living in the Heidelberg — the bottom floor unit as a young man just out of college, the top with his new bride. His father, Mario, was also a cement mason, and he taught his sons how to make repairs to the place. In 1985, the eccentric complex was added to the National Register of Historic Places as the Sauer Buildings Historic District. Sauer’s original home and carriage house also remain, and now serve as rental properties.

But time is catching up with the buildings — and Noro is a plant manager at a dairy, not a cement mason.

Still, he, his brother and his son have been making major renovations to the Heidelberg in an effort to stave off the cracks. It’s not a small job. A cottage higher up the path with a two-story staircase castle tower has been vacant for a decade and is now undergoing repairs.

Mario died in 2015, and last May his wife, Udilia, followed him. Before she passed, Noro says she had a request for him and the other relatives: Find a new owner for Sauer’s creation. “We need someone to come in and cherish it as much as my family has,” he says.

This article appears in the October 2019 issue of Pittsburgh Magazine.
Categories: From the Magazine, HOME + Design

House of the Week: A Luxury Condo on Mount Washington