German immigrant Oswald Werner, the owner of an early (and explosive) dry-cleaning business, built this 17-room Victorian in 1890 in Highland Park. 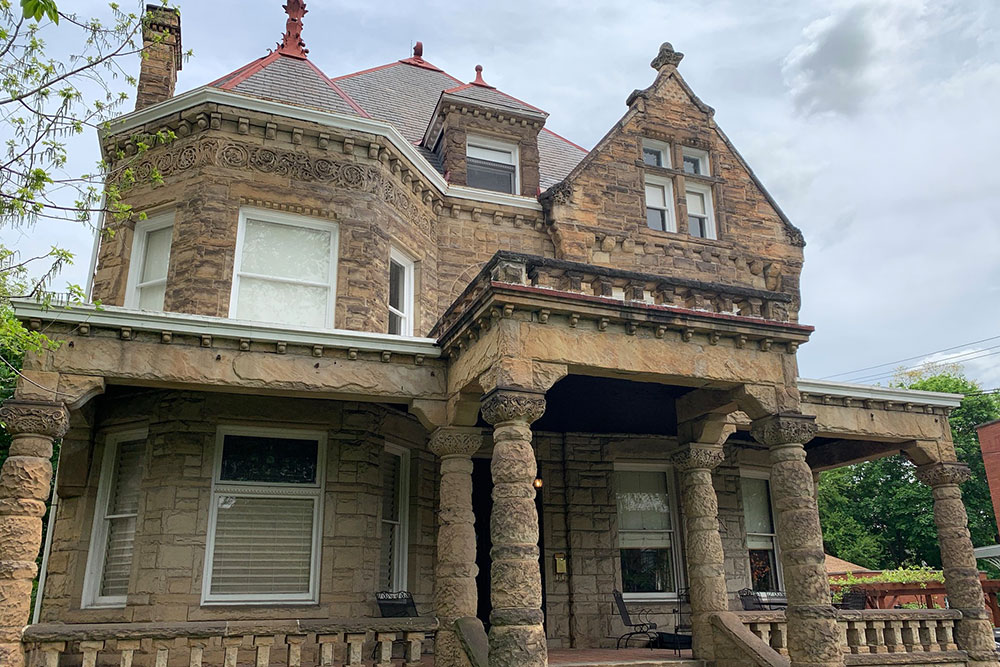 There was a time when you could make a lot of money in dry cleaning. The handsome house on North Highland Avenue — with its carved, colonnaded stone porch and facade — is proof.

It is also a monument to the success of Oswald Werner, a German immigrant who bought the lot in Highland Park in 1890 and set about building what one newspaper report of the time described as a “magnificent edifice.”

That year, the name of the neighborhood and its main street were officially changed from Hiland, which came from the original surveyor, Robert Hiland, to Highland Park. At the time, Pittsburgh was building a major park around the reservoir; the newly renamed neighborhood quickly became a desirable streetcar suburb. 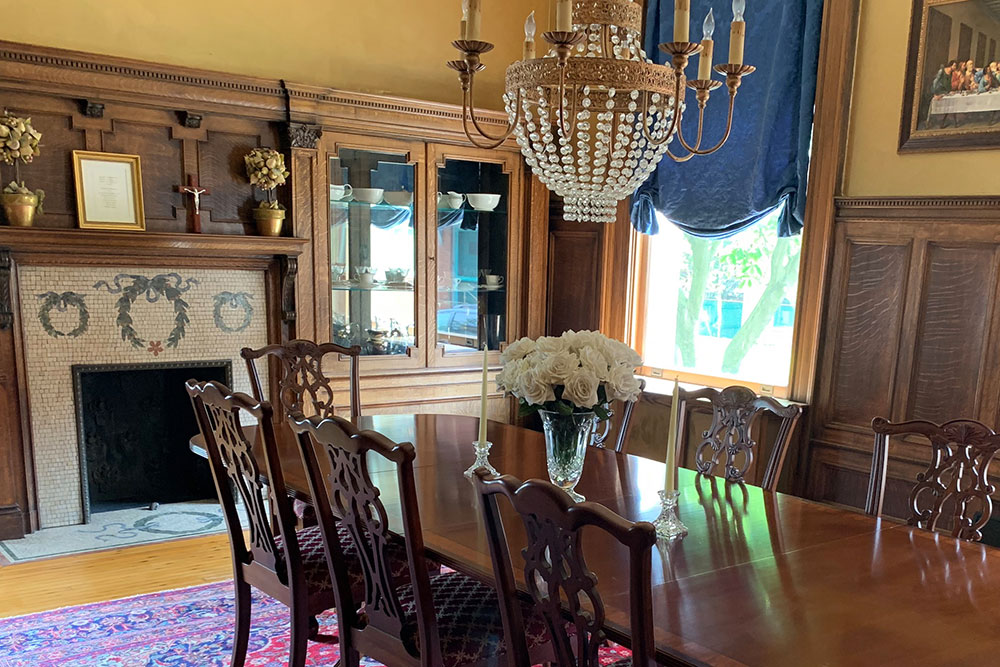 Werner had in 1864 started a Downtown business cleaning and dyeing clothes, specializing in wool, silk, velvet and other materials that detergent and water tended to ruin. He married a Bavarian immigrant, Catherine Stadler, and the two had a big family, with five girls and two boys packed into a house behind their shop on Penn Avenue (roughly where the WQED-FM studio faces Katz Plaza today).

But their house must have become unbearable after the Werners’ youngest daughter, 15-year-old Stella — “a bright, intelligent, lovable girl,” reports said — fell ill in the winter of 1890 and died at home. Within months, the Werners were headed for the East End.

With his sons, John and Oswald Jr., Werner opened a second dry-cleaning location at the corner of Bryant and Mellon streets in Highland Park. They soon expanded to a three-story dry cleaning plant, part of which remains today, albeit reconfigured as the industrial-chic Bryant Lofts.

Back then, dry cleaning was a hazardous business. Early practitioners used petroleum-based solvents such as kerosene and benzene. An explosion at Werner’s Bryant Street business in 1893 caused a small fire that was quickly brought under control; a decade later, the plant suffered two major fires only two months apart. Nobody was badly hurt in the blazes, though Werner took a significant financial hit each time. As it turned out, insurance was difficult to obtain for buildings that housed large fuel tanks prone to explosion. 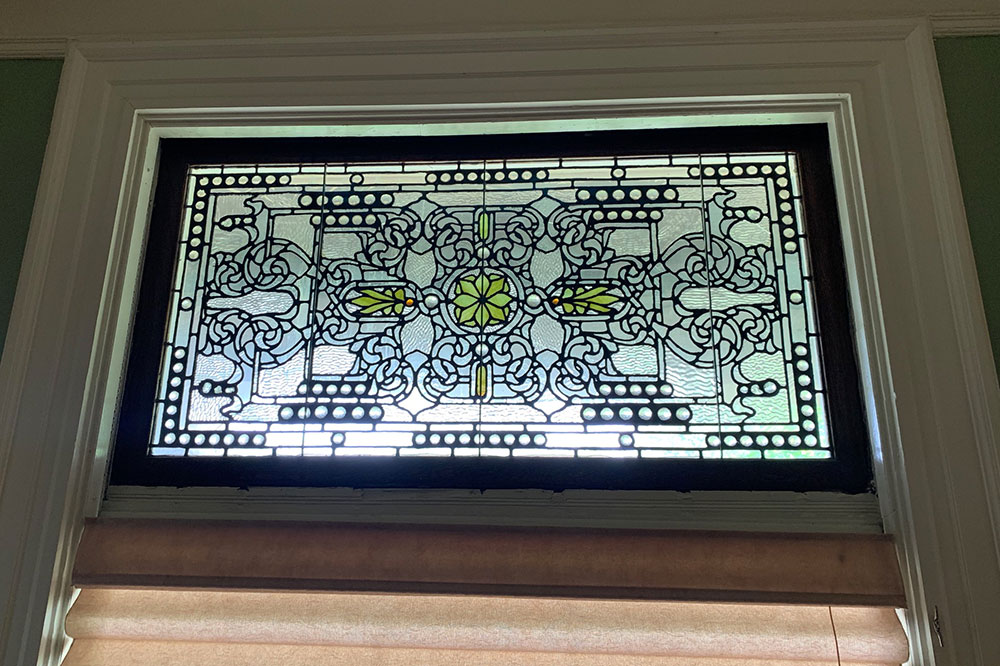 At the age of 70, Werner was still being driven daily by a chauffeur to his original dry cleaners Downtown. That ended in 1905, when they were in a serious accident on Bigelow Boulevard; Werner was thrown 20 feet from the crash. He survived but was badly injured. He died in 1912.

Oswald Jr. inherited the house on North Highland. He lived there another three decades with his sisters, Annie and Katie, becoming president of the dry-cleaning business, which remained in family hands for two further generations. The house did not, changing hands several times over the years.

In 2004, attorney Jennifer McPeak and local landlord Ken Kaczmarek bought the house after it went through foreclosure. For newlyweds expecting their first child, it was a tense transfer. While they were closing, thieves broke in and tore out several stained-glass windows and fireplace hearths.

“I was worried if we waited any longer the staircase would be gone,” Kaczmarek recalls. 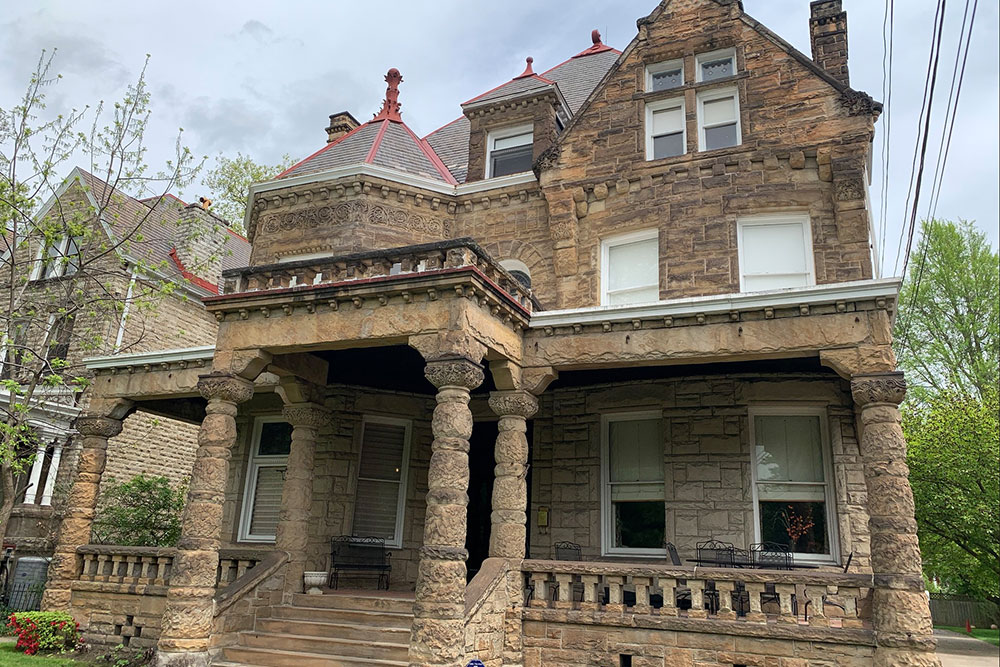 The stairs stayed, as did the oak cabinetry and mosaic fireplace hearth in the home’s showcase dining room. McPeak and Kaczmarek have deftly restored any decorative elements the police could not recover, and their 17-room, 2½-story, late-Victorian manor provides ample space for their four school-age children.

That means a lot to McPeak, who was born and raised in Highland Park. Her grandfather had a produce market a few doors down from the Werners’ dry cleaning business on Bryant Street. Like her mother and her sisters, and now her children, McPeak attended Catholic school at nearby Sacred Heart in Shadyside. She was the senior class president in 1989, the final graduating class of the high school.

“There’s a big family connection [to Highland Park],” she says. “My sisters still live here, too.”

She blushes when Kaczmarek reminds her their first date was a walking tour of Highland Park, organized at Tazza d’Oro coffee shop three blocks up from where they now live. Neighborhood ties can be stronger than a double shot of espresso.

Mark Houser is the author of the new book MultiStories: 55 Antique Skyscrapers & the Business Tycoons Who Built Them.

This article appears in the July 2021 issue of Pittsburgh Magazine.
Categories: From the Magazine, HOME + Design