This Old Pittsburgh House Has a Peacock’s View on Mt. Washington

The extravagant decor (and colorful history) of this turreted Grandview Avenue residence is matched only by its sweeping views. 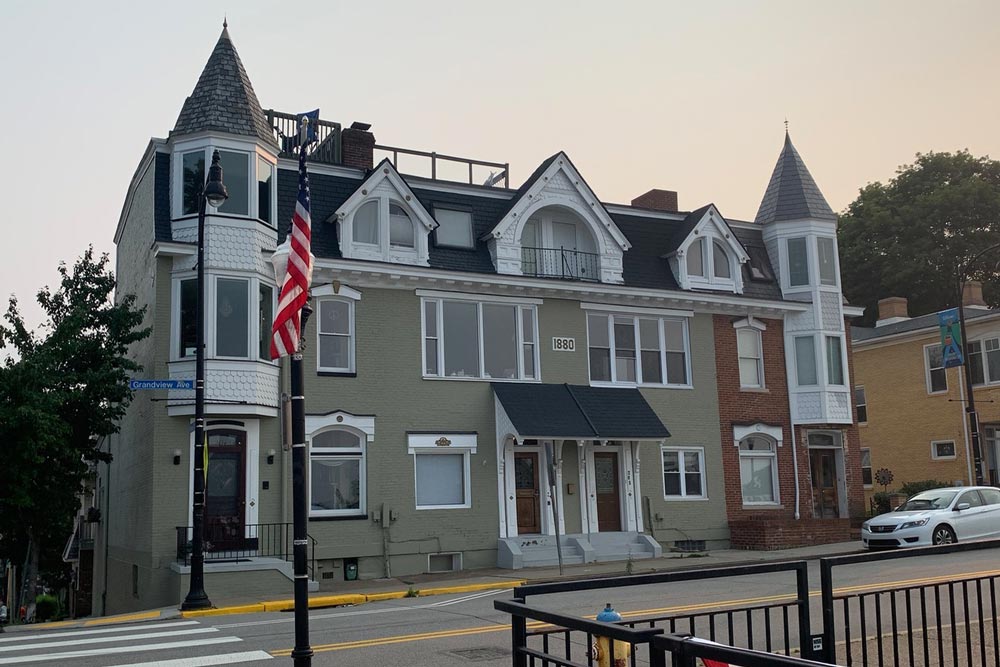 A taxidermied peacock by the front window of this Grandview Avenue residence has its gaze permanently fixed on the enviable skyline view.

Its owner, Anita Davis, focuses instead on the observation platform across the street — and keeps her camera handy. When Davis, 69, spots a wedding or proposal taking place — not uncommon on Mount Washington — she snaps some impromptu shots, then crosses the street to offer them to the couples as a gift.

That can be a longer journey than it sounds, as the photos are often taken from Davis’ rooftop deck, behind the three-story townhouse’s slate-shingled turret. But the New Jersey native, who bought the place in 2011 for a fresh start following a difficult divorce, remains an indefatigable romantic.

“I was born on Marie Antoinette’s birthday, so that’s what I blame for all my crazy, extravagant behavior,” Davis says. 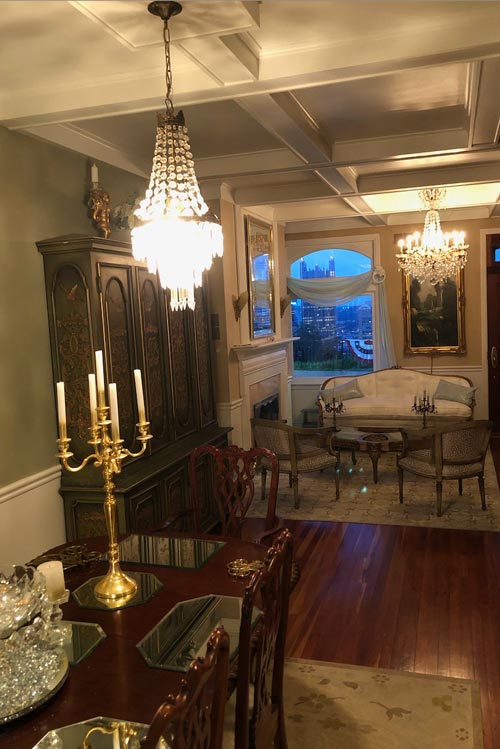 “I wouldn’t have married her if she were normal,” says her husband Mike, 73.

A lawyer who sometimes rides a motorcycle to his office Downtown, he jokingly laments leaving a big place with a pool in Mt. Lebanon in favor of their end of the four-unit brick complex. Twin-turreted and triple gabled, the handsome structure is painted olive green along three quarters of its length. A prominent block carved with “1880” marks the building as one of the oldest on the famous promenade. It was built just a decade after the nearby Monongahela Incline opened as the region’s first passenger funicular.

The townhouses were investment properties of Alfred Marland, a city politician and factory manager originally from England. He had been an engineer in a Manchester textile mill when the U.S. Civil War started and Union naval blockades choked off cotton supplies, leading to mill shutdowns and financial panic across industrial Lancashire.

Angered, Marland sailed for America to join the Confederate Army. His term of service turned out to be short and uneventful, and he soon changed plans and relocated to Pittsburgh. Marland started out manufacturing iron bands to bind bales of captured cotton the North was exporting, then took a supervisor job in Henry Oliver’s South Side bolt factory. 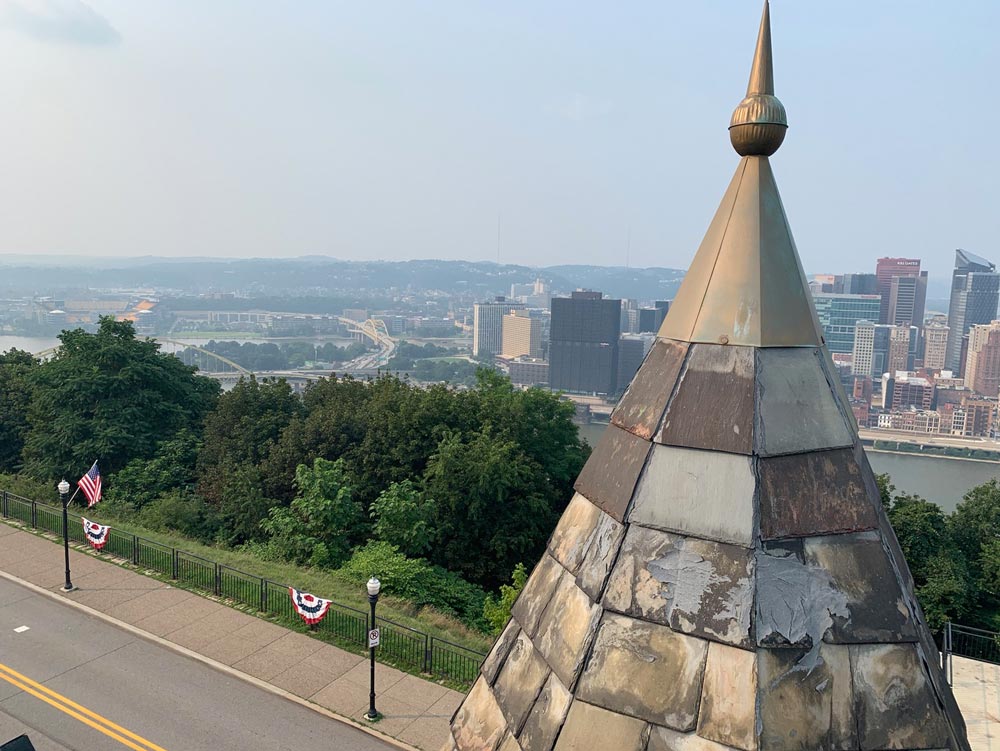 The former rebel soldier became a Republican councilman and prospered, with forays into natural gas and real estate. In 1888, he briefly entered a three-way race for state senator, but pulled out and settled instead for a seat in the state House.

Key to that decision was another Manchester immigrant, William Flinn, a construction contractor and one of the city’s main political bosses. The Pittsburgh Press chided Marland, “whose success in politics, such as it is, is said by his rivals to be due to a foreign accent and a resemblance to the Prince of Wales.” His party dropped him after only one two-year term.

The embittered ex-representative lashed back, decrying the Flinn machine’s corruption in an 1891 house judiciary committee hearing in Harrisburg. The boss system, he said, was “a stench in the nostrils of the self-respecting citizens of Pittsburgh, and the people want a change.” A decade later, reform-minded voters would toss out Flinn and his cronies.

In the 141 years since their construction, the townhouses have had many owners and even more residents. Celebrated restaurateur Steve “Froggy” Morris lived there for several years. Before him it was owned by John Schurko, a wealthy architect and dealer in European designer furniture, who in 1969 tried to warn city leaders that their new Point State Park was doomed to fail.

“I know of no successful dead-end park in the world,” Schurko declared at a news conference. 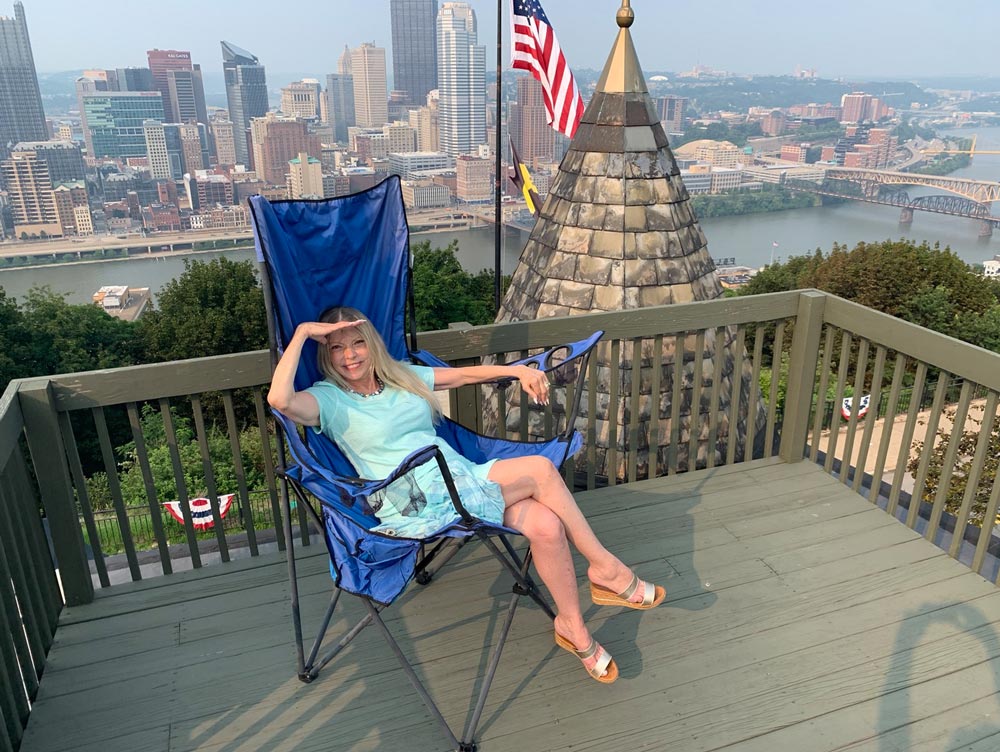 Instead, he pitched a plan to keep the two condemned bridges that met at the Point, putting a 350-room hotel on one and shops, galleries and a restaurant on the other. He further proposed a monorail to run along the old bridges, linking the park to the planned new Three Rivers Stadium. As for the fountain, Schurko contended it would be better to have it shoot straight up out of the river.

It all came to naught, as did a subsequent Schurko scheme to turn a hulking paint warehouse he owned at the foot of the Duquesne Incline into an entertainment complex. After three decades of neglect, the vacant property was demolished in 2001.

If Schurko had built his monstrosity at the Point, at least Anita Davis would be spared looking at it. She loves her Mt. Washington home, but she loathes the hillside trees that have grown so tall that she can no longer see the fountain. Not even from her roof.

This article appears in the Oct. 2021 issue of Pittsburgh Magazine.
Categories: HOME + Design

These Are The Things We Love This Winter