This Old Pittsburgh House: A Great Day at Vineacre

The site of many gatherings throughout the years, a bucolic estate in Edgeworth was once home to composer Ethelbert Nevin. 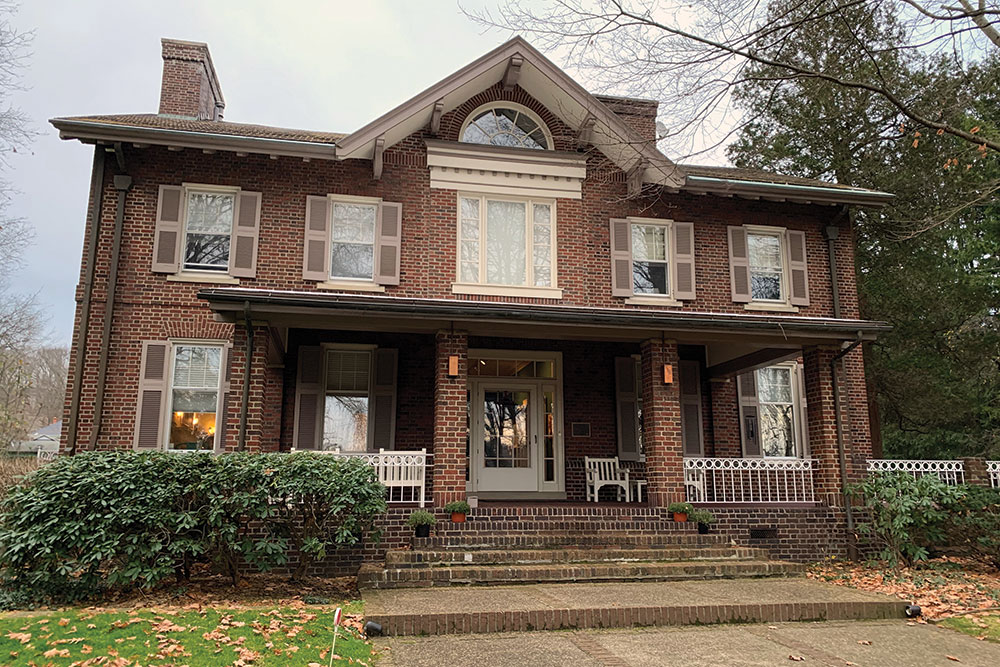 It wasn’t the historic plaque on the front porch that convinced Tom and Eileen McConomy to buy their house along Woodland Road in Edgeworth. Like most Pittsburghers, neither of them had ever heard of its former resident, Ethelbert Nevin.

Instead, it was the airy and light-flooded spaces, the 12-foot ceilings, and the privacy on an elevated plot that’s out of sight of Beaver Avenue that convinced them the five-bedroom brick house, built in 1861 and known as Vineacre, would be perfect for entertaining.

That was essential. Their children were grown, and Tom was then president, chairman, and CEO of Calgon Carbon. Soon his resume would expand further, as he joined the Carnegie Mellon University board of trustees, serving as chairman for four years. The McConomys are both Carnegie Tech alumni, and in the intervening years since they bought their house in 1987, they have hosted enough corporate and university guests to know they chose shrewdly.

They are not alone in recognizing the home’s suitability for parties. Willa Cather, before she became a novelist, was a reporter for the Pittsburgh Leader, which in the late 19th century was one of the city’s main newspapers. It was owned and run by Nevin’s father and older brothers, which is how Cather got to hear Ethelbert Nevin play in the home where he grew up.

“Sunday is a great day at Vineacre,” Cather wrote in 1900. “All the relatives and all their friends troop into the big, rambling old house, and Mr. Nevin plays and sings for them all day long.” They clamored especially for “Narcissus.” Of the hundreds of songs Nevin composed and published, the delicately lilting piano melody was his first hit.

“I first heard that graceful, tantalizing melody played as an encore at one of the Sunday night concerts at the Metropolitan Opera House in New York,” wrote Cather. “I have heard it played by string bands on the steamers that ply back and forth over the Great Lakes; I have heard it played on an organ at a school entertainment in a sod school-house in western Kansas, and once I heard it performed on sleighbells in a variety theater in Denver. You can hear it almost any night in London, in Paris, in Cairo, and a friend of mine once heard it on a mouth harp in a snow-banked cabin in the Klondike, played by a miner whose frozen feet were done up in bandages.”

In the fall of 1901, you could hear it at the Point, conducted by John Philip Sousa. It was the big finish for “The Pride of Pittsburgh,” a march Sousa composed for the opening of the city’s new music hall. Sadly, Nevin was unable to enjoy the moment. The classically trained pianist and married father of two had died that winter of a stroke at the age of 39.

Frail and anxious throughout his life, Nevin also battled depression and alcoholism. His wife, Anne, came from a prosperous Oakmont family and handled his bookings and business. She eventually was able to build a summer estate with fountains and gardens near Bar Harbor, Maine, on the royalties earned from her late husband’s sheet music sales. She also was instrumental in lobbying Congress to pass the country’s first major copyright legislation in 1909. Signing the bill was Teddy Roosevelt’s last official act as president, and Sousa sent Anne Nevin a signed copy of his memoirs thanking her for getting the bill passed.

Nevin’s youngest brother, Arthur, also became a composer, but never achieved his sibling’s success. Poia Road, a small street behind Vineacre, is named after a long-forgotten opera he wrote after living among the Blackfoot tribe in Montana.

None of this is noted on the state marker denoting Vineacre and Ethelbert Nevin’s history — though if it were, nobody could read it. The sign is next to a four-lane section of Ohio River Boulevard, where traffic never slows below 40 mph. A better location might be found two blocks north on Beaver Avenue, where people could read it while sitting in a covered bus stop built by the family that owned Vineacre after the Nevins. Charles Doyle was a coal executive who had Vineacre’s wooden walls replaced with brick. The Doyle children built the bus shelter for their mother, Virginia, who outlived Charles by almost 40 years before passing away in 1975 at the age of 101.

Besides extensive renovations, plumbing, and rewiring, the McConomys also converted the attic into a yoga studio, where Eileen held classes for many years. Tom’s old roommate at Carnegie Tech, Alfredo De Vido, designed several outbuildings, including an art studio for Eileen, whose tranquil floral watercolors grace Vineacre’s walls. De Vido also designed an atrium and a natatorium with even higher ceilings than the old house it adjoins. The tree-shaded grounds also are home to sculpted koi and goldfish ponds filled with hundreds of denizens.

Grape vines edge the property, and lucky visitors might walk away with a sample jar of homemade jelly concocted under the McConomys’ own “Vineacre Heritage” label. “Tom picks the grapes and squeezes them, and I cook it up—it’s a big production,” Eileen explains. “We just kind of like to keep the name Vineacre going.”

Mark Houser is the author of the new book “MultiStories: 55 Antique Skyscrapers & the Business Tycoons Who Built Them,” available at Penguin Bookshop in Sewickley and on Amazon.

This article appears in the Jan/Feb 2021 issue of Pittsburgh Magazine.
Categories: HOME + Design