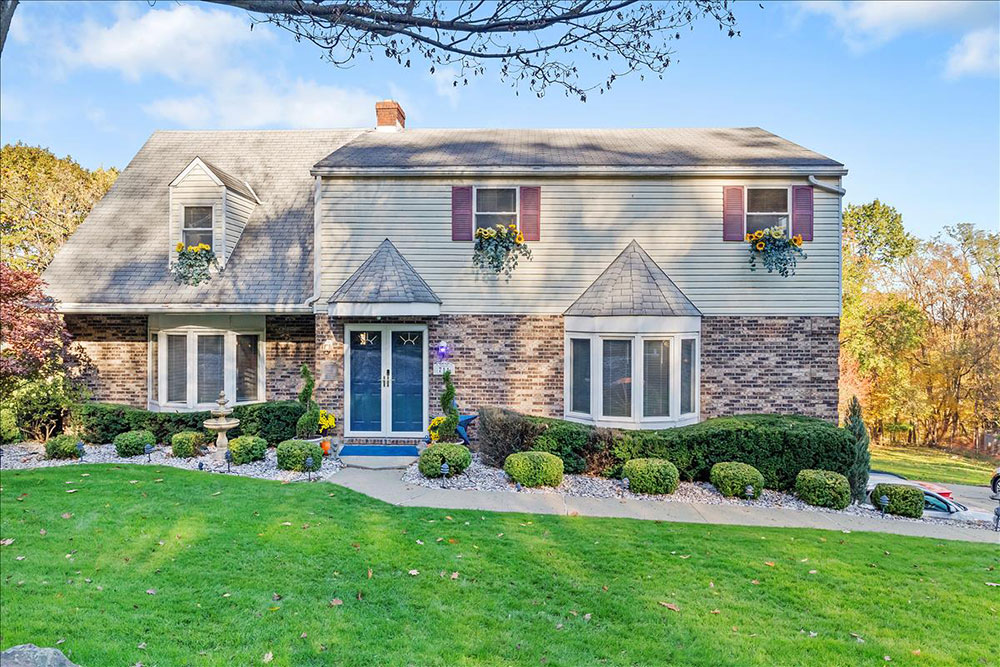 Sometimes the house of your dreams requires vision and patience to make it a reality. That’s what Sandy and Dan Stehle learned when they purchased their home in October of 1985.

Located at 711 Baldwin Road in Robinson, the home was a local legend of sorts.

“This house was known as the ‘Little Yellow House on the Hill,’” Sandy says. “It was built in 1958. It was a 1½ -story Cape Cod, and the family that lived in that house raised four children there.”

Sitting on 2 acres, its colorful history includes usage as a fruit farm, a horse farm and a chicken farm — in that order. Sandy says that when the Kowalski family bought the property in 1965, the Little Yellow House on the Hill became a residential property once and for all. 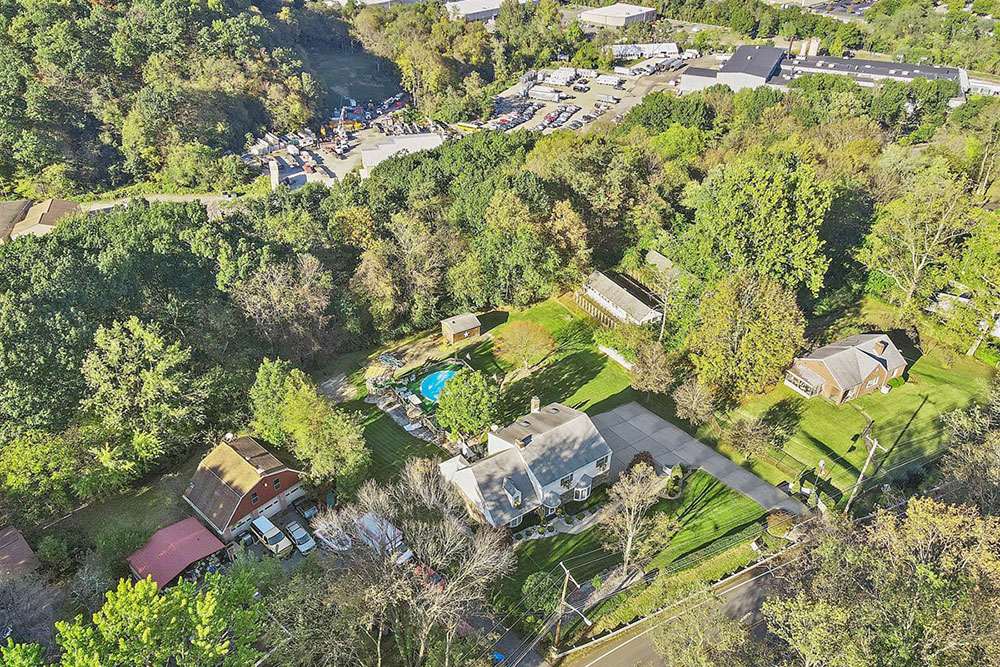 In 1992, the Stehles took on a massive remodel of the home, doubling its original size and expanding the outdoor living to include a pool and a gazebo. The home now has four bedrooms, 3½ bathrooms and more than 2,600 square feet of living space — too much for these empty nesters.

The home’s exterior is brick and siding, and its Cape Cod roots are evident from the original home’s shell, which was left intact on one side. After the couple added on to the right side of the home (the build was done by Dan, his father-in-law and other contractors), they broke through the exterior wall to join the addition to the house and then remodeled the original home into an expansive living space. 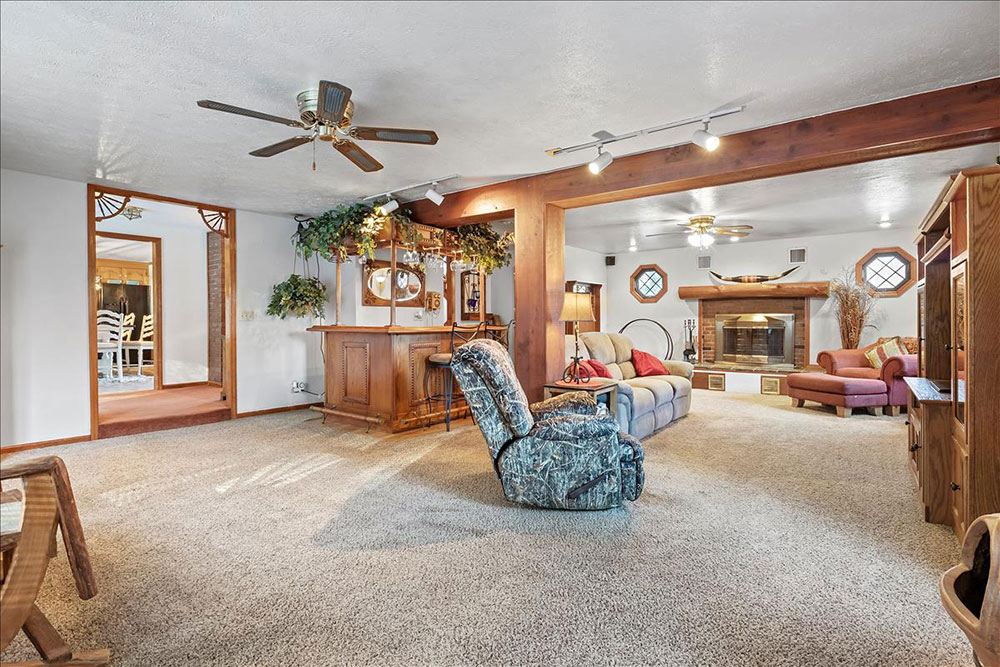 The entry is now through a double-panel front door that includes a pair of all-glass storm doors. They flood the main entry and hallway with light. Once inside, you can see the original brick chimney in the entry and wide passageways to the interior living space. A combination of carpet and tile make up the entry floor.

To the left, the original home’s dining and kitchen has been incorporated into one large space that measures a generous 36-by-20 feet combined. The couple love cheery colors and the beach: It is a theme throughout their design choices, and a story that the effervescent Sandy loves to tell in every room with her decorating choices. 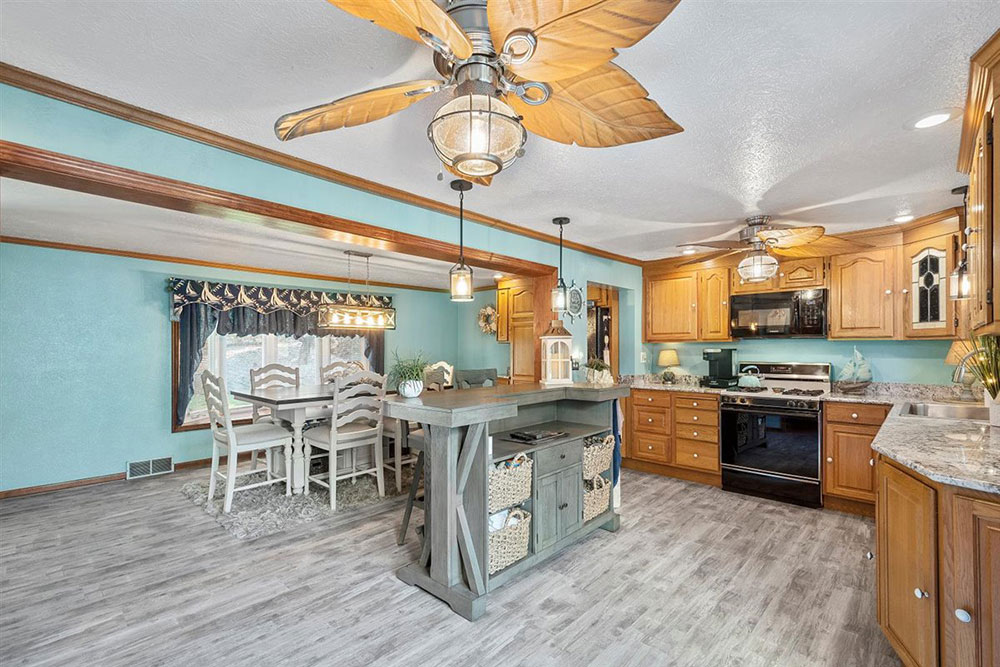 Natural woodwork, plus walls painted in a light teal, bring a pop to the kitchen. A movable island seats three and the expansive open space allows for seating to be placed in a number of spaces. The laminate floor is a modern gray tone.

Newer farmhouse-style pendant lighting and gray-and-white granite countertops make the kitchen ready for a quick paint update if anyone wants to change the space to a neutral color scheme. 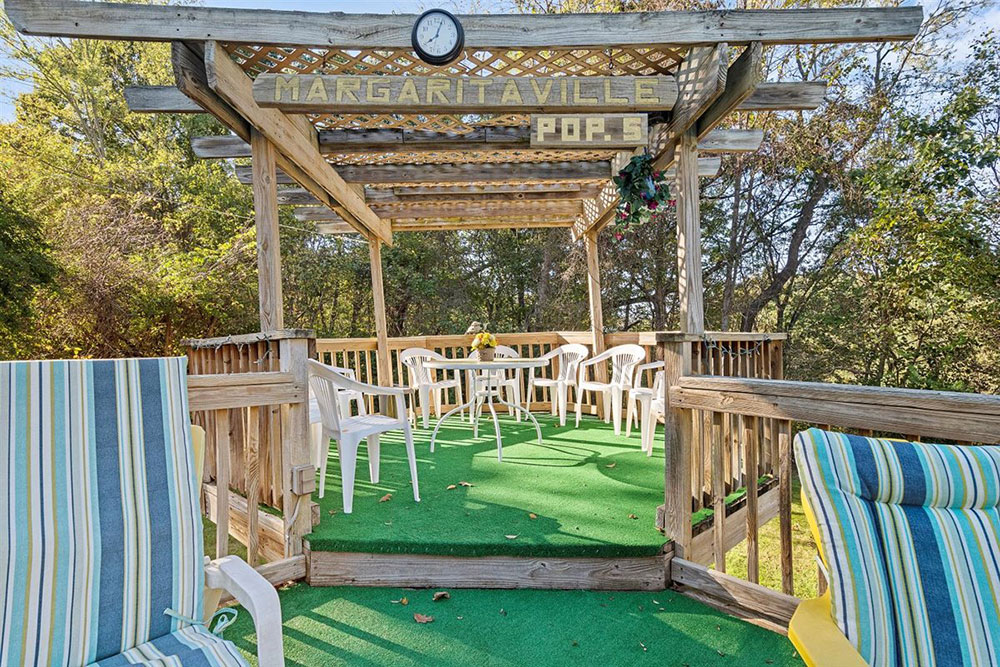 Across from the entry, the 30-by-22-square-foot family room is filled with lots of nice features, including large wood beams and pillars. A wood-burning fireplace anchors the room at the far end.

“The fireplace is a Heatilator. The generated heat fills the first floor and up to the master bedroom,” Sandy says.

The room also includes a bar that the couple built especially for parties.

“We used to entertain 30 people in the house easily, and all the family parties were here because of the indoor and outdoor space,” Sandy adds. 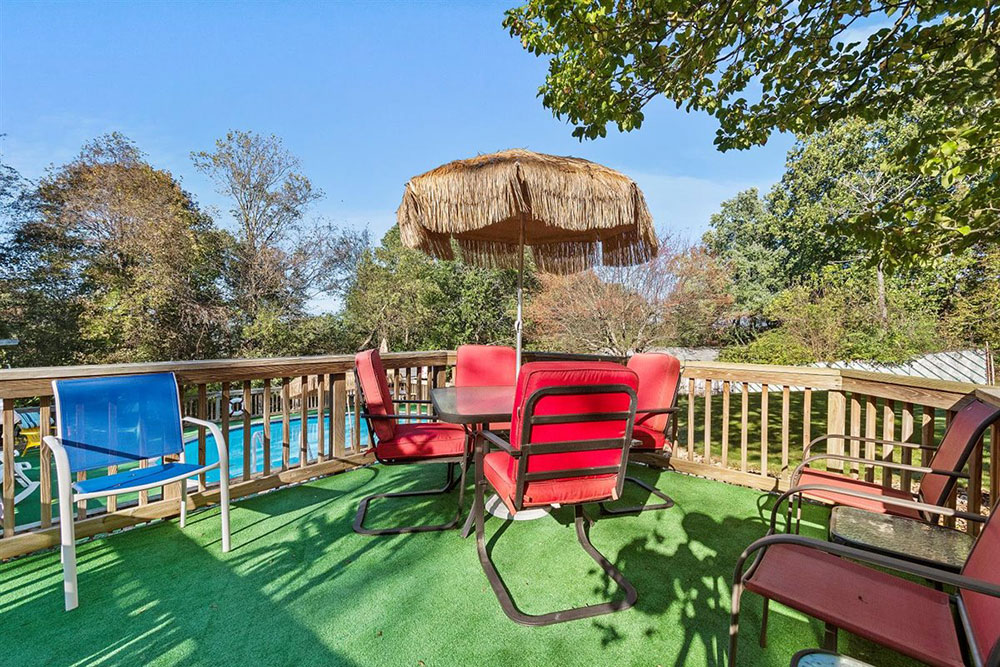 The first floor also includes a powder room with grasscloth wallpaper. The kitchen opens to a deck with a tiki bar theme. There’s also a shaded gazebo and plenty of seating. On the lower level is an additional deck leading to the fenced-in pool area.

The home’s lower level also features a finished 21-by-12-square-foot game room, plus tons of storage. Behind one set of louvered doors is a washer/dryer combo. The space walks out to a large shaded patio where the hardscape and a firepit are a nice respite from a day of swimming in the pool.

There is a two-car garage and a large driveway that fits six cars. Even with all that, there is still a great deal of yard surrounded by mature trees. 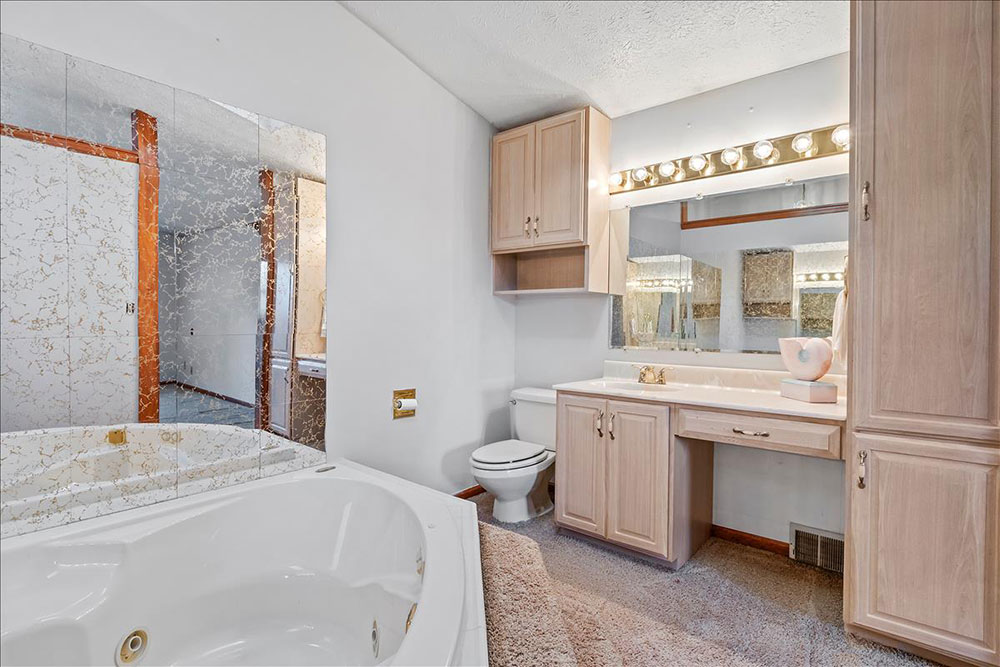 Back inside, the home’s second floor features four bedrooms, including a remodeled 16-by-14-square-foot primary suite with skylights and a bathroom equipped with a whirlpool tub.

The smallest of the other bedrooms is used as an office and has a feature wall adorned with a waterfall graphic that Sandy says has been pleasant to work by during these stressful pandemic times. The bedrooms are carpeted and filled with lots of light, thanks to a combination of skylights and/or windows. There is a full bathroom in the hallway. 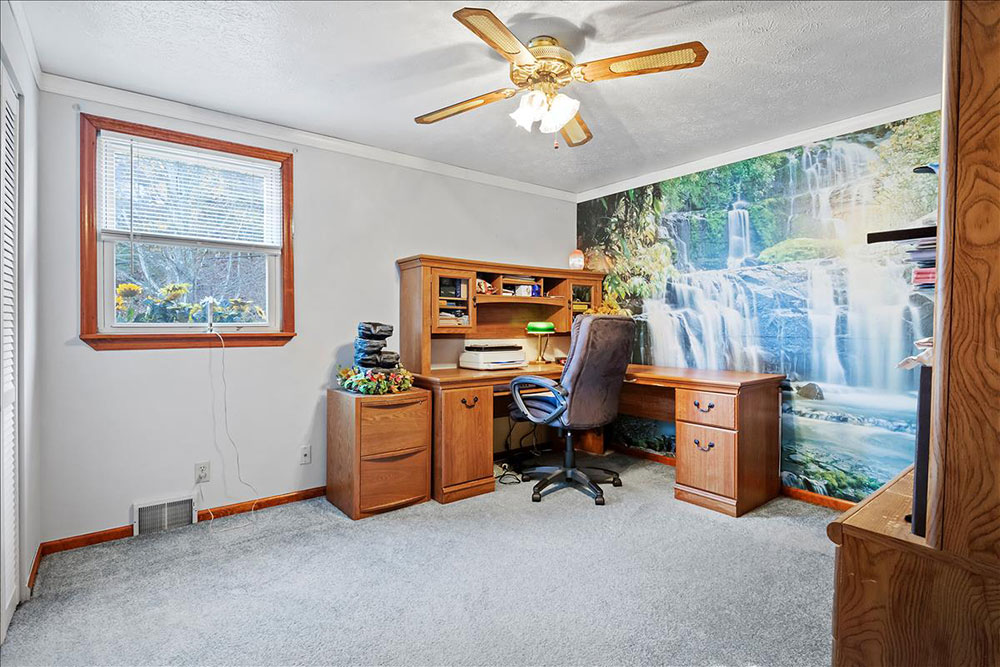 Sandy, who has for years worked in the Strip District, says the home’s location near Interstate 79 and Chartiers Country Club is perfect.

Something that stands out about the home is how clearly the Stehles loved it — and made it their own throughout the years.

“We made this house our oasis for the way we lived,” Sandy says. “In the end, we didn’t have to travel far because everyone traveled here to visit us. It was always a joy.”

Schools: Montour School District serves 2,894 students and offers an extensive curriculum and variety of extracurricular activities. It has the highest PSSA scores out of surrounding school districts.

Neighborhood: Suburban, wooded and just a short drive away from major highways, interstates and shopping.