See a titan of the Tony awards, head back to the era of gumshoes and fisticuffs and greatly improve your relationship with the recorder (the instrument — yes, really) this weekend. 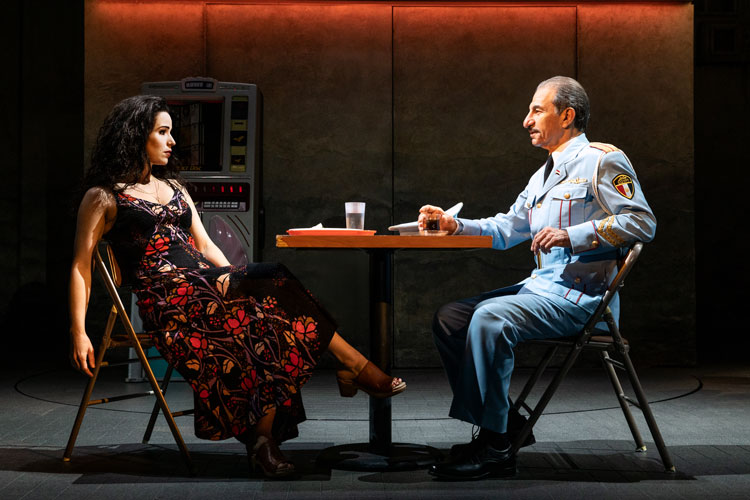 “The Band’s Visit” is like nothing else on this season’s Broadway in Pittsburgh calendar. It has none of the pop sensibilities of “Mean Girls” and none of the throwback Broadway bombast of “Miss Saigon.” It bears absolutely no resemblance to “Escape to Margaritaville.”

It’s a small, humble story; in a pre-show supertitle, it announces that its own tale “wasn’t very important.” A group of classical musicians from Egypt arrives in Israel for a gig, only to accidentally travel to a dot-on-the-map small town instead of the cultural center they anticipated. The show takes place over one night, with musicians mingling with the locals.

There aren’t grand global messages to “The Band’s Visit,” nor is there any simmering conflict between the guests and their hosts. (To levy a small criticism, there’s barely any conflict at all.) Rather, this unexpected development gives both the musicians and the locals a moment to reflect on their lives. The one-act show unfolds without anyone, on either side, meaningfully altering their circumstances in any direction.

Yet it’s a quietly, but undeniably, beautiful experience. The music is stunning, virtuosic stuff, and the show’s sense of place is staggering; with relatively minimal stagecraft, the fictional village is brought to such vivid life that I feel like I was there. “The Band’s Visit” may lack show-stopping hoopla, but it offers a lovely counterpoint to all those giant Broadway spectaculars.

By the way: Look for North Allegheny grad Mike Cefalo in the cast. He’ll be the guy waiting — for quite a while — at the telephone.

If music is the universal language, then the recorder is baby’s first word. Thrust upon our nation’s third graders along with the sheet music for “Hot Cross Buns,” the recorder has a surprisingly long history integral to how we use instruments today. Early music group East of the River features two renowned recorder artists; this month, catch their special performance of Near Eastern, Maqam-based music. (Note: This item was originally reserved for Celine Dion’s appearance at PPG Paints Arena, which has been postponed due to a cold. The diva will return in November.) — Cassidy Gruber

The script for “Khūrākī,” an original theatrical experience from Real/Time Interventions, is derived from conversations with Afghan women who recently settled in Pittsburgh. Creator Molly Rice asked a group of women to share their stories, then turned those tales into a script — which is performed as the women prepare, and serve, traditional Afghan cuisine to audiences.

The first run of “Khūrākī,” held a year ago, sold out well in advance of opening, prompting a revival. There’s a timely element to this second production: The women featured in “Khūrākī” are launching a catering company, the first Afghan-focused food business in the city. Get a taste of the fare during four performances at Millvale’s Christ Lutheran Church.

The next time someone makes the tired argument that Hollywood is too obsessed with remakes these days, here’s your response: “The Maltese Falcon,” that pillar of film noir and one of the consensus best movies ever, was a second remake. Its source material, a Dashiell Hammett novel of the same name, was adapted with middling results in 1931 and ’36 before the famous version hit. Three versions in just over a decade — not even Spider-Man gets rebooted that quickly. See the classic (the good version) alongside hard-boiled flicks “The Third Man,” “Pickup on South Street” and Akira Kurosawa’s “High and Low” this week at Row House Cinema.

Orchids here, orchids there, orchids everywhere at the Orchid Society of Western Pennsylvania’s annual Spring Orchid Show, this year titled “An Orchid Journey.” The show will feature crafted displays of hundreds of live, blooming orchids, free educational seminars and society members and expert orchid growers on-site. If you’re a novice looking to buy orchids or learn more, or you have orchids at home that need a little love, be sure to visit the sales area and the repotting table, which can help with all of the above. — Jesseca Muslin